WASHINGTON — Justice Antonin Scalia’s death deprives conservatives of a key vote that could change the outcome in some major Supreme Court cases, including one in which labor unions appeared headed for a big defeat.

Those are the most immediate effects on the court of the loss of its conservative icon and longest-serving justice.

It’s a firm Supreme Court rule that decisions are not final until they are handed down. So nothing Scalia did or said in pending cases matters to the outcome.

“The vote of a deceased justice does not count,” veteran Supreme Court lawyer Roy Englert said Sunday, a day after Scalia was found dead in his room at a west Texas ranch.

Subtracting Scalia’s vote from cases in which he was in the majority in a 5-4 split leaves the result tied, four a side.

The remaining eight justices have two options in that situation: They can vote to hear the case a second time when a new colleague joins them or they can hand down a one-sentence opinion that upholds the result reached in the lower court without setting a nationwide rule.

A second round of arguments seems less likely at the moment because a new justice may not be confirmed until the next president is in office.

A tie vote, by contrast, resolves the case at hand and allows the legal issue to return to the court at a later date when there is a ninth justice.

Public sector labor unions had been bracing for a stinging defeat in a lawsuit over whether they can collect fees from government workers who choose not to join the union. The case affects more than 5 million workers in 23 states and Washington, D.C., and seeks to overturn a nearly 40-year-old Supreme Court decision.

Now, what seemed like a certain 5-4 split, with the conservatives in the majority and the liberals in dissent, instead looks like a tie that would be resolved in favor of the unions, because they won in the lower courts.

“That’s a big loss. It was all teed up and it looks like it’s not going to go anywhere now,” said Brian Fitzpatrick, a Vanderbilt University law professor who once served as a law clerk to Scalia.

Another case in which there now seems little chance of finding a court majority to upset long-standing practice involves a conservative challenge to the way governments have drawn electoral districts for 50 years.

The court heard arguments in December in a case from Texas on the meaning of the principle of “one person, one vote,” which the court has said requires that political districts be roughly equal in population.

But it has left open the question of whether states must count all residents, including noncitizens and children, or only eligible voters in drawing district lines. 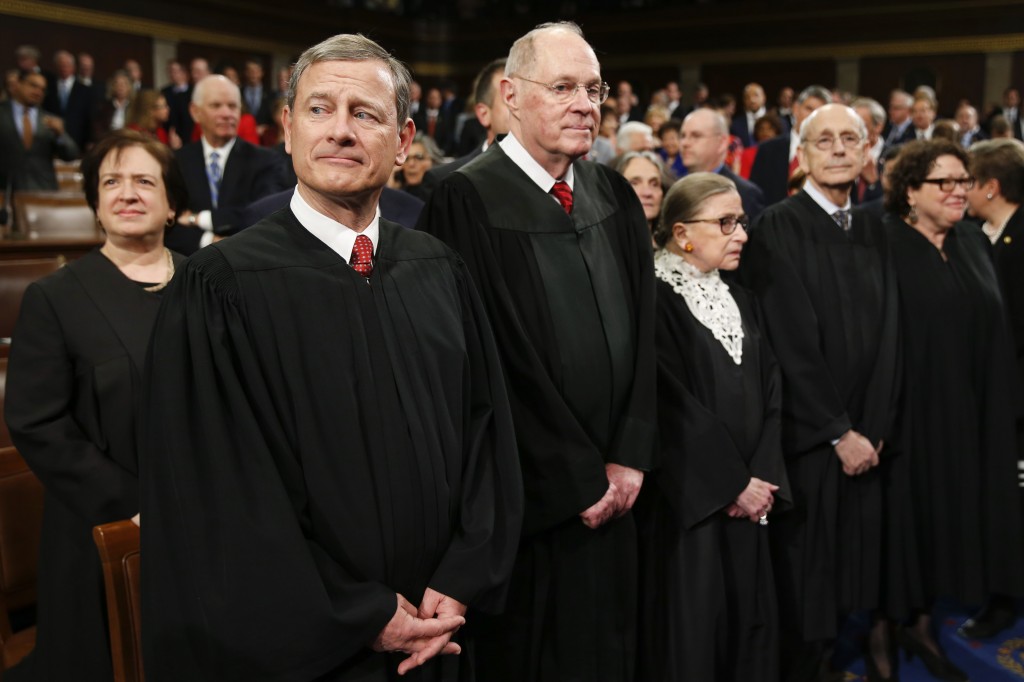 U.S. Supreme Court Justices, including Chief Justice John Roberts, arrive in the House chamber prior to U.S. President Barack Obama’s final State of the Union address to a joint session of Congress in Washington January 12, 2016.  Photo by Evan Vucci/Reuters

The court’s upcoming look at the health care overhaul will be its fourth case involving the 2010 law. This time, the focus is on the arrangement the Obama administration worked out to spare faith-based hospitals, colleges and charities from paying for contraceptives for women covered under their health plans, while still ensuring that those women can obtain birth control at no extra cost as the law requires.

The faith-based groups argue that the accommodation still makes them complicit in providing contraception to which they have religious objections.

A tie vote here would sow rather than alleviate confusion because the appellate courts that have looked at the issue have not all come out the same way.

Other big cases before the justices this term include affirmative action, abortion and immigration.

With Justice Elena Kagan out of the affirmative action case, the court still is more likely to rule, 4-3, in favor of a challenge to the consideration of race in admissions to the University of Texas.

On abortion and immigration, a 4-4 tie would sustain lower court rulings in favor of Texas’ regulation of abortion clinics and a Republican-led challenge to an Obama administration plan to allow millions of immigrants who are in the country illegally to avoid deportation and acquire work permits.