Seventy-one days ago, Hurricane Maria tore through Puerto Rico, bringing unprecedented damage to the island. As of today:

But there’s still a long way to go, officials say.

The Federal Emergency Management Agency has received more than a million applications for assistance and approved about 251,000 as of Nov. 28, a spokesperson said. Because of difficulties with cell service and internet on the island, that deadline has been extended from Nov. 30 to March 18.

In October, President Donald Trump signed a relief bill to help rebuild areas of the country damaged by natural disasters this fall, including up to $4.9 billion in loans to help Puerto Rico’s cash-strapped central government.

So far, FEMA has given more than $230 million in assistance to families and has set aside more than $464 million for reimbursing local authorities to rebuild public buildings and infrastructure. This money comes from FEMA’s Disaster Relief Fund. It’s unclear how much of that money Congress just appropriated and how much of it was in the fund prior to the hurricane, a FEMA spokesperson told the NewsHour.

Officials have said more aid will come. But when? And how much? Here’s what we know about what’s ahead for Puerto Rico’s recovery.

Damage on the ground

Trash and debris from the storm remain a rampant problem. The U.S. Army Corps of Engineers reported it has removed more than 639,000 cubic yards of debris. But it is still tasked with removing at least 2.7 million remaining cubic yards.

“There is trash and debris all over the place and it is more than an eyesore,” David Begnaud, a CBS News correspondent who was on the island earlier this month, told the NewsHour. “It’s a major issue,” he said, adding that the debris and trash exacerbate flooding.

Begnaud said power remains “to be everything” as the Army Corps repairs the electrical grid.

“Where there is power, it flickers,” he said.

He said the island will need $94 billion in disaster aid for infrastructure, housing and long-term recovery.

House Speaker Paul Ryan said Thursday that Congressional delegations from the disaster-hit areas were dissatisfied with the White House’s appeal.

Two weeks ago, the White House asked Congress to approve a $44 billion aid package for hurricane relief that would put the total for disaster relief at nearly $100 billion. The request, which would go toward all areas affected by natural disasters earlier this year, drew criticism from both sides of the aisle.

“This supplemental request fails to provide sufficient funding to help Puerto Rico address immediate needs and set itself on the road to recovery,” Democratic Reps. Jose Serrano, Nydia Velazquez and Luis Gutierrez, co-chairs of the House Hispanic Caucus, said in a statement.

House Speaker Paul Ryan said Thursday that Congressional delegations from the disaster-hit areas were dissatisfied with the White House’s appeal. Disaster relief funding would likely not be included in the stopgap spending bill to keep the government open, because it requires more time for discussion, he said.

“We do anticipate moving as quickly as we can, but we know a few days is not going to be enough. It’s going to take longer than that,” Ryan said. 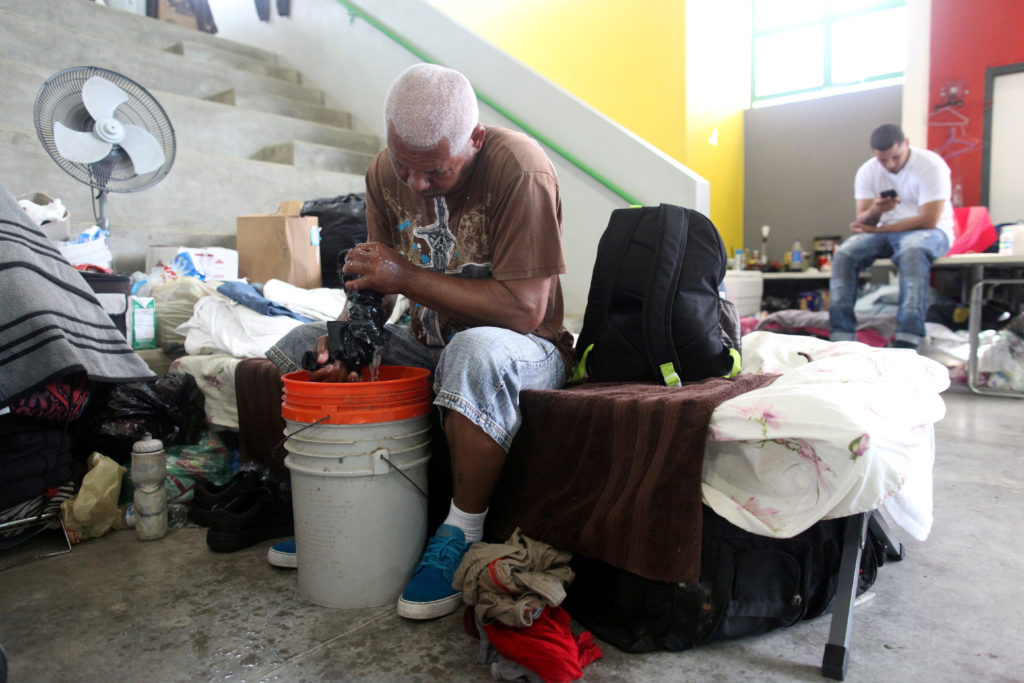 A man does his laundry Nov. 20 while sitting on a cot at a school turned shelter after he lost his home during Hurricane Maria in September. Photo by REUTERS/Alvin Baez.

San Juan Mayor Carmen Yulin Cruz, who has been critical of the federal response in Puerto Rico, lauded the legislation.

“The bill that Senator Sanders has introduced in the United States Congress is a comprehensive plan that provides the blueprint for the transformation of Puerto Rico,” Cruz said in a statement.

The package is unlikely to get a vote, analysts say.

Who controls the spending?

On Monday, Rossello announced the creation of an office that would give FEMA authority to review and approve all federal aid spending on the island.

“We want to embark on the most transparent, effective and efficient recovery process in the history of our nation,” Rossello said during a news conference.

The AP reported Tuesday that the federal government canceled $30 million in contracts earlier this month with an upstart Florida company that failed to supply directed aid to Puerto Rico. Bronze Star LLC was supposed to bring plastic sheeting and tarps to help with repairs on the island, but months after winning the contracts did not do so. The federal government did not pay Bronze Star.

This happened after Puerto Rico cancelled its contract with Whitefish Energy after members of Congress and FEMA had raised concerns over how the deal to restore the power grid was reached and demanded an investigation. The company had just two employees when the hurricane hit. But rebuilding the power lines “requires the work of thousands of people,” The New York Times reported, adding that six weeks after the hurricane, the majority of the island was still without power. FEMA warned it might not cover the cost of the contract if it continued, the Times reported.

On the island, Gov. Rossello is saying he wants all power restored by Christmas. A majority of schools do not have power, and students study by sunlight.

Meanwhile, more than 200,000 people from Puerto Rico have arrived in Florida since Maria hit, according to the Florida Division of Emergency Management.

FEMA is now moving from response to recovery mode. FEMA is still providing daily food, fuel and water to survivors of Maria, the longest such sustained distribution after a disaster in FEMA history, FEMA federal coordinating officer in Puerto Rico Mike Byrne said Monday. But it’s not clear whether Congress will act on more disaster relief funding — for Puerto Rico or otherwise — before the year is out.

Editor’s note: This story has been updated to clarify the reasons why the Whitefish Energy contract was canceled.

Left: A man participates Nov. 19 in the Unity March to highlight the ongoing humanitarian and natural disaster crisis in Puerto Rico, at the Lincoln Memorial in Washington, D.C. REUTERS/Yuri Gripas.