‘As ugly and divisive as it was for Kavanaugh’: Midwest voters brace for Supreme Court fight

MILWAUKEE — As Washington readies for a bruising Supreme Court nomination battle just weeks before the election, Jamie Kyser is following the news with a growing sense of alarm.

If Senate Republicans fill Justice Ruth Bader Ginsburg’s seat, Kyser, a Democrat from Eau Claire, Wisconsin, predicted that it would only be a matter of time before the nation’s highest court overturns Roe v. Wade, the 1973 decision that made abortion legal in the United States. “I’m scared,” Kyser said. “It’s terrifying as a woman that anyone could have a say with what I do with my body.”

In nearby Minnesota, Rebecca Yant said she was shocked when she heard of Ginsburg’s death Friday at age 87 after complications from metastatic pancreatic cancer.

“It was like a lightning bolt,” said Yant, a Democrat who lives in Minneapolis. On Monday, Yant said she still felt devastated, and already wary about the prospect of an ugly nomination fight over Ginsburg’s replacement.

Democrats and Republicans in the Senate were quick to take sides in an emerging battle to replace Ginsburg on the high court. A Reuters/Ipsos poll taken after her death found that Americans are also divided over the issue, with 84 percent of Democrats saying the winner of the presidential election in November should pick the next Supreme Court justice, while 49 percent of Republicans agree.

In the battleground states of Minnesota and Wisconsin, Democrats said they were resigned to the likelihood that the Senate would fill Ginsburg’s seat and hand President Donald Trump a major victory on an election promise to stock the courts with conservative judges, while Republican voters eagerly awaited a new Trump appointee to the court and said it would energize their party’s base in the final moments of the general election.

McConnell has promised to hold a vote on Trump’s Supreme Court nominee. In 2016, when then-President Barack Obama tried to fill a Supreme Court vacancy created by the death of Justice Antonin Scalia, McConnell blocked the nomination, at the time saying it should wait until after the election so that voters could weigh in through their choice of president.

McConnell has argued the situation now is different from four years ago, when the Republican-controlled Senate was asked to confirm a Democratic president’s Supreme Court nominee in an election year. Now that the Senate and White House are controlled by the same party, McConnell has said he is free to fill a Supreme Court vacancy.

That argument doesn’t pass the smell test, though, said Hugh Passow, who owns an antiques store in Eau Claire, a university city in western Wisconsin that leans Democratic.

“Trump’s trying to ram through a conservative person after Republicans all said in 2016 that they’d never do anything like that. It’s total bullshit,” Passow said. He added, “Lindsey Graham is on record saying he would never go for that.” 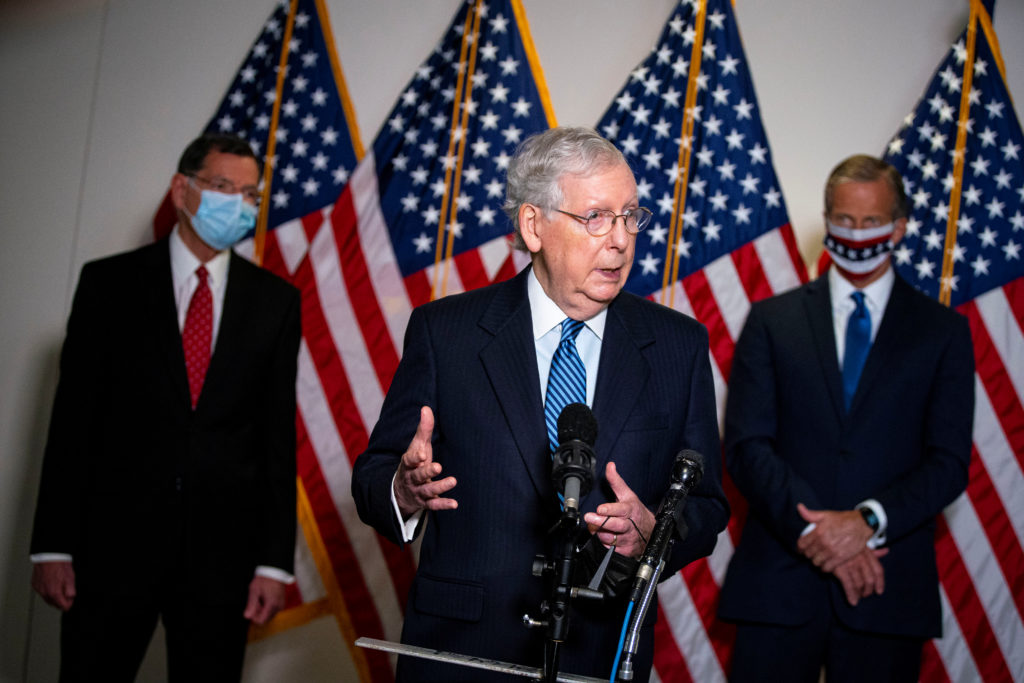 In 2018, Graham said that “if an opening comes in the last year of President Trump’s term, and the primary process has started, we’ll wait until the next election.” The day after Ginsburg died, Graham said he would support Trump’s nominee to fill her seat.

Graham isn’t alone in switching his position. Most Republicans who said in 2016 that they did not think the Senate should confirm a new Supreme Court justice during a presidential election now say they feel differently.

The change reflects the Republicans’ political fortunes in a tough election year for the party. Several incumbent Republicans are in competitive reelection battles that the party must win in order to retain control of the Senate.

The party’s fate in November is closely tied to Trump, whose national approval ratings remain below 50 percent in the midst of the coronavirus pandemic and months of protests over racial injustice. With less than six weeks left until the election, Trump is trailing former Vice President Joe Biden, the Democratic nominee, in national polls, as well as in polls in most battleground states.

To win reelection, Trump needs to hold onto some of the Midwestern states he won by narrow margins in 2016. He carried Wisconsin, which now leans in favor of Biden, by just 22,748 votes. Minnesota, a state Trump lost by just 44,593 votes, has become another critical battleground in 2020.

Both Trump and Biden visited Minnesota last Friday, underscoring the typically blue state’s new role as a key battleground for both parties. Trump happened to be speaking at a campaign rally in northern Minnesota — a rural, conservative part of the state he carried easily in 2016 — when the news of Ginsburg’s passing became public, a coincidence that added to the political drama surrounding her death.

Trump said on Saturday at another campaign rally that he would nominate a woman to fill the seat, a vow Biden also made. The president is expected to announce his nominee on Saturday, paving the way for Republicans to hold a hearing and final vote next month.

Securing another Supreme Court seat could be the last-minute victory Trump needs to push him over the top in Minnesota, said Gregg Peppin, a Minnesota-based Republican strategist. 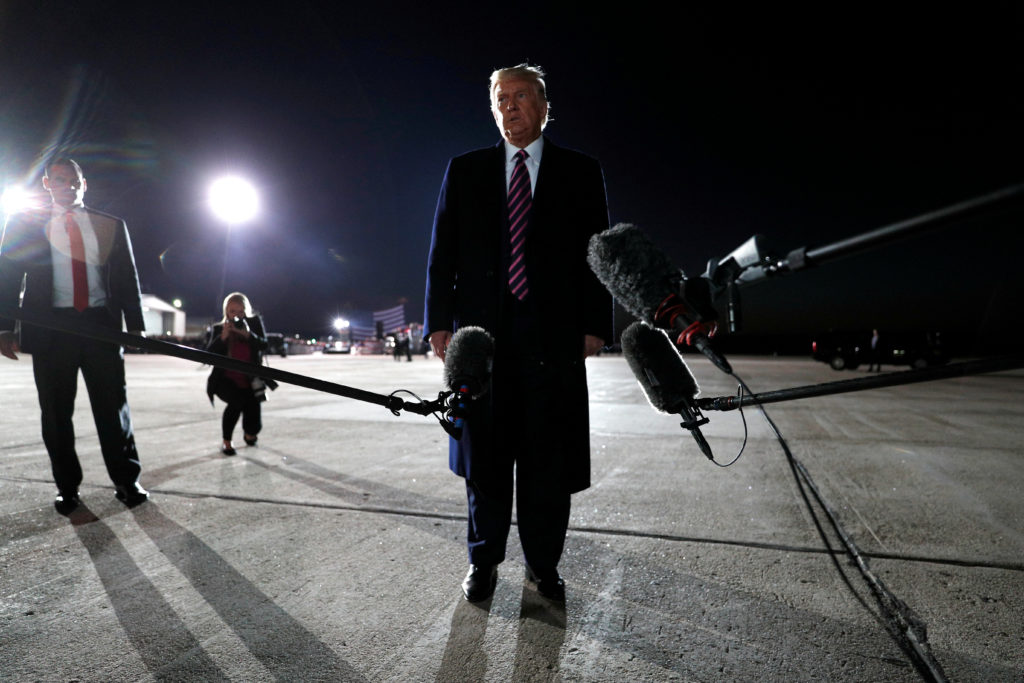 President Donald Trump speaks to the media about the death of U.S. Supreme Court Justice Ruth Bader Ginsburg as he stands on the airport tarmac at Bemidji Regional Airport after his campaign rally in Bemidji, Minnesota, on September 18, 2020. REUTERS/Tom Brenner

Before Ginsburg’s death, voters in the state were focused on the economy and the pandemic, he said. Now, “the Supreme Court could become a bigger issue,” he said.

Others argued that Americans following the Supreme Court nomination process were more likely to hold firm political views, reducing the chances that the battle would actually change the minds of many voters.

“The people who care most about the Supreme Court are those who are already pretty firmly entrenched in terms of what they think about this election,” said Mark Graul, a Republican consultant in Wisconsin.

Still, Trump supporters said they believed the prospect of adding a new conservative justice to the Supreme Court, giving the conservative bloc a commanding 6-3 majority, would drive Republicans to the polls in November.

Trump appointed Justice Neil Gorsuch to the Supreme Court in 2017, filling a yearlong vacancy left by Scalia, and secured a second seat the following year when Justice Brett Kavanaugh was confirmed after a divisive battle that centered on a woman’s claim that he sexually assaulted her when he was in high school.

“I think it’ll motivate Republican voters because this is an opportunity to cement the makeup of the Supreme Court in ways that will impact generations to come,” said Scott Dane, who lives in Gilbert, in northern Minnesota.

Dane said a strong conservative court could rule to restrict access to abortion and protect the Second Amendment right to bear arms, two key issues for many Republican voters. But Dane, who spoke at the Republican National Convention last month, said he expected the nomination process would not be pretty.

“It’s going to be as ugly and divisive as it was for Kavanaugh,” he projected.

Back in Minneapolis, Yant said she hoped the Supreme Court battle would push Democrats to become more involved in the election, because she was already seeing signs that the issue has become a rallying cry for the right.

“It’s really motivating for my Republican friends to get out and vote,” she said.