John Hinckley, who shot Reagan, to be released from mental hospital today

John Hinckley, who became a household name in 1981 when he tried to assassinate President Ronald Reagan to impress actress Jodie Foster, is set to leave his mental hospital today to live with his mother in Williamsburg, Virginia.

After 35 years under psychiatric care since Hinckley, now 61, was found not guilty by reason of insanity for shooting Reagan and three others, he was scheduled to be released from St. Elizabeths Hospital in Washington, D.C., under strict conditions. He is not allowed to travel near the current president or members of Congress, contact his victims or anyone related to them, or contact Jodie Foster, with whom he was obsessed.

Hinckley’s lawyer Barry William Levine told NPR after the initial ruling that Hinckley has been in full remission and that he poses no threat to public safety. “This case shows that people who are ravaged by disease, mental disease, can get well and become productive members of society without imposing any threat of danger,” he said.

“It could be a grave mistake to try to force fit him into that community with his 90-year-old mother,” Joe Mann, a neighbor of Hinckley’s mom, told NPR.

A lesser-known fact about Hinckley’s case is that it revolutionized how the courts in the U.S. view the insanity defense and also set a precedent for using brain scans as evidence in defense of mental incapacity.

Just two years after the producers of computed tomography X-ray, or CAT scan, won the Nobel Prize, Hinckley’s lawyer realized the technology could be useful to prove to the jury that he had a dysfunctional brain.

The court permitted the psychiatrist who diagnosed Hinckley with schizophrenia and depression to explain to the jury how the CAT scans bolstered his diagnoses.

Dr. David Bear pointed out Hinckley’s sulci – the medical term for the squiggly grooves that run along the cerebral cortex. He said that they were wider than average, connecting the trait to a scientific paper from St. Elizabeths that showed a correlation between wider sulci and schizophrenia.

The paper had found that one out of every three patients with schizophrenia had wider than average sulci, while people without the mental disorder have the same trait only two percent of the time.

“That is a high figure,” Bear said during cross-examination. “The fact that one-third had these widened sulci — whereas in normals, probably less than one out of fifty have them — that is a very powerful fact.”

It’s unclear what effect the scans had on the jury, who ultimately agreed that Hinckley was too mentally incapacitated to understand the crime he committed. Outrage over that decision sparked nationwide changes on the insanity defense. The federal government shifted the burden of proof onto the defense and made insanity harder to substantiate.

In Hinckley’s case, it was up to the prosecution to prove he was sane. Now, the defense in federal cases has to prove that the defendant is insane, “by a standard as high as beyond a reasonable doubt,” and is also limited the scope of expert testimony.

Four states have opted to get rid of the insanity defense altogether.

Now, the court routinely admits brain scans as evidence into the courtroom. They are most often seen during the mitigation phase of the death sentence, when a person has been found guilty and is hoping to convince the jury that he or she does not deserve to die. 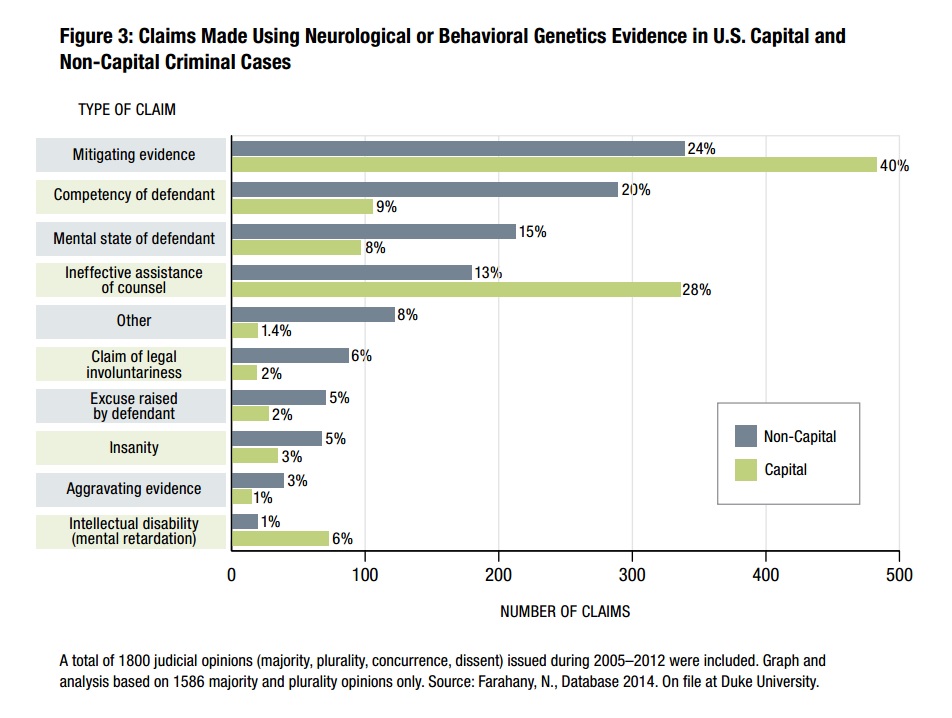 However, Hinckley’s lawyer did not present brain scans to the judge who presided over the decision to release him in July.