For a Yale Law School professor pioneering research on the #MeToo movement, a Senate Judiciary Committee hearing Thursday was not only about Christine Blasey Ford’s testimony of sexual assault; it was a public display of systems of sexism that led to this moment.

“Instead of only targeting individual people as harassers, we really have to be looking at the broader processes and dynamics that encouraged them to engage in it in the first place.” — Professor Vicki Schultz

Ford said she was “terrified” to tell the 17 men and four women that Supreme Court candidate Brett Kavanaugh assaulted her when they were teenagers — a situation Kavanaugh says he knows nothing about. As sexual assault survivors brought an outpouring of online support under the hashtag #WhyIDidntReport, an extension of #MeToo, Ford became their vessel, standing in the face of some of the country’s most powerful people, speaking her truth.

But some of those supporters also felt disappointment and silenced as the committee in a vote on Friday advanced Kavanaugh’s nomination to the Senate. #MeToo has escorted many high-profile men out of their positions since the fall of Hollywood mogul Harvey Weinstein. For them, the committee’s vote was an abrupt reminder that its momentum has limits.

With the backing of President Donald Trump and with behavior similar to Trump’s, as well as the support of the all-male GOP majority on the committee, Kavanaugh said he believes that Ford was assaulted, but that he did not assault her and it must have been someone else.

Vicki Schultz, a professor of law and social sciences at Yale Law School, was among the dozens of its faculty that sent an open letter to the committee ahead of the hearing, saying that a “partisan hearing alone cannot be the forum to determine the truth of the matter.” After the hearing, the American Bar Association and the Dean of Yale’s Law School publicly agreed.

On Friday, Sen. Jeff Flake, R-Ariz., said he supported an FBI investigation into Ford’s allegation along with Sen. Lisa Murkowski, R-AK, and Sen. Susan Collins, R-Maine, and later that day Trump instructed the FBI to investigate.

As the nation digests this unprecedented turn of events, Schultz sat down with PBS NewsHour Weekend to talk about why the “he-said, she-said” style of the hearing and other elements were indicative of much larger societal problems.

As a co-founder of United Legal Educators Against Sexual Harassment (UNLEASH) Equality, a new organization of legal scholars working toward ending sex-based harassment, who has also researched these issues for more than 20 years, Schultz explained how the committee and the #MeToo movement can benefit from broader understandings about sexist structures that can lead to assault.

What is wrong with “he-said, she-said”?

We do need to look into whether alleged sexual misconduct occurred. That’s important. But we also need to look into broader patterns of disrespect and discrimination and larger structural factors that contributed to those dynamics. “He-said, she-said” puts way too much pressure on one person—individuals who come forward— and leads to labels like “accuser.”

How does that apply to this week’s Senate Judiciary Committee hearing?

The hearing illustrated the harmful results that often occur in the context of sex segregation and lack of gender diversity. We have an all-male GOP Senate Judiciary Committee, a fact not captured visually on television in the hearings for most Americans, that doesn’t have input or pressure from female colleagues. It came up with fundamentally unfair procedures and turned the hearing into a “he-said, she-said,” or individualized situation like we talked about rather than calling for a real investigation [and a] real, fair process to include other women who had come forward as well as corroborating witnesses and evidence.

What else, from your view, deserves more context?

“Sexual harassment and assault are typically a manifestation of sexism, not sexual desire. Some men try to prove their manhood and worth at the expense of women by harassing them or otherwise putting them down.” — Professor Vicki Schultz

GOP senators deemed themselves incapable of treating Ford with respect during the questioning. They felt compelled to hire a female prosecutor to do their questioning for them. That suggests that there’s something fundamentally wrong with the system.

Another factor that I’ve written about as an important structural component to sexual harassment and sex discrimination is an unfettered discretion and absence of accountability. Power of that kind lends itself to discrimination and abuse.

Here, the GOP members had the authority to negotiate in a back room with Ford’s lawyers about what the process would be like, with unfettered power to dictate the dynamics. The basic, all-male nature and lack of gender integration, and lack of accountability and transparency produced a process that I think few legal scholars would say is fair.

So there was this biased atmosphere, which I think you get when those in control lack accountability and a female presence to introduce balance.

How did elements from the hearing relate to your work on the #MeToo movement?

I think #MeToo had some concrete results early with individuals coming forward with an invitation for folks to come forward and tell their stories on social media. That’s great.

But I think that the next steps have to involve hard theorizing and empirical investigation of the factors that lead people to harassment and discrimination. [Right now,] individual people have to be way too brave in their isolation. And Instead of only targeting individual people as harassers, we really have to be looking at the broader processes and dynamics that encouraged them to engage in it in the first place.

How would that apply to Kavanaugh’s nomination process?

There’s no way of knowing the “truth” of the matter, given the way it was set up, but there are classic indicia of problems. Sexual harassment and assault are typically a manifestation of sexism, not sexual desire. Some men try to prove their manhood and worth at the expense of women by harassing them or otherwise putting them down. So in this sense, what Ford and [other people allege] fits into a classic pattern of behavior that we observe all too often in mostly male settings. It’s not about sexual desire, it’s about showing off in front of your friends, and so the laughter Ford remembers would be telling. I’m not saying I know the truth, I’m just saying that what was alleged is a very common kind of pattern in true examples of harassment in all or almost all-male settings.

What else about Kavanaugh in this regard?

He made much of how he treats female clerks and much has been said about how he’s a mentor to women and so-forth, and that may be true. But his behavior towards Sen. Feinstein and Sen. Amy Klobuchar may also be telling. He interrupted and raised his voice at Sen. Feinstein, and he refused to [directly] answer Sen. Klobuchar’s question, in fact throwing the question back in her face.

READ NEXT: How gender and power played into the Kavanaugh testimonies

The research on sexual harassment shows that women in supervisory capacities get the highest rates of harassment of all, from men who were below them because very often men don’t like to submit to female authority.

How could what you’ve written about sex segregation apply to Kavanaugh’s nomination process?

He received his education in highly sex-segregated settings. That doesn’t damn every man who goes to an all-boys school or who is in a fraternity, but we do know that rates of sexual harassment are higher among men who are involved in all-male institutions.

If the allegations are true, for example, the fact that Georgetown Prep and the DKE fraternity were all-male settings would be no accident. Yale’s DKE chapter is notorious for sexism and sexual assault. They recently lost their lease due to complaints about misconduct. Again, that’s not to damn Judge Kavanagh just because he was a member of this fraternity. But it does provide an example of how an all-male fraternity can uphold attitudes in their members that are harmful to women or to men who are perceived as weak.

I’d want to know what the DKE fraternity was like during that time and how much he was involved. 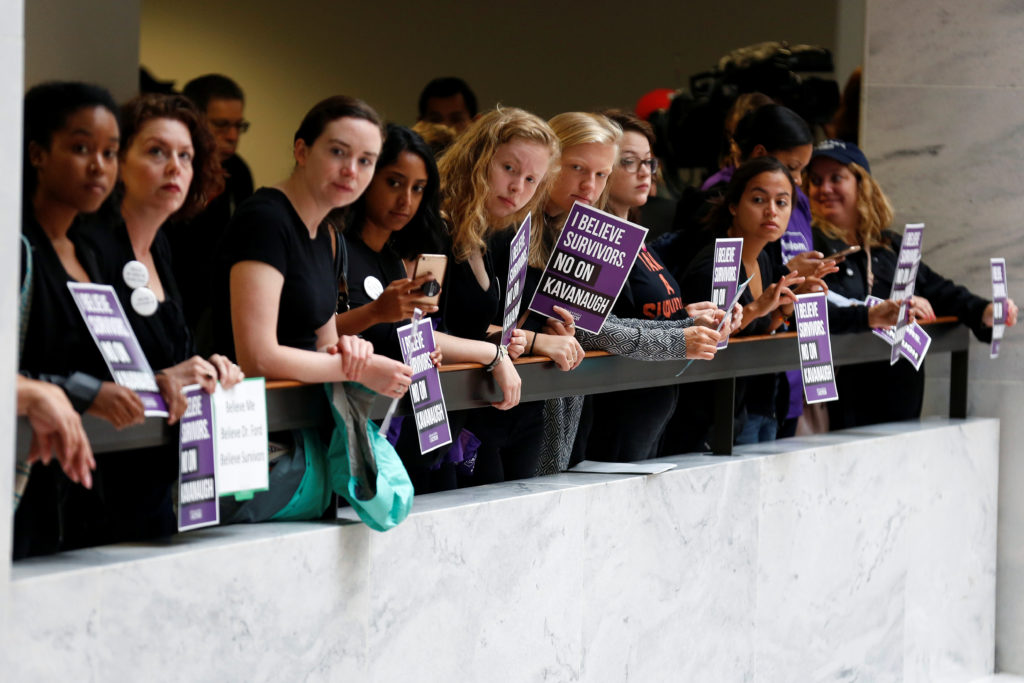 Protesters rally before a hearing where Christine Blasey Ford will testify about an accusation that U.S. Supreme Court nominee Brett Kavanaugh sexually assaulted her in 1982 on Capitol Hill in Washington, D.C., on Sept. 27, 2018. Photo by Joshua Roberts/Reuters

Why do you think that context wasn’t brought up during the hearing?

I think that most people who aren’t scholars or activists or who aren’t really informed about these matters still retain this kind of popular conception of sexual harassment and assault, which is that it’s a manifestation of sexual desire and sexual dominance and that it has very little to do with men trying to impress others and trying to be accepted within the boys club.

So if you view sexual assault as a question of a man trying to get sex from a woman as opposed to doing that as part of a way of proving his youthful manhood and making himself cool with the other guys, then you wouldn’t see the relevance of the larger context. This is why so many people have been doing research on this for so long, to try to understand these really pressing problems in our society.

“The answer is not going to lie in telling individual [people] to be better. It’s going to involve figuring out ways to address complaints fairly and to reduce the huge amount of arbitrary authority.” — Prof. Vicki Schultz

How can the #MeToo movement learn from this hearing and your research?

I’ve been concerned that some people in news and media reflexively have this narrower understanding of sexual harrassment and and view it as only conduct that is sexual in nature and is motivated by sexual desire. But research shows that most harassment of women isn’t sexual in content. And even sexualized assault and harassment typically reflect sexism and underlying attitudes of male superiority and entitlement, not just sexual desire. I think that the broader our understandings of harassment and the structural and social factors that provide breeding grounds for it, the better off we’ll be making strides toward eradicating it.

And each profession or field or workplace has its own norms. If you look at what it means to be an alpha male among firefighters, that would look very different from what it looks like to be one among senators. Some research suggests that all-female institutions breed similar kinds of pressures toward traditional femininity that are also stifling. I don’t want to pick just on men and my own research doesn’t do that. It stresses the need for people from all backgrounds to work, learn and socialize together in the same institutional settings as equals.

The answer is not going to lie in telling individual [people] to be better. It’s going to involve figuring out ways to address complaints fairly and to reduce the huge amount of arbitrary authority some people have over others.

This interview was edited for clarity and brevity.

Left: Protesters rally before a hearing where Christine Blasey Ford will testify about an accusation that U.S. Supreme Court nominee Brett Kavanaugh sexually assaulted her in 1982 on Capitol Hill in Washington, D.C., on Sept. 27, 2018. Photo by Joshua Roberts/Reuters