LOUISVILLE, Ky. — Maximum Security led the Kentucky Derby every step of the way except for the last one — into the winner’s circle.

The colt became the first winner disqualified for interference in the Derby’s 145-year history, leading to an agonizing wait and an eventual stunning reversal that made 65-1 shot Country House the winner Saturday.

Country House finished second in the slop before objections were raised, causing a 22-minute delay while three stewards repeatedly reviewed different video angles before they unanimously elevated him into the winner’s circle.

“It’s bittersweet. You always want to win with a clean trip and have everybody recognize the horse as the very good horse and great athlete that he is,” Mott said. “Due to the disqualification, I think some of that is diminished.” 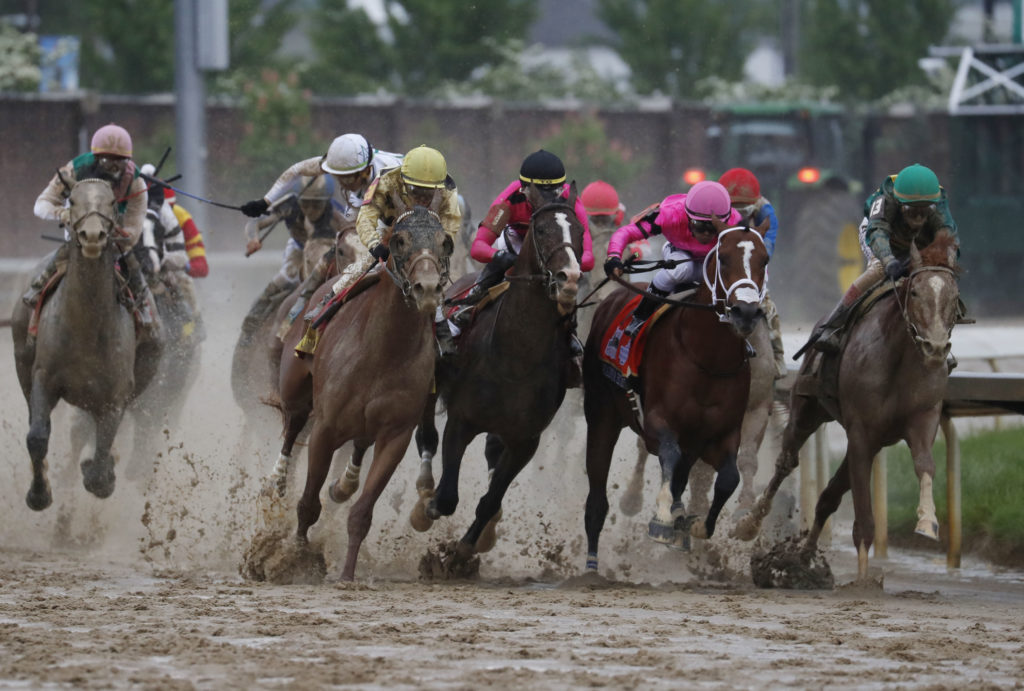 May 4, 2019; Louisville, KY, USA; Flavien Prat aboard Country House (20) , Tyler Gaffalione aboard War of Will (1) , Luis Saez aboard Maximum Security (7) and John Velazquez aboard Code of Honor (13) race during the 145th running of the Kentucky Derby at Churchill Downs. Photo By Brian Spurlock/USA Today Sports via Reuters

Jockey Flavien Prat, one of two jockeys who originated the claim of foul, also won his first Derby.

Country House paid $132.40 to win — the second-highest payout in Derby history. He was the least affected horse in the chain of events on the rain-soaked track, but the biggest beneficiary.

“Looking at the tote board there’s probably a lot of people that didn’t think we could win,” Mott said, “but that’s horse racing.”

Gary West, who owns Maximum Security with his wife, Mary, indicated they may pursue an appeal.

“I think this is the most egregious disqualification in the history of horse racing,” he told The Associated Press by phone, “and not just because it’s our horse.”

The victory was worth $1.8 million; Maximum Security earned nothing since only the top five finishers are paid. 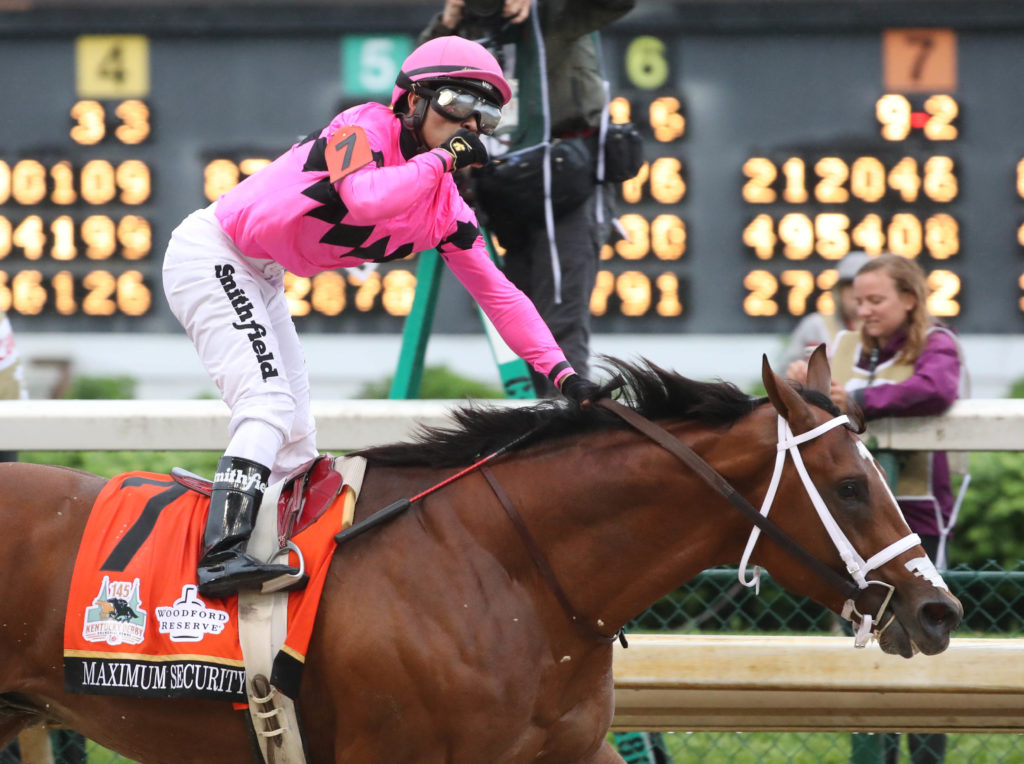 May 4, 2019; Louisville, KY, USA; Luis Saez aboard Mximum Security (7) reacts after crossing the finish line during the 145th running of the Kentucky Derby at Churchill Downs. Photo By Mark Zerof/USA Today Sports/Reuters

Country House was dismissed as a long shot with a bad post on the far outside. It was only the chestnut colt’s second win in seven career starts and his first stakes victory.

Maybe this was one for his father: Lookin At Lucky got saddled with the dreaded No. 1 post in the 2010 Derby, where he got pinned to the rail and wound up sixth. He rebounded to win the Preakness two weeks later.

The disqualification was a crushing turn of events for Maximum Security trainer Jason Servis and jockey Luis Saez, who already had begun celebrating what they thought were their first Derby victories.

Instead, previously undefeated Maximum Security was dropped to 17th of 19 horses for veering out turning for home and stacking up War of Will, Long Range Toddy and Bodexpress (also owned by the Wests), according to Barbara Borden, chief steward of the Kentucky Horse Racing Commission. Country House, in turn, was brushed by Long Range Toddy.

Sent off as the 9-2 second choice, Maximum Security was placed behind all the horses that he bothered.

“I never put anybody in danger,” Saez said. “My horse shied away from the noise of the crowd and may have ducked out a little.”

Servis backed up his jockey, saying: “He’s right. He straightened him up right away and I didn’t think it affects the outcome of the race.”

Prat claimed that Maximum Security ducked out in the final turn and forced several horses to steady, including Long Range Toddy, whose jockey, Jon Court, also lodged an objection.

“I had to stop very abruptly,” Court said.

War of Will came perilously close to clipping heels with Maximum Security, which could have caused a chain-reaction accident.

“I checked pretty hard when the seven (Maximum Security) came out as far as he did,” said Tyler Gaffalione, aboard War of Will.

Mott said War of Will and Long Range Toddy “lost all chance” to win.

“They were in position at the time to hit the board,” the trainer said. “If what happened to us was the only thing they were looking at I don’t think you would have seen a disqualification.”

Mott said the incident was caused by Maximum Security’s action and not Saez’s riding tactics.

“I don’t think Luis Saez did anything intentionally,” he said. “My heart actually aches for them a little bit. That’s the way it is. I’ve been on the other end of it, just not in the Kentucky Derby.”

The stewards reviewed race footage and interviewed the affected jockeys while keeping the crowd of 150,729 and millions more watching on television and online in suspense, clutching their betting tickets. Trainers and jockeys involved stared at the closest video screen waiting for a result.

“I know the stewards had a very, very difficult decision,” Mott said. “I’m damn glad they put our number up.”

Code of Honor was moved up to second and Tacitus — also trained by Mott — was third.

Improbable was fourth and Game Winner fifth, two of trainer Bob Baffert’s trio of entries. His other horse, Roadster, was 15th. 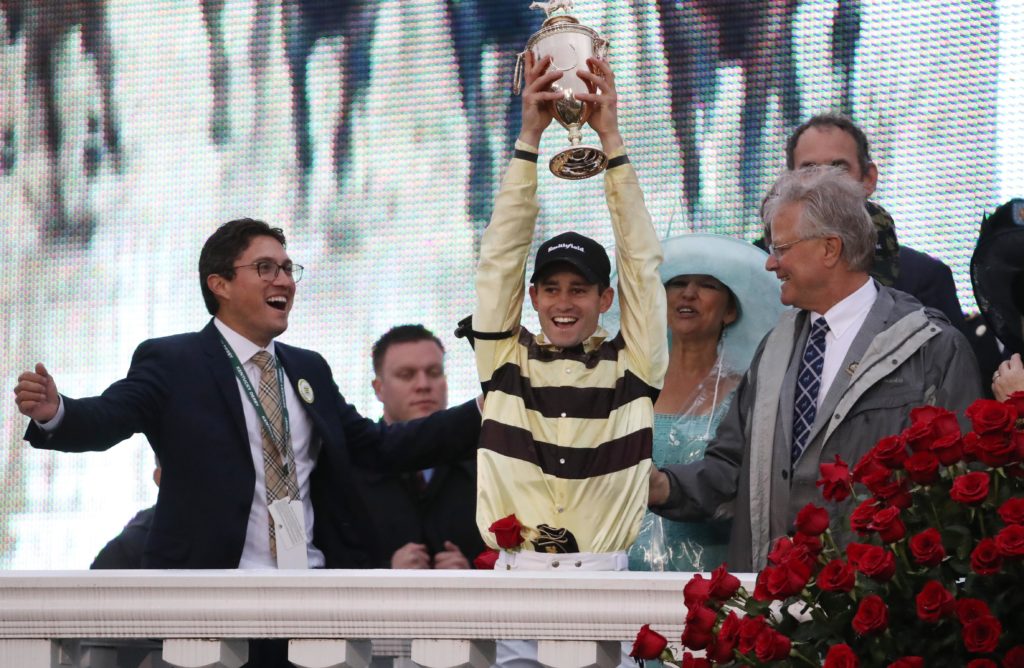 May 4, 2019; Louisville, KY, USA; Horse jockey Flavien Prat celebrates with the trophy in the winner’s circle after the 145th running of the Kentucky Derby at Churchill Downs. Photo By Mark Zerof.USA Today Sports via Reuters

The last claim of foul by a jockey in the Derby was unsuccessful. John Velazquez, aboard runner-up Invisible Ink in 2001, alleged interference at the quarter pole against Monarchos and Jorge Chavez, who crossed the finish line 4¾ lengths in front. The stewards didn’t change the result.

The only other disqualification in the Derby occurred long after the race in 1968. Dancer’s Image, the first-place finisher, tested positive for a prohibited medication, and Kentucky state racing officials ordered the purse money to be redistributed. Forward Pass got the winner’s share. A subsequent court challenge upheld the stewards’ decision.

Country House wore the garland of red roses, but it’s possible the situation doesn’t end here. There could be appeals to the Kentucky Horse Racing Commission or the courts.

“We are exploring our options to appeal,” West told the AP. “If we can’t appeal to the stewards, our other options are the state racing commission. If those don’t work, we might go to legal options.”

Mott hopes it doesn’t come to that.

“That’s a nightmare. It’s a no-win situation for anybody involved,” said Mott, who spoke with Servis after the reversal. “I didn’t get a hint of that from him. He’s been around long enough, and I’m sure he watched the films well enough. He knows what happened.”

The surprising flip threw a few bettors into a frenzy, too. Some who had wagered on Country House to win immediately tossed away their tickets at the finish, only to then scramble to the ground at Churchill Downs, frantically searching for their betting slips.

Master Fencer, the first Japan-bred to run in the Derby, was sixth. War of Will was seventh, followed by Plus Que Parfait, Win Win Win, Cutting Humor, By My Standards and Vekoma.

AP Sports Writer Gary B. Graves contributed to this report.

Left: May 4, 2019; Louisville, KY, USA; Flavien Prat aboard Country House (20) is led to the winner's circle after the 145th running of the Kentucky Derby at Churchill Downs. Photo By Mark Zerof/USA Today Sports via Reuters