PAHOA, Hawaii — The Hawaiian volcano destroyed 26 homes and spewed lava hundreds of feet into the air, leaving evacuated residents unsure how long they might be displaced.

Hawaii officials said the decimated homes were in the Leilani Estates subdivision, where molten rock, toxic gas and steam have been bursting through openings in the ground created by the volcano.

Some of the more than 1,700 residents who have been evacuated were allowed to briefly return to gather medicine, pets, and other necessities.

Officials say residents would be able to do so each day until further notice as authorities monitor which areas are safe. 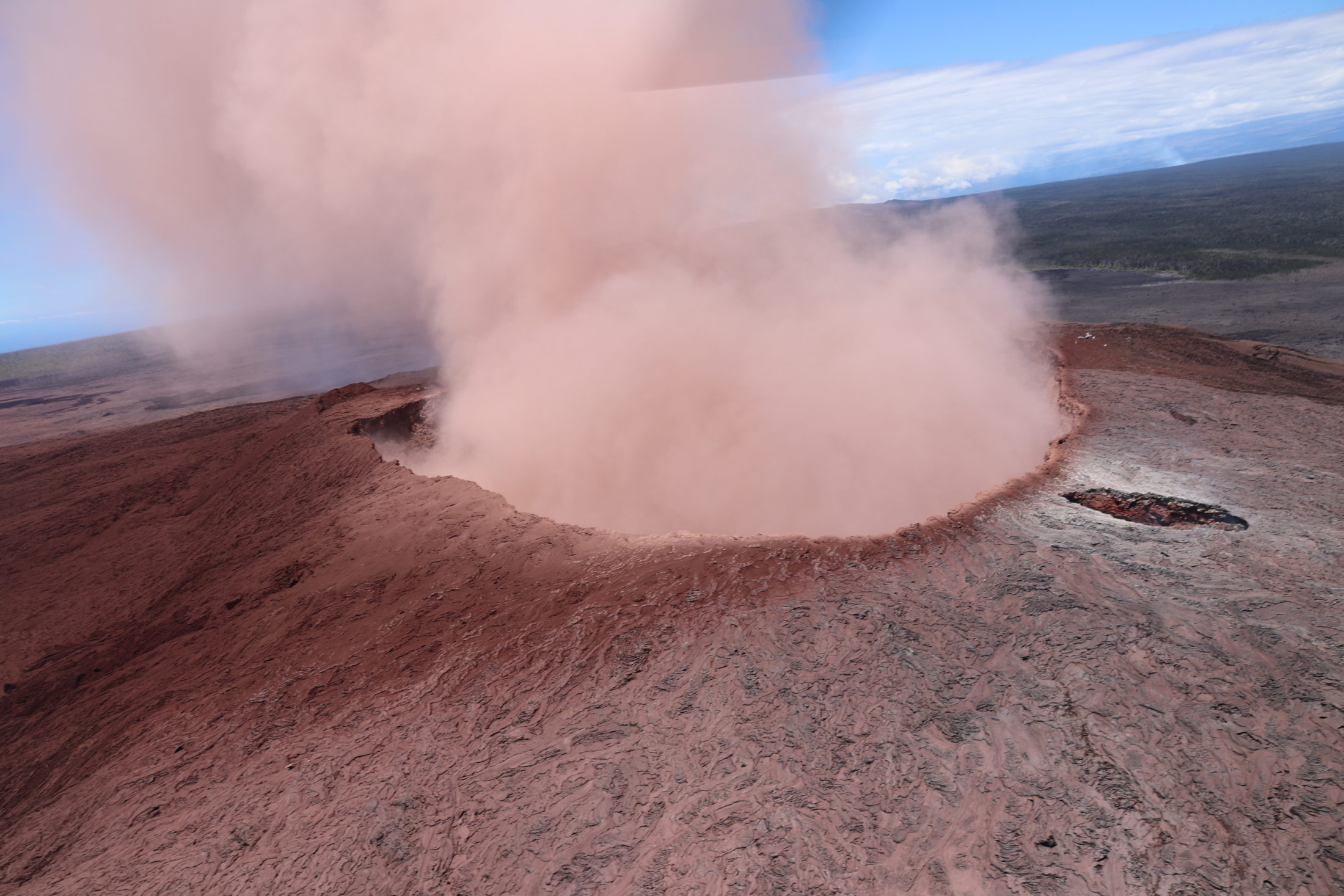 A view of Pu’u ‘O’o cone from the east, shortly after a small collapse. The coating of red ash on the south side of the cone is evident. Photo and caption by USGS 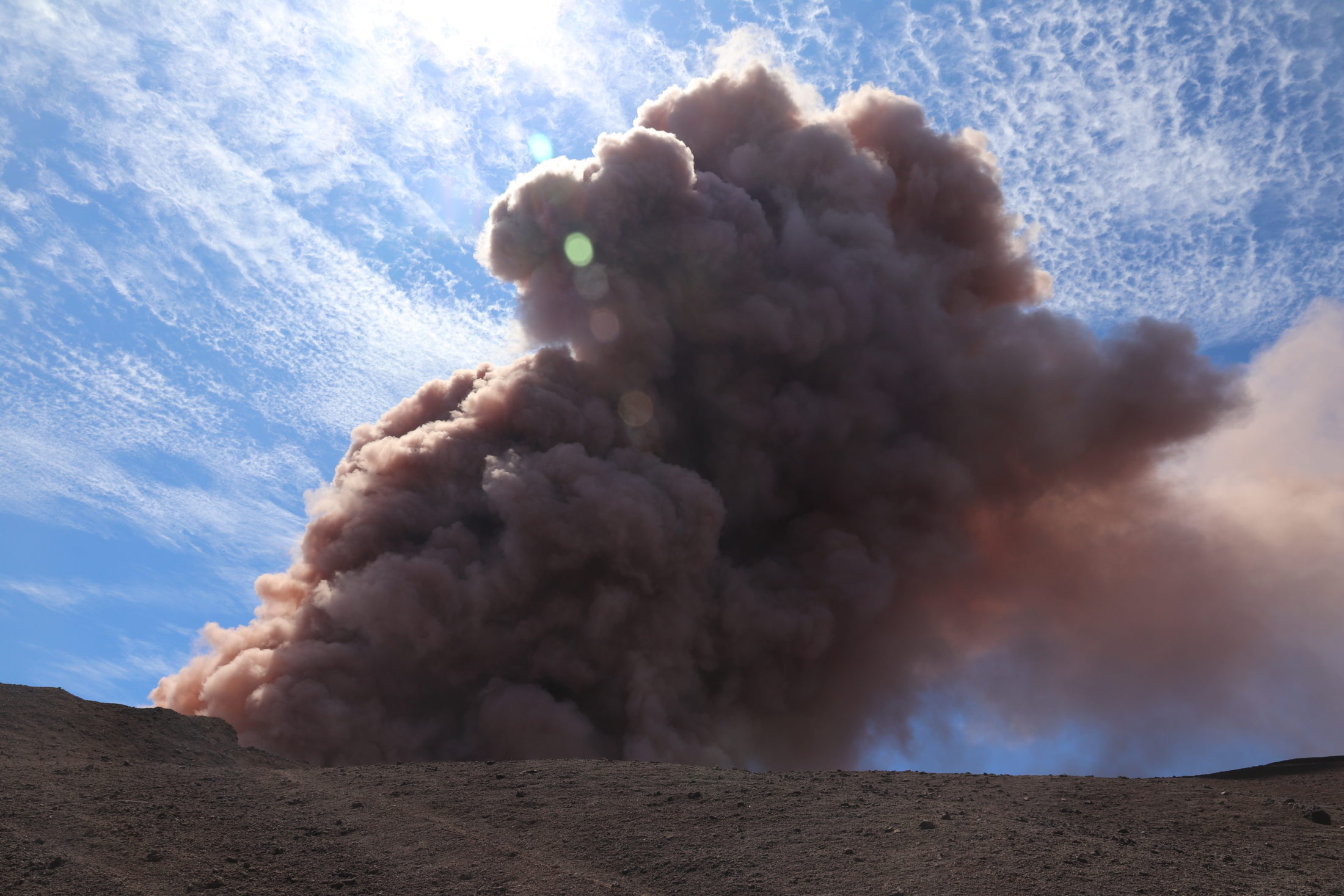 Moments after an earthquake, a collapse occurred in the crater of Pu’u ‘O’o, creating a robust, reddish-brown ash plume. Photo and caption by USGS

Amber Makuakane Kane, 37, a teacher and single mother of two, said her three-bedroom house in Leilani Estates was destroyed by lava.

The dwelling was across from a fissure that opened Friday, when “there was some steam rising from all parts of the yard, but everything looked fine,” Makuakane said.

On Saturday, she received alerts from her security system that motion sensors throughout the house had been triggered. She later confirmed that lava had covered her property.

Makuakane grew up in the area and lived in her house for nine years. Her parents also live in Leilani Estates.

“The volcano and the lava — it’s always been a part of my life,” she said. “It’s devastating … but I’ve come to terms with it.”

Lava has spread around 387,500 square feet (36,000 square meters) surrounding the most active fissure, though the rate of movement is slow. There was no indication when the lave might stop or how far it might spread.

“There’s more magma in the system to be erupted. As long as that supply is there, the eruption will continue,” U.S. Geological Survey volcanologist Wendy Stovall said.

Cherie McArthur wondered what would become of her macadamia nut farm in Lanipuna Gardens, another evacuated neighborhood near Leilani Estates. One of the year’s first harvests had been planned for this weekend.

“If we lose our farm, we don’t know where we’re going to go. You lose your income and you lose your home at the same time,” said McArthur, who’s had the farm for about 20 years. “All you can do is pray and hope and try to get all the information you can.”

The number of lava-venting fissures in the neighborhood grew overnight from eight to as many as 10, Stovall said, though some have quieted at various points. Regardless, USGS scientists expect fissures to keep spewing.

The lava could eventually be channeled to one powerful vent while others go dormant, as has happened in some previous Hawaii eruptions, Stovall said.

Kilauea, one of the world’s most active volcanoes, has been erupting continuously since 1983.

The USGS’s Hawaiian Volcano Observatory issued a notice in mid-April that there were signs of pressure building in underground magma, and a new vent could form on the cone or along what’s known as the East Rift Zone. Leilani Estates sits along the zone.

The crater floor began to collapse Monday, triggering earthquakes and pushing lava into new underground chambers that carried it toward Leilani Estates and nearby communities. A magnitude-6.9 earthquake — Hawaii’s largest in more than 40 years — hit the area Friday.

It set Michael McGuire’s car rocking in his driveway, knocking things off his shelves and shattering glass in his cabinets near Leilani Estates.

He hoped to check on his home Sunday but realized it was too soon to be sure when, or if, it would be safe from the moving lava.

“I’m somewhat fatalistic: if it happens, it happens,” he said. “And I’m enjoying life here, so you know, you put up with a lot of things here. This is one of them.”

Noah and Laura Dawn own a retreat center about 3 miles downhill from the most active vents They were clearing out items Sunday and relocating up the coast indefinitely.

“We’re just removing all things of value to us and precious things because I have the feeling it could get real – real, real fast,” Noah Dawn said.

Photos: Why did the Kilauea volcano make a pink plume?

Left: Lava advances along a street near a fissure in Leilani Estates, on Kilauea volcano's lower East Rift Zone, Hawaii on May 5. Photo by U.S. Geological Survey/Handout via Reuters

Kilauea has been erupting since 1983 — can scientists predict when it will stop?