ATLANTA — There was an abundance of evidence when officers arrived at the scene on a February afternoon in coastal Georgia: A man, apparently unarmed, lying on the street, soaked in blood. The suspected shooter, a shotgun, eyewitnesses. And video of the incident.

But no arrests were made in the death of 25-year-old Ahmaud Arbery for more than two months, not until after video of the shooting in Brunswick surfaced and stoked a national uproar over race relations.

Local prosecutors are now under investigation for their handling of the case. And a newly appointed investigative agency and prosecutor must untangle the criminal investigation, build a case and make up for lost time. 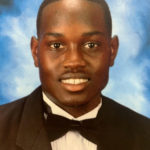 Ahmaud Arbery, who was shot and killed in Brunswick, Georgia, U.S. on February 23, 2020, is seen in an undated photo provided by Marcus Arbery. Courtesy of Marcus Arbery/Handout via Reuters.

Among the questions: Did shooting suspect Travis McMichael and his father, Gregory, both white, get special treatment because the elder McMichael had been a longtime investigator at the Brunswick Circuit District Attorney’s office? Did investigators treat the shooting as a potential murder, or as a justifiable homicide? And might the outcome have been different if Arbery weren’t black?

The 911 operator sounded confused by the caller’s description of a purported crime: A man was in a house under construction.

“You said someone’s breaking into it right now?”

“No, it’s all open. It’s under construction,” the caller says, “And he’s running right now. There he goes right now.”

The dispatcher says she’ll send police, but “I just need to know what he was doing wrong.”

A second call comes in six minutes later: “I’m out here in Satilla Shores. There’s a black male running down the street.”

The operator is trying to get more details when a man yells, “Stop. … Damnit. Stop.” Then, after a pause, “Travis!”

According to the police report, Gregory McMichael said he saw a person he suspected of burglary “hauling ass” down the street. He ran inside his house, calling for his son Travis. The two grabbed their guns, hopped into a pickup truck and chased him.

Gregory McMichael told police they wanted to talk to Arbery and tried to corner him, but he began to “violently attack” Travis McMichael, the report says. The two fought over the shotgun, and Arbery was shot. The McMichaels claimed self-defense.

The father and son were questioned, and police called the district attorney’s office, where Gregory McMichael had worked for more than two decades, for legal advice. They were released.

Meanwhile, Arbery’s mother got a call from an investigator.

She repeated that story to her family.

Law enforcement in Brunswick has a checkered history, and over the past decade police have faced numerous lawsuits and increasing scrutiny.

In 2010, two officers fired eight bullets into an unarmed woman’s car after a chase, killing her. An investigation found neither of the officers checked on her condition afterward — instead their in-car cameras caught them comparing their shooting skills.

One of those officers later killed his estranged wife and her friend before dying in a standoff with police. 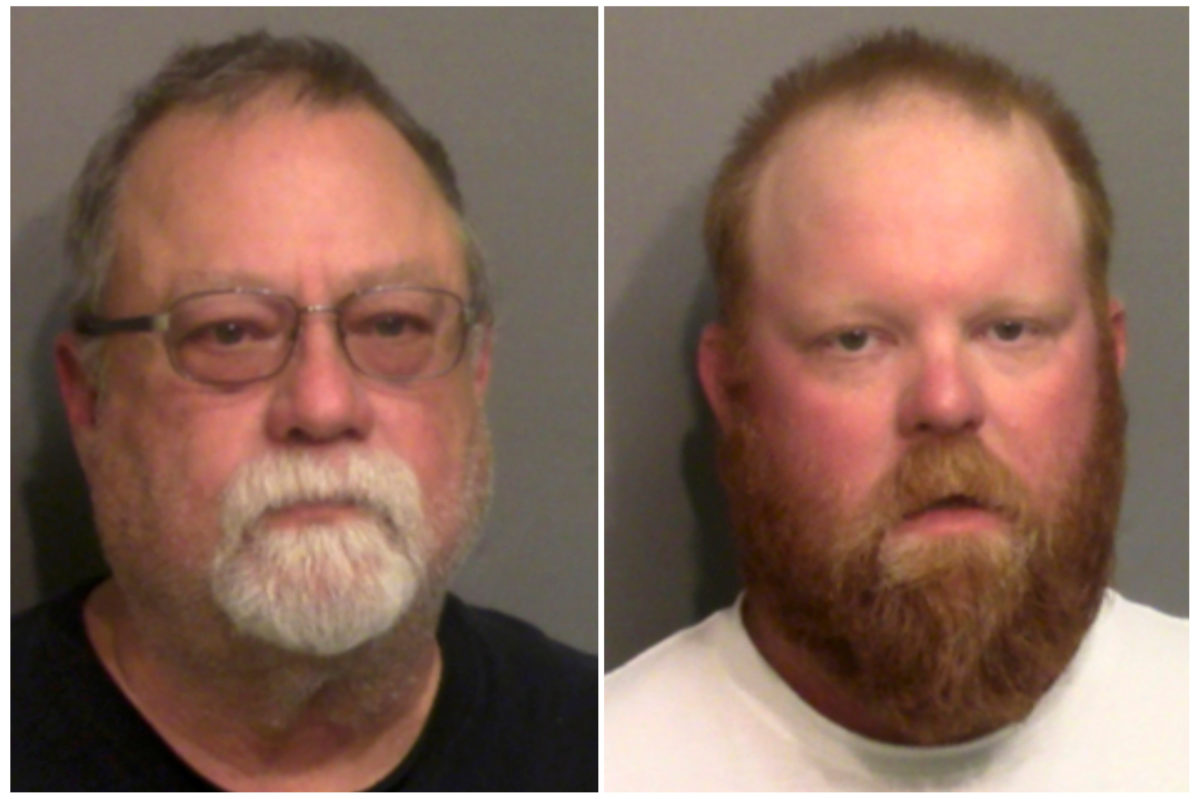 Former police officer Gregory McMichael, 64, and his son Travis McMichael pose for a booking photo they were arrested by the Georgia Bureau of Investigation and charged with murder in the shooting death of unarmed black man Ahmaud Arbery, in Brunswick, Georgia, U.S. in a combination of photographs taken May 7, 2020. Glynn County Sheriffs Office/Handout via Reuters.

Just days after Arbery’s killing, Glynn County Police Chief John Powell and three former high-ranking officers were indicted in what investigators described as a cover-up of an officer’s sexual relationship with an informant.

A November 2019 memo from the county manager described how Powell had “inherited a culture of cronyism, outdated policies, lack of appropriate training, and loss of State certification.”

The memo also described how supervisors had failed to document or investigate misconduct allegations and detailed a “culture of cover-ups, failure to supervise, abuse of power, and lack of accountability within the Glynn County Police Department” before Powell arrived.

Now, the version of Arbery’s death told to Cooper-Jones is under dispute, and authorities are again under scrutiny.

Officers in a small town calling the DA for guidance in a fatal shooting case is not unusual and would normally be uncontroversial. But there’s disagreement over what happened next.

Peter Murphy, an elected commissioner in Glynn County, alleged that officers were hesitant to arrest the McMichaels after the DA’s office told them it wasn’t necessary.

“I’m just wondering, what other investigation occurred over the next two months really?” Murphy said.

The district attorney’s office has called that a “malicious lie” and says it was police who raised the justified shooting angle.

Police say they were told the day of the shooting that more follow-up was needed but the McMichaels weren’t flight risks and could go home. A second prosecutor was brought in after the first recused herself because Gregory McMichael had worked for her, and he quickly decided no charges were necessary. He was eventually removed over his own conflict of interest — his son works at the Brunswick Circuit.

J. Tom Morgan, a former metro Atlanta district attorney who is now a criminal defense lawyer, said it would be a “big misstep” for the DA to advise against arrests if officers decided there was probable cause that a crime had occurred.

“I can’t imagine saying ‘stand down’ if I’m not there personally to talk to people,” Morgan said. “If police believe they have probable cause, I’m not going to second-guess them from my back porch.”

In any homicide, it’s important to interview witnesses immediately while the facts are still fresh in their minds and before they’ve had a chance to coordinate stories. If that was delayed because officers were told not to make arrests, it could be problematic, he said.

Bowling Green State University criminologist Philip Stinson said there is also a tendency to treat a crime scene differently if a current or former law enforcement officer is involved, as was the case with Gregory McMichael.

It could make it harder for prosecutors to bring a successful murder case, and easier for defense lawyers to argue that the crime scene is tainted by potential prosecutor misconduct that’s under investigation by Georgia authorities.

It looks like investigators started with an assumption it was a justified shooting, Stinson said.

“Because of that — because of all of the assumptions that are made, all of the steps in the investigation that are not taken — they made the job much more difficult for the AG’s office,” he said.

The case seemed to have stalled until May 5, when a video was posted to the website of a local radio station.

The shaky footage, taken by a man listed in the police report as a witness, shows Arbery, dressed in shorts and a white top, running from the McMichaels. The driver’s side door is open. Travis McMichael and Arbery appear to struggle over the gun. Gregory McMichael hops from the back of the truck. Arbery is shot and falls to the ground.

It doesn’t show Arbery with a firearm, nor have police said they recovered one.

The footage seemed to refute Gregory McMichael’s version and prompted widespread outrage and calls for justice. The case drew national attention, including from Jay-Z and President Donald Trump, who said he was “disturbed.”

The Georgia Bureau of Investigation took over the case. Investigators canvassed the neighborhood, talking to some people who had previously been interviewed and others who hadn’t.

They arrested both McMichaels on charges of aggravated assault and murder May 7, less than 48 hours later.

GBI director Vic Reynolds said there was clear probable cause and that local authorities had done “a good investigation, a thorough investigation.”

A third prosecutor who had the case when the video surfaced was removed after the attorney general said it had grown in “size and scope,” and a fourth prosecutor from a bigger district has now been appointed. Cobb County District Attorney Joyette M. Holmes, one of seven black district attorneys in Georgia, is overseeing the prosecution at the direction of the state attorney general.

The first DA, Jackie Johnson, has defended her office’s involvement. So has the second DA.

“I’m confident an investigation is going to show my office did what it was supposed to and there was no wrongdoing on our part,” Johnson told the AP this week.

Asked if anyone in her office told police not to arrest the McMichaels or suggested the shooting may have been justified, Johnson said, “Absolutely not.”

More video has emerged of a man inside a home under construction — the home the where the 911 caller reported seeing someone shortly before Arbery was shot. But the owner’s lawyer has told AP and others the house was wide open, and nothing was ever taken.

The McMichaels remain in jail and their attorneys caution against a rush to judgment.

For now the case is stalled once again, with courts largely closed due to the coronavirus pandemic and no way to call a grand jury until mid-June at the earliest.

Left: Supporters of the Georgia NAACP (National Association for the Advancement of Colored People) wearing protective masks protest after the death in February of Ahmaud Arbery, an unarmed young black man shot after being chased by a white former law enforcement officer and his son, at the Glynn County Courthouse in Brunswick, Georgia, U.S., May 8, 2020. Photo by Dustin Chambers/Reuters.