Lawyer of officer who killed Castile ‘not concerned’ about criminal charges

The lawyer representing the St. Anthony police officer who shot and killed a black motorist in Minnesota on July 6 said Saturday that the officer was not reacting to race, but “the actions of the driver.”

Police Officer Jeronimo Yanez shot Philando Castile, 32, in the driver’s seat of a car on Wednesday night in the Falcon Heights neighborhood, just outside the state capitol. Castile died at the hospital.

The Minnesota State Bureau of Criminal Apprehension is investigating — the standard when an officer is involved in a shooting.

Thomas Kelly, who represents Yanez through the police union, told the NewsHour in a phone interview that such investigations can take as long as 18 months, but said “I’m not concerned about criminal proceedings here and I don’t think he is either.” 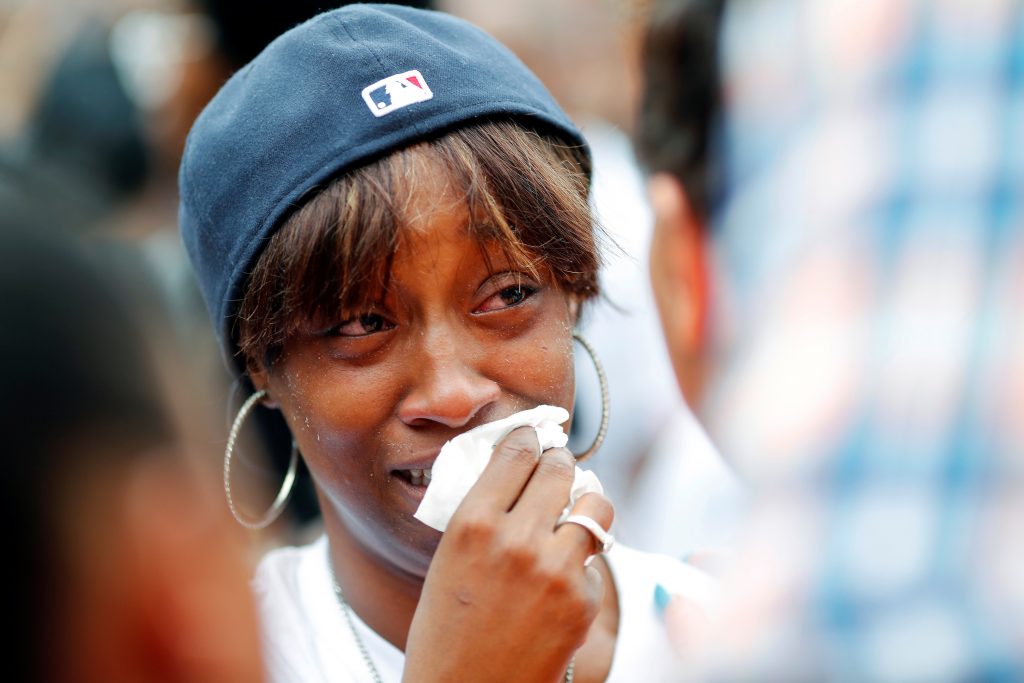 Diamond Reynolds, girlfriend of Philando Castile, cries during a protest in St. Paul, Minnesota on July 7, 2016. Photo by Adam Bettcher/Reuters

Much of what the public knows about the shooting came from Castile’s girlfriend, who live streamed the immediate aftermath on Facebook.

Diamond Reynolds, while in the passenger seat with her young daughter in the backseat, said in the video that Castile, “let the officer know that he had a firearm and he was reaching for his wallet and the officer just shot him in his arm.”

In the emotional video, Castile is bloodied, moaning and struggling to stay alive while Reynolds says, “stay with me.”

The next morning, Minnesota Governor Mark Dayton said he was “deeply, deeply offended” by Castile’s death, adding that race played a role in the incident – a public address that was little consolation for the rattled community.

“You see a gentleman who has his seatbelt on and his significant other and a baby in the car, those are tell-tale signs that this is not a problematic situation,” he told the NewsHour. “There was an unwarranted fear of him because if you talk to everyone who knows and worked with him, there’s clearly nothing fearful about him.”

But Kelly disputed both Reynolds’ account and the mayor’s assessment that race played a role in the shooting.

“I can tell you that the driver disregarded the clear commands of Officer Yanez,” Kelly said.

Kelly said Yanez was “reacting to the actions of the driver of the vehicle and included in those actions were the presence and production of a weapon.” While saying he could not provide more detail, he said “I can tell you that race had nothing to do with the shooting.”

Reynolds had said on Facebook that the officer had pulled them over because of a busted tail light, but Kelly said there that was not the only reason.

“There was more than just the equipment violation,” he said, while declining to elaborate.

Reynolds’ lawyer said they were never under the impression they were being pulled over for anything other than a broken tail light. In an unconfirmed audio tape circulating online, which is believed to be of Yanez heard on the scanner before the shooting took place, a voice says the duo fit the description of robbery suspects.

“Diamond’s videotape description of what happened that day never describes any such suggestion that they were pulled over for that,” Rogers said.

He also said a recent report that revealed Castile had been stopped 52 times for mostly minor traffic offenses in recent years is an indicator that Castile has been “obsessively harassed” by law enforcement.

Castile’s case occurred soon after another black man was shot and killed by a police officer in Baton Rouge, Louisiana. Then on Thursday night, a sniper attack at a protest on the shootings killed five police officers in Dallas.

For a third time in as many days President Barack Obama spoke about persisting racial tension on Saturday — but rejected the idea that this week’s violence implied a return to the country’s dark past.

“Americans of all races and all backgrounds are rightly outraged by the inexcusable attacks on police, whether it’s in Dallas or anyplace else,” Obama said. “This has been a tough week.”

Left: A man kneels at a make-shift memorial at the site of the police shooting of Philando Castile in Falcon Heights, Minnesota, July 7, 2016. Photo by Eric Miller/Reuters