Thousands of people around the country participated in a national Equality March for Unity and Pride on Sunday, with a central march in Washington, D.C.

The march aimed to bring together and affirm members of LGBTQ communities and their allies to highlight discrimination and call for expanding LGBTQ rights, according to march co-chairs.

David Bruinooge, who is based in Brooklyn, New York, proposed the march on Facebook in January, according to the Washington Blade. He wrote on the event’s Facebook page that he drew inspiration from the worldwide Women’s March in January and hoped to create a similar event for the LGBTQ community.

The march’s platform highlights a number of causes, including disability rights, preventing violence against LGBTQ people, and support for LGBTQ immigrants. 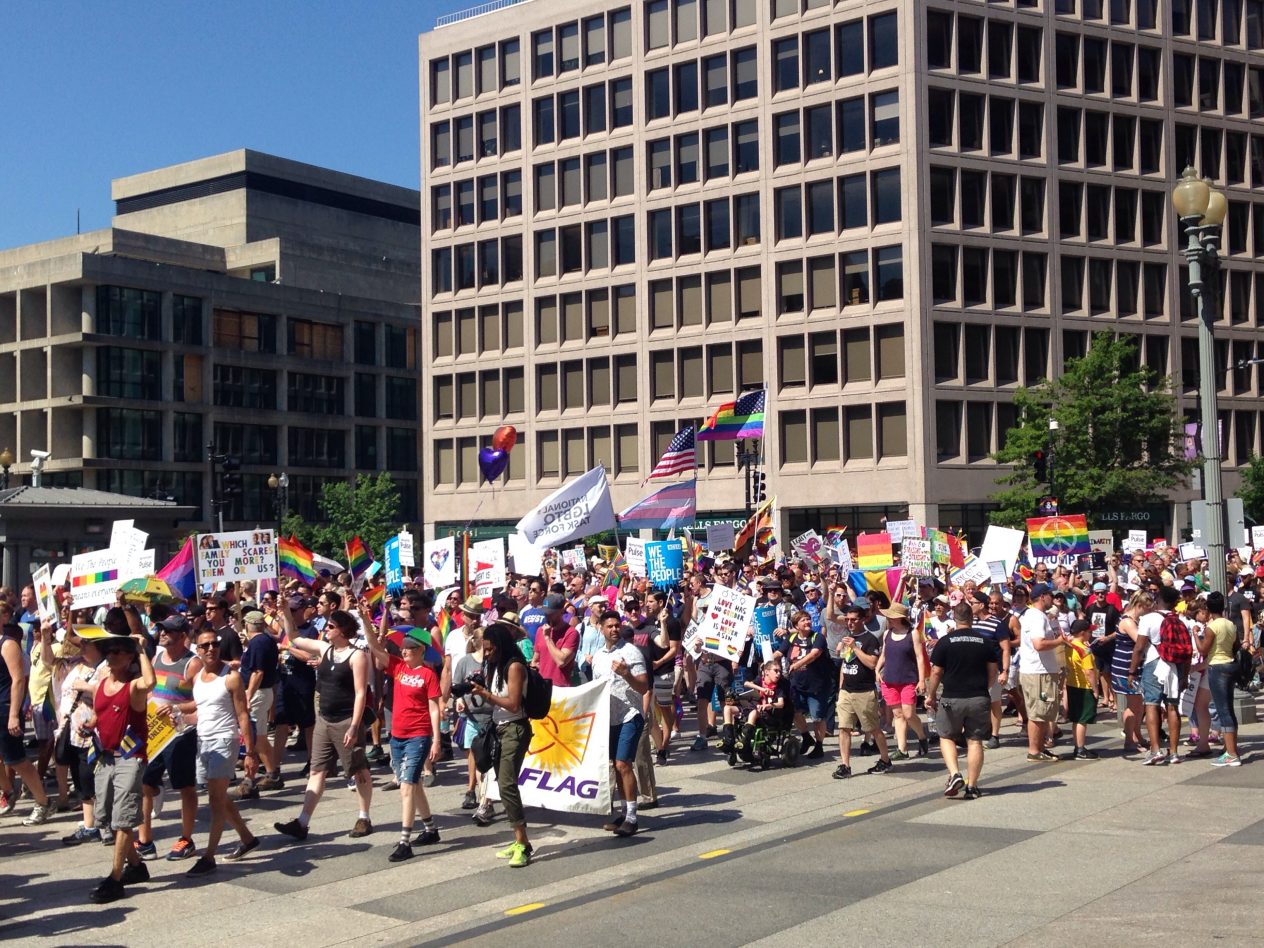 The march began by Washington, D.C.’s Farragut Square and culminated on the National Mall. It followed a series of celebratory events hosted by Capital Pride Alliance in Washington, D.C., from Thursday to Sunday, including a pride march on Saturday.

Activists from the collective No Justice, No Pride disrupted Capital Pride’s Saturday pride parade, protesting the organization’s support from corporations and banks as well as the police presence at the march. Protesters also opposed what they said was Capital Pride’s exclusion of people of color and transgender individuals.

On Sunday, thousands of people from across the country filled the streets with signs, flags and chants. Some participants said they marched to celebrate friends and family, while others wanted to demonstrate resistance to President Donald Trump’s administration.

In February, the Trump administration repealed guidelines from former President Barack Obama’s administration that had directed schools to allow students to use the bathroom that corresponds to their gender identity. Vice President Mike Pence has voiced support for conversion therapy to change people’s gender identity or sexual orientation, a practice the American Psychiatric Association has said harms LGBTQ people, and said marriage should be restricted to heterosexual couples.

“I’m here because it’s a matter of celebrating and supporting LGBTQIA identity. It’s not about politics or policy or a difference in political opinion. It’s about an administration denying our identity. We will resist completely,” Timothy Kaine of Ohio told the PBS NewsHour.

The march occurs the day before the one-year anniversary of a nightclub shooting in Orlando, Florida, that killed 49 people, making it the deadliest mass shooting in U.S. history. The massacre occurred on a Latin-themed night at the gay nightclub Pulse.

Randy Christensen, 48, said he marched in honor of the victims of the Pulse shooting. “We came up with 32 people coming from West Palm Beach, Florida, to support the LGBTQ community and remember Pulse. It really affected us, knowing that can happen in our state,” Christensen said.

Rosie Silvers, 16, said the march was important for “the people who can’t vote to still feel like we can do something.”

March officials and partner organizations told the NewsHour Weekend the march is meant to emphasize the importance of diversity, unity between different communities and recognizing people who are marginalized within the LGBTQ community.

Catalina Velasquez, president and founder of consulting firm Consult Catalina and a co-chair of the march, called the event “an urgent call to action.”

She said that it was important to see people often marginalized within the LGBTQ community, such as immigrants, people of color, and transgender people, working as leaders of the march, and hopes it will help to change transgender and queer narratives “from victimhood to personhood and from surviving to thriving.”

The transgender community is “not the last letter in a growing acronym, we are multiple communities that are oftentimes mystified, demonized, and it’s coming at a high cost,” she said.

The march’s platform points include a call to prevent discrimination against transgender and gender nonconforming people.

Raffi Freedman-Gurspan, director of external relations at the National Center for Transgender Equality, a partner of the march, said she was “pleased to see is that this march is focusing on marginalization, calling out appropriately that for far too long, many voices in [the] broad LGBTQ community have been kept out of discussions that impact their lives.”

Daniel Pino, communications strategist at NMAC, an organization that advocates for people of color with HIV and is partnering with the march, said, “We are ensuring the HIV movement is represented within this moment.”

See more photos of the march in Washington, D.C., below. 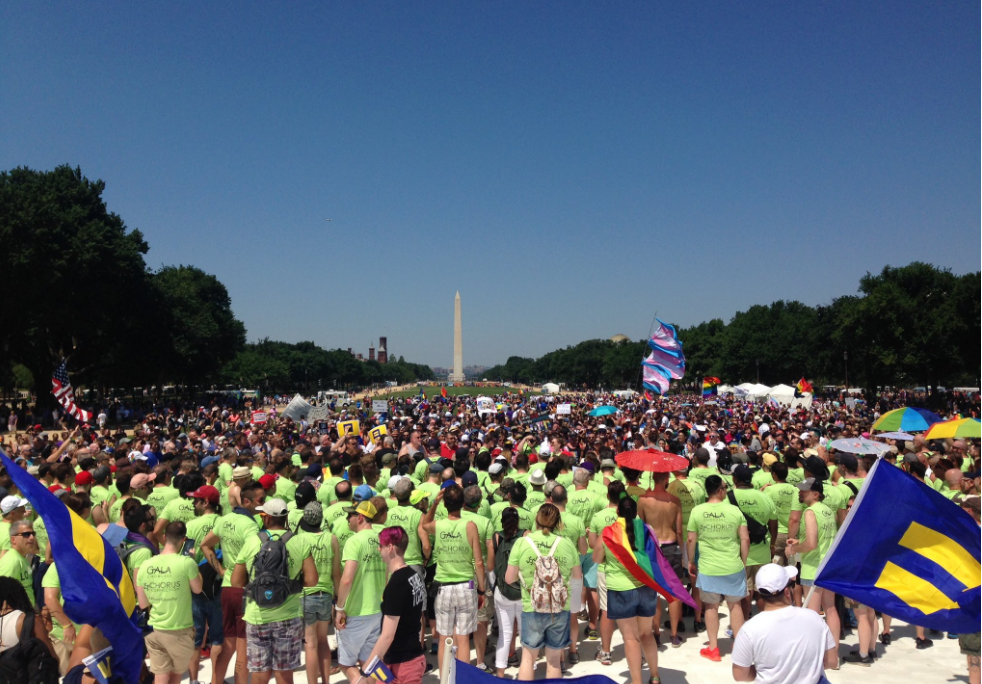 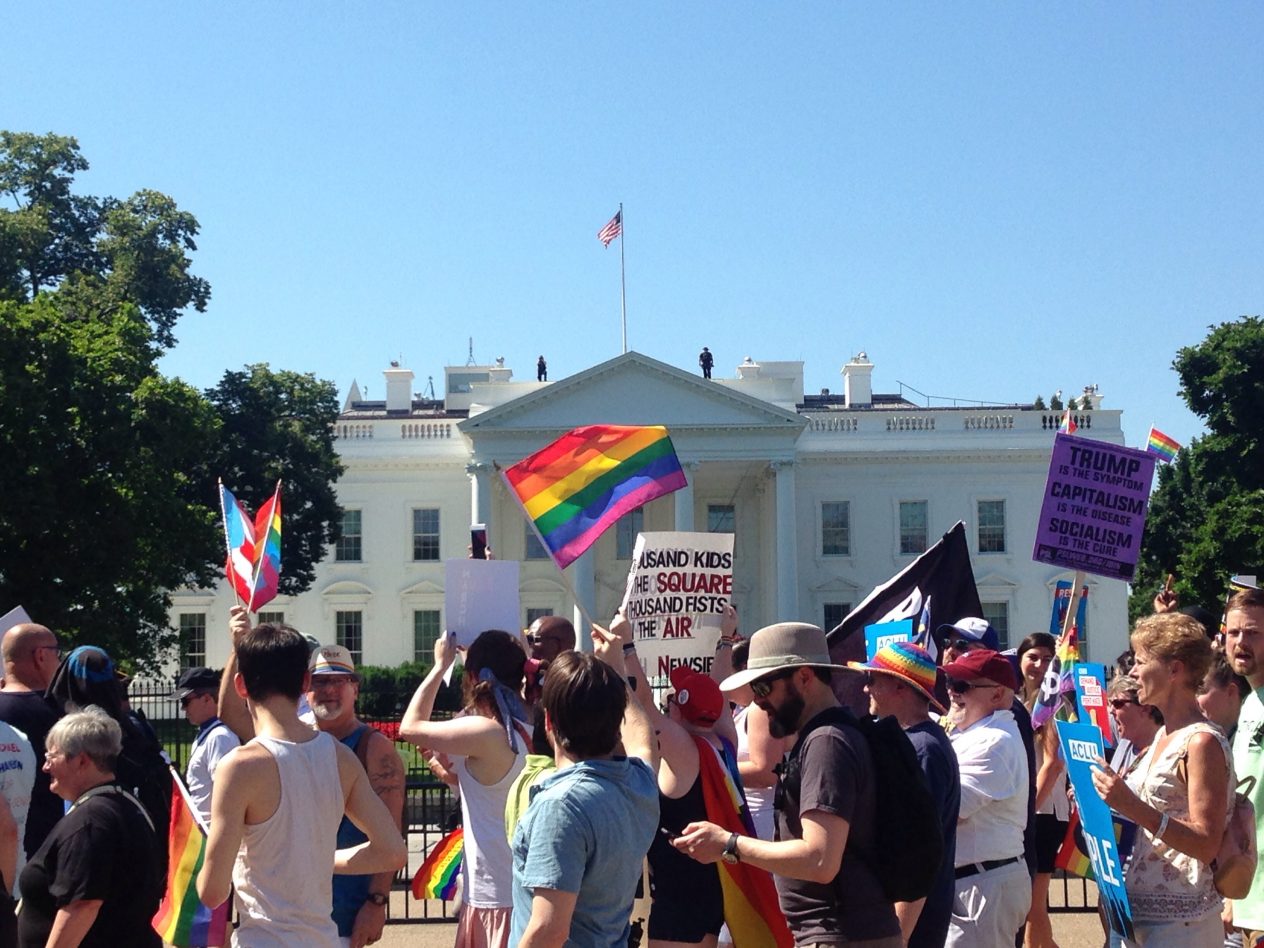 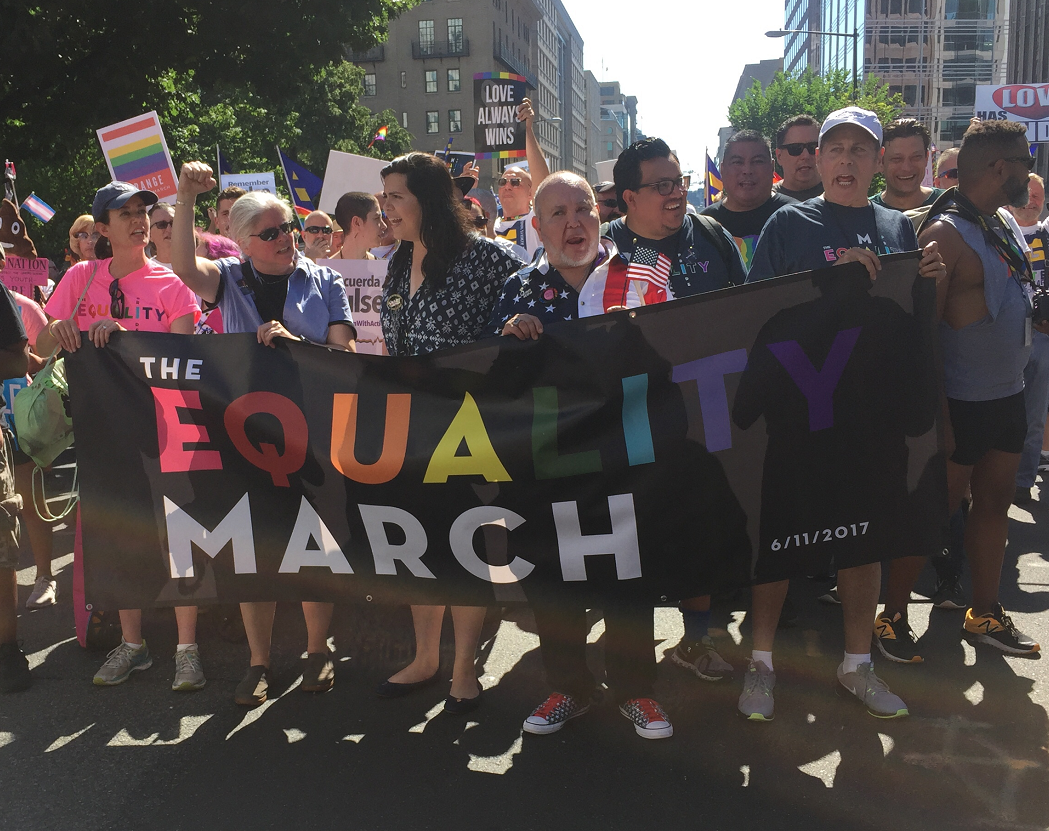 People gather for the Equality March for Unity and Pride in Washington, D.C., on June 11, 2017. Photo by Michelle Harven 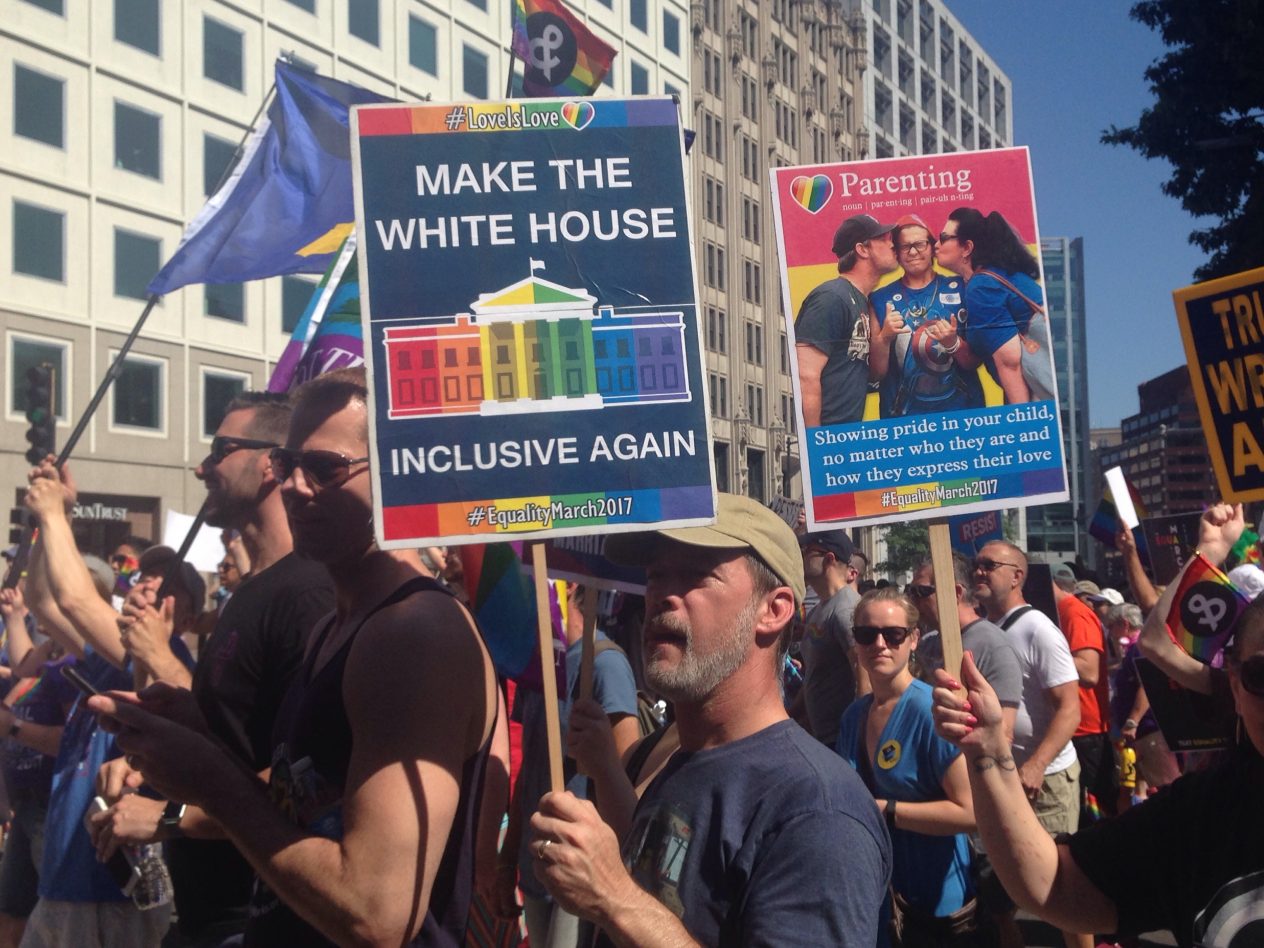 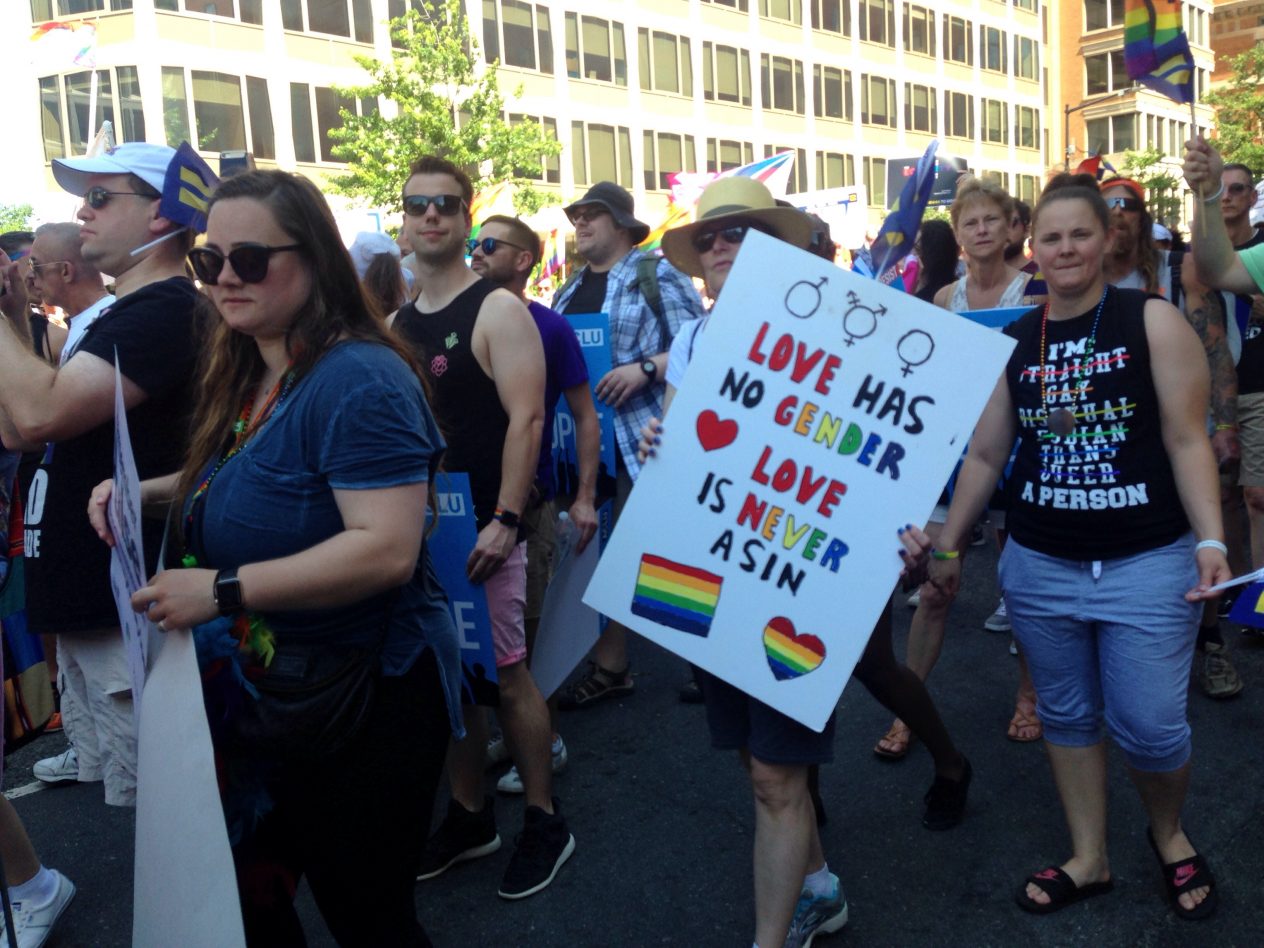 Dayana Morales Gomez and Michelle Harven contributed reporting. This article has been updated to reflect that the march was founded by David Bruinooge, not Daniel.

Left: People gather for the Equality March for Unity and Pride in Washington, D.C., on June 11, 2017. Photo by Michelle Harven