Likely deal to prevent shutdown would give Trump fraction of $5.7 billion wall money

WASHINGTON — Congressional bargainers are working toward a border security deal amid indications that the White House is preparing to accept a bipartisan agreement that would give President Donald Trump a fraction of the money he’s demanded for his proposed southern border wall.

Participants said they expect money for physical barriers to end up well below the $5.7 billion that Trump has sought to begin construction of the wall, which has attained iconic significance for him and his conservative supporters. Underscoring the clout he’s lost during a battle that’s dominated the opening weeks of divided government, the amount seems sure to fall much closer to $1.6 billion, the participants said, a figure that was in a bipartisan Senate bill last year.

An agreement would also avert a new partial federal shutdown next weekend. Trump has warned he might trigger a new closure of agencies if he doesn’t get his way, but that threat has become toothless because of solid opposition from GOP lawmakers burned by the record 35-day closure that he initiated in December.

READ NEXT: Why Trump’s offer to end the shutdown is being called a ‘non-starter’

One White House aide said Trump was expected to back whatever compromise emerges and acknowledged there is no will among congressional Republicans for another shutdown. The aide spoke on condition of anonymity to describe internal discussions.

Coupled with a widespread expectation that the agreement would not use the term “wall,” the pact would represent a significant retreat for Trump, for whom “Build the wall!” has been a battle cry since his presidential campaign.

Democrats seemed to draw a firm line on spending.

“Throughout the talks, Democrats have insisted that a border security compromise not be overly reliant on physical barriers,” said Evan Hollander, spokesman for Democrats who control the House Appropriations Committee. “We will not agree to $2 billion in funding for barriers.” 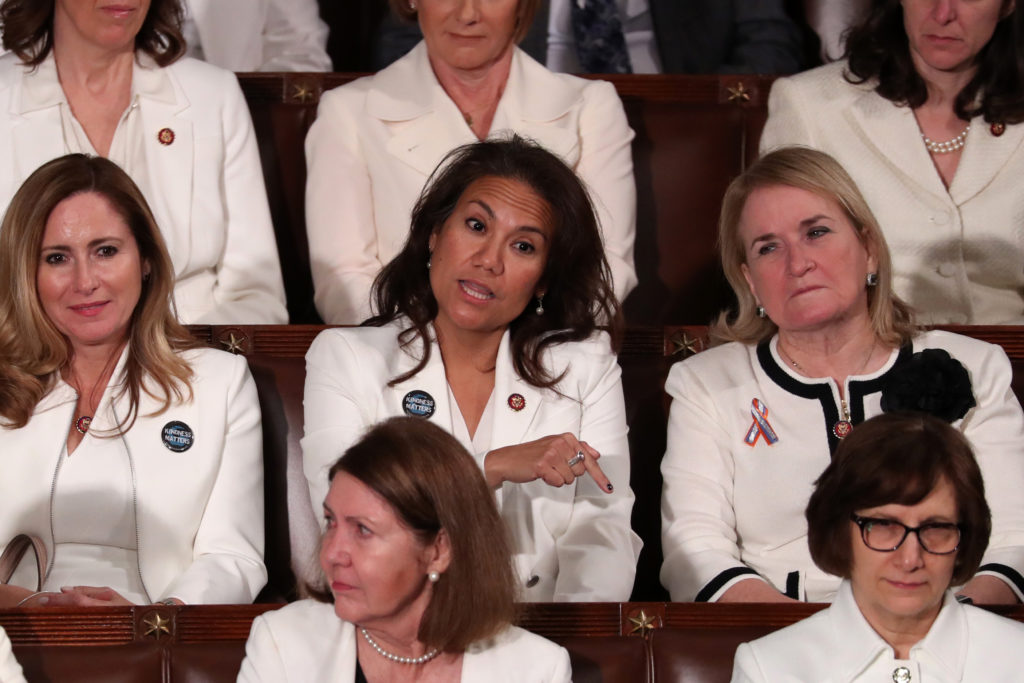 Rep. Veronica Escobar (D-TX) reacts as U.S. President Donald Trump claims that El Paso, Texas, has become safer due to a wall along the border with Mexico as he delivers his second State of the Union address to a joint session of Congress at the U.S. Capitol in Washington, U.S. February 5, 2019. Photo by Jonathan Ernst/Reuters

In another signal that Trump was reluctantly preparing to give ground, the White House has been considering accepting the deal but also using executive action to secure additional barrier funding without lawmakers’ approval. That plan was described by two people familiar with White House thinking who spoke on condition of anonymity because they were not authorized to speak publicly. Depending on what Trump does, such an action could spark lawsuits or congressional votes of disapproval.

Trump supporters have said there are other executive powers Trump could use to divert money from the budget to wall construction, though it was unclear if they would face challenges in Congress or the courts. One provision of the law lets the Defense Department provide support for counter-drug activities.

Besides the dollar figure, talks were focusing on the type and location of barriers, participants said. Also in play were the number of beds the federal Immigration and Customs Enforcement agency could have for detained migrants and the amount of aid included for natural disaster relief.

Money for high-tech surveillance equipment and more personnel was also expected to be included.

No one ruled out last-minute problems, especially with Trump’s penchant for head-snapping turnabouts. But the momentum was clearly toward clinching an agreement that Congress could pass by next Friday. The next day, many government agencies would run out of money and have to close again without a deal.

Rep. Mark Meadows, R-N.C., who leads the hard-right House Freedom Caucus, said he spoke Thursday night to Trump, who he said was in “wait and see” mode. Meadows said he expects an agreement to provide an amount closer to $1.6 billion.

“I’m not optimistic it’ll be something the president can support,” Meadows said.

A conservative House GOP aide said Freedom Caucus members wanted at least $2 billion for barriers and no restrictions on new construction, land acquisition or new types of barriers that could be built.

The aide also said the agreement need not contain the term “wall,” a word that Trump has lately alternated between embracing and abandoning. The aide spoke on condition of anonymity to describe private talks.

If there is a bipartisan deal, there would likely be enough votes to pass it without the most conservative Republicans or the most liberal Democrats.

Left: Workers on the U.S. side, work on the border wall between Mexico and the U.S., as seen from Tijuana, Mexico, December 14, 2018. Photo by Mohammed Salem/Reuters