Soon after Netflix aired a documentary about one of the country’s deadliest prison uprisings, Ohio corrections revoked the email and phone privileges of a man on death row for appearing in it.

The documentary disclosed that it did not have permission to record Siddique Abdullah Hasan at the state penitentiary in Youngstown for its first episode of “Captive,” which reenacts the 1993 Lucasville uprising — but Hasan is the one being punished. The episode aired in December and shows him talking about some of the issues leading up to the uprising. Then in February, correctional officers handed him a conduct report that said he had been in an unauthorized video.

“You’re telling me I’m not allowed to talk about my case?” Hasan said in a phone interview with the NewsHour in February. “You got to be 14-karat crazy.”

About a week later and after a formal hearing, the facility decided to suspend his phone and email privileges, according to his case lawyer Rick Kerger.

A federal lawsuit claims that the incident is illustrative of the discrimination that Hasan and others have faced since they were accused by the government and convicted of being the organizers of the uprising more than 20 years ago. On Friday, lawyer Raymond Vasvari filed further details in his case at the Southern District of Ohio court about the state’s alleged attempt to silence inmates affiliated with the uprising by prohibiting on-camera and face-to-face interviews.

Hasan and others have consistently been denied requests for visits from the media, the lawsuit claims, while other inmates who are unaffiliated with Lucasville but have the same security clearance have not. Even though they are allowed to write and talk on the phone to media, prohibiting video and in-person interviews is a tool to block investigations into what exactly happened during the uprising, Vasvari wrote in the filing.

“Permitting face-to-face media access,” Vasvari wrote in Friday’s response to the defendants, “would facilitate the search for truth, in the best traditions of the First Amendment.”

The Ohio attorney general’s office maintains that it restricts Hasan because he “uses media access to encourage support, both internally and externally, for organized group disturbances,” and to “justify his own actions.”

It also claims that allowing Hasan and others to appear on TV could exacerbate trauma felt by the 19 state-registered victims – those who were harmed as well as their friends and relatives.

Vasvari says both those arguments support his: that Hasan and others are being denied media access based on what they might say, which constitutes discrimination.

“It’s content-based,” he said. “You can’t moderate among potential speakers based on the content or the expected content of what they’re going to say.”

Why was there an uprising?

Like many other rebellions, it’s hard to decipher one single cause of the uprising in Lucasville, Ohio. Instead, author Staughton Lynd, a lawyer and historian who taught at Yale University and spent years investigating Lucasville, relies on history.

The Southern Ohio Correctional Facility in Lucasville opened in 1972 to replace an old penitentiary that also experienced uprisings and it quickly established a reputation for being rife with violence and abuses.

By 1978, at least two inmates were so aggrieved about the conditions that they cut off their fingertips and sent them to President Jimmy Carter, with a plea to give up their citizenship and emigrate. It didn’t work.

Another inmate helped write a petition to send to Amnesty International, describing “instances in which prisoners were chained to cell fixtures, subjected to chemical mace and tear gas, forced to sleep on cell floors and brutally beaten.”

“The petition was confiscated as contraband and its authors were charged with ‘unauthorized group activity’,” Lynd wrote in his book, “Lucasville: The Untold Story of a Prison Uprising.”

By 1989 the state’s Correctional Institution Inspection Committee was asked to prepare a summary of concerns. Having interviewed more than 100 people, the committee warned of the potential for major disturbances “unlike any ever seen in Ohio prison history.”

Meanwhile, the inmates continued to pour in. By April 11, Easter Sunday of 1993, a facility that was built to house 1,540 prisoners had a population of more than 1,800, and 75 percent of the prisoners at the highest security level were double-celled. 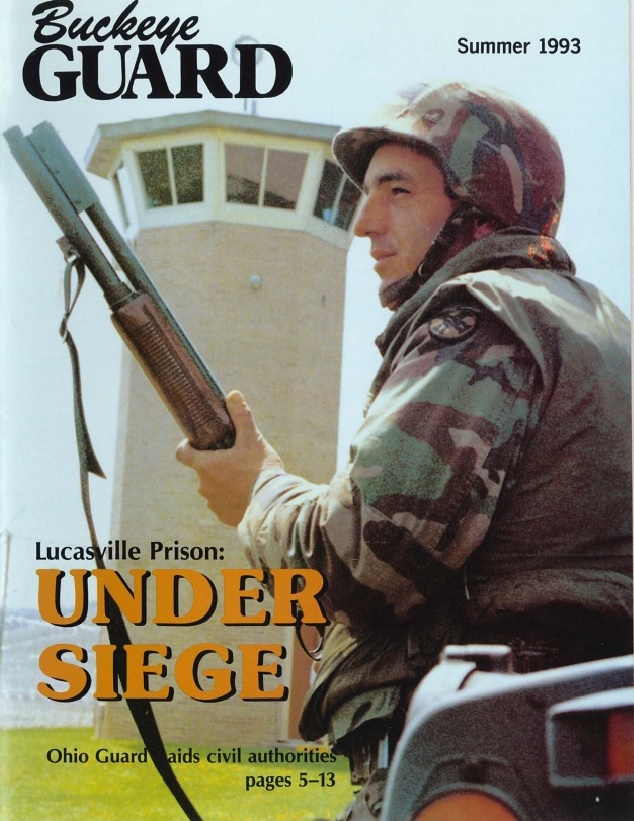 Front page of “Buckeye Guard,” the Ohio National Guard’s publication, on the summer of 1993 after the Lucasville uprising.

That afternoon, while some of them were on their way back from the yard, they overthrew officers on duty. During the initial chaos, six prisoners were killed and eight correctional officers were taken hostage.

More than 800 Ohio law enforcement agents – from the State Highway Patrol, army and air National Guard, and corrections – joined the effort to shut it down. By Wednesday, the inmates had warned of murder by hanging sheets with messages out the window if the water and electricity was not restored among other demands.

Then on Thursday, they brought the body of Officer Robert Vallandingham to the yard.

It was on the 11th day that a lawyer the inmates had asked to represent them facilitated a compromise. There were more than 400 people inside, and they surrendered under the condition the whole thing would be monitored, among other concerns. By then, nine inmates had died in addition to Vallandingham amid millions of dollars worth of damage.

Hasan, who had about a year left of his sentence for a carjacking, was one of five named in the tangled aftermath as the masterminds, known as the “Lucasville Five.” His punishment: death.

While he says in the documentary that part of what led to the rebellion was a new warden’s policy to test everyone for tuberculosis, which was against the Muslim religion, Lynd refers to a more complex anecdote.

“The words, ‘a long train of abuses,’ come from the Declaration of Independence,” Lynd wrote. “In writing about the Lucasville uprising, I have viewed it as a rebellion like the American Revolution.” 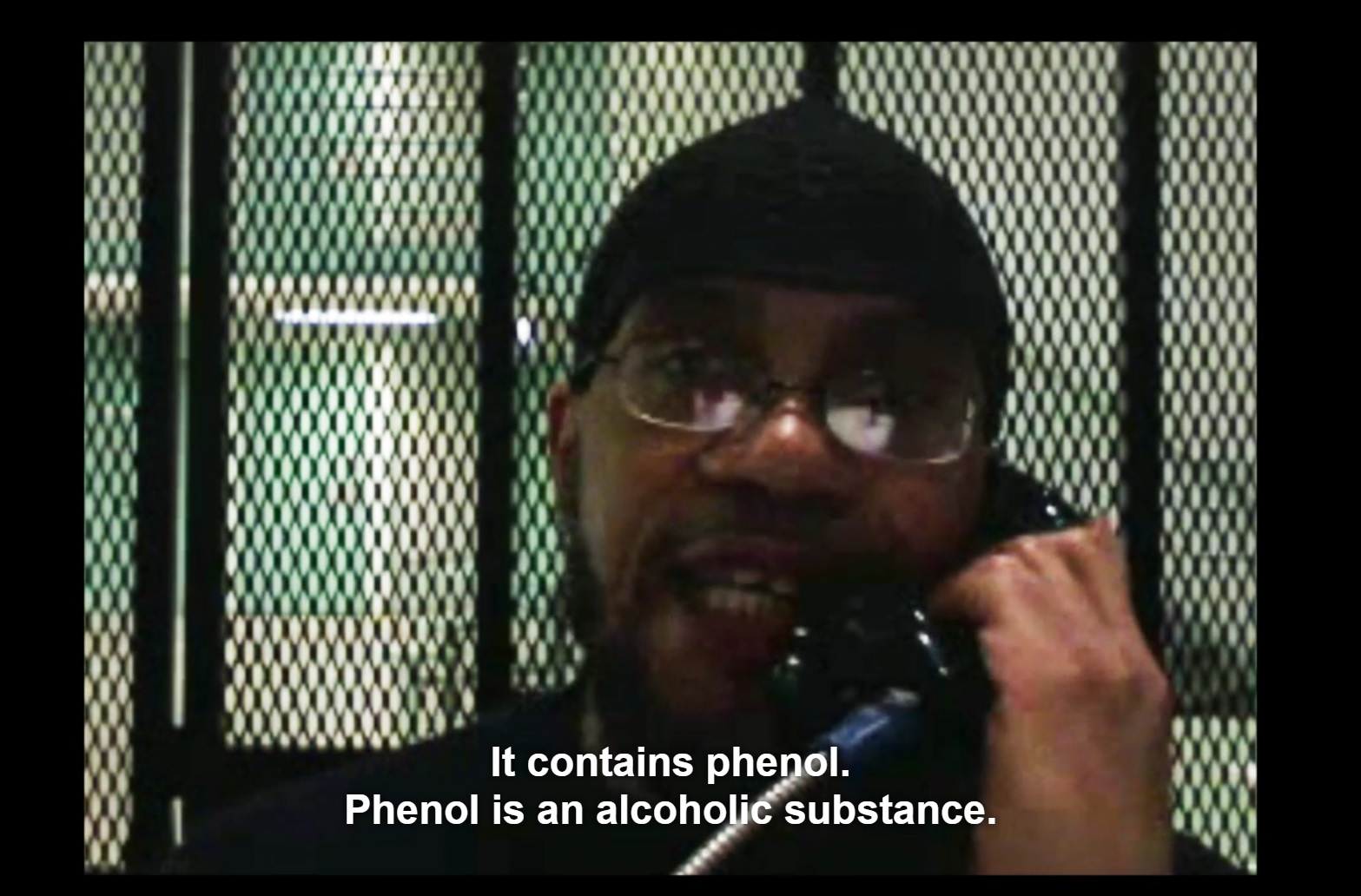 A screengrab of Siddique Abdullah Hasan from the first episode of Netflix documentary “Captive,” an interaction that correction facilities say was unauthorized.

There is no law that requires prisons to allow journalists or inmates in-face interviews. In fact, the U.S. Supreme Court ruled in 1974 that media has no greater right to access prisons than the general population.

And since there isn’t a strong precedent, every correctional department can make its own, often more restrictive rules about freedom of information and speech if it successfully argues that the rules preserve security. Virginia and Michigan bar prisoners from making freedom of information requests. Texas was the latest to prohibit inmates from having social media accounts.

Such laws can be antithetical to the whole democratic system – the free press is supposed to investigate how government agencies work, said David Fathi, director of the American Civil Liberties Union’s National Prison Project.

“When you have prisons walled off or the media walled off from prisons, you’re going to have bad things happen,” Fathi said.

Fathi quoted federal Judge Damon Keith, who ruled in 2002 that the Bush administration acted unlawfully in holding deportation hearings in secret whenever the government thought the people involved might be linked to terrorism.

Still, even when prisons might make it more difficult for journalists and prisoners to interact, the rules have to be even-handed. Preventing outlets from interviewing inmates based on the expected content is unconstitutional, he said.

“You can’t only allow in the reporters you like, who will write fawning, admiring pieces and keep out those who you think will be critical,” he said. “That, as I understand it, was basically the claim in the Ohio case.” 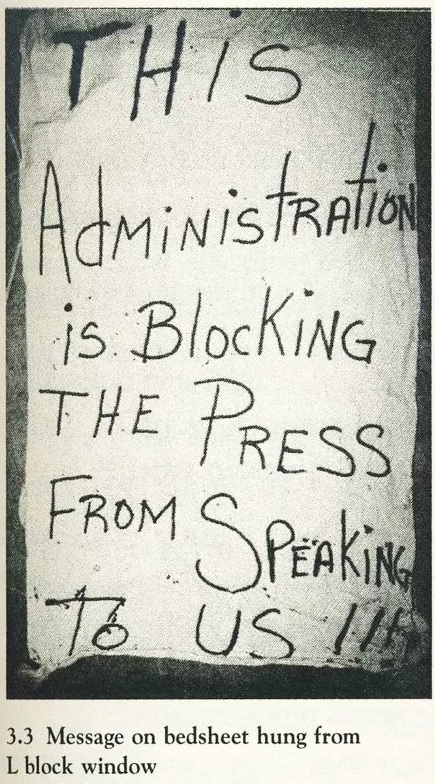 A scanned copy of a picture in Staughton Lynd’s book, “Lucasville: The Untold Story of a Prison Uprising.”

Hasan said the woman who taped him was approved for his visitation list by corrections. They talked through the prison’s video messaging system. She made it clear to him that she was interviewing him about the uprising for a documentary, but he did not see a camera or know the conversation was filmed, he said.

“You can’t hold me responsible for something I didn’t do myself,” he said. “Y’all trying to excommunicate me.”

About 10 minutes into the episode, right before it introduces Hasan and he starts talking about the tuberculosis test, an on-screen disclaimer reads, “Permission to film them was denied.”

The woman who taped it deferred the NewsHour to a “Captive” spokesperson, who wrote in an email, “the commentary makes clear that the prison authorities did not authorise interviews.”

An Ohio corrections spokesperson echoed the sentiment in an email saying that, “This interview was conducted unofficially using the prison video-visitation system. Recording the video visit is a violation of the visitation policy.”

Neither provided further comment or responded to questions about whether the producers of the documentary had been contacted by corrections.

Vasvario said the state has two weeks to respond to his filing.