At least 50 people were killed and 53 were injured at a popular gay nightclub in Orlando, Florida, when a shooter opened fire early Sunday morning before being killed hours later after a standoff with police.

“Everyone get out… and keep running,” the nightclub Pulse posted on its Facebook page at 2:09 a.m.

Speaking at a press briefing on Sunday, President Barack Obama called the shooting, the deadliest in U.S. history, an act of “terror and an act of hate.”

“Today, as Americans, we grieve the brutal murder — a horrific massacre — of dozens of innocent people,” he said. “This is an especially heartbreaking day for all our friends — our fellow Americans — who are lesbian, gay, bisexual or transgender.”

The shooter, identified by officials as 29-year-old Omar Saddiqui Mateen, reportedly traveled to Orlando from his home in Port Saint Lucie, about 120 miles south of Orlando.

The Islamic State group claimed responsibility for the attack on Sunday through its news agency, though two American officials told Reuters that there no evidence of a direct link to the terrorist organization, a point reiterated by Obama on Sunday.

Matteen’s father, Mir Seddique, told NBC News that he believed the shooting “had nothing to do with religion.”

“We are saying we are apologizing for the whole incident,” Seddique said. “We weren’t aware of any action he is taking. We are in shock like the whole country.”

Speaking at a press conference on Sunday, Orlando Police Chief John Mina said 11 of his officers engaged in a gun battle with Mateen before he was killed at approximately 5 a.m. on Sunday.

“There’s a lot of victims inside,” Mina said of the crime scene.

Officials said they are not actively looking for another suspect. 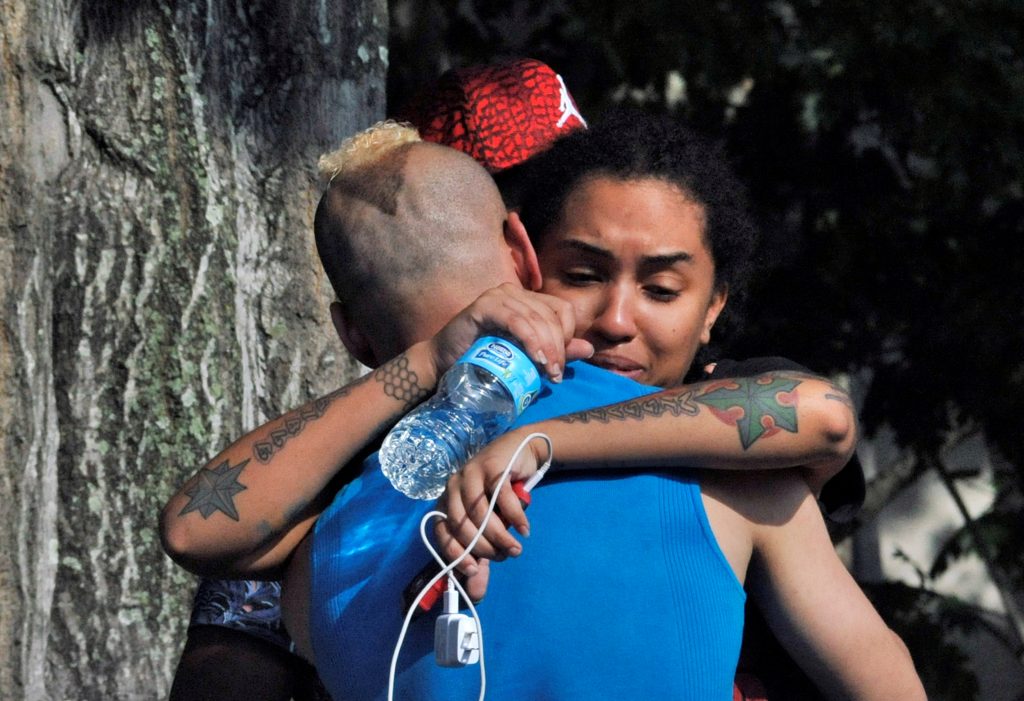 Friends and family members embrace outside the Orlando Police Headquarters during the investigation of a shooting at the Pulse nightclub in Orlando, Florida on June 12, 2016. Photo by Steve Nesius/Reuters

FBI Assistant Special Agent in Charge Ronald Hopper said Mateen had called 911 before the attack and mentioned the Islamic State during the call, though Hopper would not confirm some media reports that Mateen had pledged allegiance to the self-proclaimed caliphate.

Hopper said the FBI had investigated Mateen, a U.S. citizen born in New York, in 2013 and 2014 after he made comments that worried his coworkers. The interviews were “inconclusive.”

The shooter was still able to purchase at least two guns during the week leading up to his rampage on Sunday, including a handgun and a “long gun,” a special agent with the Bureau of Alcohol, Tobacco, Firearms and Explosives said. 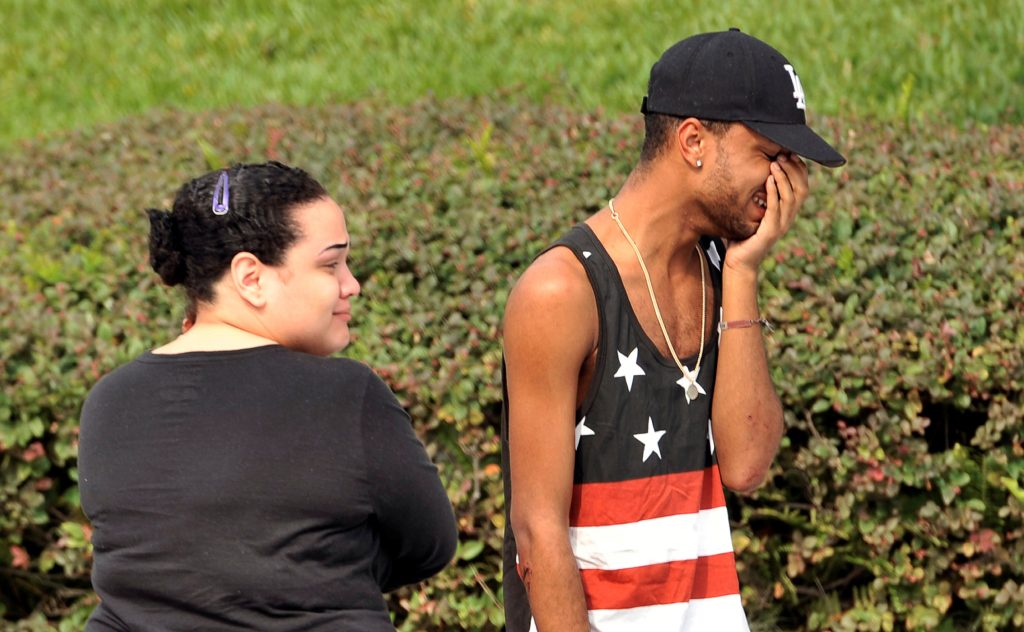 Friends and family members embrace outside the Orlando Police Headquarters during the investigation of a shooting at the Pulse nightclub in Orlando, Florida, on June 12, 2016. Photo by Steve Nesius/Reuters

President Obama pledged the support of the federal government for local authorities in Orlando and lauded the quick response of law enforcement officials at the scene of the shooting, saying “their courage and professionalism saved lives.”

Flags at the White House were lowered to half-mast, and Florida Gov. Rick Scott has declared a state of emergency for Orange County.

Hundreds of people flocked to local blood banks to give blood in Orlando and the city government set up an online list of some of the victims.

“We are a strong resilient community. Tonight we have had a crime that will have a lasting effect on our community we need to stand strong, we need to be supportive of the victims and their families,” Dyer said during a news conference. “This is a time we should all come together.” 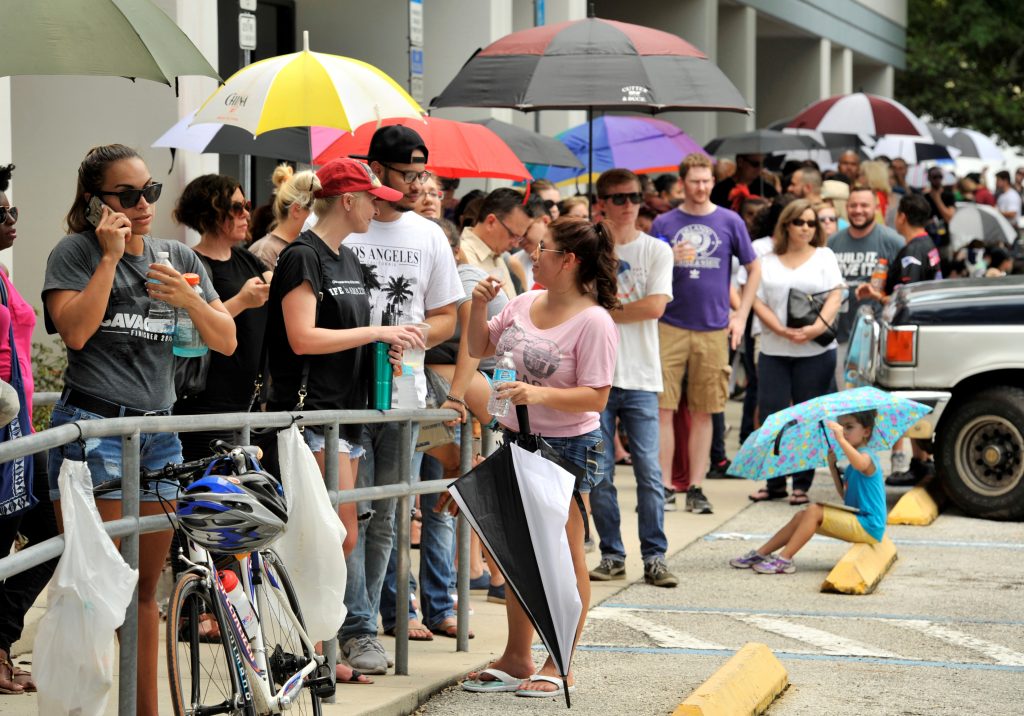 Hundreds of community members line up outside a clinic to donate blood after an early morning shooting attack at a gay nightclub in Orlando, Florida, U.S June 12, 2016. Photo by Steve Nesius/Reuters

As the nation mourned on Sunday, and dozens of people grieved the loss of friends and relatives, leaders of the LGBT community spoke out against the deadly shooting.

“Though details are still emerging, an attack during Pride Month against Pulse, an iconic gathering place for LGBT Floridians, has a particularly insidious impact on our entire community,” he said. “Our thoughts and prayers are with everyone affected by this tragedy.”

A Go Fund Me page launched by Carlos Smith, a government affairs manager for Equality Florida Action, Inc., an advocacy group for LGBT rights, raised more than $500,000 for the victims in seven hours on Sunday.

Left: Friends and family members embrace outside the Orlando Police Headquarters during the investigation of a shooting at the Pulse night club, where as many as 20 people have been injured after a gunman opened fire, in Orlando, Florida, U.S June 12, 2016. Photo by Steve Nesius/Reuters