Tornado kills 2 people and injures 29 others in Oklahoma

EL RENO, Okla. — A tornado leveled a motel and tore through a mobile home park near Oklahoma City overnight, killing two people and injuring at least 29 others, authorities said Sunday.

The twister touched down in El Reno, about 25 miles west of Oklahoma City, late Saturday night. It crossed an interstate and walloped the American Budget Value Inn before ripping through the Skyview Estates trailer park, flipping and leveling homes, Mayor Matt White said at a news conference.

“It’s a tragic scene out there,” White said, adding later that, “People have absolutely lost everything.” He said the city established a gofundme site, the City of El Reno Tornado Relief Fund, to raise money to help affected families.

The two people who were killed were in the mobile home park, White said. Everyone at the motel was accounted for, but searchers were still going through the mobile home park. Many of the people living there are Hispanic and don’t speak English, which has complicated the rescue efforts, he said.

The 29 people who were injured were taken to hospitals, where some were undergoing surgery, the mayor said. Some of the injuries were deemed critical, he said.

“The thing about El Reno is we are more than a community, we are a family. … We’re going to overcome this. It’s so devastating to see the loss out there,” he said. 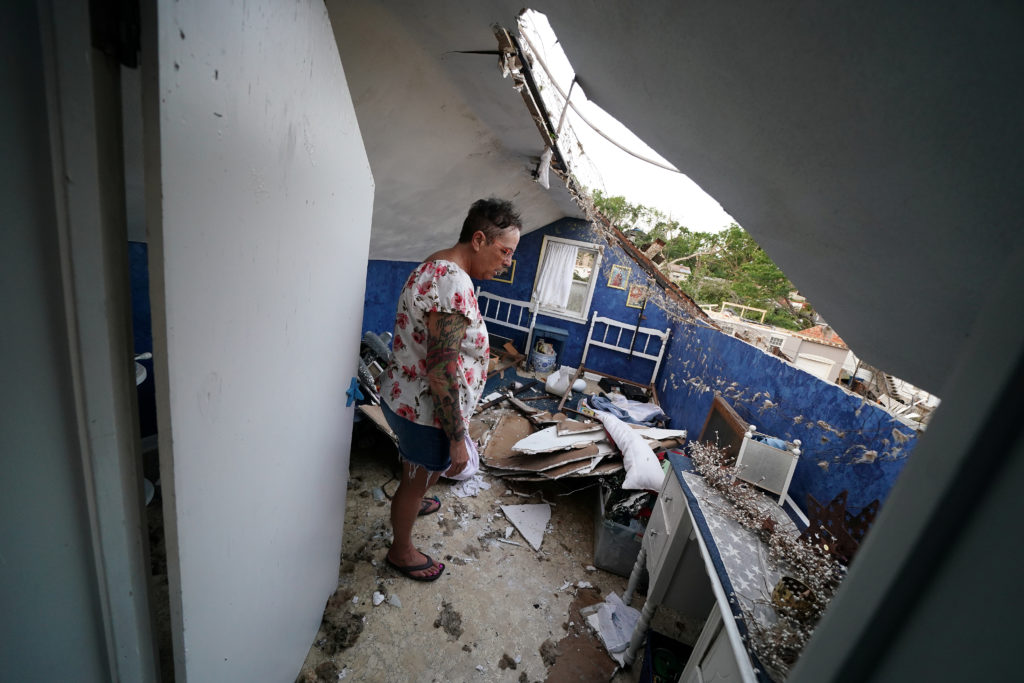 Gwen McGeorge stands in disbelief on the second level of her home following a tornado in Jefferson City, Missouri, on May 23. Photo By Carlo Allegri/Reuters

April Sandefer, a spokeswoman for the University of Oklahoma Medical Center, said the hospital has treated 13 patients who were injured during the tornado. She declined to disclose the severity of the injuries or to say how many of the patients, if any, were admitted.

National Weather Service personnel were assessing the damage, but the agency gave the twister a preliminary EF-2 rating, which would mean it had wind speeds of 111-135 mph (179-217 kph).

White didn’t give details about the two people who were killed.

The tornado was spawned by a powerful storm system that rolled through the state — the latest in a week of violent storms to hit the flood-weary Plains and Midwest that have been blamed for at least 11 deaths, including the two killed in El Reno.

Emergency crews on Sunday could be seen sifting through the rubble at the trailer park and motel, where the second story collapsed into a pile of debris strewn about the first floor and parking lot.

Tweety Garrison, 63, told the AP that she was in her mobile home with her husband, two young grandchildren and a family friend when the storm hit. She said when she heard the storm coming she immediately hit the ground. Moments later, she heard her next-door neighbor’s mobile home slam into hers before it flipped over and landed on her roof.

Garrison said the incident lasted five to 10 minutes and that she received a tornado warning on her phone but the sirens didn’t go off until after the twister hit. 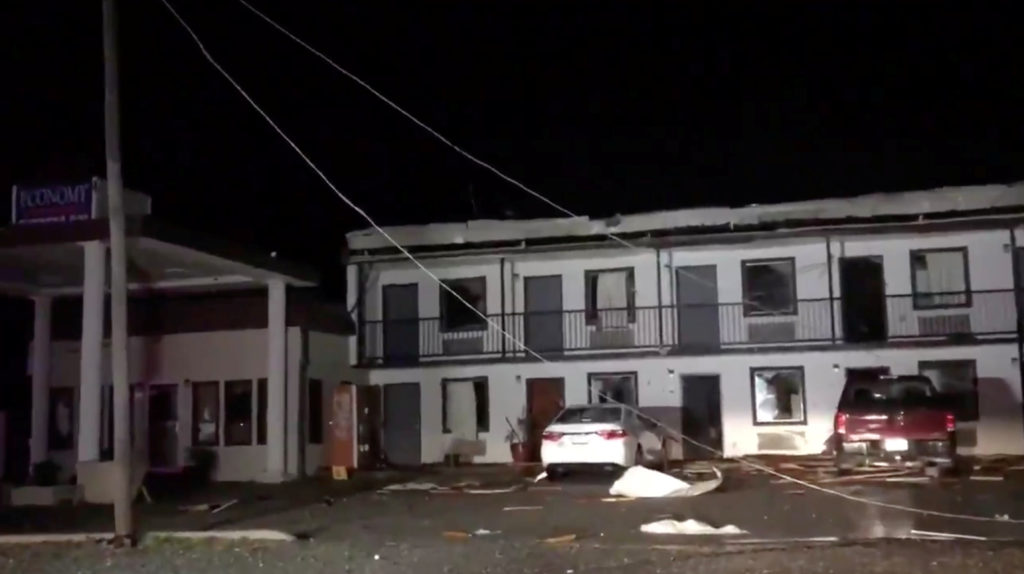 Debris lies near a damaged building after a tornado touched down in El Reno, Oklahoma, on May 26, 2019 in this still image taken from social media video. Photo By Gale Vancampen via Reuters

Her 32-year-old son, Elton Garrison, said he heard the wailing tornado sirens and had just laid down at home about a half-mile (1 kilometer) away when his phone rang. He recognized his mother’s number, but there was no voice on the other end when he answered. “I thought, ‘That’s weird,'” he said.

Then his mother called back, and delivered a chilling message: “We’re trapped.”

He said when he arrived at his parent’s home, he found it blocked by debris and sitting with another trailer on top of it. He immediately began clearing a path to the home so that he could eventually lift a portion of an outside wall just enough so that all five occupants could slip beneath it and escape.

“My parents were in there and two of my kids, one 9 and the other 12 … my main emotion was fear,” said Elton Garrison, who has lived in El Reno for about 26 years. “I couldn’t get them out of there quick enough.”

He said he wasn’t alarmed by the warning sirens when he first heard them at home.

“We hear them all the time here, so it didn’t seem like a big deal. … I heard a lot of rain with the wind. But when it kind of got calm all of a sudden, that’s when it didn’t feel right.”

He said his parents had only recently recovered after losing their previous home to a fire a few years ago.

“Now this,” he said, before expressing gratitude that everyone inside his parents’ home had emerged without serious injury.

In the next breath, he added: “Items can be replaced. Lives can’t.”
The storm is the latest to hit the flood-weary central U.S. and dumped yet more rain in the region’s already bloated waterways. In Tulsa, Oklahoma’s second-largest city, authorities advised residents of some neighborhoods on Sunday to consider leaving for higher ground because the Arkansas River is stressing the city’s old levee system.

Downriver and about 100 miles southeast of Tulsa in Arkansas’ second-largest city, Fort Smith, authorities said Saturday that 100 to 200 people had already evacuated their homes due to flooding, which was expected to get worse in the coming days.

Left: Debris covers the American Best Value Inn after it was destroyed by a tornado which touched down overnight in El Reno, Oklahoma, U.S. May 26, 2019. Photo By Alonzo Adams/Reuters