WASHINGTON — Melania Trump lit up when a 3-year-old boy darted out of “Family Unit 8” at a migrant center in Tucson, Arizona.

“Hello!” said the first lady, brightening amid the semicircle of eight cells in a short-term holding center for migrants. “How are you?”

Mrs. Trump, an immigrant and a mother herself, wanted to find out more about how her husband’s strict immigration policy was playing out on the ground, especially among families that have been separated at the border. Two tours of migrant detention centers in a week gave her a sometimes grim view.

Now the question is what she does with that knowledge — and how she meshes it with her dislike for dividing up families and a concurrent belief in strong borders.

Spokeswoman Stephanie Grisham says more border visits or talks with lawmakers are possible, but it’s not clear what lessons the first lady took from her visits and what she’ll communicate to her husband.

“She cares about children deeply,” Grisham said. “She also believes in strong border laws and treating everybody equally.”

The first lady has given her husband her views on controversial political issues throughout his presidency, but never in such a public way as with the issue of immigrant children.

Before her husband reversed himself and put a halt to separations at the border, Mrs. Trump’s office put out a statement saying the first lady “hates” to see families separated and expressing hope that “both sides of the aisle” can reform the nation’s immigration laws. She did not say whether she supports the president’s “zero tolerance” policy for criminally prosecuting those who cross the border illegally.

“This is a complex issue,” Grisham said. “She recognizes that.”

The sights and sounds of Mrs. Trump’s visits to border facilities in Texas and Arizona amounted to a hard-to-forget information file about the 2,000 children separated from their families nationally. 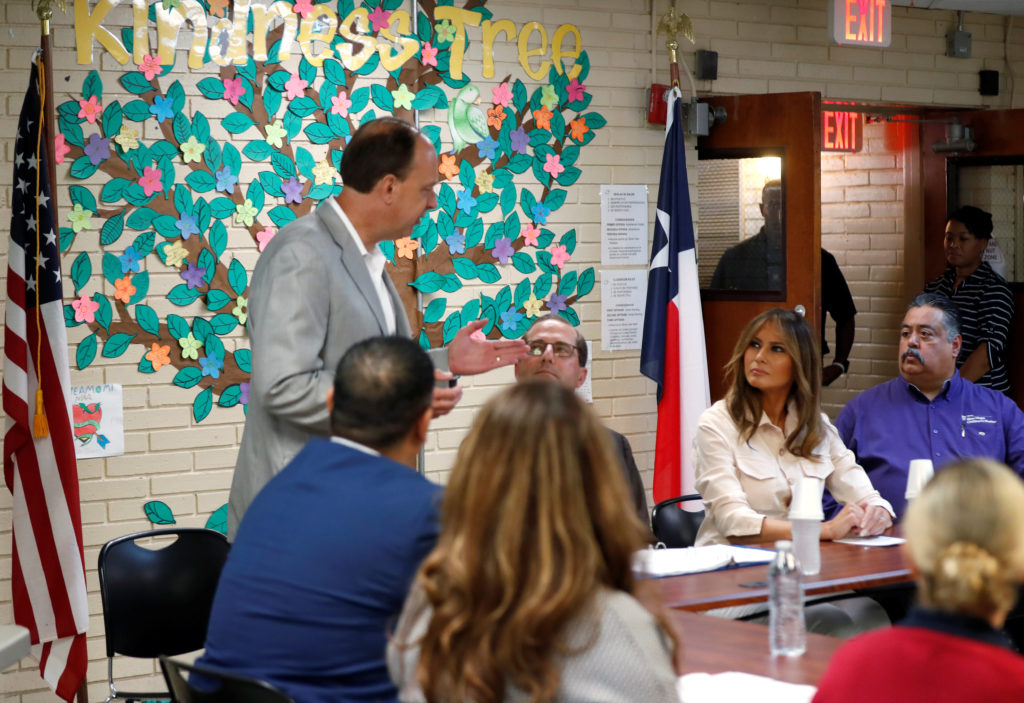 Thursday’s visits to a migrant center and a school provided Mrs. Trump with indelible images and facts on the perils for families crossing the desert, the challenges for law enforcement and what happens to illegal border crossers and their children when they are caught.

Despite the camera-ready nature of the events, some of the images were bleak: a cell block, doors open at the time, where minors are sorted into “Families,” ″Males” and “Processed” and “Unprocessed.” Six expressionless teenage boys seated on a bench outside their cell. A daycare for children under 2 and a few mothers — also minors.

At a Tucson roundtable with law enforcement officials responsible for hundreds of miles of border, the first lady asked how many children cross the desert alone. One official told her a 16-year-old was raped on her journey into the U.S. and gave birth in federal custody.

Rodolpho Karisch, chief patrol agent for the Tucson Sector Border Patrol, showed Mrs. Trump a picture that appeared to take her aback. He said it represented a 6-year-old boy crossing the desert alone with a soda bottle and a note. Reporters later learned that the boy is alive.

The first lady at times deliberately leaves her message unclear. 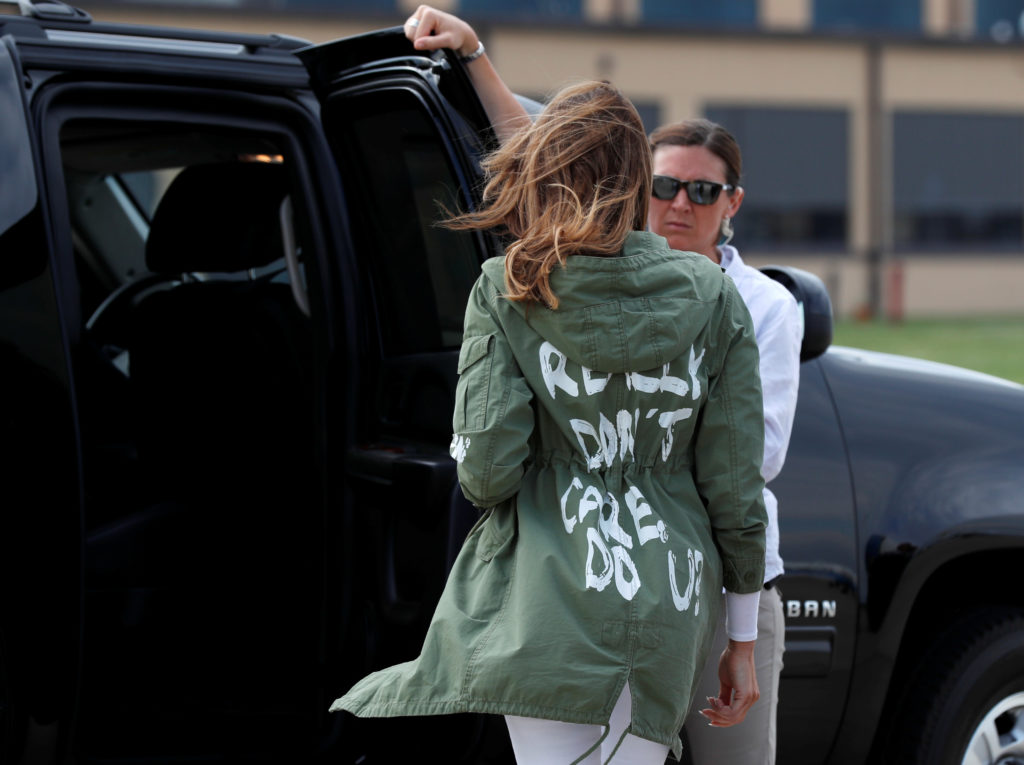 U.S. first lady Melania Trump walks from her plane to her motorcade wearing a Zara design jacket with the phrase “I Really Don’t Care. Do U?” on the back as she returns to Washington from a visit to the U.S.-Mexico border area in Texas, at Joint Base Andrews, Maryland, U.S., June 21, 2018. Photo by Kevin Lamarque/Reuters

On her first trip to the border, her choice of clothing left everyone scratching their heads, with the inscription on the back of her jacket that read, “I really don’t care, do u?”

On her second visit, her wardrobe was understated. But Mrs. Trump didn’t expound on her view of her husband’s immigration policy.

That didn’t stop critics of the Trump administration from lumping her in with her husband.

In Phoenix, as the first lady’s motorcade approached a sprawling Southwest Key migrant facility, protesters lined the sidewalk amid a big inflatable likeness of her husband, dressed in a white robe and holding a hood reminiscent of the Ku Klux Klan.

“Melania Trump is guilty, guilty, guilty!” the protesters chanted of the first lady, who is from Slovenia and came to the United States on a special visa during her modeling career.

Inside, she stopped at an air-conditioned trailer marked No. 4 that held 10 boys and girls around 5 years old.

“Do you like it here with some friends?” Mrs. Trump asked.

A few protesters screamed from a nearby balcony that overlooked the compound’s playground as Mrs. Trump’s retinue shifted buildings.

Then came perhaps the most sobering stop, to another cooled room containing nine babies and toddlers, and four of their moms.

Mrs. Trump stepped onto the carpet in her sneakered feet and squatted down to get closer to the children, still sleepy from recent naps. She glanced up toward the women standing nearby and asked, “Who are the moms?” One woman from Honduras raised a hand. “Where is your baby?” the first lady asked. A translator helped the young woman point out a boy, 14 months old. An official traveling with Mrs. Trump said there were 121 children there and their average stay was 48 days.

The balcony was empty by the time Mrs. Trump departed.

At the gates of the compound, some protesters tried briefly to jog alongside the first lady’s motorcade as it sped, lights flashing, toward the airport and the four-hour flight back to Washington.