Across the country, protesters rally to keep immigrant families together

As temperatures crept toward 90 degrees, tens of thousands of protesters shuffled across the Brooklyn Bridge on Saturday afternoon to denounce the Trump administration’s “zero-tolerance” immigration policy.

Crowds gathered in lower Manhattan before marching over the East River to Cadman Plaza, not far from the federal courthouse for the End Family Separation NYC Rally and March. It was one of more than 600 demonstrations taking place this weekend, from the nation’s capital to Appalachia. Thousands took to the streets to demand the end of the separation of immigrant children from their families, as well as implore voters to turn out for this year’s midterm elections. 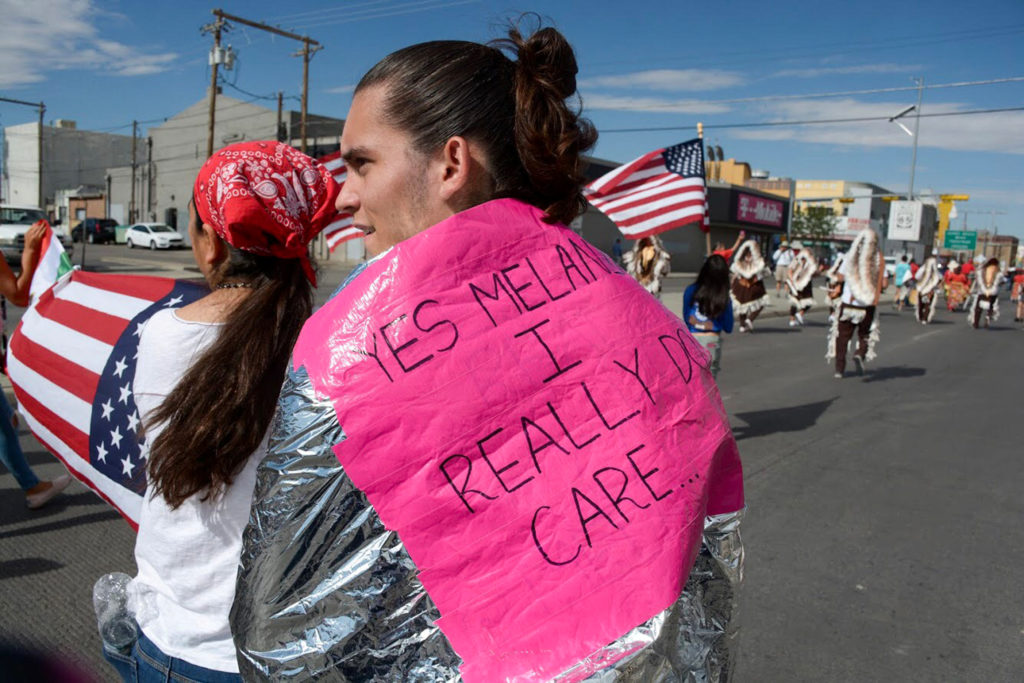 Carlos Espina, 19, wears a thermal blanket given to him by asylum seeker at a church where he volunteers, during a protest march in downtown El Paso, Texas, U.S. Photo by Reuters /Julio-César Chávez.

Carolina Perez of Long Island came to the United States from Chile.

“I’m an immigrant, I know what it’s like,” Perez said. “I hope today raises awareness and hopefully changes the minds of those in power.”

Under the “zero-tolerance” policy—announced in early May by Attorney General Jeff Sessions—anyone crossing the border without a visa, including people seeking asylum, would be prosecuted with a criminal offense for illegal entry.

In the following weeks, thousands of children, dubbed “unaccompanied minors,” were taken into government custody as their parents were detained in Immigration and Customs Enforcement (ICE) facilities and, in some cases, federal prisons. More than 2,700 undocumented children have been separated from their parents since the policy was put into effect. On June 20, amid public outrage, President Trump issued an executive order to halt the separations. However, more than 2,000 children are still separated from their parents.

Saturday’s coordinated effort was the culmination of a weeks-long campaign by Families Belong Together, the organization behind the June 30th day of action, to increase public pressure against the Trump administration’s crackdown at the border. 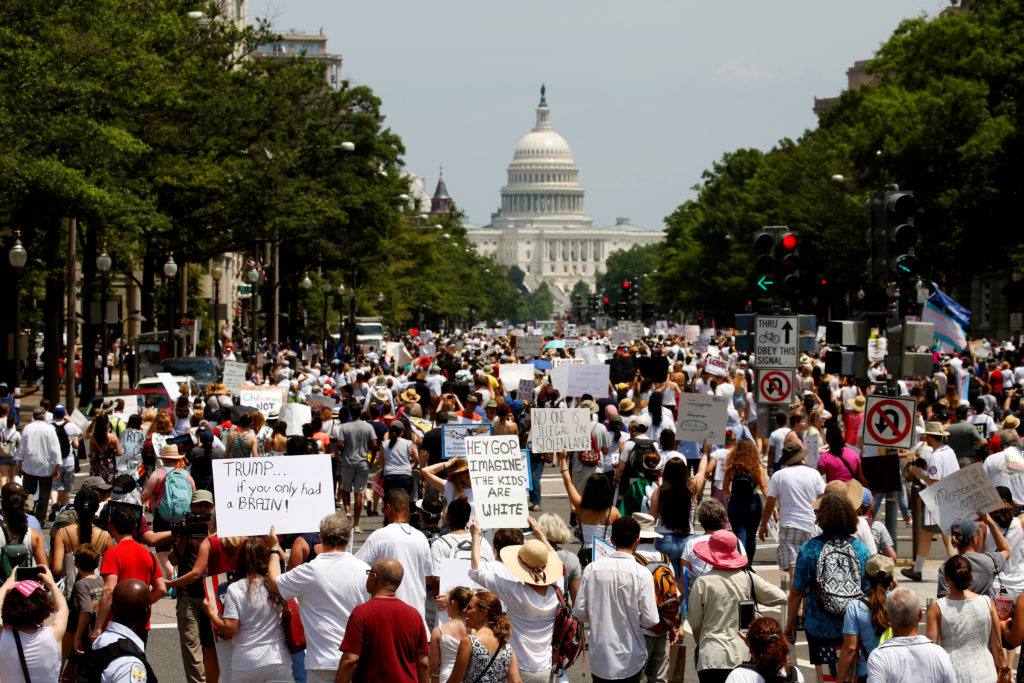 In Washington, D.C., more than 30,000 people gathered in Lafayette Square where shouts of “Shame!” rang through the crowd, according to NBC. In Atlanta, civil rights icon Rep. John Lewis (D) of Georgia echoed the spirit of the civil rights movement: “As a nation and a people we can do better,” Lewis said. “Don’t give up. Don’t give in. Keep marching.” And, near El Paso, Texas, thousands congregated near the border. There were also marches in more conservative regions like Wyoming and Kansas, and in cities large and small.

In New York, a cacophony of honking cars, beating drums, and impassioned chants filled the air.

Starting at 10 a.m., march organizer Carlene Pinto of the nonprofit New York Immigration Coalition, which advocates for refugee rights, energized the crowd in Foley Square with call-and-response cheers like, “When any New Yorker is under attack, what do we do? Stand up, fight back!” As they crossed the bridge, protesters sought refuge from the hot sun under handmade posters and umbrellas, and tourists squeezed by amid shouts of “Abolish ICE,” and “This is what democracy looks like.” 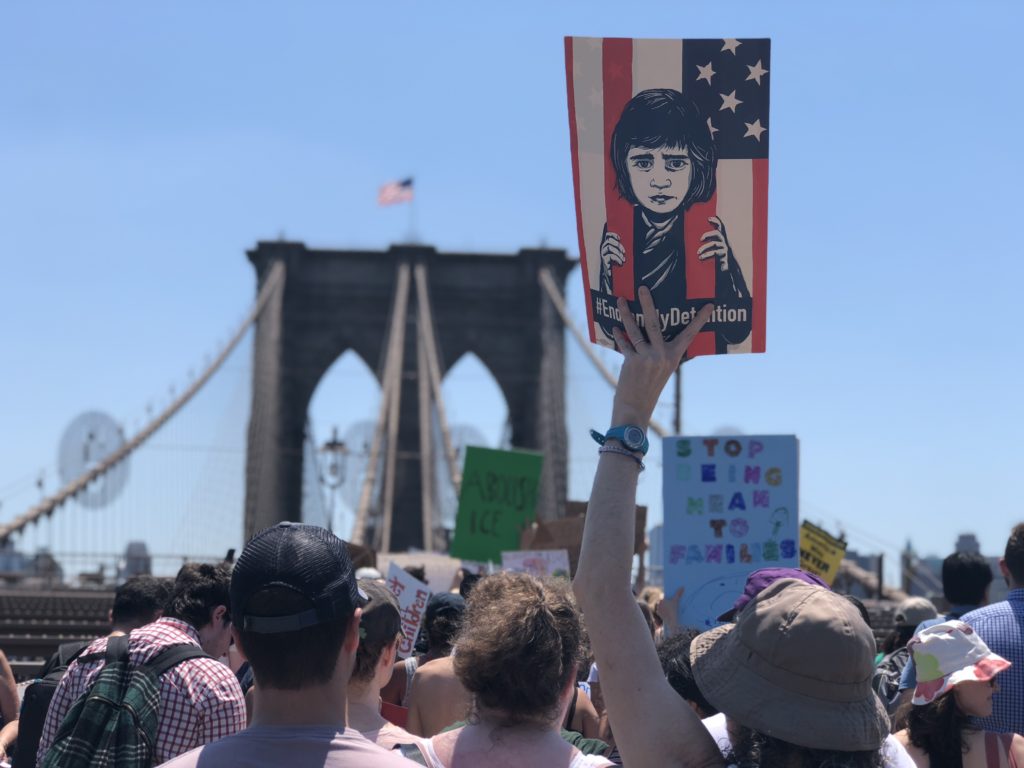 According to Anu Joshi, director of immigration policy at the nonprofit, New York has received more than 700 immigrant children who were separated from their families. For many New Yorkers, the issue hits close to home. “They feel it very deeply and personally,” Joshi said.

Richard Singh Jr. says it took him 20 years to immigrate to Queens from Guyana. “We have to fight for what we want,” Singh said. “No matter our demographic or political affiliation, we have good qualities as immigrants and refugees. We are here to contribute to this country.”

For Marilyn Mendoza of Queens, Saturday’s march is the first step in a movement. “Protesting and marching is good, but we need people to come out and help the community,” she said. “A lot of the organizations who did this event depend on donors to fund lawyers.”

Indigo Moore, a resident of Harlem, also hoped the protest would get people to care more: “You shouldn’t put babies in what has become 21st century internment shelters.” 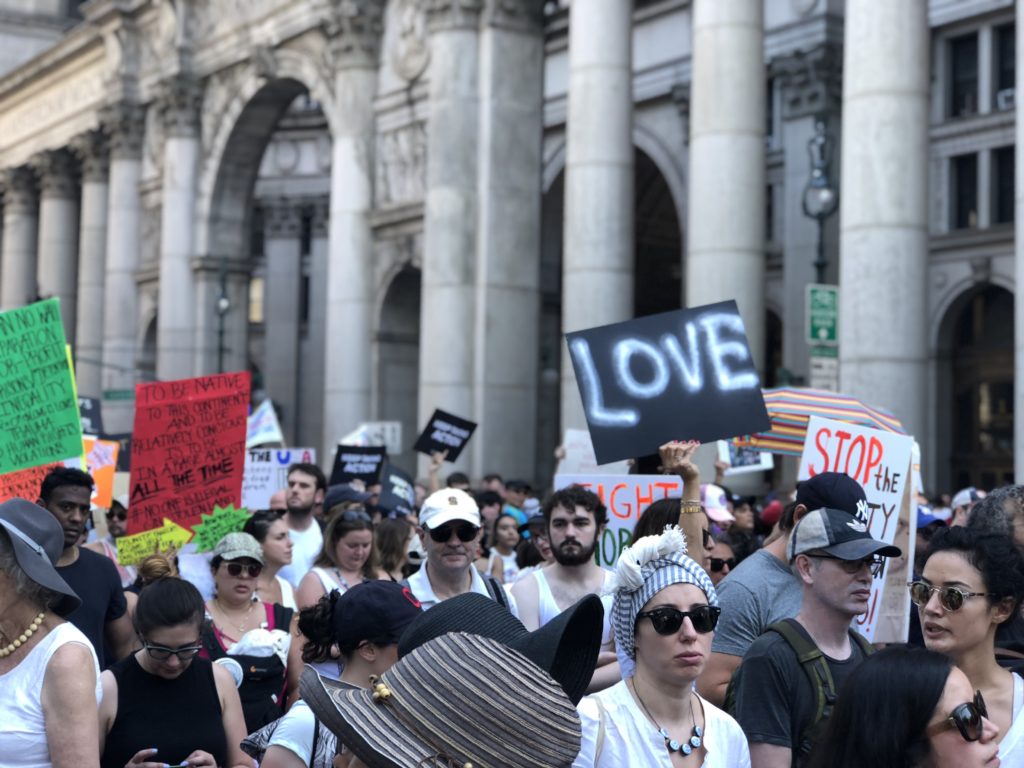 New York City was one of hundreds of cities with protests nationwide this weekend. Photo by Meg Dalton/NewsHour Weekend

Saturday’s rallies are not the first to pop up against Trump’s immigration policy, but they are the largest and most organized, with support from civil and social rights groups like the American Civil Liberties Union, MoveOn.org, and the National Domestic Workers Alliance. Joshi wants to keep the energy alive.

“Our goal is to try to keep as many as those people engaged moving forward,” she said, “to make sure that we as a society, as a community, can really communicate where our red lines are and what our moral lines are.”