BOSTON — For 35 years, Ruth D’Eredita tried to dismiss her former professor’s behavior — the way he touched her, groped her and kissed her. But last year, as dozens of women came forward to share similar encounters with powerful men, she started to see her memories differently.

“It made me look at that incident and say, no, it was wrong,” said D’Eredita, a 1984 graduate of Mount Holyoke College, a women’s school in Massachusetts. “I went there with a heart full of passion, eager for scholarship, just to throw myself into it, and this man looked at me as a potential sexual partner.”

She’s now among a wave of women inspired by the #MeToo movement to report past sexual misconduct to their colleges, breaking sometimes decades of silence in an attempt to acknowledge the wrongdoing, close old wounds and, in some cases, seek justice.

The reports from deep in the past have also raised big questions about how to investigate such cases and how to usher them through newer discipline systems built upon updated ideas about right and wrong. 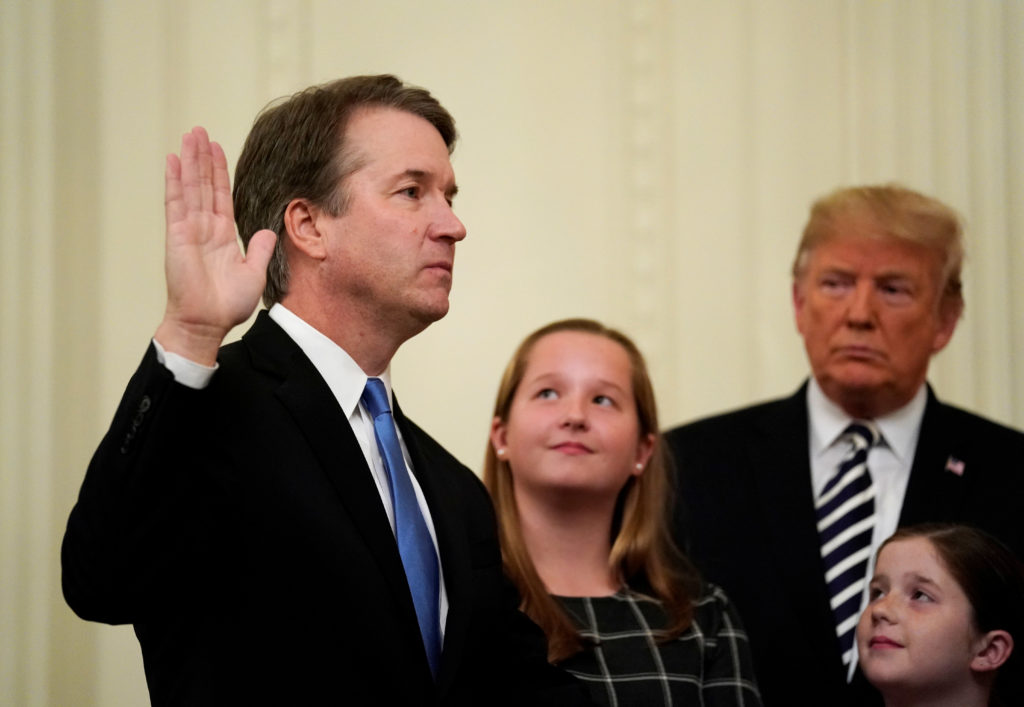 Supreme Court Associate Justice Brett Kavanaugh participates in his ceremonial public swearing-in as he is watched by daughters Liza and Margaret and U.S. President Donald Trump in the East Room of the White House in Washington, D.C. Photo by Jonathan Ernst/Reuters

In many ways, schools say, they face the same frustrations that arose in last month’s Senate hearing over Supreme Court nominee Brett Kavanaugh, who was accused of sexually assaulting another teenager in the mid-1980s. Memories fade. No one agrees. Witnesses stay quiet.

But unlike the Senate or the White House, which have broad investigative powers, colleges are left to tease out the truth with legal authority that does not extend beyond their campuses.

“We don’t have subpoena power. We don’t have the same kind of reach or authority that courts would have,” said Rob Kent, interim chief of the Title IX office at Michigan State University.

Colleges from New England to the West Coast say they’ve seen an uptick in “historical” complaints over the past year, a shift they credit to the national reckoning sparked by #MeToo. Cases that were never reported in the past are coming to light as much as 50 years later.

In the first half of 2018, for example, Michigan State University received 22 complaints from two decades ago or longer, according to public records obtained by The Associated Press. In the previous five years combined, there were just nine cases that old.

Most cases involve women who say they were harassed or assaulted by male professors, advisers or others who worked on campus.

“People feel they’ve got a voice,” said Saunie Schuster, a lawyer who advises colleges across the country and co-founded the Association of Title IX Administrators. “I think it’s a trend we’re going to see for the coming few years.”

The uptick has prompted some schools to rethink policies that placed time limits on investigations. Rutgers University dropped a two-year limit this month, saying it will now look into all sexual misconduct complaints.

At Mount Holyoke, D’Eredita’s case is among at least three that have emerged from the 1980s. In a letter to the school in October 2017, she described how a professor drove her to an art museum for an academic outing, but then began forcefully kissing and groping her in the car and later in an empty museum gallery.

The professor, who still works at the college, denied the accusation. The school hired an outside firm to investigate but ultimately concluded there was not enough evidence to prove her account.

She said she views the final decision as “wrong but understandable.”

“I know what he did to me. I know where he did it. I have been reliving it,” said D’Eredita, who now lives in Vienna, Virginia.

Mount Holyoke officials declined to comment on the case but said they are crafting a new policy on historical complaints and have hired the school’s first full-time Title IX coordinator, among other changes.

D’Eredita’s case illustrates the bind that some colleges are in: They encourage victims to come forward but struggle to verify their claims. Often it comes down to deciding which side is more credible, based on whatever scant evidence may exist.

Even deciding whether to investigate can be a challenge. Many alleged offenders have retired or taken new jobs, placing them outside the school’s reach. And while federal rules now require schools to take action if a “hostile environment” exists, they are not obligated to explore older cases that pose no threat.

As a result, some schools pass by older complaints to focus on newer ones.

Kellie Brennan, Title IX coordinator at Ohio State University, said her office takes complaints as they come in and tries to determine if they need to be addressed. “The older they are, the less likely that is,” she said.

Additionally, many schools weigh alleged misconduct against rules that were in force at the time, not those in effect now. The issue often arises in cases dealing with relationships between faculty and students, which many schools allowed until the past decade.

“What constitutes harassment might be much different now than what it was in 1980, but the reporting that we’re getting is based on standards of conduct that apply today,” said Kent, at Michigan State. If officials find the offense wouldn’t violate rules at the time, he added, “a lot of times it stops right there.”

Investigations can also carry a hefty cost. Ohio State has paid an outside firm $1.4 million for an ongoing inquiry into a former team doctor accused of sexual misconduct against scores of athletes dating back to the 1970s.

And even when schools verify misconduct, if the offender has been hired elsewhere, many opt not to notify the new employer for fear of a defamation suit. Only recently have some started drafting policies requiring such disclosure, including the University of Wisconsin.

Campus officials from across the country gathered to discuss such matters on Thursday at a conference for Title IX administrators. Michael Dunn, who helped lead a panel on the topic, encouraged officials to ask victims what they hope to gain from reporting. Some want an investigation, he said, but some just want their stories to be heard.

“We need to be really thoughtful and sensitive to what’s motivating someone to come forward now,” Dunn, who is Title IX director at St. Mary’s College of Maryland, said in an interview. “What are the steps that they’re looking for, and what are the steps the college needs to take?”

D’Eredita said she was looking for justice, but that’s not all. By coming forward, she hoped to make sure that what happened to her does not happen to young women today. And if it does, she says, she hopes they speak up.

Left: Protesters attend a 2017 "Me Too" rally in Los Angeles to denounce sexual harassment and assaults against women. Photo by Ronen Tivony/NurPhoto via Getty Images