Sunday afternoon, steps from the Ursula Border Patrol Processing Center in McAllen, Texas, activist Jess Morales Rocketto shouted to the crowd, “I want to make sure the children can hear us.”

In unison, the crowd followed Rocketto’s lead, chanting, “Niños, no estan solos” and “you are not alone.”

As families around the country celebrated Father’s Day, immigration activists in Texas on Sunday held a march and vigil to draw attention to recent separations of immigrant children from their parents at the U.S.-Mexico border.

In McAllen, organizers estimated about 200 people attended a vigil to raise awareness about the Trump administration’s recent policy to separate families, one that has gained bipartisan condemnation. 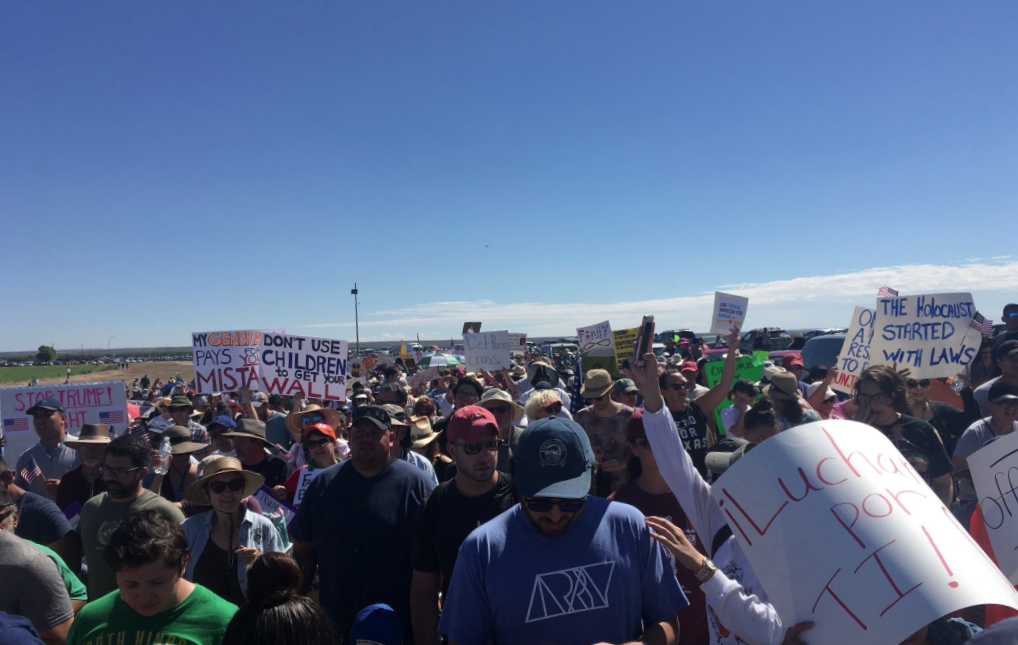 People marched in McAllen, Texas, on Sunday, June 17, to protest a Trump administration policy that separates immigrant children and families at the U.S.-Mexico border. Photo by Ai-jen Poo

The facility and others made headlines last week after CNN reported that a Honduran mother’s child had been forcibly taken away while breastfeeding, which the Department of Homeland Security denies. Other border facilities holding immigrant children have also gained attention, including one in Brownsville along the U.S.-Mexico border, where a former Walmart currently houses almost 1,500 immigrant children. 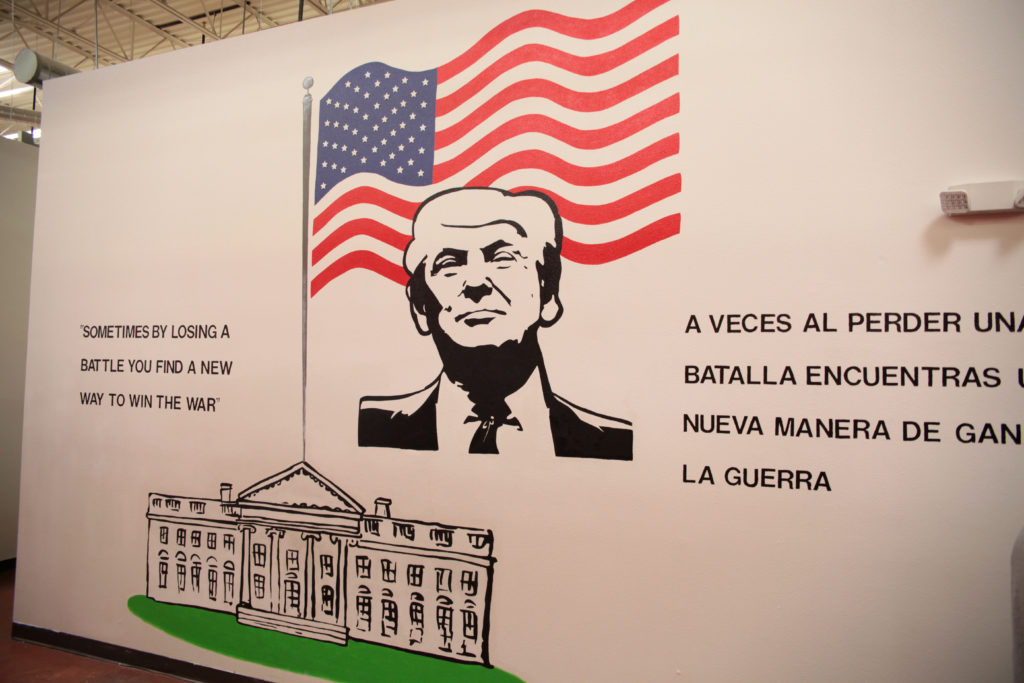 Casa Padre, an immigrant shelter for unaccompanied minors, in Brownsville, Texas, U.S., is seen in this photo provided by the U.S. Department of Health and Human Services, June 14, 2018. Photo by ACF/HHS/Handout via Reuters

The choice to call the demonstration a “vigil” was meant to “highlight the life and death implications” of family separation, said Ai-jen Poo, executive director of the National Domestic Workers Alliance, which helped organize the event and another protest outside a detention center in Elizabeth, New Jersey. 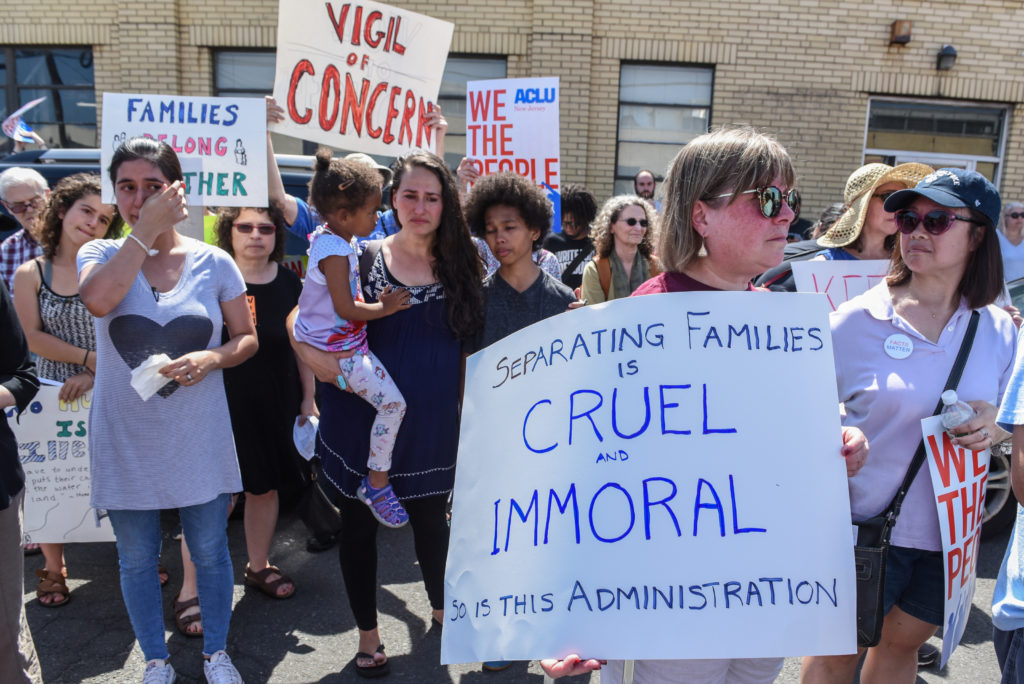 People participate in a protest against recent U.S. immigration policy of separating children from their families when they enter the United States as undocumented immigrants, in front of a Homeland Security facility in Elizabeth, New Jersey, on June 17, 2018. Photo by Stephanie Keith/Reuters

Poo referenced outrage at family separation from the medical community, whose leaders have pointed to its negative effects on children’s health. American Academy of Pediatrics President Colleen Kraft told BuzzFeed News on Friday that this separation can “cause irreparable harm to lifelong development by disrupting a child’s brain architecture.”

Poo also mentioned Marco Antonio Muñoz, a 39-year-old Honduran father who killed himself in a Texas jail last month after immigration officials separated him from his family, the Washington Post reported.

READ NEXT: How Trump’s family separation policy has become what it is today

“There are people whose lives are at stake and children’s, whose entire well-being and future is at stake. And I think we want to remember Marco Muñoz and the many many fathers who are on the front lines of this administration’s policies as well as the children,” Poo said.

The demonstration was sponsored by the Families Belong Together coalition, a group of organizations advocating for immigrant rights that includes the National Domestic Workers Alliance, the American Civil Liberties Union, People’s Action, United We Dream, America’s Voice, the Women’s Refugee Commission and Faith in Action.

“People from all walks of life and all kinds of immigration histories are moved to act in this moment.” — George Goehl, executive director of People’s Action

Children in attendance brought gifts they hoped to deliver to other children inside the facility. Former U.S. Secretary of Housing and Urban Development Julian Castro accompanied a young girl named Leah from Florida, whose father is undocumented, as they approached the facility holding stuffed animals and letters. Denied entry, Castro and the young girl left the colorful construction paper cards and toys on the ground at the door.

Hundreds of people also marched to Tornillo, Texas, where a tent encampment for immigrant children is being constructed. Estimates provided by the office of Texas state Rep. César Blanco (D-El Paso) to the Texas Tribune indicate that approximately 100 children were living there as of Friday, though the site could hold up to 360 children. Rep. Beto O’Rourke, D-Texas. who is now running for Senate, and Veronica Escobar, who is running for his seat in the House, organized the march along with the Latino Victory Project.

The march began at the Tornillo-Guadalupe Toll Plaza around 10:30 am ET as people arrived in long caravans of cars. Linking arms, marchers walked by the “tent city,” less than two miles from the U.S.-Mexico border. Massachusetts Rep. Joe Kennedy was also present.

This morning I joined the march in Tornillo to demand an end to family separation, an inhuman policy that flies in the face of our American values. pic.twitter.com/UX22G0jf2O

Activism against the Trump administration’s immigration policies has increased in recent months. Separating families at the border is not mandated by law, but ramped up under a new “zero tolerance” policy on border crossings that Attorney General Jeff Sessions announced in May. The policy mandates that all adults who cross the U.S. border outside of official ports of entry face criminal prosecution. The White House maintains that the Trump administration is enforcing current laws.

While Sessions’ announcement occurred only a month ago, a Reuters report revealed earlier this month that nearly 1,800 families were separated between October 2016 and February 2018, indicating that this enforcement procedure may have been installed earlier. Department of Homeland Security officials confirmed Friday that an additional 1,995 children were taken from 1,940 adults at the U.S.-Mexico border from April 19 to May 31.

“Families belong together” has become the identifiable rallying cry of immigration activists who call family separation cruel and inhumane.

“Families belong together” has become the identifiable rallying cry of immigration activists who call family separation cruel and inhumane.

Referencing a “constant awakening” around immigration policy in the U.S., George Goehl, the executive director of People’s Action, remarked on the the diversity of those traveling to the vigil. “People from all walks of life and all kinds of immigration histories are moved to act in this moment,” not just “recent immigrants,” he said.

Multiple organizers said their own experiences as parents influenced their involvement in the border demonstrations.

Cristóbal Alex, president of the Latino Victory Project, said his sadness at being away from his daughter on Father’s Day is a “short-lived” feeling. But, “For parents of the children that are held in detention camps like the one that we’re marching on in Tornillo, there’s really no end in sight,” he said.

Left: People hold signs in McAllen, Texas, to protest immigration detention centers and the separation of children and families at the U.S.-Mexico border on June 17, 2018. Photo by Ai-jen Poo