The Atomic Bomb
The enormous amount of nuclear energy that is released by this process produces a large amount of heat and electricity.

A nuclear weapon’s explosive power is measured in yield, which is expressed in tons of TNT. Fission, or atomic bombs, can be as small as one kiloton (KT) of explosive power or as large as several hundred kilotons. This is in contrast to the much larger thermonuclear or hydrogen bombs, which can be a thousand times bigger than atomic bombs. They are expressed in millions of tons of TNT or megatons (MT).

However, over time atomic weapons, which basically followed the Nagasaki Fat Man design, began to get smaller and lighter with greater yield, becoming more efficient. Compact atomic bombs directed to hit a city directly could still cause casualties in the hundreds of thousands, if not millions.

Thermonuclear Weapons
Thermonuclear weapons, often referred to as Hydrogen bombs or H-bombs, are nuclear weapons in which their extreme explosive powers are obtained through the process of nuclear fusion – the process of forming a heavier nucleus from two lighter ones. (Nuclei of the hydrogen isotopes tritium or deuterium are fused.) This fusion requires incredibly high temperatures. They are nearly all achieved through the initial detonation of an atomic bomb. 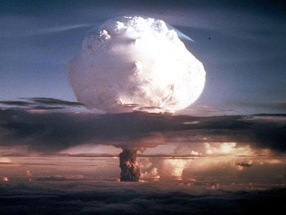 Like atomic bombs, the explosion of an H-bomb produces a blast that can destroy structures within a radius of several miles, extreme heat that can spark firestorms and intense white light that can induce blindness. Radioactive fallout, or the release into the environment of highly unstable fragments or byproducts of fission such as cesium-137 and strontium-90, can poison living creatures and contaminate air, water and soil for hundreds of years.

These weapons can be thousands of times more powerful than atomic bombs and are measured in yield equal to megatons of TNT and yet they can be made small enough to fit in a ballistic missile warhead or an artillery shell that can be carried. In 1952, the U.S. was the first nation to successfully test a 10 MT fusion bomb. Although they can be much more destructive than atomic bombs, hydrogen bombs are also much more difficult to create.

Small thermonuclear weapons are called neutron bombs. Neutron bombs, also called enhanced radiation warheads, are weapons that can be used effectively against tank and infantry formations on a traditional battlefield yet won’t impact nearby towns or cities within a few miles. They work by producing minimal blast and heat but releasing high amounts of radiation.

Dirty Bombs
Dirty bombs, also known as radiological weapons, are usually considered non-nuclear bombs that when detonated spread radioactive material. This radioactive material contaminates the area in which the bomb exploded. It can be difficult to clean up and such nuclear waste can render an area uninhabitable for decades.

However, most analysts say that the use of a dirty bomb is more psychological than physical. The conventional explosive is likely to cause more severe damage than any radiation poisoning due to the low levels of radiation present in the bomb. Although they are not considered traditional weapons of mass destruction, dirty bombs can incite mass panic and can cause severe economic consequences due to costly clean up.

“The use of a radiological weapon would result in many deaths in traffic accidents as people flee the scene, and possibly stress- and anxiety-induced heart attacks,” Andrew Karam, radiation safety officer of the University of Rochester in Rochester, NY, told Inside Science News Service.

In a particularly harsh scenario, according to Bruce Blair of the Center for Defense Information, a truck bomb with 100 pounds of one-year-old spent nuclear fuel, when detonated, would create an acute health threat in the radius of a few city blocks.

Experts say that building a dirty bomb is not difficult but obtaining the radioactive material is. The most deadly materials, including weapons-grade plutonium or uranium or freshly spent nuclear fuel, are the most difficult to obtain. Less damaging materials, such as radium or certain cesium isotopes used in medical treatments are easier to acquire.

The term dirty bomb also refers to any nuclear weapon that generates a lot of radioactive waste, such as early nuclear weapons. These inefficient weapons consumed less than 2 percent of fissile material during the initial explosion, leaving a lot of waste. Some nuclear weapons are even designed to include elements such as cobalt that deliberately create long-lasting nuclear fallout when detonated.

Dirty bombs are not improvised explosive devices that disperse non-nuclear materials such as chemical weapons, as some news organizations have mistakenly reported.

Nuclear weapons are also categorized by their destructive force and use into two groups: strategic and tactical weapons.