MINNEAPOLIS (AP) — The mayor of Minneapolis called Wednesday for criminal charges to be filed against the white police officer seen on video kneeling on the neck of a handcuffed black man during an arrest, even after the man said he couldn’t breathe and stopped moving.

Based on the video, Mayor Jacob Frey said he believes officer Derek Chauvin should be charged in Monday’s death of George Floyd. Chauvin and three other officers were fired Tuesday. The video recorded by a bystander shows Chauvin with his knee on Floyd’s neck for several minutes as Floyd is on the ground with his face against the pavement.

READ MORE: What we know about George Floyd’s death in Minneapolis police custody

“I’ve wrestled with, more than anything else over the last 36 hours, one fundamental question: Why is the man who killed George Floyd not in jail?” said Frey, who is white.

He later added: “I saw no threat. I saw nothing that would signal that this kind of force was necessary.”

But despite the officers’ swift dismissals, whether the death will be considered a criminal act or something less, like excessive force, is a more complicated question that will likely take months to investigate.

Floyd’s death prompted protests Tuesday, with thousands taking to the streets at the intersection where he died.

Many protesters marched more than 2 miles (3.2 kilometers) to the police precinct station in that part of the city, with some damaging the building’s windows and squad cars and spraying graffiti. Police in riot gear eventually confronted them with tear gas and projectiles. Tense skirmishes stretched late into the evening. 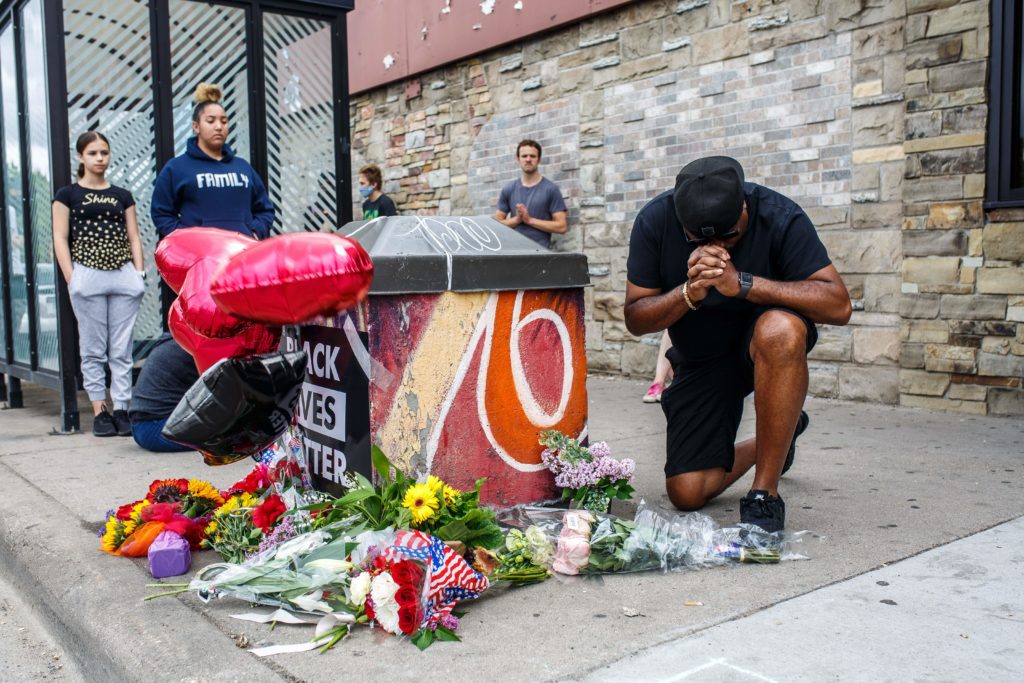 A protester prays in front of the memorial of George Floyd who died in custody in Minneapolis, Minnesota. Photo by KEREM YUCEL/AFP via Getty Images

Bridgett Floyd told NBC’s “Today” show that the officers involved in her brother’s death should be charged with murder because “that’s exactly what they did.” She said she had not watched the video, but she told ABC’s “Good Morning America” that she does not understand “how someone could possibly let an individual go out like that.”

The FBI and state law enforcement were investigating Floyd’s death, which immediately drew comparisons to the case of Eric Garner, an unarmed black man who died in 2014 in New York after he was placed in a chokehold by police and pleaded for his life, saying he could not breathe.

“I saw no threat. I saw nothing that would signal that this kind of force was necessary”- Minneapolis Mayor Jacob Frey

In the Garner case, local prosecutors, the NYPD’s internal affairs unit and the Justice Department all finished investigations into the case before the officer was ultimately fired. Garner’s family and activists spent years begging for the officer to be removed.

The officers in the Minneapolis case have not been publicly identified, though one defense attorney has confirmed he is representing Chauvin. The attorney, Tom Kelly, declined to comment further.

The police union asked the public to wait for the investigation to take its course and not to “rush to judgment and immediately condemn our officers.” Messages left with the union after the firings were not returned.

During Tuesday’s protests, some chanted and carried banners that read, “I can’t breathe” and “Jail killer KKKops.” Some stacked shopping carts to make a barricade at a Target store across the street from the station.

MORE: ‘Not the America that we want to live in,’ says St. Paul mayor of George Floyd’s death

News accounts show Chauvin was one of six officers who fired their weapons in the 2006 death of Wayne Reyes, who police said pointed a sawed-off shotgun at officers after stabbing two people. Chauvin also shot and wounded a man in 2008 during a struggle after Chauvin and his partner responded to a reported domestic assault. Police did not immediately respond to a request for Chauvin’s service record.

In Minneapolis, kneeling on a suspect’s neck is allowed under the department’s use-of-force policy for officers who have received training in how to compress a neck without applying direct pressure to the airway. It is considered a “non-deadly force option,” according to the department’s policy handbook.

Two use-of-force experts told The Associated Press that the officer clearly restrained the man too long, noting that the man was under control and no longer fighting. Andrew Scott, a former Boca Raton, Florida, police chief who now testifies as an expert witness in use-of-force cases, called Floyd’s death “a combination of not being trained properly or disregarding their training.”

“He couldn’t move. He was telling them he couldn’t breathe, and they ignored him,” Scott said. “I can’t even describe it. It was difficult to watch.” 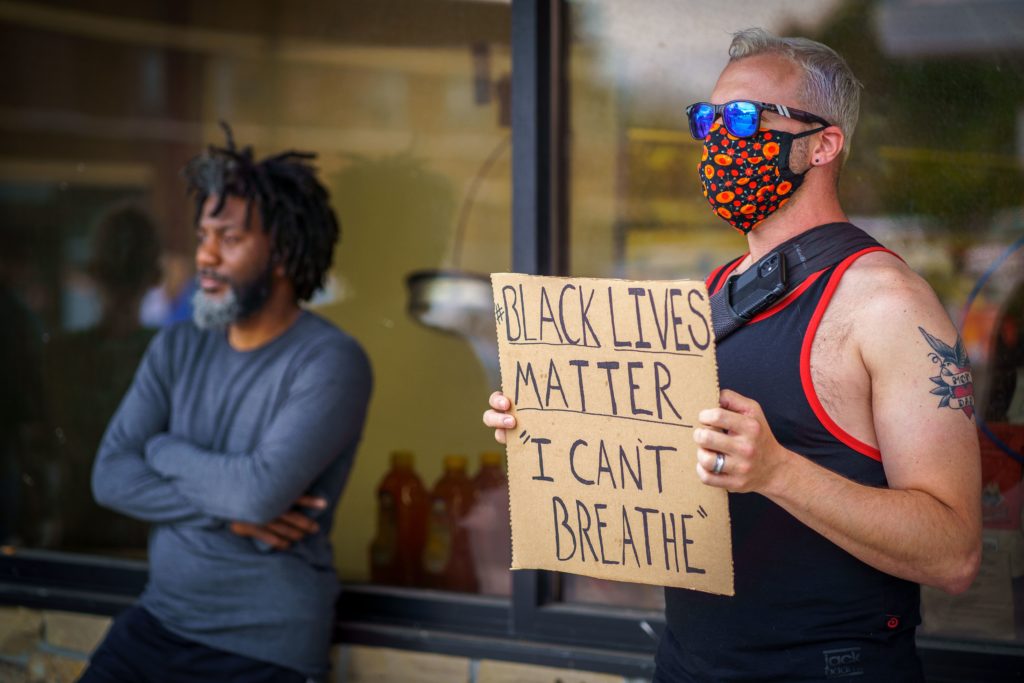 A man holds a ‘Black Lives Matter, I can’t breathe” placard while protesting near where a Minneapolis Police Department officer allegedly killed George Floyd, on May 26, 2020 in Minneapolis, Minnesota. Photo by KEREM YUCEL/AFP via Getty Images.

Police said the man matched the description of a suspect in a forgery case at a grocery store, and that he resisted arrest.

The video starts with the man on the ground, and does not show what happened in the moments prior. The unidentified officer is kneeling on his neck, ignoring his pleas. “Please, please, please, I can’t breathe. Please, man,” said Floyd, who has his face against the pavement.

Floyd also moans. One of the officers tells him to “relax.” Floyd calls for his mother and says: “My stomach hurts, my neck hurts, everything hurts … I can’t breathe.” As bystanders shout their concern, one officer says, “He’s talking, so he’s breathing.”

The man slowly becomes motionless under the officer’s restraint. The officer does not remove his knee until the man is loaded onto a gurney by paramedics.

Several witnesses had gathered on a nearby sidewalk, some recording the scene on their phones. The bystanders become increasingly agitated. One man yells repeatedly. “He’s not responsive right now!” Two witnesses, including one woman who said she was a Minneapolis firefighter, yell at the officers to check the man’s pulse. “Check his pulse right now and tell me what it is!” she said.

Floyd had worked security for five years at a restaurant called Conga Latin Bistro and rented a home from the restaurant’s owner, Jovanni Thunstrom.

He was “a good friend, person and a good tenant,” the restaurateur told the Star Tribune. “He was family. His co-workers and friends loved him.”

Left: Mayor Jacob Frey called Wednesday for criminal charges to be filed against the white police officer seen on video kneeling on the neck of a handcuffed black man during an arrest. File photo by Leila Navidi/Star Tribune via Getty Images.