JACKSON, Miss. — The young activists who launched a protest movement after George Floyd’s death are bringing fresh energy to a long-simmering debate about the Confederate battle emblem that white supremacists embedded within the Mississippi state flag more than 125 years ago.

Anti-racism protests have toppled Confederate statues and monuments across the United States in recent days, and even NASCAR banned the display of the rebel flag. But Mississippi has been a holdout for years in displaying the emblem in the upper-left corner of its banner.

Republican Gov. Tate Reeves rejects the idea of a legislative vote on erasing the symbol. If the flag is to be redesigned, “it should be the people who make that decision, not some backroom deal by a bunch of politicians in Jackson,” Reeves said this week.

The mere mention of removing the Confederate emblem from the Mississippi flag stirs anger in its defenders, who tell people to leave the state if they don’t like it.

The issue has gained new momentum since Floyd was killed last month by Minneapolis police. Thousands of people turned out June 6 in downtown Jackson for a protest organized by Black Lives Matter. One of the organizers, 18-year-old Maisie Brown, read a list of demands that started with “the removal of all Confederate symbols and memorabilia.”

A loud cheer rose from the racially diverse crowd on a street outside the Governor’s Mansion. Reeves was not home to hear it. He was out of town with his family. 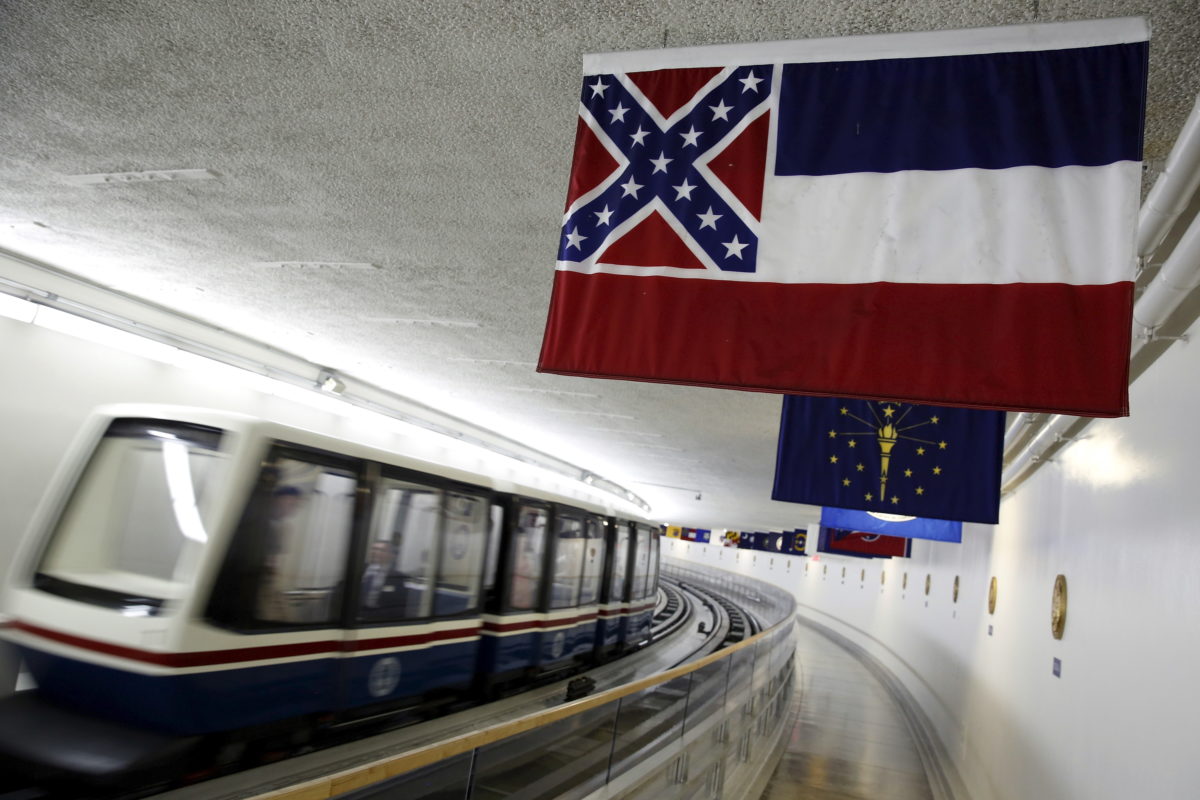 The Mississippi state flag, which incorporates the Confederate battle flag, hangs with other state flags in the subway system under the U.S. Capitol in Washington June 23, 2015. Photo by Jonathan Ernst/Reuters.

Mississippi, with a 38% black population, still has dozens of rebel soldier statues outside courthouses. It’s also the only state with a flag that includes the Confederate battle emblem — a red field with a blue X dotted by 13 white stars.

Reeves has repeatedly refused to answer reporters’ questions about whether he thinks the flag properly represents the state. The first-year governor declared April to be Confederate Heritage Month.

Mississippi has used the Confederate emblem in its flag since 1894, when white supremacists in state government adopted it after Reconstruction. Georgia put a large Confederate battle symbol on its state flag in 1956, during a backlash to the civil rights movement. That state purged the symbol from its banner in 2001 — the same year Mississippi voters chose to keep it on their flag.

During two news conferences this week, Reeves would only repeat what he said during the 2019 governor’s race — if the flag is going to be changed, it should be done by a statewide election. He said any Mississippi resident can start a new ballot initiative, which requires signatures from more than 100,000 voters.

“When the people believe it’s time to change the flag is when the flag will be changed,” Reeves said Monday.

Brown, who was born several months after the 2001 Mississippi flag election, said she has little patience for the governor’s position.

“I feel like it’s a cop-out to say ‘I’m going to let Mississippi decide’ instead of righting a wrong,” Brown said Tuesday. “For Mississippi to show that it cares about its citizens who are not white, they have to take down the flag.”

Enacting a law to change the flag would take a veto-proof two-thirds majority in a Republican-led Legislature. Some legislators said this week that they were trying to build a bipartisan coalition to reach that margin, but they acknowledge it’s tough. Several lawmakers embrace the flag, and many think their political careers would be ruined by a vote for change.

George C. Bond, leader of the Mississippi Division of Sons of Confederate Veterans, said legislators should not engage in political deals to change the flag. He said hate groups have “misused” the Confederate symbol and that Mississippi National Guard soldiers have carried the state flag into battle beginning with the Spanish-American War and continuing to the current war on terrorism.

The 2001 flag referendum included a proposal to replace the Confederate emblem with a blue rectangle topped by circles of white stars to represent Mississippi as the 20th state. Critics derided it as a “pizza flag.”

A different design has been gaining traction the past few years, with people flying it at their homes and businesses. The “Stennis flag” has red bars on either end and a white center topped with blue stars — 19 small ones encircling a large 20th one. The flag was designed by Jackson artist Laurin Stennis, granddaughter of U.S. Sen. John C. Stennis, who served 41 years before retiring in 1989.

The elder Stennis was a segregationist much of his career. His granddaughter rejects that mindset, saying she wants her design to unify the state. Critics say Mississippi should not adopt a flag with any connection to the former senator.

All eight of Mississippi’s public universities stopped flying the state flag years ago because of the Confederate symbol. Many removed it after a white supremacist shot and killed worshipers at a church in Charleston, South Carolina, in 2015.

Black and white religious leaders in Mississippi issued a statement Thursday calling the flag “a major source of disagreement and discontent.” Two dozen took part in a news conference, urging legislators to remove the Confederate symbol. They said a statewide vote would be divisive.

Ronnie Crudup Sr., administrative bishop for the Fellowship of International Churches, said that when his father and other black soldiers were together in their dress uniforms after returning to Mississippi from the Korean War, a white man used a racial slur against them and told them nothing had changed.

“By not changing the flag,” Crudup said, “we’re saying to the world: ‘Nothing has changed.'”