ST. LOUIS- Within hours of the Supreme Court’s decision to overturn the landmark Roe v. Wade decision, leaving legality of abortion to individual states, the last remaining abortion clinic in Missouri became divided ground, split between those celebrating the ruling and those protesting the loss of a right that had been protected for half a century.

The reversal of Roe and the state’s subsequent action to solidify a trigger law banning all abortions in the state drew individuals against abortion and defending abortion rights outside the Planned Parenthood clinic in St. Louis’ Central West End neighborhood, which until this week was the last place people had access to abortion in Missouri.

“Nothing in the text, history, or tradition of the United States Constitution gave un-elected federal judges authority to regulate abortion. We are happy that the U.S. Supreme Court has corrected this error and returned power to the people and the states to make these decisions,” Governor Parson said.

During a news conference Friday, clinic directors said their focus would now turn to making sure people have the information they need and working with allies to connect people with care in other states.

“We as abortion providers are working together with the [Illinois Gov. J.B.] Pritzker administration to ensure nurse practitioners, and physician assistants can practice to the full extent of their training,” Yamelsie Rodríguez, president and CEO of Reproductive Health Services of Planned Parenthood of the St. Louis Region, said Friday in a virtual press conference.

Dr. Colleen McNicholas, a chief medical officer with Planned Parenthood of the St. Louis Region, said the provider is already preparing to aid patients if they seek access across the river in states where it is legal.

“We remain laser-focused on ensuring that the surge of patients who will turn to southern Illinois for abortion access can get the dignified care that they need and deserve,” she said.

More than 14,000 patients from the Midwest and the south will seek care in nearby states like Illinois, McNicholas said, which already routinely received patients from Missouri as access dwindled in recent years. Since Texas’ abortion ban in Texas went into effect last September, sparking a series of other state-level restrictions across the country, Planned Parenthood’s Fairview Heights location in southern part of Illinois has seen a more than 100 percent increase in patients from outside both Missouri and Illinois, she added.

Brittany Nickens, standing alongside individuals who support abortion access, said it was important for her to be there in solidarity. The 26-year-old said she learned the Supreme Court overturned Roe v. Wade when her younger sister called her in tears. She did not believe what she was hearing.

“I just thought that it’s so not representative of what the general body wants. There’s just no way – and then I got on and I read it for myself,” she said.

Three-quarters of Missourians wanted abortion to remain legal, according to a February survey from Impact Research and Planned Parenthood. St. Louis Mayor Tishaura Jones said Friday the ruling was “unjust.”

“Abortion is healthcare, and it should be safe and accessible to all who need it,” she said. “Our right to make our own healthcare decisions is an inalienable one, no matter what,” she said.

The court’s decision made Nickens feel like “six people can control your entire life, can make your choices for you and you get no say,” she said. 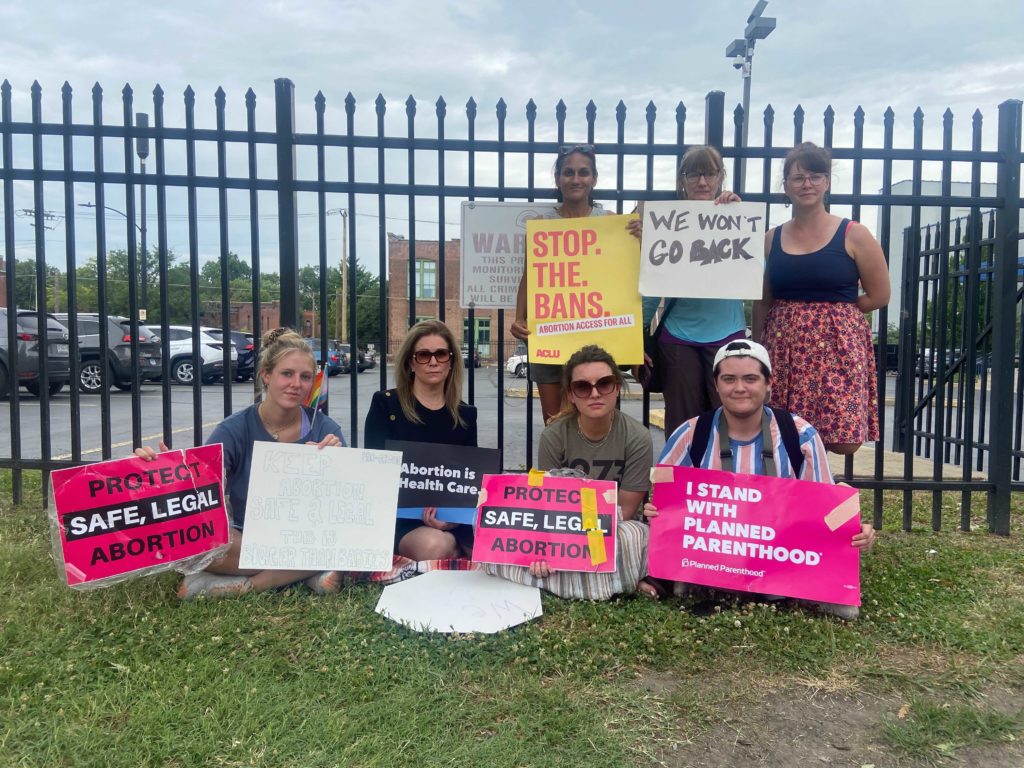 When she got off the phone with her sister, Nickens said she knew she needed to make her way to Planned Parenthood immediately. “I knew that there were going to be counter-protesters here… going to convince our city that this is what we collectively wanted and that this is representative of St Louis, and it’s not,” she said.

As she held a sign in the air reading “Protect safe, legal abortion,” she added that she was also there because she believed the fight is not over for supporters of abortion rights.

“I hope that somebody I know driving past who may have already had this procedure done or is considering it or just had a really bad night and something terrible might have happened to them, that they don’t see that and think that they’re alone and think that they have no choices left,” she said.

A few feet away, Linda Raymond and her husband, Chuck, stood wearing shirts that read “Midwest March for Life.” They joined a crowd celebrating the court’s decision.

Chuck Raymond told the NewsHour he was in the car when he heard news of the decision come out over the radio. He went home and told his wife. They decided they would join those outside of the clinic. 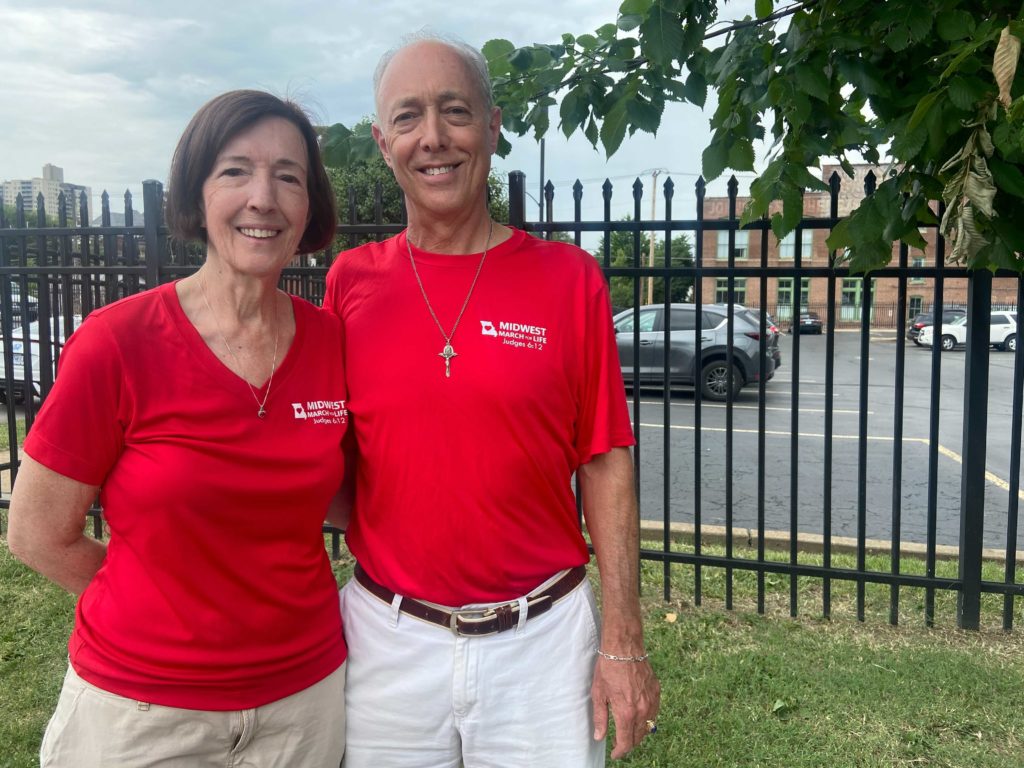 Linda and Chuck Raymond said they came out to celebrate Roe being overturned and to share their own story. Photo by Gabrielle Hays

“We are here to rejoice and celebrate the overturning of Roe v. Wade here in the state of Missouri,” Linda Raymond said. “We would not have missed the opportunity and the chance to be here today to celebrate with other pro-life warriors.”

Linda Raymond said she had an abortion when she was younger and it felt like it was an “immoral” decision and that “it only happened because it was legal.”

“I don’t want any other young women facing an unplanned pregnancy to go through with all of the abortion that I went through,” she said.

The couple said they would be looking “to continue to be getting those women that have been wounded by abortion, and the men as well.”

Jones stressed that “abortion is healthcare, and it should be safe and accessible to all who need it,” she said.

Democratic Rep. Cori Bush, who was at the Planned Parenthood location for a roundtable discussion on access to abortion when the decision came down, said in her own statement that the harm “will fall hardest on Black, brown and Indigenous people, young people, LGBTQ+ individuals, immigrants, people with disabilities and low-income communities.”

“What we’re witnessing today is coercion and control by our nation’s highest court, and I won’t sit back quietly,” she said.

Left: A crowd formed at the last location that provided abortions in Missouri hours after Roe was overturned. Many held signs saying "Abortion is healthcare." Photo by Gabrielle Hays