ST. LOUIS — Residents in parts of southwestern Iowa were forced out of their homes Sunday as a torrent of Missouri River water flowed over and through levees, putting them in a situation similar to hundreds of people in neighboring Nebraska who have been displaced by the late-winter flood.

Heavy rainfall and snowmelt have led to dangerously high water in creeks and rivers across several Midwestern states, with the Missouri River hitting record-high levels in many areas. At least two deaths were blamed on flooding, and two other men have been missing for days.

While river depths were starting to level off in parts of Nebraska on Sunday, the water is so high in many places that serious flooding is expected to remain for several days. And downstream communities in Kansas and Missouri were bracing for likely flooding.

In Iowa, the Missouri River reached 30.2 feet (9.2 meters) Sunday in Fremont County in the state’s far southwestern corner, 2 feet (0.6 meter) above the record set in 2011. People in the towns of Bartlett and Thurman were being evacuated as levees were breached and overtopped.

County Emergency Management Director Mike Crecelius said it wasn’t just the amount of the water, it was the swiftness of the current that created a danger.

HWY 34 bridge in Plattsmouth. The impacts to transportation in Eastern Nebraska will require a great deal of patience. Thankfully Nebraskans are known for this quality! pic.twitter.com/VoSb9bsbIJ

“This wasn’t a gradual rise,” Crecelius said. “It’s flowing fast and it’s open country — there’s nothing there to slow it down.”

Thurman has about 200 residents. About 50 people live in Bartlett.

In Nebraska, the Missouri River flooded Offutt Air Force Base, with about one-third of it under water on Sunday. Spokeswoman Tech. Sgt. Rachelle Blake told the Omaha World-Herald that 60 buildings, mostly on the south end of the base, have been damaged, including about 30 completely inundated with as much as 8 feet (2.4 meters) of water.

Hundreds of people remained out of their homes in Nebraska, where floodwaters reached record levels at 17 locations. The Nebraska Emergency Management Agency highlighted some remarkably high crests. The Missouri River was expected to reach 41 feet (12.5 meters) in Plattsmouth on Sunday — 4 feet (1.22 meters) above the record set in 2011. The Elkhorn River got to 24.6 feet (7.5 meters) Saturday in Waterloo, breaking the 1962 record by 5 1/2 feet (1.68 meters).

In hard-hit Sarpy County, Nebraska, up to 500 homes have been damaged, including some cabins along a lake, said Greg London of the Sarpy County Sheriff’s Office. The damage followed breaches of levees along the Platte River on Thursday and Saturday, and a Missouri River levee break on Thursday. The two rivers converge there.

London said many of the damaged homes are wet up to the roof line and likely ruined.

“This area’s had flooding before but not of this magnitude,” London said. “This is unprecedented.”

Nearly 300 people have been rescued from high water across the state. 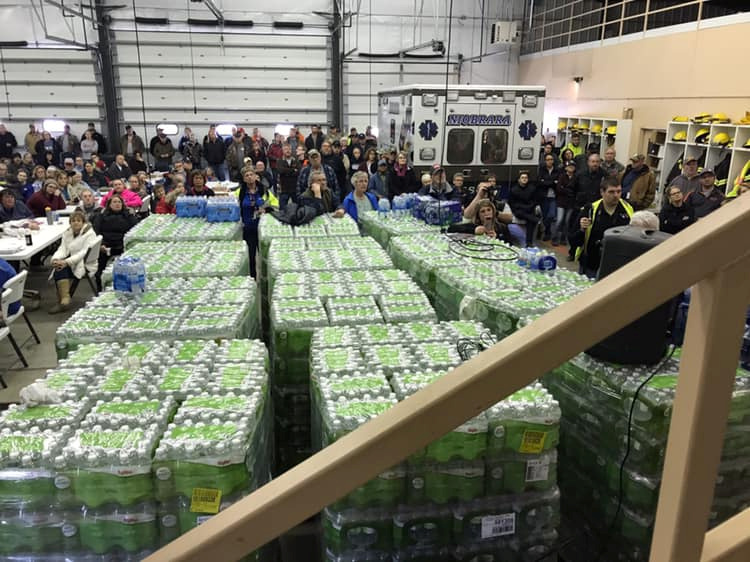 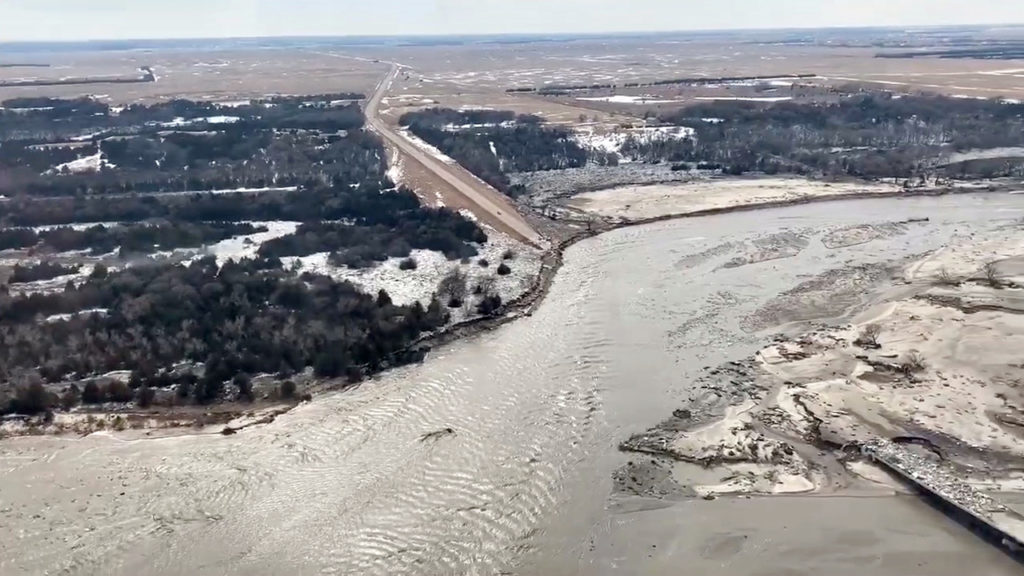 Highway 281 is seen damaged after a storm triggered historic flooding, in Niobrara, Nebraska, on March 16, 2019. Photo by Office of Governor/Pete Ricketts via Reuters

At least two people have died in the floodwaters. Aleido Rojas Galan, 52, of Norfolk, Nebraska, was swept away Friday night in southwestern Iowa, when the vehicle he was in went around a barricade. Two others in the vehicle survived — one by clinging to a tree. On Thursday, Columbus, Nebraska, farmer James Wilke, 50, died when a bridge collapsed as he used a tractor to try and reach stranded motorists.

Two men remain missing. A Norfolk man was seen on top of his flooded car late Thursday before being swept away. Water also swept away a man after a dam collapse.

Downstream in St. Joseph, Missouri, home to 76,000 people, volunteers were helping to fill sandbags to help secure a levee protecting an industrial area. Calls were out for even more volunteers in hopes of filling 150,000 sandbags by Tuesday, when the Missouri River is expected to climb to 27 feet (8.2 meters) — 10 feet (3 meters) above technical flood stage.

Flooding was causing problems for passenger train service between Kansas City, Missouri, and St. Louis. Amtrak said Sunday that its Missouri River Runner service between the state’s two largest cities was experiencing delays up to five hours because of flooding and rail congestion. All Missouri River Runner trains will be canceled Monday. The service typically travels twice daily between the two metropolitan areas.

The rising Mississippi River also was creating concern. The Mississippi was already at major flood level along the Iowa-Illinois border, closing roads and highways and swamping thousands of acres of farmland. Moderate Mississippi River flooding was expected at several Missouri cities, including St. Louis.

Flooding has also been reported in Minnesota, South Dakota and Wisconsin. In Green Bay, Wisconsin, officials said residents who evacuated their homes could return now that floodwaters have receded there.

AP reporter Jeff Baenen in Minneapolis contributed to this report.

Left: An aerial view of Spencer Dam after a storm triggered historic flooding, near Bristow, Nebraska, on March 16, 2019. Photo by Office of Governor/Pete Ricketts via Reuters

Uncovering the history of Earth’s climate