If a new Mississippi law survives a court challenge, it will be nearly impossible for most pregnant women to get an abortion there.

Or, potentially, in neighboring Louisiana. Or Alabama. Or Georgia.

The Louisiana legislature is halfway toward passing a law — like the ones enacted in Mississippi and Georgia — that will ban abortions after a fetal heartbeat is detected, about six weeks into a pregnancy and before many women know they’re pregnant. Alabama is on the cusp of approving an even more restrictive bill.

State governments are on a course to virtually eliminate abortion access in large chunks of the Deep South and Midwest. Ohio and Kentucky also have passed heartbeat laws; Missouri’s Republican-controlled legislature is considering one.

State governments are on a course to virtually eliminate abortion access in large chunks of the Deep South and Midwest.

Their hope is that a more conservative U.S. Supreme Court will approve, spelling the end of the constitutional right to abortion.

“For pro-life folks, these are huge victories,” said Sue Liebel, state director for the Susan B. Anthony List, an anti-abortion advocacy group. “And I think they’re indicative of the momentum and excitement and the hope that’s happening with changes in the Supreme Court and having such a pro-life president.”

For abortion rights supporters, meanwhile, the trend is ominous. Said Diane Derzis, owner of Mississippi’s sole abortion clinic, the Jackson Women’s Health Organization: “I think it’s certainly more dire than it ever has been. They smell blood and that’s why they’re doing this.”

Already, Mississippi mandates a 24-hour wait between an in-person consultation. That means women must make at least two trips to her clinic, often traveling long distances. 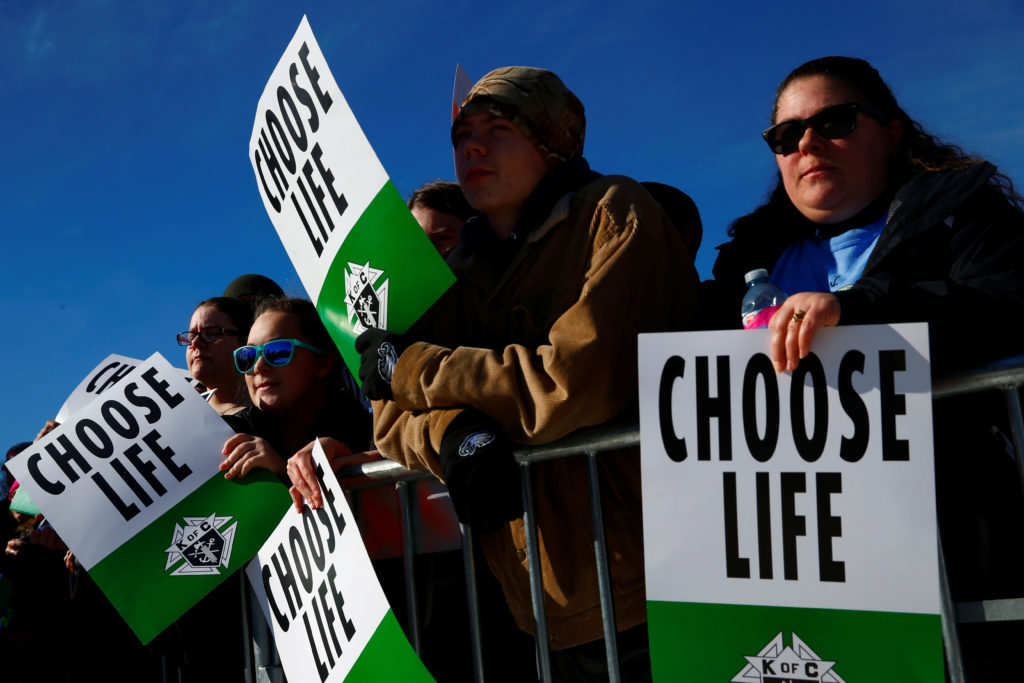 People attend the March for Life rally in Washington, on Jan. 19, 2018. File photo by REUTERS/Eric Thayer

Other states have passed similar, incremental laws restricting abortion in recent years, and aside from Mississippi, five states have just one clinic — Kentucky, Missouri, North and South Dakota, and West Virginia. But the latest efforts to bar the procedure represent the largest assault on abortion rights in decades.

Lawmakers sponsoring the bans have made it clear their goal is to spark court challenges in hopes of ultimately overturning the 1973 Roe v. Wade decision legalizing abortion.

Those challenges have begun. Derzis’ attorneys are scheduled to go before a judge on May 21, seeking to prevent Mississippi’s heartbeat law from taking effect July 1.

A judge in Kentucky blocked enforcement of that state’s heartbeat ban after the American Civil Liberties Union filed suit on behalf of the clinic in Louisville.

Similar legal action is expected before bans can take effect in Ohio and Georgia, where Republican Gov. Brian Kemp signed the latest heartbeat bill into law Tuesday. Kemp said he welcomed the fight, vowing: “We will not back down.”

Georgia’s ban doesn’t take effect until Jan. 1. But the impact was immediate.

An abortion clinic operated by The Women’s Centers in Atlanta began receiving anxious calls from patients soon after Kemp signed the law. Many callers had plans to travel from outside the state for abortions. Georgia’s heartbeat ban would have a wider impact because the state has 17 abortion clinics — more than the combined total in the other four Southern states that have passed or are considering bans.

“On a typical day we will see people from North Carolina, Tennessee, Alabama, South Carolina — all over the region,” said Dr. Lisa Haddad, the Atlanta clinic’s medical director. “And my thought is we’re not going to see those people coming here because they assume it’s already illegal in Georgia.”

Dr. Ernest Marshall, co-founder of Kentucky’s last remaining abortion clinic in Louisville, said in an email that banning abortions before most women know they’re pregnant would “have a disproportionate impact on poor women and communities of color throughout the South.”

Advocates for abortion rights expect judges to halt enforcement of any new bans while lawsuits work their way through the courts. That could take years.

“These laws are blatantly unconstitutional,” said Elisabeth Smith, chief counsel for state policy and advocacy for the Center for Reproductive Rights, which also has filed suit over Mississippi’s ban. “But if they were allowed to go into force, they would have devastating consequences for the residents of all of these states.”

If heartbeat bans are upheld, many women who are poor and have limited means to travel would have few options other than to try to terminate their own pregnancies, Haddad said, possibly using abortion drugs purchased online. 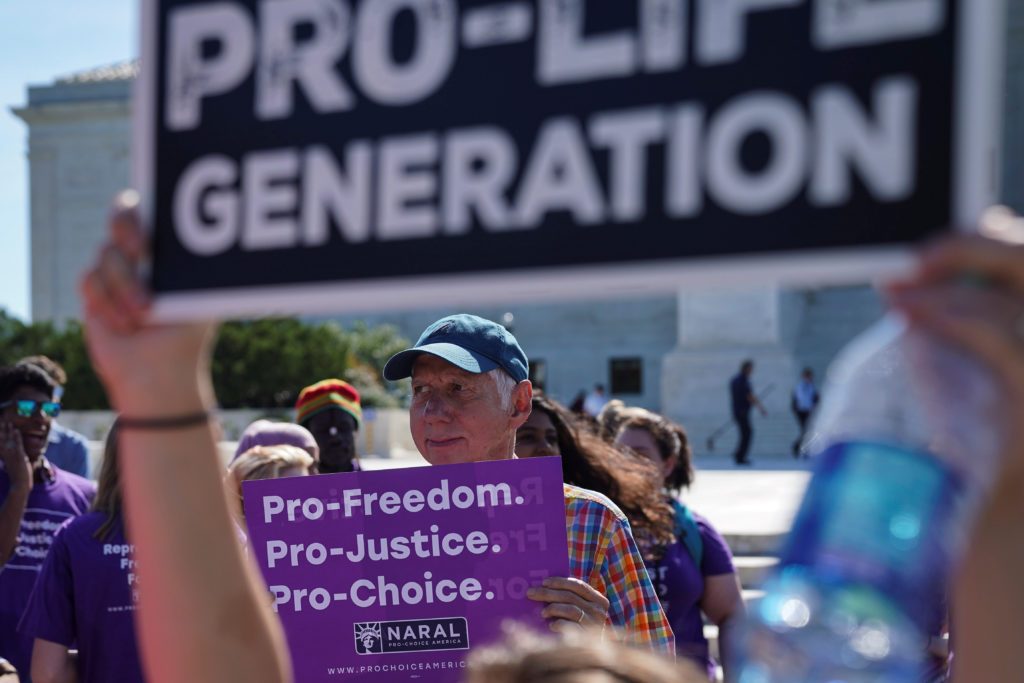 Others would have to drive or fly across multiple states, said Elizabeth Nash, a state policy analyst for the Guttmacher Institute, a research group that supports abortion rights.

“People would go to Florida, people would continue to go to Memphis,” Nash said. “How many states do you have to cross before you can access abortion services? It exacerbates all the issues we’ve already seen around taking time off from work and having the money to travel.”

Proposed heartbeat bans failed to pass this year in several Republican-led states, including Texas. There, GOP lawmakers lost ground to Democrats in the 2018 elections, and some abortion foes were wary after courts struck down prior abortion restrictions in the state. Such efforts also fell short in Florida, South Carolina, Tennessee and West Virginia.

Alabama lawmakers postponed until next week a vote on a proposal that would make performing nearly all abortions a felony. The measure has passed the state House, and the Senate suspended debate Thursday amid a heated dispute over whether exemptions for rape and incest should be stripped from the bill.

“You can’t put a price on unborn life,” Eric Johnston, president of the Alabama Pro-Life Coalition, said Wednesday, as a legislative committee heard testimony on the state’s proposed ban. “What you have to do is protect the people that live in this state and that includes unborn children.”

But Jenna King-Shepherd told Alabama lawmakers she believed the abortion she had at age 17 allowed her to finish college. She said her father, a part-time Baptist preacher furious about her pregnancy, drove her to the abortion clinic because he trusted her to make the right choice.

“I’m not asking you to support access to abortion,” King-Shepherd said. “I’m only asking you to let women, their families, their physicians and their God make this decision on how they want to start their families in private and trust them to do that.”

Left: Anti-abortion protestors holding what they said were photos of abortions stand outside the building where new organizations are working at the Republican Presidential Convention in Cleveland July 14, 2016. Photo by REUTERS/Rick Wilking