Two-thirds of Americans are willing to pay more for everyday items made out of environmentally sustainable materials instead of single-use plastic, according to a survey from PBS NewsHour and Marist Poll. 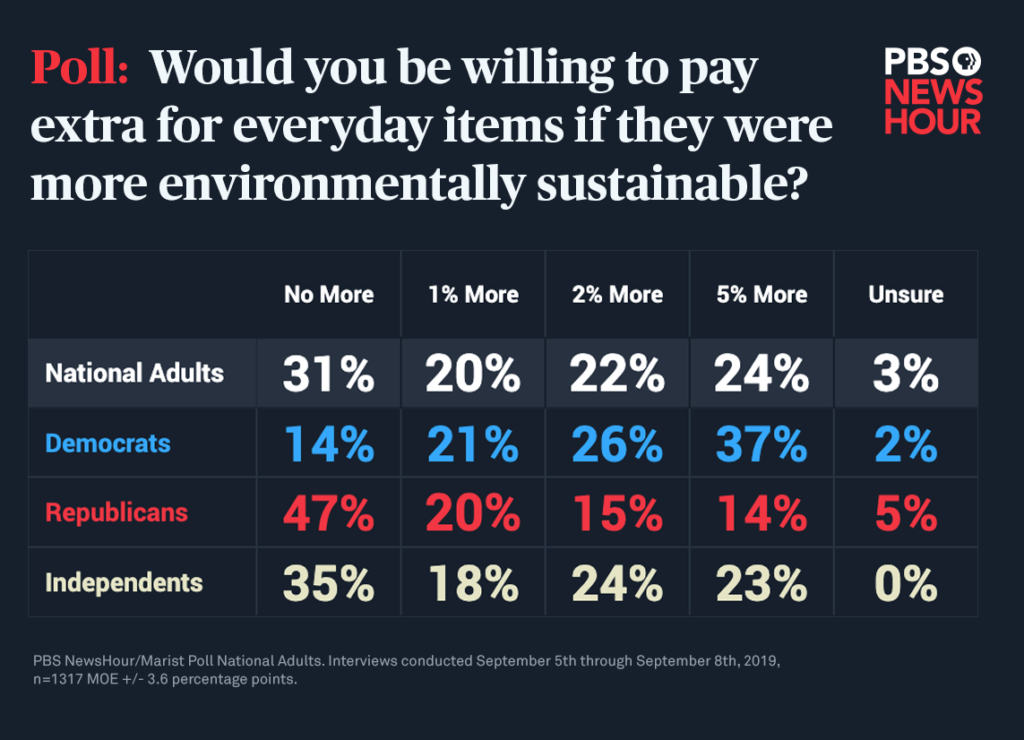 These poll results come as environmental experts project disastrous levels of plastic that are already permeating the water you drink, the food you eat and the air you breathe. By 2050, the amount of plastic waste produced worldwide is expected to quadruple, according to a 2017 analysis. “The Plastic Problem”, an hour-long PBS NewsHour special report that premieres Nov. 27 at 10 p.m. ET, examines how the plastic we use is creating problems for our entire planet.

“Those items will be with us for centuries,” said Jacqueline Savitz, chief policy officer in North America for Oceana, a nonprofit ocean conservation organization, in an email to the PBS NewsHour.

But American attitudes and willingness to stem the flow of plastics into the environment is “very positive,” said Simon Reddy who directs the Preventing Ocean Plastics project for Pew Charitable Trusts.

“The amount of ocean plastic is set to increase,” Reddy said. “Recognition and concern about plastic pollution can only increase with it, and hopefully with that, an appetite to do something about it.”

Does the U.S. support a ban on single-use plastics?

How eager are Americans to take the extra step and ban single-use plastics altogether?

More than a third of Americans — 34 percent — oppose a total ban on single-use plastics, such as non-reusable forks and drinking straws, while a quarter of U.S. adults said they support such a measure, according to a PBS NewsHour and Marist poll. That support was most strongly reported among 35 percent of Democrats. More than half of Republicans — 52 percent — said they did not want a total ban on plastics.

The cost of banning single-use plastics may temper its support. Jayce Watkins, a 21-year-old from Bountiful, Utah, said he does not support a ban because “the alternatives right now are so expensive.” Watkins studies business management at Weber State University and works in the tech industry. Right now, no alternatives have impressed him. For example, when he uses a paper straw instead of a plastic one, “by the time I get done with my drink, that straw is going to be decomposed.”

Watkins said he does support small 2-percent increase in price if that means the product is more environmentally sustainable. If everyday items, such as coffee cups, could be made and distributed widely enough to replace those made out of plastic, Watkins said he would be fine with a ban on single-use plastics.

“If you want to be responsible, you have to look long-term.”

John Abel, 44, drives a truck to deliver bread in and around Pittsburgh, Pennsylvania, and he said people need to be “more thoughtful about how we use plastic.”

It’s not too difficult or expensive to do, he said. The father of four daughters, ages 3, 5, 12 and 15, Abel said he recently took his children to a nearby zoo where they ate lunch using biodegradable plates, cutlery and cups. The meal added up to $5.25 per child, he said. When it was time to clean up, Abel noticed the trash can was empty because everything they used was compostable or recyclable.

“If you want to be responsible, you have to look long-term,” Abel said, it is “not only my future, but my kid’s future, my grandkids, and great-grandkids.”

Left: By 2050, the amount of plastic waste produced worldwide is expected to quadruple, according to a 2017 analysis. Photo by Antonio Bronic/REUTERS