Consider this problem: If you wanted to build a spacecraft to fly to the moon, what would be your first step? You’ll need an airtight lunar module, and don’t forget the high-powered rocket to cross the 239,000-mile expanse. By the way, do you know how to land the ship in a place that no person has ever visited with little gravity? I sure don’t.

In the 1960s, the national effort to answer these mind-boggling questions required 400,000 workers and nearly $300 billion. The 13-year Apollo program was an epic endeavor, driven by curiosity as well as the Cold War. All of the ingredients for these missions — the geopolitical strife, early advances in computing, the World War II invention of rockets — coalesced at just the right moment to make the moonshot possible.

NASA has now set its sights on a human return visit by 2024 — a project dubbed Artemis — but it’s unclear if the agency can meet its goal. Vice President Mike Pence, who chairs the National Space Council, declared these ambitions in March.

People are not ready to become obsolete.

Yet this spring, Congress denied NASA’s request for an additional $1.6 billion that the agency desired to start building lunar landers and to expedite plans on the rocket boosters and a space capsule.

This week when NASA Administrator Jim Bridenstine reupped his case before a Senate committee, he said that if Congress does not pass a budget in the coming days, the project could be sidelined. “We do not have the money in budget right now to develop a lander. It takes a good bit of time, which is why we need to get started right away,” Bridenstine said.

Going to the moon comes with a big price tag, a shining achievement that the United States has already checked off the list. Do Americans want to make the sacrifices needed for a new lunar voyage? For an answer, PBS NewsHour spoke to four researchers about what the nation stands to gain and lose from such an enterprise.

Many people don’t realize the space race faced huge public opposition in its early days. Polls taken throughout the 1960s revealed most Americans thought the costs for the lunar mission were too high, according to The Atlantic. Public support materialized just once during that decade: after the Apollo 11 landing in July 1969.

Those sentiments have certainly changed, according to Gallup editor-in-chief Mohamed Younis, who says that now support is the most robust they’ve ever seen. 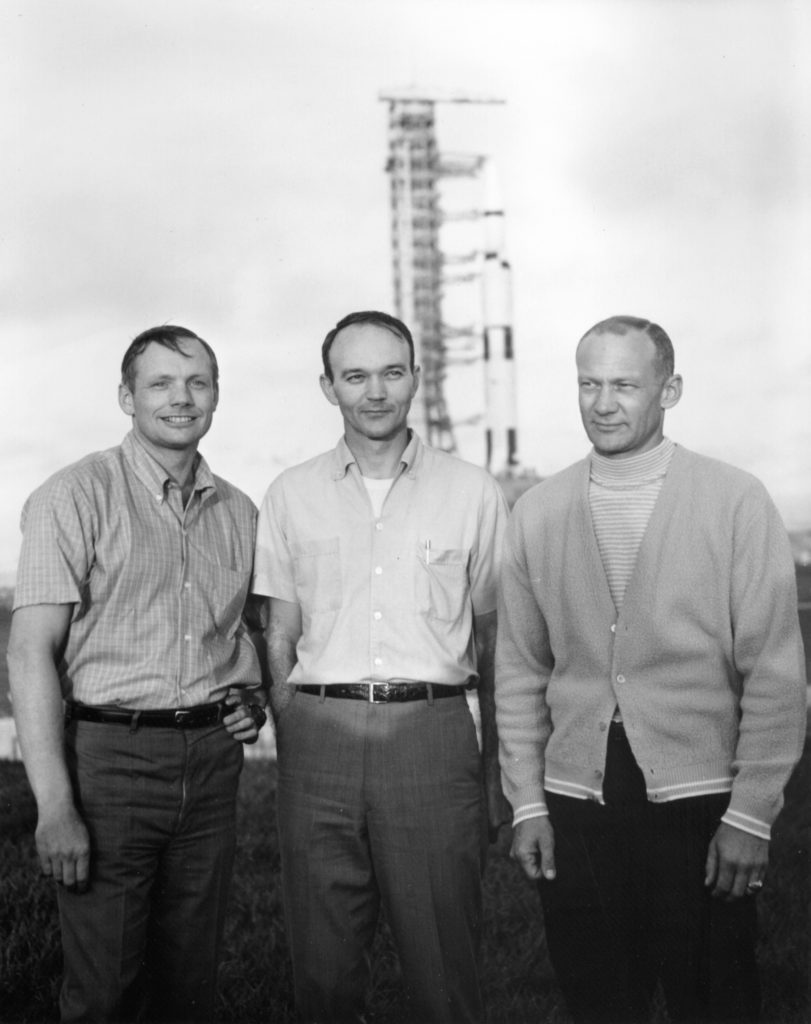 Apollo 11 astronauts Neil Armstrong (left), Mike Collins, and Buzz Aldrin pose with the Saturn V in the background on May 20, 1969. Photo by NASA

“We’re seeing the highest numbers we have amongst the American public in terms of those saying that the space program’s costs are justifiable,” Younis said, citing Gallup’s latest results from its 40-year-old poll on the topic. “Sixty-four percent of Americans today hold that view.”

Gallup’s polling also records a high rate of Americans who say NASA funding should be increased or kept at its present level.

Younis said this appreciation for space programs stems from American pride in scientific achievement. When Gallup conducted a recent poll on what makes Americans feel patriotic, they found some groups were at record lows in terms of their national pride.

But when Gallup asked about eight things that made Americans proud of their country, such as the military or economic prosperity, American scientific achievements ranked number one, with 91 percent saying that it instills pride.

Corporate investments in space missions and high-profile competition between companies like SpaceX and Blue Origins are likely driving interest to some degree, Younis said. 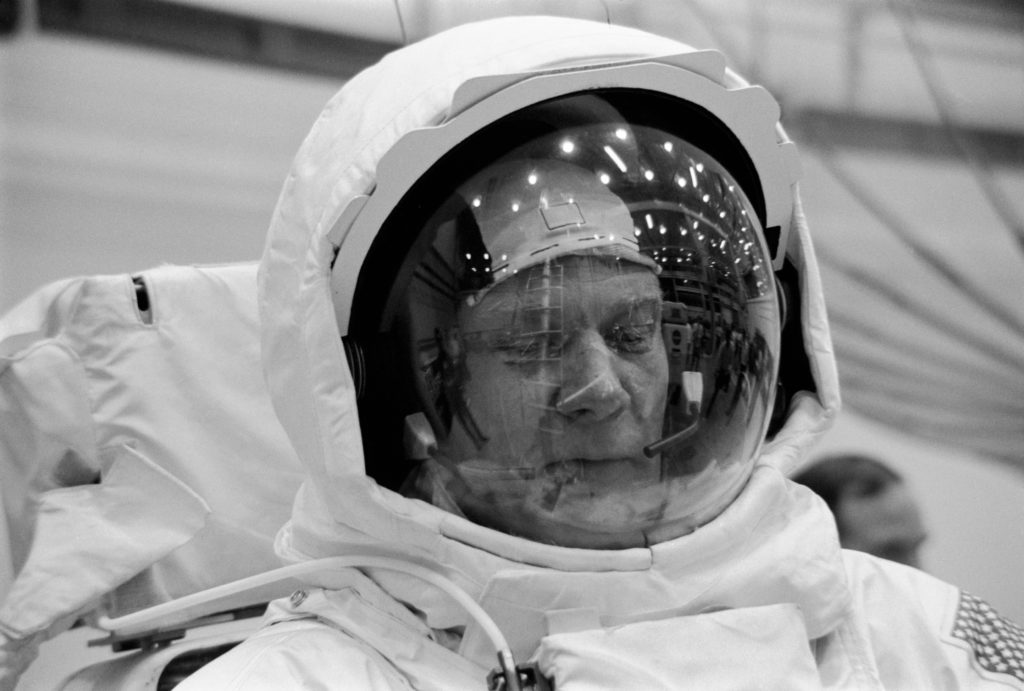 Buzz Aldrin participates in a training session at the Johnson Space Center in Houston. Photo by NASA

For the first time, a majority of Americans now support a human trip to Mars. Under many scenarios, a Mars adventure would first require more moon missions as a stepping-stone.

“We want to use this [moon mission] as a proving ground,” Bridenstine said Wednesday before the Senate.

But pride doesn’t come cheap. NASA will need an extra $5 billion per year if the first Artemis mission wants to launch by 2024, and one of its major components — the Space Launch System rocket — is already running behind schedule and over budget.

Outside of satisfying scientific curiosity, the public mostly benefits from the Apollo missions and space exploration in the realm of technology. The Apollo missions are typically cited as the reason that we have the satellites that guide us and the miniaturized phones we use to communicate with them. What could a lunar return offer you now?

Health and sustainability are two of the major categories where a human mission to the moon could make possible tech innovations. 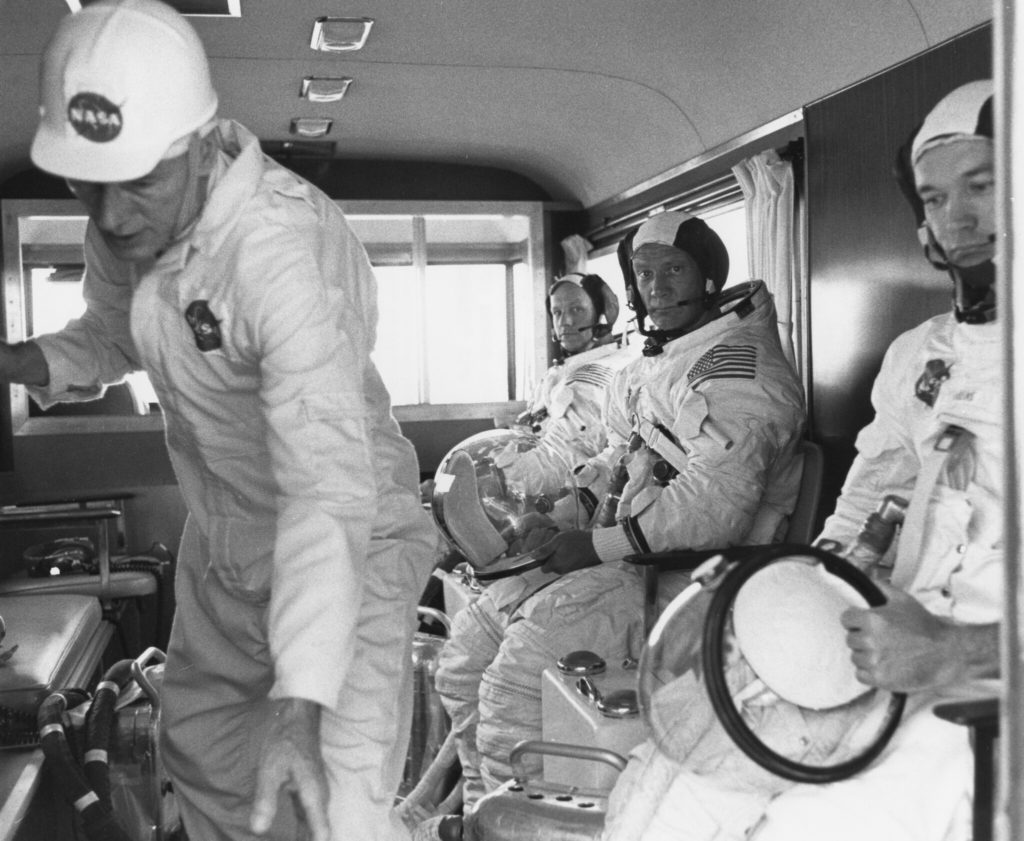 Ironically, the payoffs in health derive from the fact that long-term travel in space is hazardous for humans. This was confirmed by the first results from NASA’s twin study, in which astronaut Scott Kelly was closely monitored before, during and after spending a year on board the International Space Station. His condition was compared to his twin brother who remained on Earth.

Aside from the typical bone loss and eye swelling seen among astronauts in orbit, Kelly’s experience led to cognitive deficits and shorter telomeres, which can be associated with aging and conditions like cardiovascular disease and cancer.

Another factor in the future of space travel is how much risk we’re willing to accept. In the U.S., “we have a more risk-averse culture now than we used to,” said Ella Atkins, an aerospace engineer at the University of Michigan and senior member at IEEE. “That’s something that has made us slow down and spend more money analyzing what might happen in the worst case.”

By “worst case,” she means the chance that an astronaut could die during a crewed mission, which was also a persistent concern back in the 1960s after the Apollo 1 launchpad fire. These days, addressing those concerns equals a barrage of safety reviews, which add significant costs to the bottomline of crewed missions. 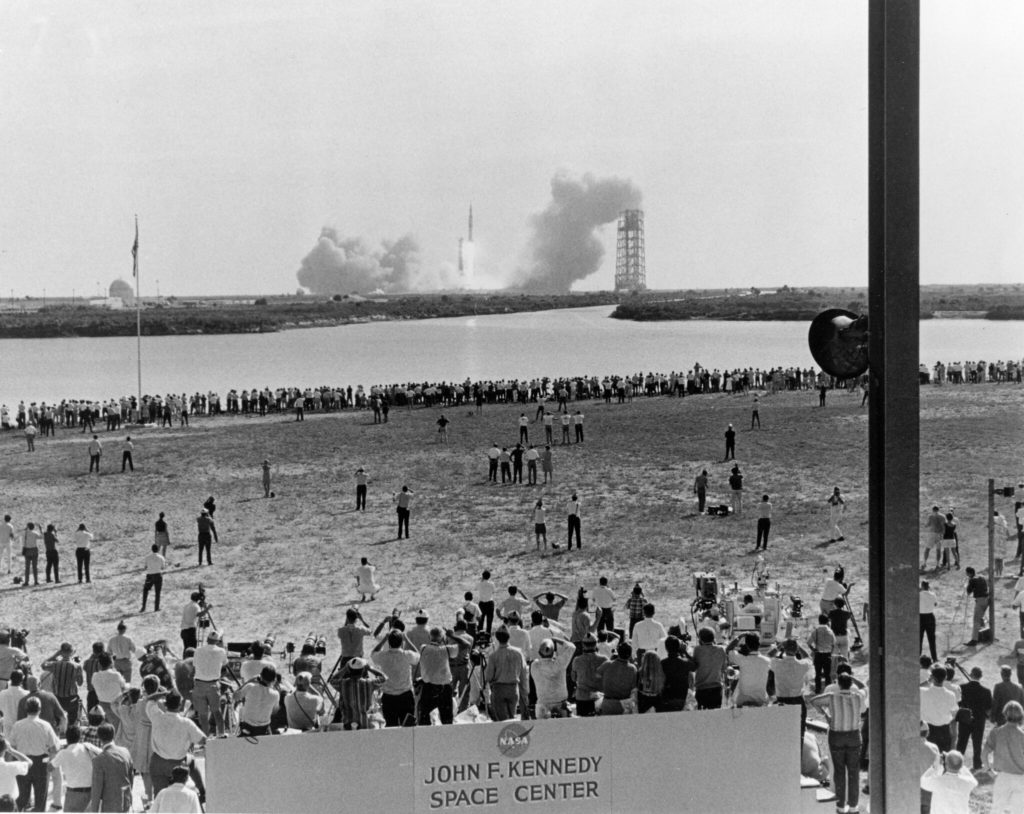 While society doesn’t seem ready to approve a one-way trip to Mars, she added, the moon offers a safer midpoint — where troubleshooting or a rescue attempt could be easier to accomplish if an astronaut’s life is in danger.

In a roundabout way, those space shields could also teach us about environmental sustainability.

Another area where we could benefit is cancer research. Radiation damage can cause cancer, said Olivier L. de Weck, an aerospace engineer at MIT. In the decades ahead, learning how to detect accelerated DNA mutations in astronauts and then finding ways to repair these injuries could be very important for those in the skies but also here on Earth.

The same goes for finding solutions for bone demineralization, which features in the development of osteoporosis, one of the most common diseases in the country.

Bone loss likely occurs in part due to radiation. The solution is to block the harmful radiation with shielding materials, which can do more than keep astronauts safe, de Weck said.

In a roundabout way, those space shields could also teach us about environmental sustainability. 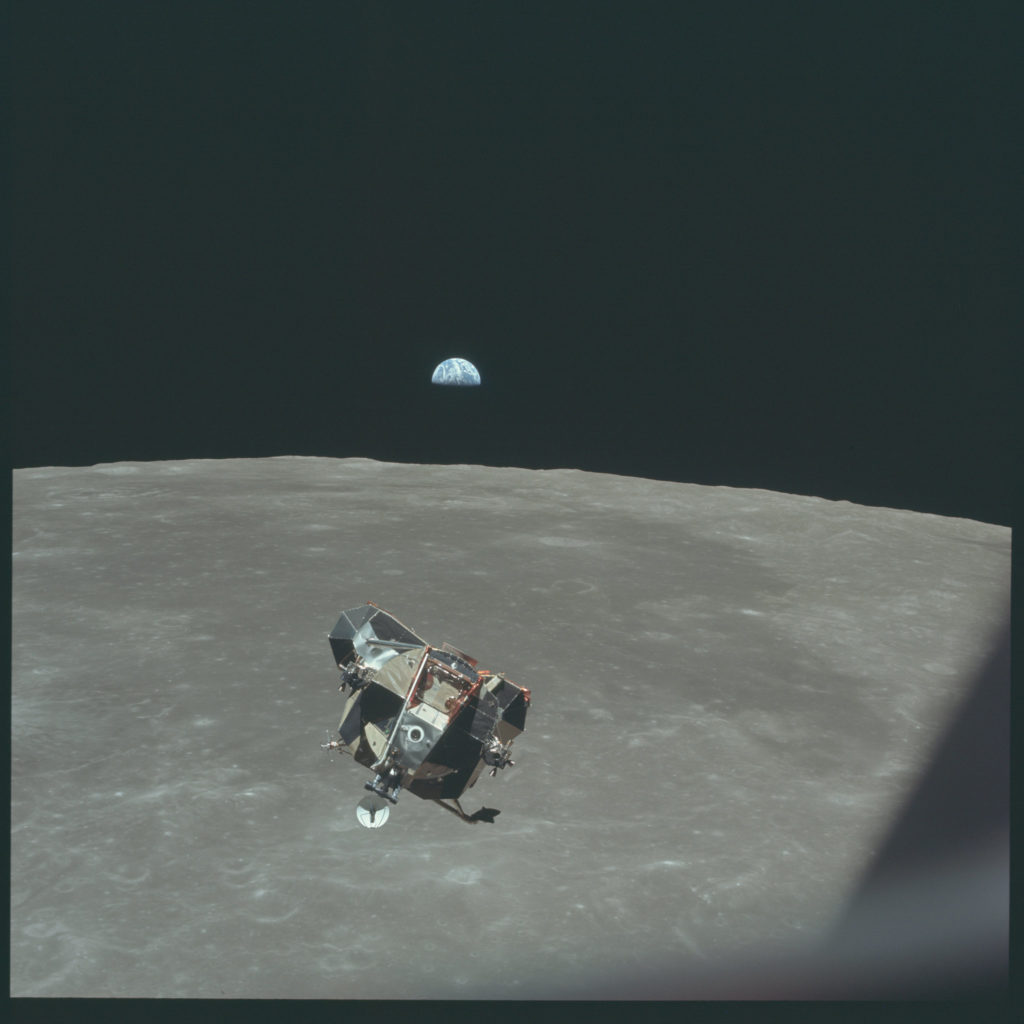 One of the leading candidates for radiation shielding is water. “To shield ourselves against both the galactic cosmic rays and charged particles, a lot of which come from the sun, we would like to have hydrogen-rich shielding materials,” de Weck said. “Water works very well for shielding or materials that contain hydrocarbon chains like plastics.”

Some estimates say these water-embedded spacecraft walls — known as passive shielding — would need to be 2- to 3-feet thick to waylay cosmic radiation. The mission could not afford to waste that water, given it would take tremendous fuel to lift it into space. But de Weck said luckily some of the biggest advances in aerospace have involved sustainability through life-support systems.

“The International Space Station is recycling a lot. They’re recycling the drinking water, the air, and even the urine. It’s like over 90 percent of the urine that’s being recycled,” de Weck said. As long as we’re trying to be more efficient on Earth to prevent climate change, people can learn how humans deal with limited resources in these closed environments.

Let’s just do it with robots?

The health and sustainability benefits from a lunar mission clearly rely on there being a human on board. But couldn’t the prospects for mining-related discoveries be handled by a robot? Countries have shipped mechanical probes all over the solar system to conduct geological studies. Last week, Japan’s human-less Hayabusa2 probe made history by landing on an asteroid, where it plans to collect and ship minerals back to Earth.

But Maria Zuber, a planetary geophysicist at MIT, said if one wants to understand geology, it’s impossible to overstate the value of human fieldwork. Rovers and landers can be nimble at collecting reams of data, but they lack intuition. For example, she mentions the immense lift that goes into getting a Mars rover to do anything.

“You say, ‘All right, I want to study that rock over there,’” Zuber said. “So a code has to be developed to send the robot…and the code has to be checked by many people… and so it could take several days to get that robot over there.”

Whereas a human could just walk over and say, “‘Nope, that’s just an uninteresting rock,’ and be done in seconds.” 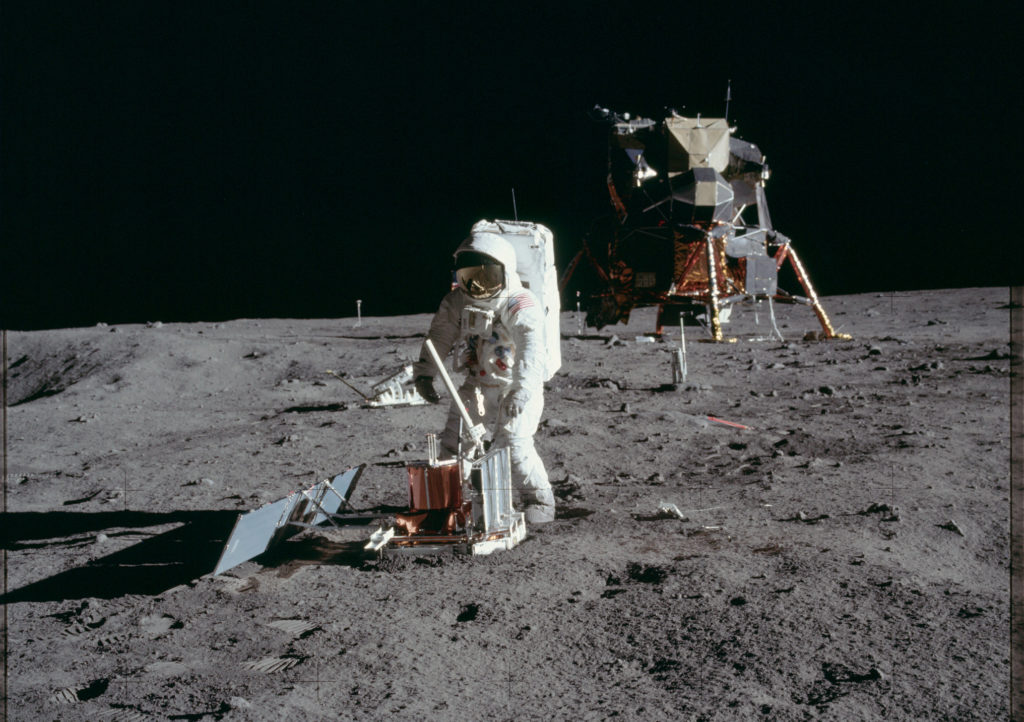 Buzz Aldrin sets up a seismology experiment during the Apollo 11 mission to detect lunar “moonquakes.” Photo by NASA

Such human intervention could become invaluable if moon missions eventually turn into moon mining. Early geological surveys, involving samples recovered by the Apollo missions, as well as a later satellite probe, revealed our moon contains the rare earth metal used in modern electronics. The surface also has fuel resources in the forms of Helium-3 and ice water.

It’s been estimated that lunar water could generate $2.4 billion of revenue annually.

The water on the moon “makes spaceflight more economical. It could be used in fuel for spacecraft,” Zuber said. In June, her team also discovered the moon’s south pole contains a huge block of metal that’s five times bigger than Hawaii.

The nuclear industry views Helium-3 as an exciting fuel source for fusion reactions, while the ice water eventually could be converted into rocket fuel.

“If we wanted to use the moon in the future as a waypoint to send spacecraft to other places, it’s essentially a cosmic fueling station,” Zuber said.

It’s been estimated that lunar water could generate $2.4 billion of revenue annually. Many argue that China expressed its ambitions toward extracting this water by landing on the far side of the moon in January, and last month Vice President Pence said the new space race has begun. 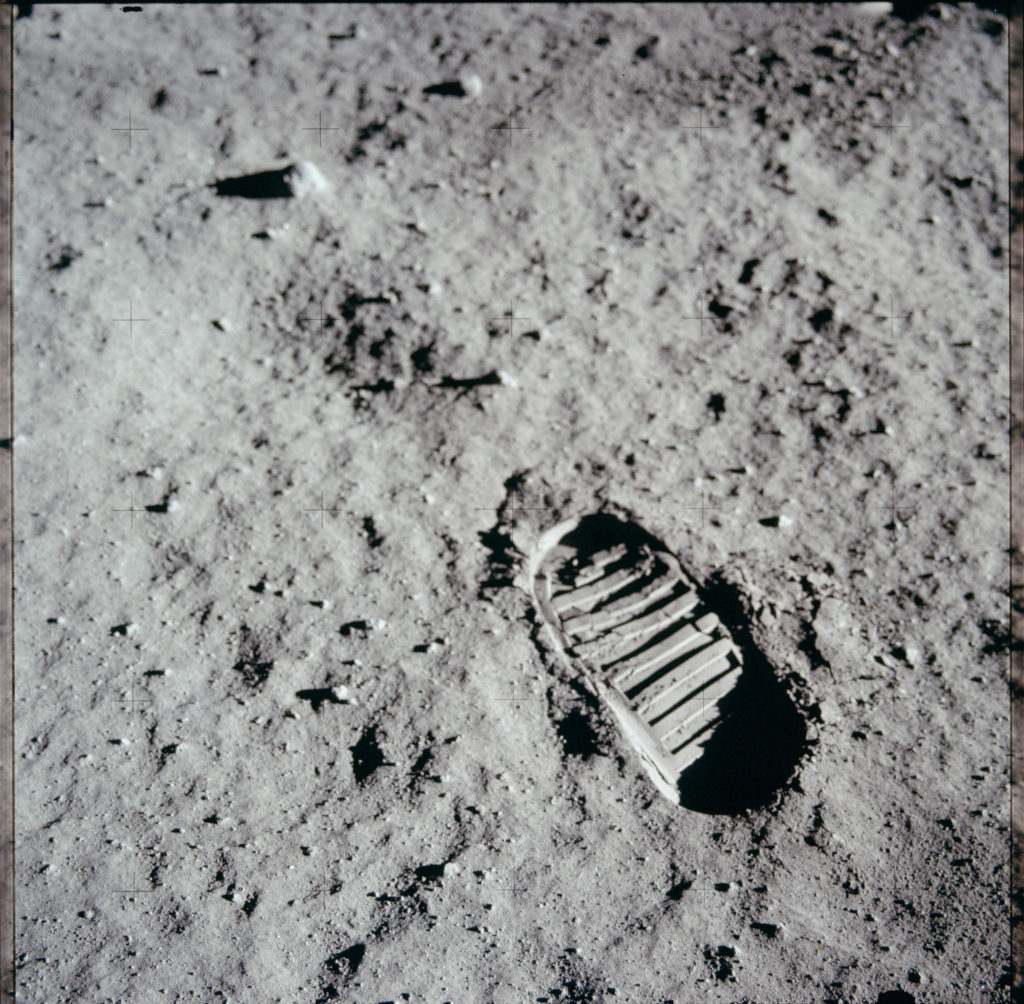 Footprint on the moon. Photo by NASA

The best bang for our buck would be to send rovers to conduct these early excavations because robotic missions cost about 100 times less than sending humans, de Weck said. But everyone interviewed for this story said there is no substitute for manned space exploration when it comes to teaching us about human survival, psychology and the limits of our ingenuity. They also added that combined robot-human missions would be the optimal scenario because it would offer more flexibility.

“To be clear, I am very hard over on the side of autonomous robots,” said Atkins, whose research relies heavily on space robotics. But she added that human missions grip the public’s attention in a way that robots cannot.

“People are not ready to become obsolete,” Atkins said.