Twenty-six people were killed in an attack at a rural church in south Texas during Sunday services, in what Gov. Greg Abbott called the deadliest shooting in the state’s history.

A young, white man wearing all black and a ballistic vest drove from a Valero gas station across the street to the First Baptist Church in Sutherland Springs, about 30 miles east of San Antonio, around 11:20 a.m. local time, according to authorities. He got out of the car with a rifle and started firing at the church as he walked inside and continued shooting, said State Department of Public Safety Regional Director Freeman Martin in a Sunday evening press conference.

Authorities found 23 people dead inside, two dead outside and one person died at the hospital. The people who died ranged from ages 5 to 72.

Twenty others are in local hospitals with varying degrees of injuries.

The Associated Press identified the shooter as Devin Kelley, though Martin would not confirm the name.

Martin said a local resident grabbed the shooter’s rifle as he was leaving the church, making the shooter drop the gun before fleeing in his vehicle. Law enforcement found him dead from a bullet wound inside his vehicle that had crashed off the roadway at the county line, though it’s unclear whether it was self-inflicted or he was shot by the resident.

Abott said during the conference, “As a state we are dealing with the largest mass shooting in our state’s history.” 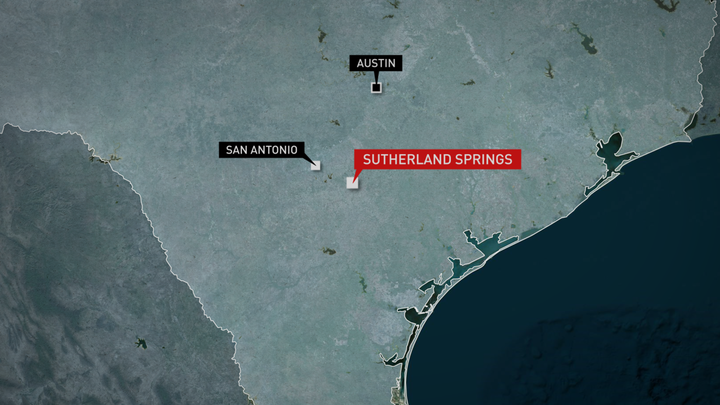 “There are so many families that lost family members,” he said. “We mourn their loss.”

The church’s Pastor Frank Pomeroy and his wife Sherri Pomeroy were out of town, but their 14-year-old daughter stayed behind and is among the dead, according to the AP.

Local and federal law enforcement, including ATF investigators and members of the FBI’s evidence collection team, swarmed the unincorporated town, which has a population of about 700 people.

Wilson County Commissioner, Ernest ‘Sick’ Hajek told the NewsHour Weekend that some of his friends were there.

“It’s very heartbreaking. This is a major tragedy for the community. This was the last little community to think something like this will happen,” Hajek said.

“This is horrific for our tiny little tight-knit town,” Alena Berlanga, who lives about 10 minutes away from Sutherland Springs in Floresville, told the AP. “Everybody’s going to be affected and everybody knows someone who’s affected.”

President Donald Trump tweeted from Japan, where he arrived this weekend at the start of a trip to Asia.

May God be w/ the people of Sutherland Springs, Texas. The FBI & law enforcement are on the scene. I am monitoring the situation from Japan.