What you need to know about Hurricane Irma

Hurricane Irma, which has killed at least 21 people and displaced thousands more on its path through the Caribbean, was downgraded to a Category 3 storm with winds of 125 mph on Saturday but could regain strength as it heads toward Florida.

It is expected to make landfall near the Florida Keys early Sunday. In a news briefing Friday, Florida Gov. Rick Scott called it “a catastrophic storm” like “our state has never seen.”

Irma is “wider than the entire state,” and is expected to cause unprecedented devastation along both coasts. It will be far more powerful than 1992’s Hurricane Andrew — which killed at least 44 people and caused $25.3 billion in damage — on its current path, Scott said. Areas “may be uninhabitable for weeks or months,” with widespread flooding, and loss of power for as many as 9 million people, Florida Power and Light said.

Certain areas of south Florida could be hit with up to 25 inches of rain and storm surges of up to 15, The National Hurricane Center said.

The hurricane is expected to hit the Florida Keys at approximately 8 a.m. ET on Sunday, then push into Ft. Myers and Tampa Bay by nightfall, according to the latest projections from the National Hurricane Center.

Irma will also hit the Southwestern part of the state harder than expected, officials said, warning of storm surge flooding up to 15 feet in portions of the state and 5 to 8 feet in Tampa Bay.

“Fifteen feet is devastating and will cover your house,” Walker said.

The National Hurricane Center issued a hurricane warning for Georgia and a hurricane watch for a portion of South Carolina south of Charleston. Both states are preparing for heavy winds and rains and a potential storm surge.

Georgia residents in six counties were under mandatory evacuation.

A path of destruction 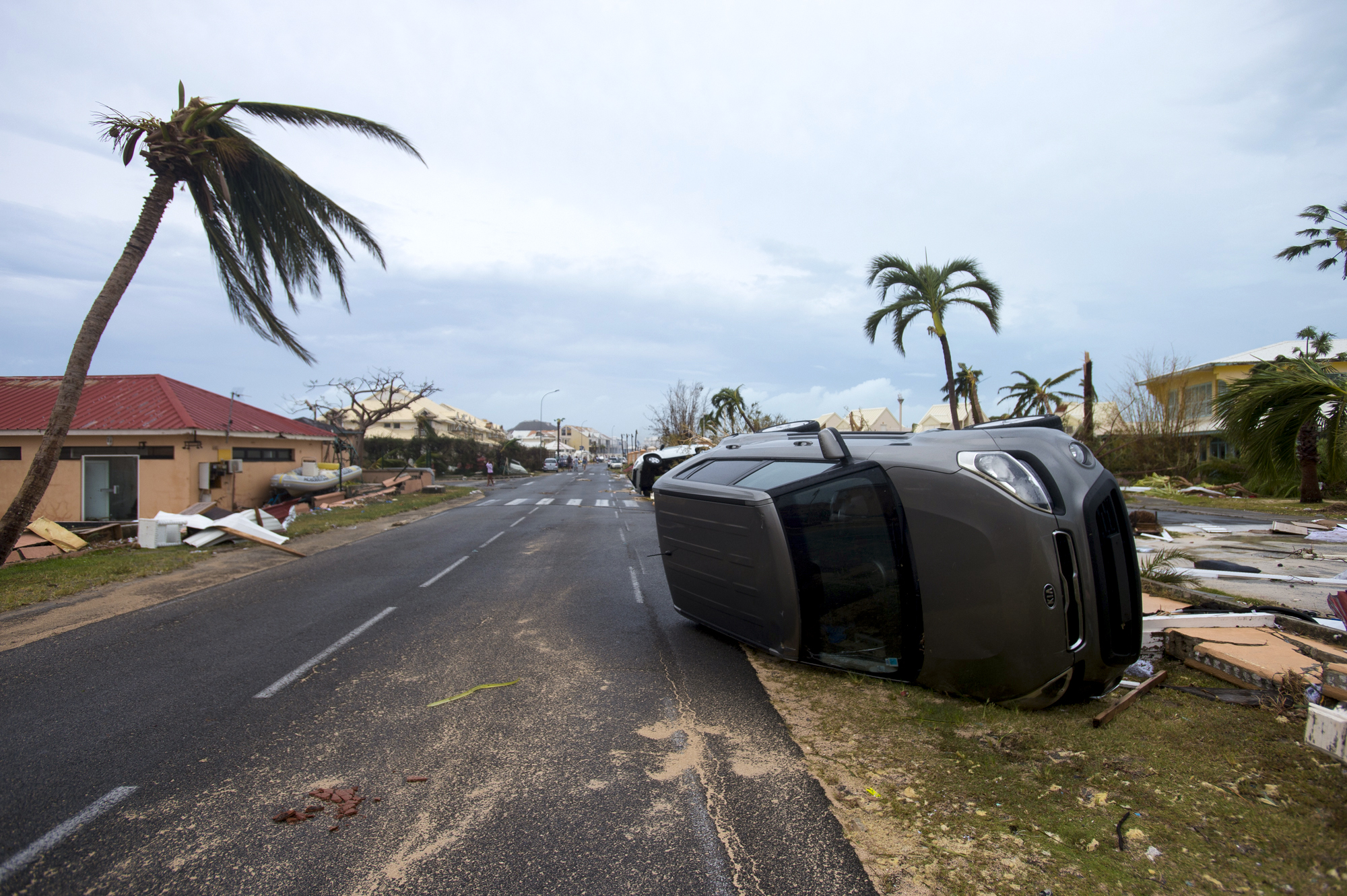 TOPSHOT – A car turned onto its side in Marigot, near the Bay of Nettle, on Saint Martin, after the passage of Hurricane Irma.PHoto by LIONEL CHAMOISEAU/AFP/Getty Images

Several Caribbean islands are recovering from Irma’s destructive path as it tore through the region on Thursday with 185 mile per hour, Category 5 winds, ripping off roofs of buildings, flattening homes and filling streets with trees and debris.

Half the island of Puerto Rico lost power, and Antigua and Barbuda Prime Minister Gaston Browne said the islands were facing an “unprecedented level of destruction,” estimating about 90 percent of the structures on Barbuda had been destroyed. Reporters said it was likely the entire island would have to be rebuilt. It could take years for the region to return to what it was.

But Irma weakened as it skirted through Cuba, where officials said sustained 125 mph winds continued to pound the north coast, damaging crops and toppling trees and utility lines. The hurricane is expected is regain strength as it crosses into the Florida Keys.

The aim is to get everyone off the island in the next few hours. It's a race against time before Jose comes through pic.twitter.com/79QFa7IK2h

Just behind Irma is Hurricane Jose, a Category 4 storm, which will likely avoid Florida but could hit some of the Caribbean Islands damaged by Irma. Hurricane Katia, in the Gulf Coast, hit Mexico north of Tecolutla on Saturday before it was downgraded to a tropical depression. The Mexican government reported two deaths related to the storm.

It’s the first time since 2008 that the Atlantic has developed three major hurricanes before Sept. 7, NewsHour’s Nsikan Akpan reported Thursday.

The National Weather Center compared Irma’s path to the one taken by Hurricane King in October 1950.

#Irma's not the first to take a path up the Florida peninsula. Hurricane King in 1950 took a similar path. More: https://t.co/zPJKSHx5Jr pic.twitter.com/v4LT9KZ4fq

How local officials are responding

Miami-Dade County began its largest-ever evacuation on Thursday, trying to evacuate 650,000 people from the storm’s path.

“We are planning for the worst. We’re hoping for the best,” Miami Beach Mayor Philip Levine told NewsHour’s Judy Woodruff on Thursday.

Mandatory evacuation orders were also underway in the Florida Keys, parts of Ft. Lauderdale and Tampa and several other counties along the coasts.

“Do not try to ride out this storm,” Florida Gov. Rick Scott said at a Thursday briefing. “We can’t save you once the storm hits.”

Scott has mobilized all 7,000 members of the Florida Army and Air National Guard to support evacuations and storm planning. Florida is also coordinating with troops from several other states.

Scott ordered the closure of all Florida public schools, as well as state colleges and universities, through Monday.

State officials also ordered the largest evacuation of prisons in state history, the Miami Herald reported, relocating than 7,000 inmates from the southern part of the state.

Several airports — including Ft. Lauderdale and Orlando — halted flights, while Miami National Airport said it would shut down once winds reached 55 miles per hour.

Major highways were gridlocked for hours on Thursday as residents tried to evacuate. Scott said the state was working with Google to show road closures in real time on Google Map. By Friday morning, gas shortages were growing across the state; 60 percent of stations in Gainesville and nearly half of stations in West Palm Beach were out of fuel, according to Gas Buddy. Scott said the state was escorting fuel tankers into the state to replenish supplies.

Notice at hardware store on Merritt Island, Florida. Out of propane, too. #hurricaneirma2017 pic.twitter.com/vN0eK1gOoD

Florida Attorney General Pam Bondi said her office was receiving an average of 100 reports of price gouging per hour, on everything from gas to hotel rooms and food at restaurants and convenience stores.

“We will prosecute people … we will go after you,” she said.

FEMA Administrator Brock Long said in a news briefing Friday that the agency was preparing up to 100,000 shelter spots for evacuees.

“I don’t know anyone in Florida who has experienced a storm like this,” Long said.

President Donald Trump declared a federal state of emergency in Florida on Wednesday, ahead of the storm, and added a similar declaration on Friday for Georgia.

In a message posted to Facebook on Friday, the president said Irma was a storm of “absolutely historic, destructive potential.”

He asked everyone in the storm’s path to heed instructions and warnings from government and local law enforcement.

“We will endure and come back stronger than ever before,” he said.