LAS VEGAS — A Nevada judge effectively put the execution of a two-time killer on hold Wednesday after a pharmaceutical company objected to the use of one of its drugs to put someone to death.

Clark County District Judge Elizabeth Gonzalez disallowed the use of the drug in a ruling that came down less than nine hours before Scott Raymond Dozier, 47, was to be executed with a three-chemical injection never before tried in the U.S.

[Federal public defenders] argued that the untried three-drug combination would be less humane than putting down a pet.

Nevada prisons spokeswoman Brooke Santina had no immediate comment. State officials could appeal right away to the Nevada Supreme Court.

New Jersey-based Alvogen had urged the judge to block the use of its sedative midazolam, saying the state illegally secured the product through “subterfuge” and intended it for unapproved purposes. The pharmaceutical company also raised fears that the drug could lead to a botched execution, citing cases that apparently went awry elsewhere around the country.

Todd Bice, an attorney with Alvogen, accused the state of deceptively obtaining the drug by having it shipped to a pharmacy in Las Vegas rather than the state prison in Ely. He said Alvogen had sent a letter to state officials in April telling them it opposes the use of its products in executions, particularly midazolam. 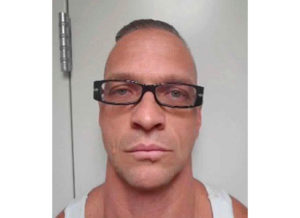 Undated photo of death row inmate Scott Raymond Dozier, whose execution in Nevada was blocked due to objections from drug company. Photo: Nevada Department of Corrections

The judge ruled that based on that letter, Alvogen had a reasonable probability of winning its lawsuit, and she issued the temporary restraining order against the use of the drug. Gonzalez set another hearing for Sept. 10.

Alvogen said in a statement that it was pleased with the ruling and will continue to work through the legal system to ensure its products are not used in executions.

A second pharmaceutical company, Sandoz, also raised objections at Wednesday’s hearing to the use of one of its drugs — the muscle-paralyzing substance cisatracurium — in Dozier’s execution. But the company did not immediately ask to formally join Alvogen’s lawsuit.

A third company, Pfizer, last year demanded Nevada return the third drug intended for use in the execution, the powerful opioid fentanyl. But the state refused. Fentanyl, which has been blamed for deadly overdoses across the country, has not been used before in an execution.

Jordan T. Smith, an assistant Nevada solicitor general, countered at Wednesday’s hearing that Nevada didn’t put up a “smokescreen” or do anything wrong in getting the drugs. He said drugs ordered by the state prison system are regularly shipped to Las Vegas.

Pharmaceutical companies have resisted the use of their drugs in executions for 10 years, citing legal and ethical concerns. But the legal challenge filed by Alvogen is only the second of its kind in the U.S., said Robert Dunham, executive director of the Death Penalty Information Center in Washington. The previous challenge, brought last year by a different company in Arkansas, ultimately failed to stop the execution.

Alvogen’s midazolam was substituted in May for Nevada’s expired stock of diazepam, commonly known as Valium. The drug is intended to render the inmate unconscious. Under Nevada’s new execution protocol, the inmate is next given fentanyl and then cisatracurium, one to slow his breathing, the other to stop it.

Bice said that Alvogen does not take a position on the death penalty itself but opposes the use of the drug in a way that is fundamentally contrary to the drug’s purpose — saving and improving patients’ lives.

In court papers, Alvogen also cited instances in Alabama, Arizona and Oklahoma in the past few years in which inmates given midazolam were left gasping or snorting, appeared to regain consciousness or took an unusually long time to die.

Jordan T. Smith, an assistant Nevada solicitor general, countered at Wednesday’s hearing that Nevada didn’t put up a “smokescreen” or do anything wrong in getting the drugs.

It was the American Civil Liberties Union of Nevada that sued and forced the state to release details about where it obtained its execution drugs.

For all the maneuvering on his behalf, Dozier, who attempted suicide in the past, has said he prefers execution to life behind bars.

“Life in prison isn’t a life,” the Army veteran and methamphetamine user and dealer told the Las Vegas Review-Journal recently. In court hearings and letters, he said there is a limit to how much artwork and exercise a person can do in prison.

Dozier was sentenced to death in 2007 for robbing, killing and dismembering 22-year-old Jeremiah Miller at a Las Vegas motel in 2002. Miller had come to Nevada to buy ingredients to make meth. His decapitated torso was found in a suitcase.

In 2005, Dozier was sentenced to 22 years in prison for shooting to death another drug-trade associate, whose body was found in 2002 in a shallow grave outside Phoenix. A witness testified Dozier used a sledgehammer to break the victim’s limbs so the corpse would fit in a plastic storage container.

Though Dozier dropped attempts to save his own life, he allowed federal public defenders to challenge the execution protocol. They argued that the untried three-drug combination would be less humane than putting down a pet.

Left: A Nevada judge effectively put the execution of a two-time killer on hold Wednesday after a pharmaceutical company objected to the use of one of its drugs to put someone to death. File Photo by Joe Raedle/Newsmakers via Getty Images