The gunman who killed five Dallas police officers this week acted alone during the rampage and used a military-style semi-automatic rifle similar to those utilized in other mass shootings, police said, as new details emerged about the life of the 25-year-old former Army reservist.

Micah Xavier Johnson shot 14 people, including 12 officers, on Thursday amid throngs of peaceful demonstrators who were protesting against the recent police shootings of black men in Minnesota and Louisiana.

Dallas police killed Johnson after a prolonged standoff by deploying a robot fitted with explosives.

In 2015, Johnson was nearly given an “other than honorable discharge” from the military while stationed in Afghanistan after a female solider reported him for sexual harassment, Bradford Glendening, the military lawyer who represented Johnson, told the Associated Press.

Glendening said Johnson was slated for removal from the army due to the incident, but wound up being honorably discharged months later for an unknown reason.

“Someone really screwed up,” he told the AP. “But to my client’s benefit.” 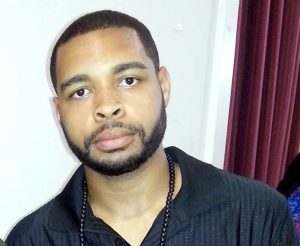 Micah Xavier Johnson, a man suspected by Dallas Police in a shooting attack and who was killed during a manhunt, is seen in an undated photo from his Facebook account. Micah X. Johnson via Facebook/via Reuters

Johnson reportedly had no direct ties to extremists but did follow at least one group via social media that promoted the use of violence, according to The New York Times . He had posted “anti-white” messages on Facebook in the days leading up to the shooting, Reuters reported.

But one relative in Johnson’s suburban neighborhood outside Dallas told public media station KERA he was a “goofy” person who loved sports and never talked about politics.

On Friday, however, the authorities said they found bomb-making materials, guns and protective gear during a search of his home.

Dallas Police Chief David Brown said Johnson told police that he was not associated with any group but did mention the fatal police shootings of black men as he holed up in a downtown Dallas garage.

“The suspect said he was upset with white people and wanted to kill white people, especially white officers,” Brown said. 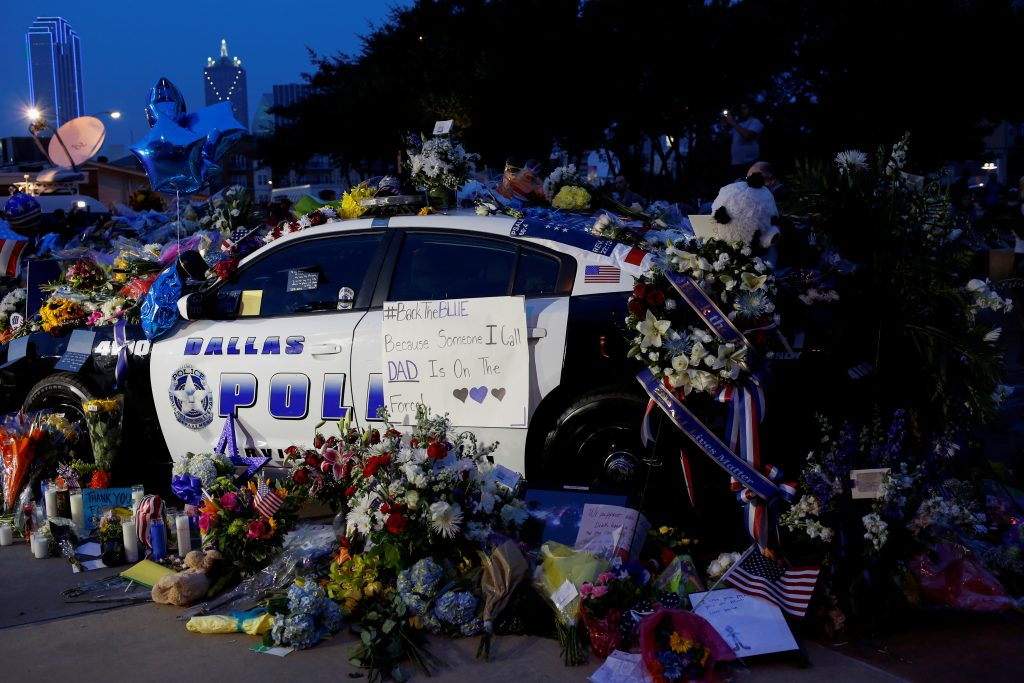 A makeshift memorial at Dallas Police Headquarters is seen one day after a lone gunman ambushed and killed five police officers at a protest decrying police shootings of black men, in Dallas, Texas, U.S., July 8, 2016. Photo By Shannon Stapleton/Reuters

On Saturday, President Barack Obama said he would convene a task force at the White House in the coming weeks with law enforcement officials and community activists about the spate of police shootings and race relations.

Speaking in Warsaw, Poland, where he was attending a NATO summit, Obama called Johnson a “demented individual.”

While the president said the country “cannot eliminate all racial tension overnight,” he said the U.S. must make it harder for troubled people to carry out acts of mass violence.

“Americans of all races and all backgrounds are rightly outraged by the inexcusable attacks on police, whether it’s in Dallas or anyplace else,” he said. “That includes protesters. It includes family members who have grave concerns about police conduct and they’ve said that this is unacceptable.”

The president said he would soon visit Dallas.

Left: Keaka Wallace, (C) who says she was a patrol partner of slain DART officer Brent Thompson, weeps as she leaves a makeshift memorial at Dallas Police Headquarters following the multiple police shooting in Dallas, Texas, on July 8, 2016. Photo by Carlo Allegri/Reuters