The U.S. Forest Service is implementing what it’s calling a 30-day action plan to address harassment, sexual misconduct, and retaliation in the agency.

The changes come weeks after a PBS NewsHour investigation into these issues, especially in the agency’s firefighting ranks, along with the departure of Forest Service Chief Tony Tooke amid allegations of his own sexual misconduct.

Interim chief Vicki Christiansen announced the plan on an all-staff call last week, and in an email to staff Wednesday. Recent news reports, she said, had “focused a bright light on a problem the agency has been combating for years” and “made it painfully clear that the policies prohibiting such behaviors are not enough.”

A transcript of the call was given to the PBS NewsHour by two Forest Service employees.

The Forest Service has a “zero tolerance” policy for harassment, but in interviews the NewsHour conducted with 34 women across 13 states, current and former employees described a workplace hostile to women. 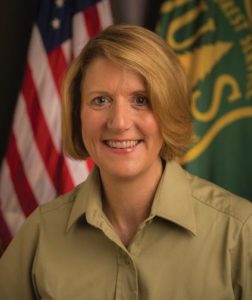 Christiansen called the problem a “cultural” one, and said it was time to “really drill down deep” to examine what needed to change.

The 30-day plan, called “Stand Up For Each Other,” includes “employee listening sessions,” staged across the country by senior leaders, counselors and civil rights officers to discuss issues of harassment and retaliation with employees. In last week’s call with staff, Forest Service Acting Associate Chief Lenise Lago said these listening sessions would help the agency develop a kind of curriculum to deal with the problem.

Lago said the Forest Service was also working with national experts and organizations, including the Rape, Assault and Incest National Network (RAINN), to develop trainings around harassment. These trainings would encourage employees to become “active bystanders” when they witness unacceptable behavior, she said.

A RAINN spokeswoman said the organization had spoken with the agency a few times but as of yet there was no formal partnership.

“If we did partner with them, there are a series of services we can provide,” including trainings, investigations and hotline services, said Kati Lake, vice president of consulting services at RAINN. “But we would want to partner with them in good faith that there would be follow through, that they’re not just responding in a moment of crisis.”

Additionally, Lago announced a change in how the agency carries out misconduct investigations, something the USDA Office of Inspector General recommended in an interim report on sexual harassment in one region of the Forest Service earlier this month.

The OIG report said more outside investigators were needed because of employee mistrust in the process. Lago said on last week’s call that the Forest Service had accepted that recommendation. The OIG will release a final report later this year.

Lago also noted that sometimes these investigations concluded without a finding of misconduct. As part of the NewsHour investigation, for example, Forest Service firefighter Michaela Myers said she reported alleged sexual harassment by her supervisor to an investigator with the United States Department of Agriculture, the Forest Service’s parent agency, and months later received a letter saying the investigation was complete and no misconduct was found. The case was closed.

On the call, Lago said there were “a lot of reasons” for no misconduct findings. “There are conflicting accounts. There are conflicting statements from witnesses. There wasn’t anybody around when it happened,” she said. “But we have said [it] before, and I’ll say it again: Every time someone makes a harassment complaint, it’s an indication that something’s wrong.”

Going forward, she said, a senior Forest Service leader would work with an employee to address an issue when there is a report of misconduct. If an employee’s senior leader is involved in the harassment, she said, the issue would be raised to the leader above that. This will help “have people involved more than just closing a case and getting a report,” she said.

Battalion Chief Abby Bolt, for example, alleged in the NewsHour investigation that she faced bullying and harassment from her male supervisors, and that it intensified after she filed a gender discrimination complaint.

Additionally, Lago announced there would be an agency-wide workplace survey to look at employee perceptions of sexual and non-sexual harassment. In January, the Forest Service released a survey of harassment in the agency, but it looked only at Region 5, or the state of California, an area whose issues were the focus of a congressional hearing in December 2016. The Forest Service has never done a national survey of the problem, as the National Park Service did after similar issues were reported in its agency in 2016.

Lago also announced the creation of a heat map tool to identify particular problem areas, an employee code of conduct called “This Is Who We Are,” and standardized harassment trainings for employees.

On the call, some employees expressed gratitude that the agency was addressing the problem. Another wondered what reassurance they’d have that action would be taken on investigations.

Retired Forest Service firefighter Jonel Wagoner, who joined the Forest Service in the 1980s and alleged decades of harassment based on her gender, said she was skeptical of the “soundbites and fed-speak” she heard on the call.

“More training, more promises to hold people accountable … None of that has helped to change the culture to date,” Wagoner wrote in an email. She and other longtime employees recounted years of harassment and retaliation in an interview with the NewsHour.

Instead, Wagoner hoped the USDA would bring back the independent Civil Rights Action Teams it had formed in the 1990s to make recommendations about how to combat discrimination. Today’s civil rights officers work directly for the Forest Service. She said outside oversight was essential.

“A handful of us have been working on getting to this incredibly important level for a really, really long time,” she wrote. There’s momentum now “to really and truly change things.”

Left: Firefighters monitor a controlled burn at Bouverie Preserve on May 30, 2017 in Glen Ellen, California. Cal Fire, U.S. Forest Service and local firefighters conducted a controlled burn as fire crews throughout the state of California prepare for what is expected to be a busy wildfire season. (Photo by Justin Sullivan/Getty Images)