A look inside the facilities where migrant families are detained

Immigration advocates have disputed that characterization, saying the detention centers where those families are held today are prison-like facilities where migrants are kept inside fenced in areas, and holding them there longer will worsen the mental and physical health problems children there already face.

“This agency has a record of not being able to keep the safety of children a priority,” Joann Bautista, a policy associate with the National Immigrant Justice Center, said after the rules were announced.

On Monday, 19 states and the District of Columbia sued to block the Trump administration’s plan to replace the 1997 Flores settlement, which offered some protections for migrant children in detention, including limits on how long they could be held and under what conditions. The new rules, which would remove the 20-day detention limit, would take effect in October unless a court takes action.

Among the concerns cited in that lawsuit are that the new rules will interfere with state licensing requirements, and attorneys will no longer be able to inspect detention centers, whose conditions have already come under increased scrutiny as a record number of families cross the country’s southwest border.

The Department of Homeland Security said in final rules released last week that it is taking steps to address some of the complaints about its facilities and would make audits public, but dismissed most other concerns as unfounded.

Experts who are already tracking those facilities say they are no place for a child, despite government efforts to make them more kid-friendly.

There are currently three facilities that can be used to detain families together.

The Berks Family Residential Center in Berks County, Pennsylvania, has 96 beds. From the outside, it looks like an apartment building and was previously used as a nursing home. It is now managed by Berks County.

The Karnes County Residential Center in Karnes County, Texas, has 830 beds. It is operated by Geo Group, a private prison operator that also runs the adjacent Karnes County Correctional Center.

The detention center, which was renovated in 2014, features a set of interconnected buildings that surround courtyards with playgrounds, basketball courts and soccer fields. Bedrooms include a shower, toilet and bunk beds. 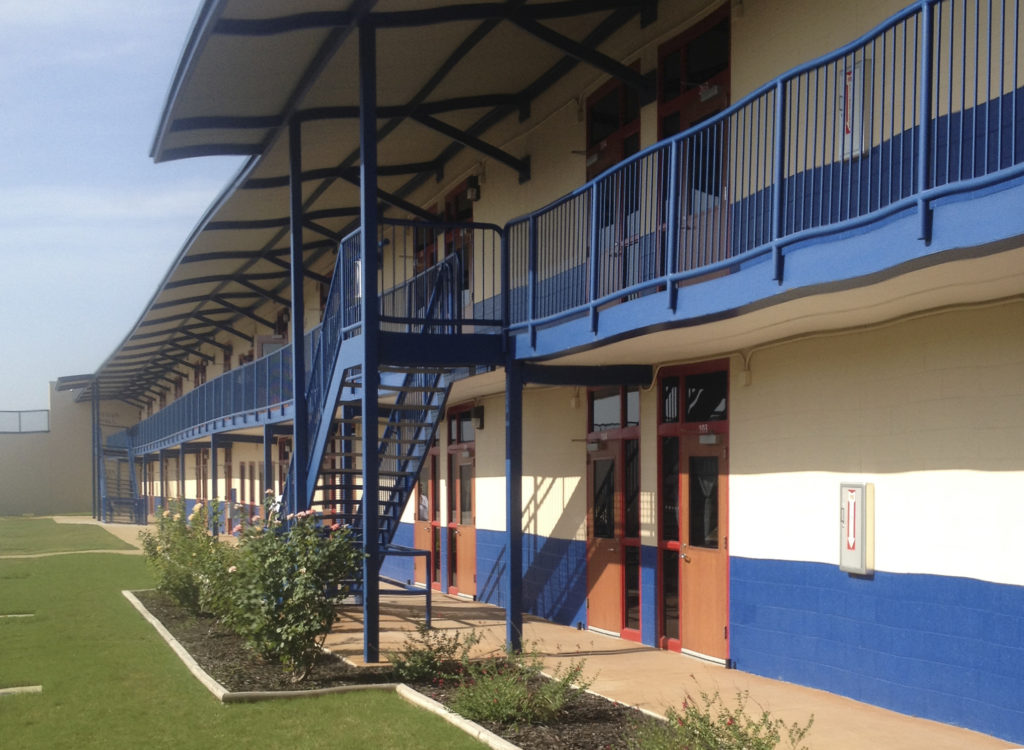 The Department of Homeland Security is currently using the Karnes facility to house mostly single women.

The South Texas Family Residential Center in Dilley, Texas is the largest facility with 2,400 beds. The sprawling area, where officials use golf carts to get around, has individual modular housing units, giving it the feeling of a refugee camp, according to people who have toured the center and spoke with the PBS NewsHour. The center includes recreation areas with soccer fields, basketball courts and handball courts, as well as a library.

The Dilley facility is managed by the private prison operate CoreCivic. 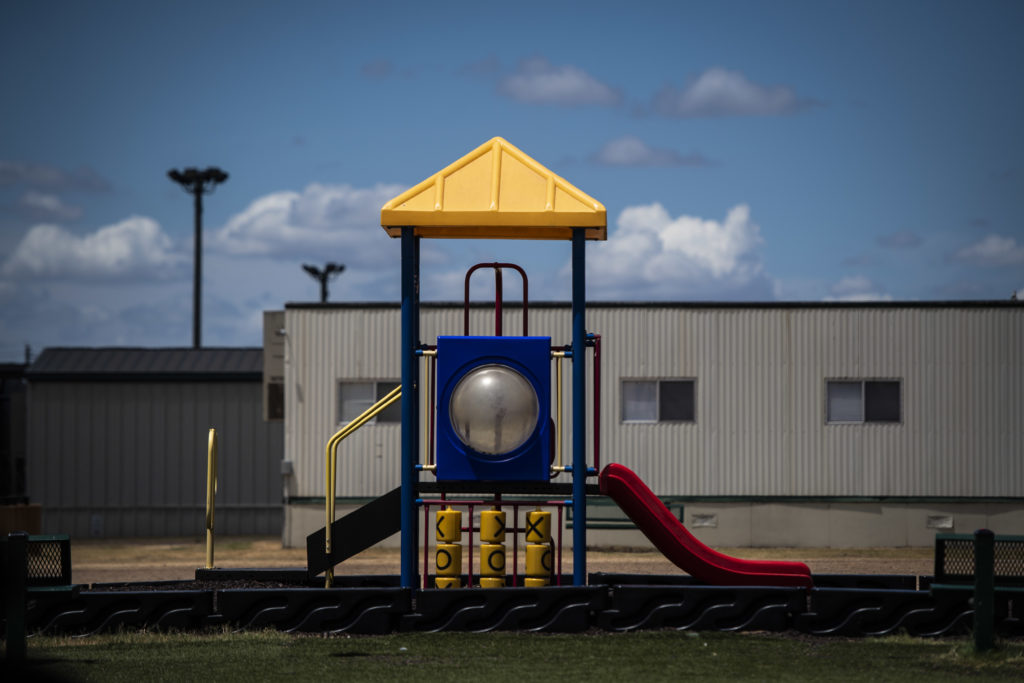 A playground is seen as U.S. Immigration and Customs Enforcement (ICE) and Enforcement and Removal Operations (ERO) hosts a media tour at the South Texas Family Residential Center, which houses families who are pending disposition of their immigration cases on Friday, Aug. 23, 2019 in Dilley, TX. (Photo by Jabin Botsford/The Washington Post via Getty Images)

In all three facilities, immigration officials say detainees are given three meals per day and have access to snacks at all hours. The facilities include classrooms where teachers hold classes each day.

Immigration officials say they hope the new standards will allow them to quickly deport people with meritless asylum claims and will deter immigrants from trying to cross the border with children, reducing the immigration backlog.

Immigration and Customs Enforcement says the average length of stay at the Dilley facility is 10 days and the average stay at the Karnes facility before it was converted into a single adult female center was 18 days, though immigration lawyers have noted that some families have been held at the detention centers for several weeks.

ICE has said it cannot yet determine whether or when new detention facilities would be created.

The South Texas center is surrounded by a fence, and Karnes is surrounded by a brick wall. Under the Flores Settlement agreement, family detention facilities are supposed to be “non-secure,” though state and federal officials interpret that term differently.

In publishing its new rules, the Department of Homeland Security called the current family detention centers non-secure. The agency said fencing, staff monitoring, and locks on doors that lead out of the facility do more to prevent “unwanted intrusions” than to keep immigrants from leaving the facility.

“These measures protect the children from strangers who are not [family residential center] residents, and from hazards such as traffic and weather in the event they accidentally become separated from a parent,” the Department of Homeland Security said in its rules. 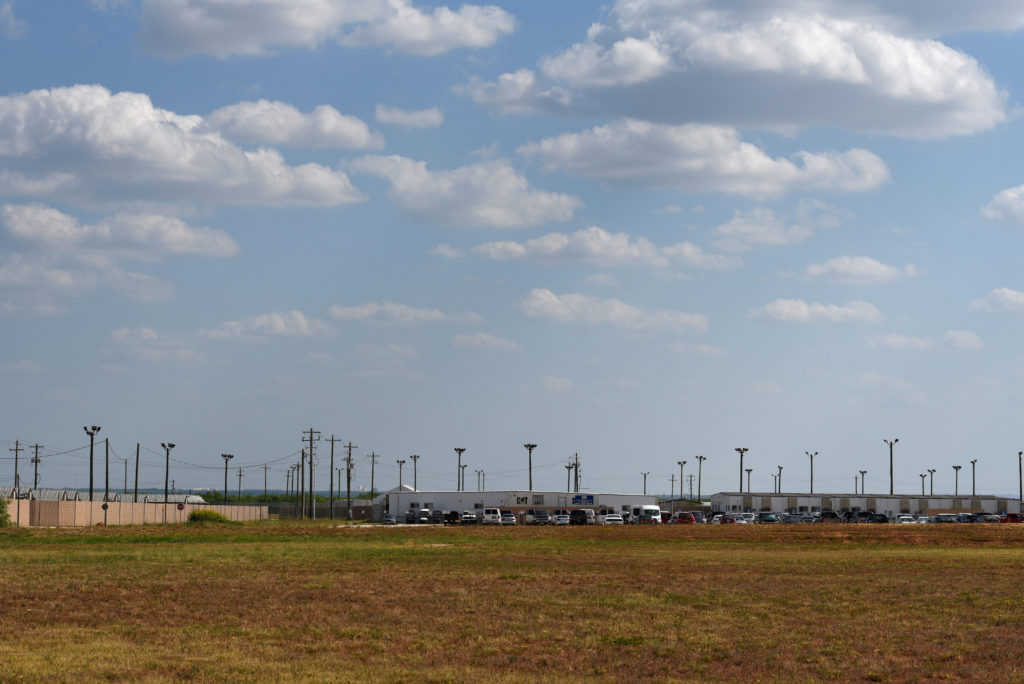 Immigrant advocates say that reasoning is disingenuous, and that children should not be kept in fenced-in areas for their own protection, no matter how nicely the facility has been designed.

“You can put all of these trappings of fun on a prison, but it is still, at its core, a prison. Children know when they can’t leave. It doesn’t matter if you put a movie on,” said Andrea Meza, director of Family Detention Services for the San Antonio-based nonprofit RAICES. 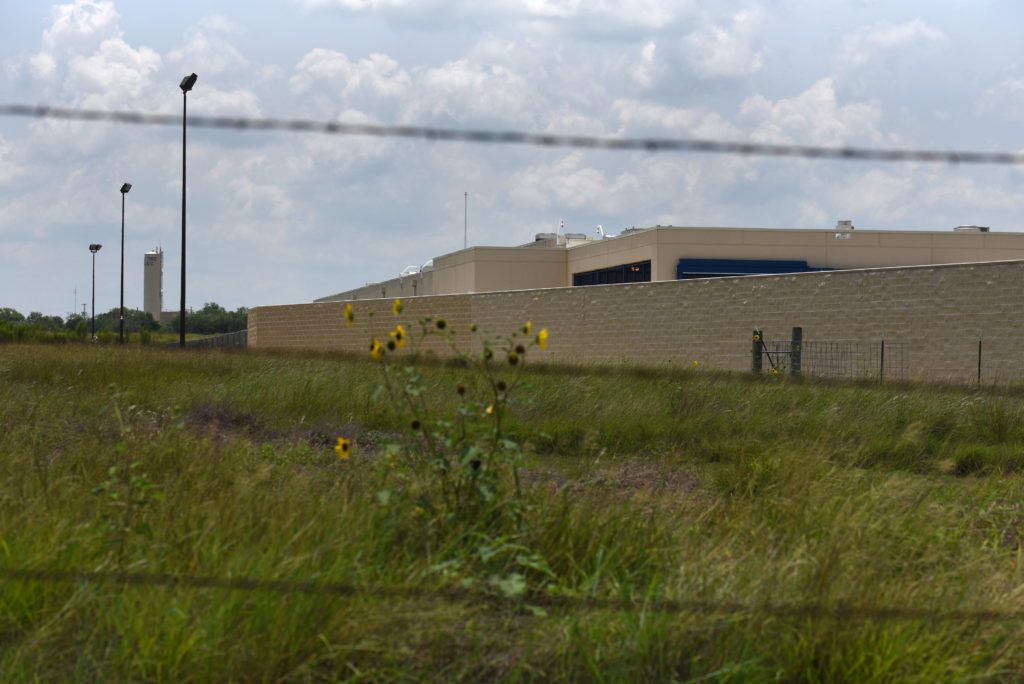 Yazmin Juárez caught the attention of lawmakers last month with her emotional testimony about the death of her daughter, Mariee, who was housed with her at the South Texas Residential Center. Juárez testified that her daughter developed signs of a respiratory illness days after they arrived.

Juárez alleges Mariee did not receive proper medical treatment and her condition worsened. A day after being released from the detention center, Mariee was admitted to an emergency room. She died six weeks later after suffering a hemorrhage that led to severe brain and organ damage.

Juárez is now suing the center operator CoreCivic for $40 million. In a statement, CoreCivic said their “hearts go out to this family for the tragic loss of their child,” and added that ICE, not CoreCivic, in charge of migrants’ medical care. 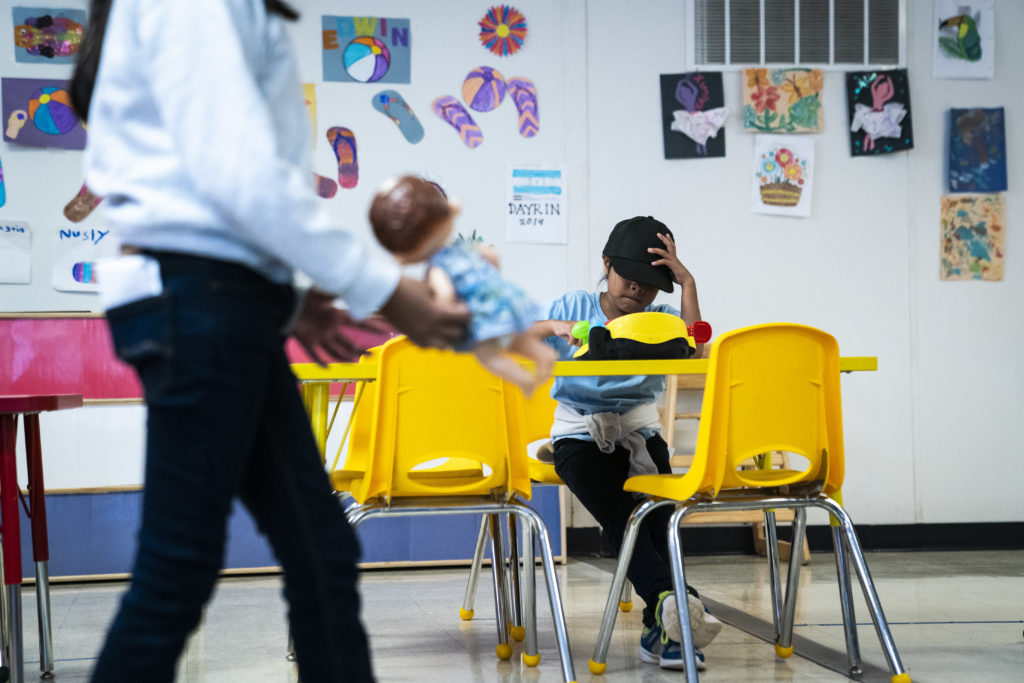 Immigrant children play with toys in a daycare as U.S. Immigration and Customs Enforcement (ICE) and Enforcement and Removal Operations (ERO) hosts a media tour at the South Texas Family Residential Center, which houses families who are pending disposition of their immigration cases on Friday, Aug. 23, 2019 in Dilley, TX. (Photo by Jabin Botsford/The Washington Post via Getty Images)

Protected by whistleblower status, the medical experts have detailed cases in which children experienced serious weight loss and seizures, or children’s fingers were broken by the large metal prison-like doors at Karnes.

“It’s crazy to think you will take a men’s medium security prison and make it safe for children,” Allen told the NewsHour.

Children were also placed in isolation in the medical unit as a form of punishment, which Allen said goes against medical ethics.

While both Allen and McPherson said they believe people working in the facilities want to help migrants, the fact that Karnes and South Texas are also run by companies who operate prisons mean the facilities are inappropriately using methodologies that are similar to those used in prisons.

Children are isolated from their community while in detention and are often separated from other family members because the detention centers only house women and children. That isolation can have serious mental health consequences. Both adult and child migrants have reported having suicidal thoughts.

The problems Allen and McPherson have documented span both the Obama and Trump administrations. Toward the end of President Barack Obama’s term, Homeland Security Secretary Jeh Johnson said family detention was an “inefficient use of our resources and should be discontinued.” But the Trump administration has signaled it wants to hold families in detention for longer periods of time.

In a statement to the NewsHour, ICE said it takes “very seriously the health, safety and welfare of those in our care.” It said it provides comprehensive medical care to everyone in ICE custody that is administered through a staff of registered nurses, licensed mental health providers and physicians, and spends more than $269 million each year on health care services.

In its final rules, the Department of Homeland Security said can successfully monitor its operations by hiring third parties to audit detention centers.

Immigration advocates say that would still create a conflict of interest and point to the numerous instances where children have been reportedly ill-cared for in detention centers over the years. The American Medical Association, American Psychiatric Association, American Academy of Pediatrics and American College of Physicians have all spoken out against the detention of immigrant families in any circumstances.

“One of the reasons the medical profession is so unified [against family detention] is no one has ever done it safely,” Allen said.

Left: An immigrant child plays in front of patriotic phrases and symbols covering the walls in a gymnasium as U.S. Immigration and Customs Enforcement (ICE) and Enforcement and Removal Operations (ERO) hosts a media tour at the South Texas Family Residential Center, which houses families who are pending disposition of their immigration cases on Friday, Aug. 23, 2019 in Dilley, TX. (Photo by Jabin Botsford/The Washington Post via Getty Images)