The Trump administration is proposing to overhaul a long-standing court agreement that outlines the standards for detaining child migrants in an effort to reduce illegal immigration.

Under new rules laid out Wednesday, immigration officials will officially begin holding children longer than the 20 days required by the Flores Settlement Agreement. The children and their parents will be held in immigration facilities designed for families, officials said.

The Flores agreement allows for an administration or Congress to make permanent rules that would supersede the terms. But if an administration acts without Congress, a legal challenge would require the rule be approved in court.

What is the Flores agreement?

The Flores Settlement Agreement was reached in 1997 when, in response to a lawsuit, courts ruled migrant children could not be held by the U.S. government indefinitely. A settlement between the U.S. and the plaintiffs in the case outlined standards for the treatment of migrant children who were being detained.

According to the agreement, children must be held in the least restrictive setting possible and in “safe and sanitary” facilities with access to toilets, sinks, drinking water, adequate food, medical assistance, adult supervision and “contact with family members who were arrested with the minor.”

Flores was never intended as being a permanent protection of these children’s rights.

Then, in 2015, a California federal judge further specified that “expeditiously” means a minor can be held for no more than 20 days.

But “Flores was never intended as being a permanent protection of these children’s rights,” said Warren Binford, a Willamette University law professor who has witnessed firsthand the conditions in immigration facilities. “It was an agreement that said the government was going to establish permanent protections for children’s rights.” And so far, Congress has not stepped in to make it law.

Last year, the Trump administration stopped a long-term policy of releasing immigrants while they awaited their immigration hearings, and began imposing a “zero tolerance” policy against adults who crossed the border illegally. Under the new guidance, thousands of children, including infants, were separated from their parents and other caregivers who were being detained elsewhere.

By separating children from their parents, the Trump administration could release children before the 20-day deadline and comply with the Flores agreement, while detaining their parents longer.

The move sparked a nationwide backlash, as well as a court order to halt the practice and reunite the separated children with their families.

The ACLU earlier this year said that even after the court order, the Trump administration still separated more than 900 children from their families. Officials say separations occur when a child is deemed to be in danger from their parent or guardian, but some parents have had their children taken away from them for relatively minor offenses, such as traffic violations.

In addition to the Trump administration continuing separations, immigration lawyers say the government has routinely violated the Flores agreement by detaining children for longer than 20 days.

Past efforts to fight Flores

Last year, the Trump administration asked a court to temporarily suspend the Flores Settlement Agreement and allow it to detain migrant families indefinitely. U.S. District Judge Dolly Gee rejected the request, saying the administration did not provide any new evidence to support the change.

The Obama administration also sought to extend the detention of immigrant children. In 2015, Gee rejected that request as well. That is when she said children should not be held longer than 20 days.

The administration’s latest effort would begin the process of dismantling the Flores Settlement Agreement entirely.

“Our goal remains, as in the previous administration, to provide an expeditious immigration result while holding families together,” McAleenan said.

Advocates argue the Trump administration’s immigration record indicates that migrants to the U.S. have been held in substandard conditions. They say keeping children in those facilities will subject them to trauma that is likely to have lifelong health consequences.

“The new rule today is essentially a regression, throwing out the safeguards to keep children safe that have been in place for decades,” said Joann Bautista, a policy associate at the National Immigrant Justice Center.

Migrant advocates promised Wednesday to challenge the new rules. They say the changes would get rid of independent monitors of government facilities that have poor track records. 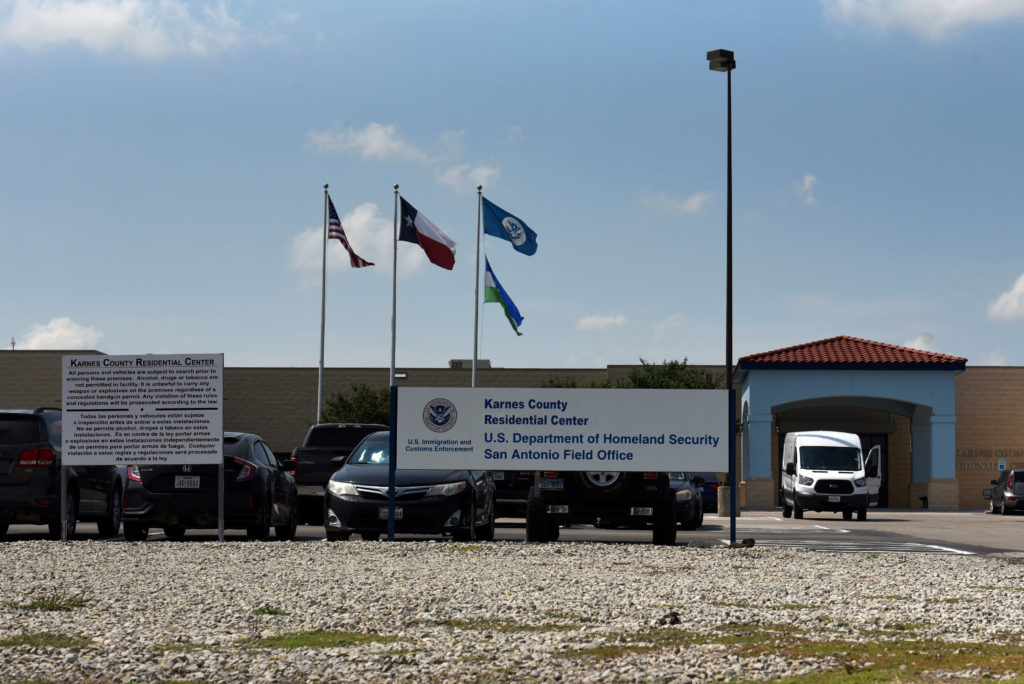 The Karnes County Residential Center, a facility that houses migrant families, is seen in Karnes City, Texas, on July 25, 2018. Photo by Callaghan O’Hare/Reuters

Even if the facilities are high-quality, some advocates say the government should do everything it can to prevent children from being detained because of the risks of psychological trauma.

“Ultimately, a gilded cage is still a cage,” Bautista said.

Will the new rule deter immigration?

Trump officials have said the Flores Settlement Agreement encourages migrants to exploit children to gain entrance to the U.S.

By eliminating the agreement, the Trump administration argues immigration officials can more quickly process the claims of the 55,000 people currently being detained and deport those without legitimate asylum claims.

“When they see you can’t get into the United States or when they see, if they do get into the United States, they will be brought back to their country, it won’t matter if they get in or not,” Trump told reporters on the White House lawn on Wednesday. “Many people will be saved and many, many women’s lives will not be destroyed and ruined,” he added.

“Ultimately, a gilded cage is still a cage.”

But many migrants come to the U.S. because they fear that staying home will endanger the lives of their children or themselves, advocacy groups say, not because they think it is easy to get into the U.S. The Trump administration also previously tried to prevent individuals who are fleeing domestic abuse from seeking asylum, but a federal judge struck down that guidance last December.

Jess Morales Rocketto, the chair of Families Belong Together, said that migrants “are super clear” about what awaits them in the U.S., “but their home countries are so much worse.”

The new rule is expected to take effect in approximately 60 days unless a judge intervenes.

Groups that advocate on behalf of migrants have already filed a motion to hold the government in contempt based on a draft of the rules that were published last year.

Once the Trump administration publishes the final rules, groups that advocate on behalf of migrants will have seven days to supplement their original argument.

A judge will then decide whether the rules meet the standards of the agreement. If they do, the rules can go into effect. If not, the rules are likely to be struck down.

Amber Partida contributed to this report.

Left: A Central American migrant carries her child just after she was sent to Mexico from the U.S. under the Migrant Protection Protocols (MPP), in Tijuana, Mexico, July 18, 2019. Under new rules proposed by the Trump administration, migrant children could be detained with their families indefinitely. Photo by Carlos Jasso/Reuters