More than a million people reportedly gathered in New York City on Sunday for this year’s pride march celebrating members of the LGBTQ community, just two weeks after a massacre at the gay nightclub Pulse in Orlando left 49 dead.

“This parade is New York City saying defiantly – we will stand up to hatred.”

Thousands of marchers were expected to participate in the celebration, which organizers said would likely be the largest held.

“This parade is New York City saying defiantly – we will stand up to hatred,” Mayor Bill de Blasio said in a statement before the march. “We will stand up to those who would try to undermine our values. We believe in a society for everyone” 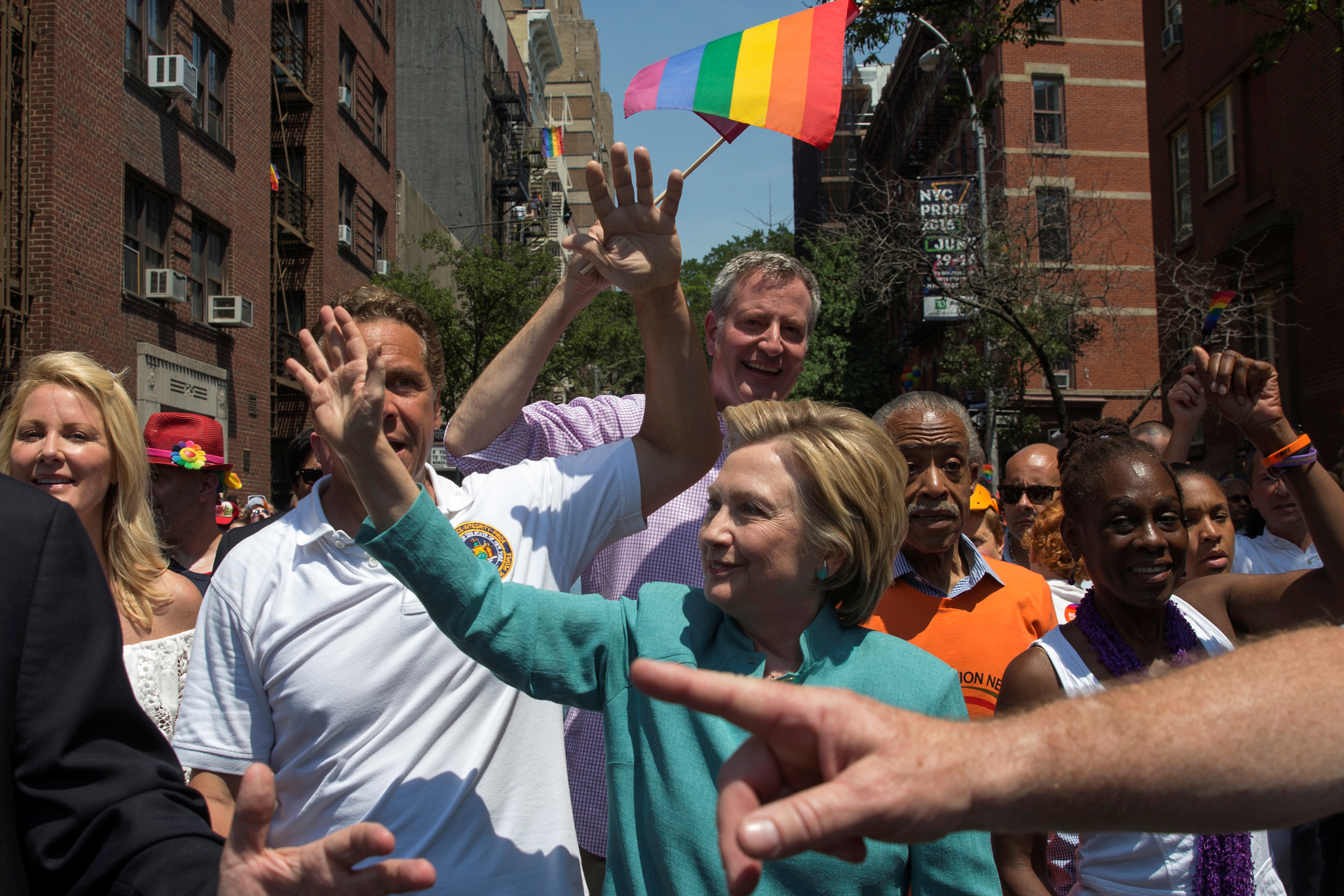 “I was the first Senator to march in this parade, but I won’t be the last,” Schumer said to cheers. 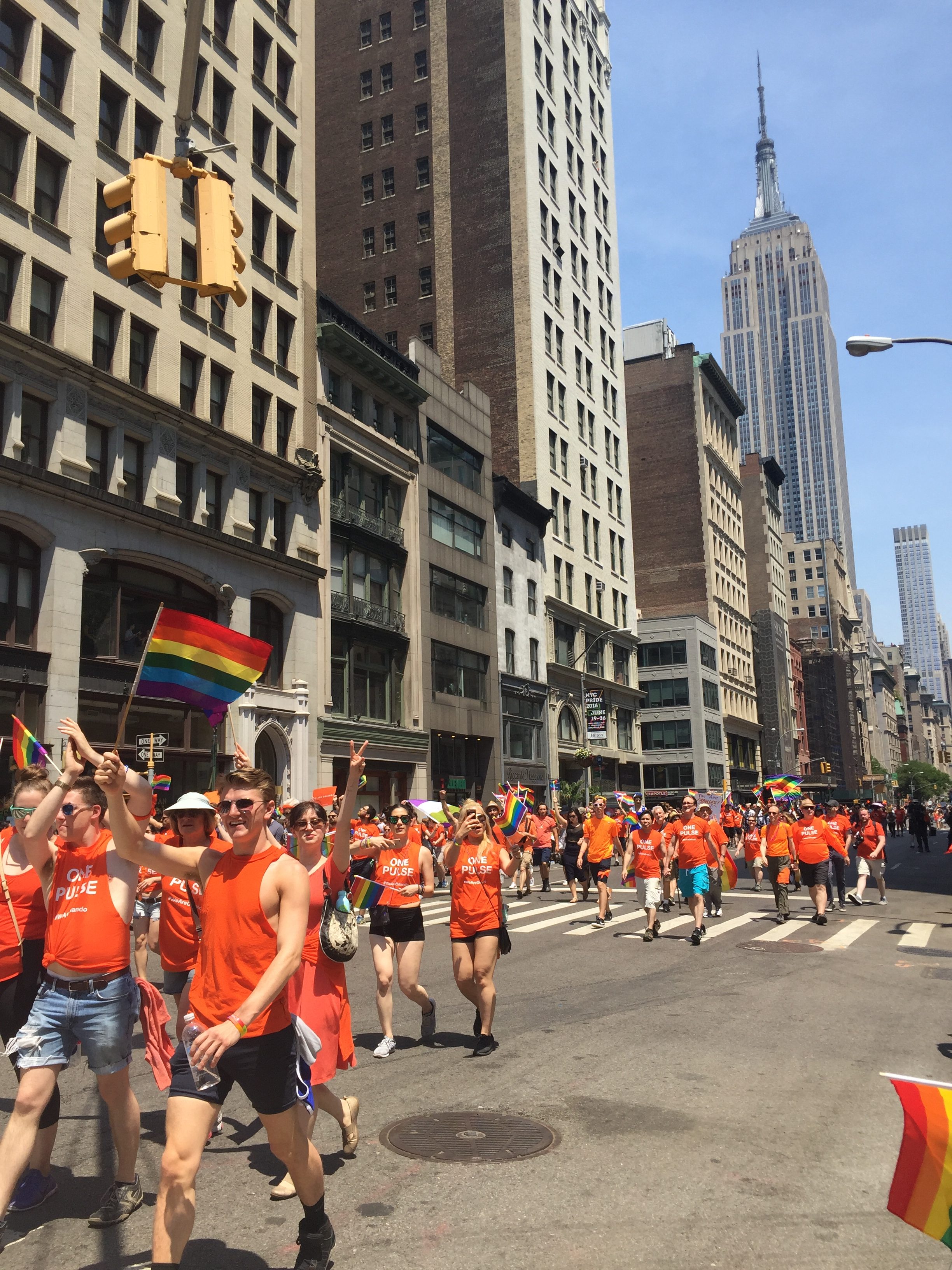 Marchers paid tribute to the 49 clubgoers killed at Pulse Nightclub at the Pride March in New York on June 26, 2016. Photo by Omar Etman/PBS NewsHour Weekend

While the crowds celebrated with the enthusiasm typical of a US pride parade, the context was markedly different from last year’s event, when the march took place days after the Supreme Court decision that legalized gay marriage nationwide.

Signs paying tribute to Orlando could be seen across the route. Toward the front of the procession, marchers in all white held placards with the names and photos of each of the clubgoers killed.

Remembering those who died in Orlando pic.twitter.com/IVKFLsIhvJ

Another group, Gays Against Guns, staged a “die in” at several points in the parade, falling to the ground to protest current gun policy. 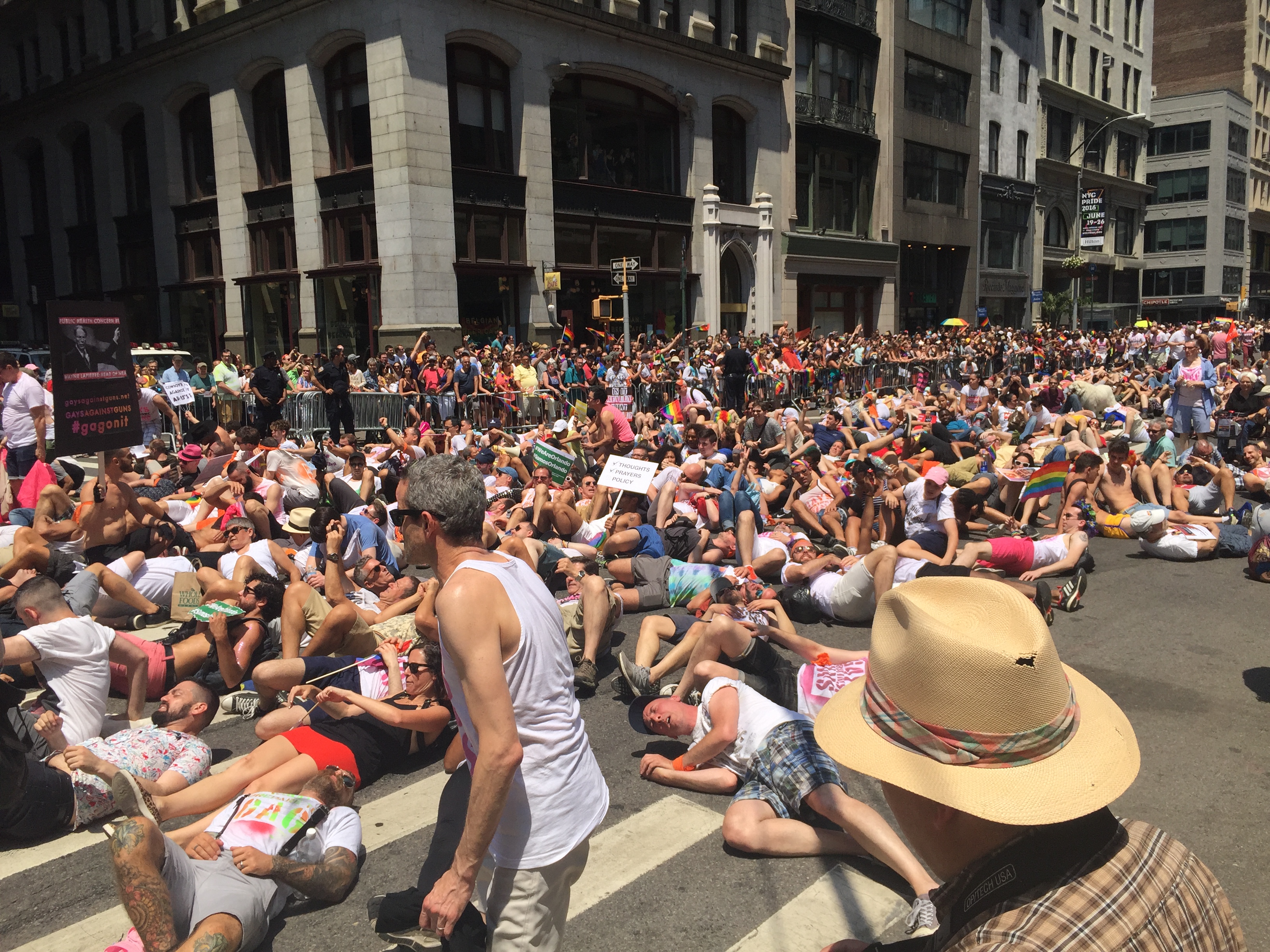 The group “Gays Against Guns” staged a “die in” during the Pride March in New York on June 26, 2016. Photo by Omar Etman/PBS NewsHour Weekend

The march began in midtown near the Empire State Building and snaked its way downtown, past Stonewall Inn, the site of the 1969 riots that marked the start of the LGBTQ rights movement.

The city increased security this year, with uniformed and plain clothes police stationed throughout the parade route, supported by helicopter and maritime patrols.

“We have extraordinary NYPD presence to make sure that this will be not only the biggest, but the safest parade we’ve ever had,” de Blasio said.

The NYPD displayed several floats and displays in the parade, including a cop car outfitted in rainbow colors.

Anthony Paden, 31, has been coming to the Pride March for over a decade. He said the last march he attended, two years ago, felt more celebratory than this one.

“Today means something different to me because of Orlando. Today means coming out and supporting gay Americans affected by the attack.”

For 24-year-old Philadelphia native Julia Clark, who was attending a pride march for the first time, she told the NewsHour she was excited but felt the festivities were tinged with sadness.

As she collected her composure before entering the mass of people gathering around Stonewall, she noticed a man holding a young girl’s hand.

The New York parade was the first of several planned across the country. Others slated for Sunday included San Francisco and Chicago.