Last June, a Multnomah County Court judge in Oregon made Jamie Shupe the first legally non-binary person in the U.S., identifying with a gender that is neither male nor female.

The case set into motion a chain reaction among other people who sought similar court orders and agencies, like the Department of Motor Vehicles, that record and store data on gender. Now, the Oregon DMV is close to offering a new option for people who have long been forced to identify as either “male” or “female” when requesting a state identification — one that could become available this summer.

“People have always existed outside of gender norms and outside of the binary but we have rendered them invisible for so long.” — Heather Betz, supervising attorney for the LGBT Law Project

“This isn’t a small fringe sub-population within the community, it’s a sizeable part of the community,” Dr. Alex Keuroghlian, director of The National LGBT Health Education Center at Fenway Health, said.

The term “non-binary” is sometimes used by people whose experience of gender is not accurately described as “male” or “female.” Some non-binary people are also transgender, and there are about 1.4 million transgender people in the U.S., including about 20,000 people in Oregon, according to the Williams Institute at the University of California, at Los Angeles School of Law. While there is little data on the non-binary community, about one-third of nearly 28,000 respondents to the 2015 U.S. Trans Survey said they were non-binary.

A ‘ripple effect’ from non-binary activists

Shupe took the judge’s order to Oregon’s DMV and requested a new ID, a series of events that felt like it “came out of the blue,” DMV spokesman David House told the NewsHour Weekend last August.

The agency began researching, studying state laws and figuring out how to update its electronic record-keeping system, which dates to the 1960s. It also consulted with local law enforcement, insurance companies and other agencies that share data on sex and gender.

With support from LGBTQ advocacy group Basic Rights Oregon, the agency decided its third option would be “X,” which already exists on driver’s licenses in Ontario, Canada, along with passports issued by New Zealand and Australia. The “X” option for passports is permitted by the International Civil Aviation Organization, an agency of the United Nations.

Shupe’s court order encouraged other people to seek legal non-binary status, including Sara Kelly Keenan of Santa Cruz, California, who became the second legally non-binary person last September. The Intersex and Genderqueer Recognition Project, who represented Keenan, helped secure court orders for more than 20 others, many of them in California and Oregon. And in March, the Multnomah County Court in Oregon — the same court that granted Shupe’s change — also granted a Portland resident a legal change to agender, another first for the U.S.

The DMV held several public hearings to gather input, where residents have given “overwhelmingly positive” feedback, House said. The Oregon Transportation Commission is expected to vote to approve the change on June 15, the final step in the process. 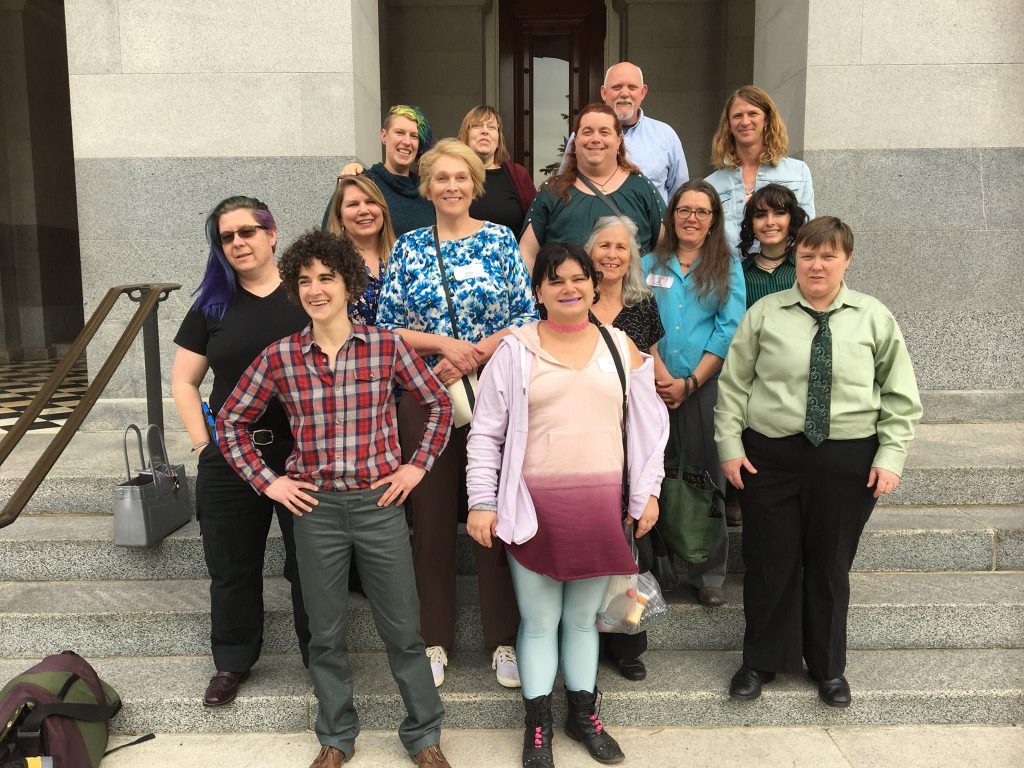 A group from the Intersex and Genderqueer Recognition Project visits the California State Capitol in Sacramento, California, on Tuesday, April 4, 2017.

If they do, the “X” option could be available in Oregon as soon as July 3, House said.

This would make Oregon the first state to offer it, while activists continue to push for other state and national precedents to expand definitions of gender.

In 2015, Army veteran Dana Zzyym — who, like all other non-binary people quoted in this piece, uses the pronoun “they” — sued the State Department after being denied a passport that would reflect that they are non-binary and intersex. A federal judge ruled in Zzyym’s favor in November, requiring the State Department to re-examine its policy.

In a hearing for that case last July, attorney Ryan Parker, representing the U.S. Department of Justice, noted that there was no existing precedent in the U.S. but said that if a state made one, it “may be grounds upon which the State Department may want to reconsider its policy.”

Since then, state lawmakers in California have also introduced SB 179, which would add an additional category for non-binary residents on driver’s licenses.

Douglas Lorenz, media director at the Intersex and Genderqueer Recognition Project, said he anticipated a “ripple effect” following Oregon’s change. “The second state to do this will have the benefit of Oregon’s work to make this happen,” he wrote in an email to the NewsHour Weekend.

Lambda Legal, who represented Zzyym in the national suit, is currently waiting for further updates from the State Department, which declined to comment.

This new legal status is significant for activists pushing for recognition of a range of gender identities. But it has also raised questions for people, non-binary and otherwise, who are unsure of how hospital systems, housing and other institutions will react to an ID that reads “X.”

Julia McKenna, a housing advocate based in Salem, Oregon, submitted a 13-page public comment to the DMV on May 10, requesting that the agency further research how the “X” option would interact with housing, educational institutions, employers, law enforcement and health care.

“This approach is only going to be as effective as the cultural competence of the staff that’s implementing it.” — Alex Keuroghlian, director of The National LGBT Health Education Center

“Unfortunately, the systems that overlap are not up-to-date in being able to serve non-binary people or ensure equal access to services,” McKenna, who is non-binary, wrote. “This becomes an alarming legal issue if non-binary people are further marginalized and unable to access systems and services that they are entitled to under civil rights laws covering non-discrimination in government services.”

To give people the “X” option before doing this research, McKenna said, “would be unconscionable, lazy, and sloppy.”

McKenna added to the NewsHour Weekend, “You’re essentially asking non-binary people, who are already experiencing disproportionate amounts of discrimination and violence, you’re asking them to be your guinea pig.”

McKenna said they worry that a person with an “X” on their ID could be denied access at a men’s or a women’s shelter. Other housing, such as re-entry housing and housing for drug and alcohol treatment, is sometimes segregated by gender.

READ NEXT: The complications of ID for non-binary people — and how it could change soon

Allan Lazo, executive director of the Fair Housing Council of Oregon, said the council is planning to reach out to shelters to educate them on the change if it becomes reality. “System-wide, this is such an evolving area. Folks really need to pay attention to what their policies and practices are,” Lazo said.

An increasing number of hospitals around the country have added options for gender in the electronic systems where they track patient data, including Oregon Health & Science University, but not all of them.

And some insurance providers might not be set up to accommodate “X” IDs, which “could generate mismatches” between hospital and insurance data and potentially delay coverage, she said.

Keuroghlian of Fenway Health said that state employees and health workers who will be encountering these IDs will need training on non-binary gender identities. “This approach is only going to be as effective as the cultural competence of the staff that’s implementing it,” Keuroghlian said.

Nina Nolen, a 25-year-old non-binary Portland resident, received their first driver’s license this month. Nolen said it felt “weird” to choose between M and F and that they would be interested in the “X” option.

The third option could be more accurate for non-binary or some trans people, but could also draw unwelcome attention to their identity in potentially unsafe situations, Nolen said. “All of this is based on the idea that people would feel safe enough in their community marking the ‘X’, essentially coming out to the DMV employee, and coming out to every cop every time if they get stopped for whatever reason,” Nolen said.

These concerns are outside of the purview of what the DMV set out to do, which was provide a third option with public input, said House.

And Heather Betz, the supervising attorney for the LGBT Law Project at the New York Legal Assistance Group, pointed out that trans and non-binary people have always faced challenges in health care and housing. Without dismissing issues that have been raised, she said having a more accurate ID is a good first step toward equality.

“People have always existed outside of gender norms and outside of the binary but we have rendered them invisible for so long,” Betz said. “Now, people are standing up and saying, ‘This doesn’t represent me.’”

Left: Jamie Shupe is the first person in the U.S. to be legally designated as non-binary. Photo courtesy of Jamie Shupe