Outpouring of grief as victims of Bronx fire laid to rest

NEW YORK — A Bronx community gathered Sunday to pay its final respects to perished loved ones, a week after a fire filled a high-rise apartment building with thick, suffocating smoke that killed 17 people, including eight children.

The mass funeral capped a week of prayers and mourning within a close-knit community hailing from West Africa, most with connections to the tiny country of Gambia.

Amid the mourning, there was also frustration and anger as family, friends and neighbors of the dead tried to make sense of the tragedy.

“This is a sad situation. But everything comes from God. Tragedies always happen, we just thank Allah that we can all come together,” said Haji Dukuray, the uncle of Haja Dukuray, who died with three of her children and her husband.

The dead ranged in age from 2 to 50. Entire families were killed, including a family of five. Others would leave behind orphaned children.

There were 15 caskets in all that lined the front of the prayer hall. They ranged in size — some no bigger than small coffee tables, containing the bodies of the youngest souls who died. 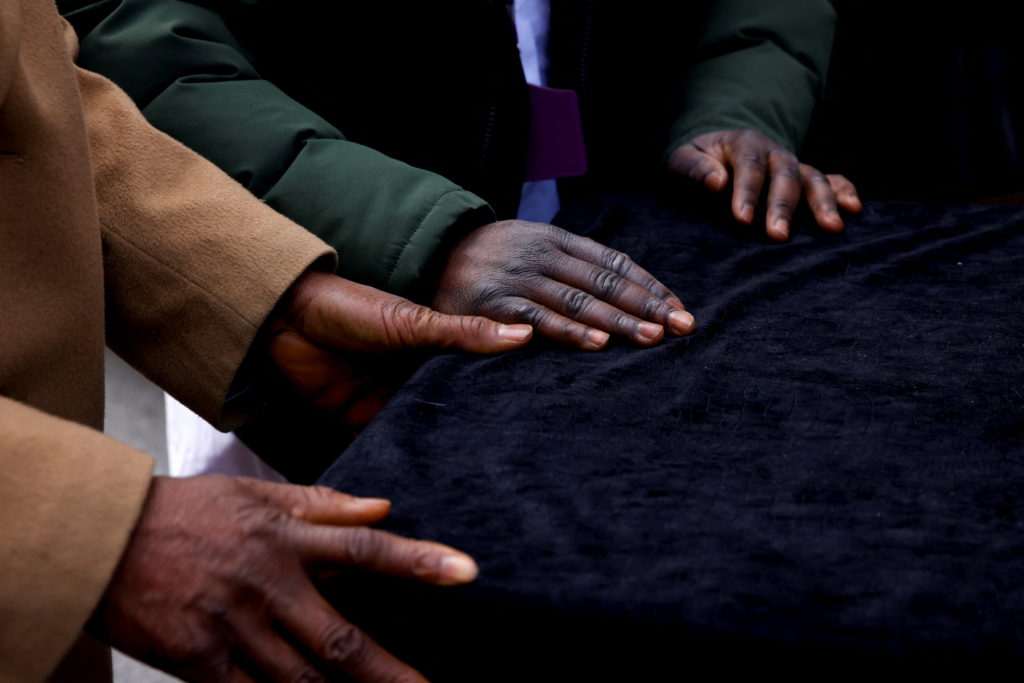 People transport a casket after a mass funeral of the victims of the Twin Parks North West multi-level apartment building fire at the Islamic Cultural Center in the Bronx borough of New York City, U.S., January 16, 2022. Photo by Shannon Stapleton/Reuters.

“One week they were with us … now they’re gone,” said Musa Kabba, the imam at the Masjid-Ur-Rahmah mosque, where many of the deceased had prayed.

Earlier in the week, burial services were held for two children at a mosque in Harlem.

After Sunday’s services in New York City, 11 caskets were to be transported to a cemetery in New Jersey for burial. Four of the victims were expected to be repatriated to Gambia, as requested by their families, a Gambian government official attending the service said.

All week, family members had been anxious to lay their loved ones to rest to honor Islamic tradition, which calls for burial as soon after death as possible. But complications over identifying the victims delayed their release to funeral homes.

All of the dead collapsed and died after being overcome by smoke while trying to descend down the stairway, which acted as a flue for the heavy smoke.

The funeral was held at the Islamic Cultural Center, 2 miles (3 kilometers) from the 19-story apartment building where New York City’s deadliest fire in three decades unfolded.

Parts of the service was delivered in Soninke, a language spoken in Gambia and other parts of West Africa.

Hundreds filled the mosque and many hundreds more filled tents outside or huddled in the cold to pay their respects. The services were beamed onto jumbo screens outside and in other rooms of the mosque.

Because of the magnitude of the tragedy, funeral organizers insisted on a public funeral to bring attention to the plight of immigrant families across New York City.

“There’s outcry. There’s injustice. There’s neglect,” said Sheikh Musa Drammeh, who was among those leading the response to the tragedy,

Officials blamed a faulty space heater in a third-floor apartment for the blaze, which spewed plumes of suffocating smoke that quickly rose through the stairwell of the 19-story building.

Some residents said space heaters were sometimes needed to supplement the building’s heat and that repairs weren’t always timely.

“We want the world to know that they died because they lived in the Bronx,” Drammeh asserted. “If they lived in midtown Manhattan, they would not have died. Why? Because they wouldn’t need to use space heaters. This is a public outcry. Therefore, there has to be responsibility from the elected officials to change the conditions that causes death every single day.” 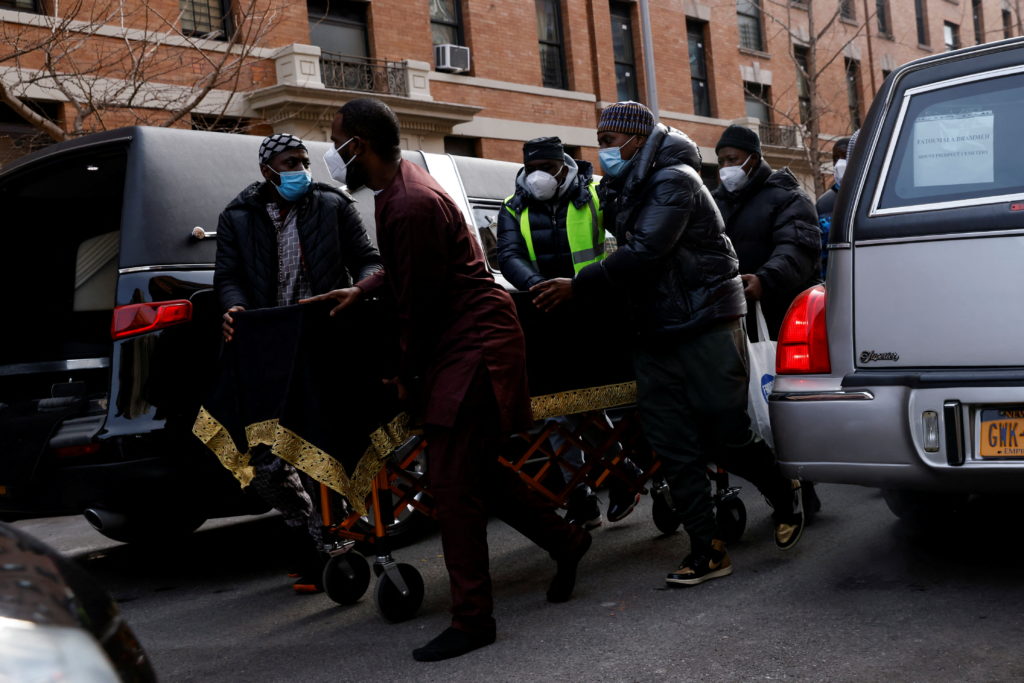 People transport a casket after a mass funeral of the victims of the Twin Parks North West multi-level apartment building fire at the Islamic Cultural Center in the Bronx borough of New York City, U.S., January 16, 2022. Photo by Shannon Stapleton/Reuters.

“When tragedies occur, we come together,” Schumer said.

“I am here to express the pain all New Yorkers are experiencing,” Adams later added.

New York Attorney General Letitia James vowed to investigate, saying “there were conditions in that building that should have been corrected.”

The investigation into the fire is ongoing.

Much of the focus centers on the catastrophic spread of the smoke from the apartment. The fire itself was contained to one unit and an adjoining hallway, but investigators said the door to the apartment and a stairway door many floors up had been left open, creating a flue that allowed smoke to quickly spread throughout the building.

In the wake of the deaths, a coalition of officials, including federal, state and city lawmakers announced a legislative agenda they hoped would stiffen fire codes and building standards to prevent similar tragedies from happening.

The proposals range from requiring space heaters to automatically shut off and mandating that federally funded apartment projects install self-closing doors on units and stairwells that would have to be inspected on a monthly basis.

As families bid farewell to their loved ones, others remained in hospitals, some in serious condition, because of smoke inhalation.

Fundraisers have collected nearly $400,000 thus far. The Mayor’s Fund, Bank of America and other groups said 118 families displaced by the fire would each get $2,250 in aid.