Demonstrators gathered on a section of I-94 on Saturday morning in Chicago, temporarily shutting down five lanes of traffic, to protest gun violence and advocate for greater community investment in areas affected by it.

As they marched, protesters chanted, “What do we want? Peace! When do we want it? Now!” Others carried signs reading “We need jobs,” and “Stop this senseless violence.”

Thousands took to the expressway on foot and on bikes at about 10 a.m. local time, blocking all northbound lanes of traffic. Flanked by Illinois State Police and Chicago police on bikes, the demonstrators moved northbound toward Chicago’s downtown.

As they marched, protesters chanted, “What do we want? Peace! When do we want it? Now!” Others carried signs reading “We need jobs,” and “Stop this senseless violence.” One woman, holding a poster with a photo of a young man, chanted, “Never forget Matthew Rogers, November 20, 2016.”

Initially, protesters were limited to a three-lane stretch of the expressway, a full blockade prevented by rows of law enforcement that formed a barrier between car traffic and the protesters. Then, after about a half hour, authorities closed all five lanes for activists.

After those lanes closed, Gov. Bruce Rauner tweeted that he was “disappointed in the Mayor,” saying there had been “an agreement in place.” He called on Mayor Rahm Emanuel “to put an end to this kind of chaos,” saying he would “work with him in good faith and urge him to do his job so that the people of Chicago feel safe.” The Associated Press reported that the lanes reopened less than an hour and a half after they had closed.

Earlier this week, Illinois State Police said that marchers on the expressway would face arrest, but stated early Saturday that an agreement to close off a portion of the highway “had been reached,” according to the Associated Press. Organizers disputed this claim, saying that their intention to completely block the northbound interstate was unwavering.

Rev. Michael Pfleger, a community activist and senior pastor at St. Sabina Church on the city’s South Side, led the effort along with Gather Activism and youth-led organizations including the March for our Lives Chicago and the Chicago Strong coalition. Rev. Jesse Jackson also joined the protesters. 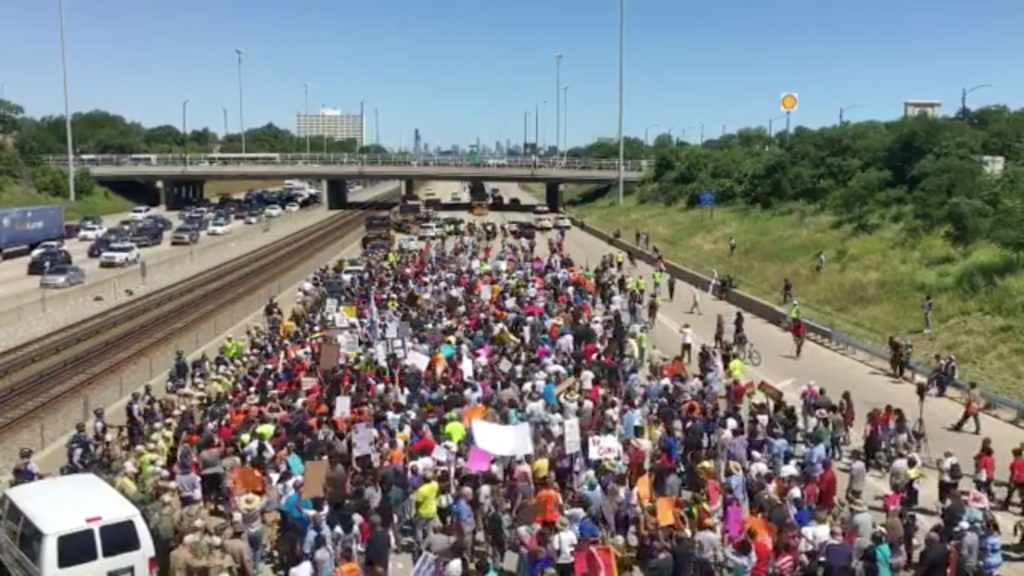 In 2018 alone, 1,378 people have been shot in the city of Chicago, according to the Chicago Tribune. Eighty-three of those victims have been under the age of 17. In the past year, 501 people died in gun-related homicides, the Chicago Tribune also reported. Many of those shootings occur on the south and west sides of Chicago, in neighborhoods that are predominantly non-white and are comparatively poorer than other parts of the city.

Activists emphasize that focusing on youth and investment in communities is central to reducing violence. Chicago Strong lists five demands on its website, including resources for their communities, more restrictive gun laws, jobs, improving schools and more economic development.

“Without proper funding in schools, without trauma centers, without youth jobs created by the city, there’s no way for students to flourish… to grow up and support their families,” said Natalie Daskal, a 16-year-old March for Our Lives Chicago activist.

The coalition also wants Rauner to sign SB 337, a bill that expands the rules for gun dealers and requires state police to make a “reasonable” effort to make data on gun crimes public. Organizers say this would ensure that the state can better combat illegal gun sales without having to rely solely on federal enforcement. The bill has passed both the Illinois House and Senate. In March, Rauner vetoed similar legislation.

The purpose of their organizing is “to fight for each one of our lives,” said Lucy Sanchez, a 16-year-old youth activist with Chicago Strong.

“These youth organizers are clear eyed and strong willed and they know what they want. They’re not backing down. They’ve been saying, ‘We’ve been living with this all of our lives; we’ve been fighting against gun violence in our neighborhoods all of our lives,’” Brenna O’Brien, the Chicago communications lead for Moms Demand Action, said.

For Kimberly Lymore, an associate minister at St. Sabina, the questions for government officials are: “What more can they do? What more do they need to do?”

Left: Thousands of activists march onto Chicago Dan Ryan Expressway to protest violence in the city on July 7, 2018, in Chicago, Illinois. Anti-violence protesters aimed to shut down the northbound lanes of the major interstate in an effort to press public officials to address common sense gun laws, joblessness and access to quality education. Photo by Kamil Krzaczynski/Getty Images