Hard conversations are never going to be easy — but they can be more civil. Some 58 percent of Americans are dreading talk of politics this Thanksgiving, according to our latest PBS NewsHour-Marist poll. We hope this guide can help you and your family survive your holiday feast.

We’ve gathered advice from some of PBS NewsHour’s most respected authorities on civility and put together a handy placemat you can print out and share during your holiday meal. 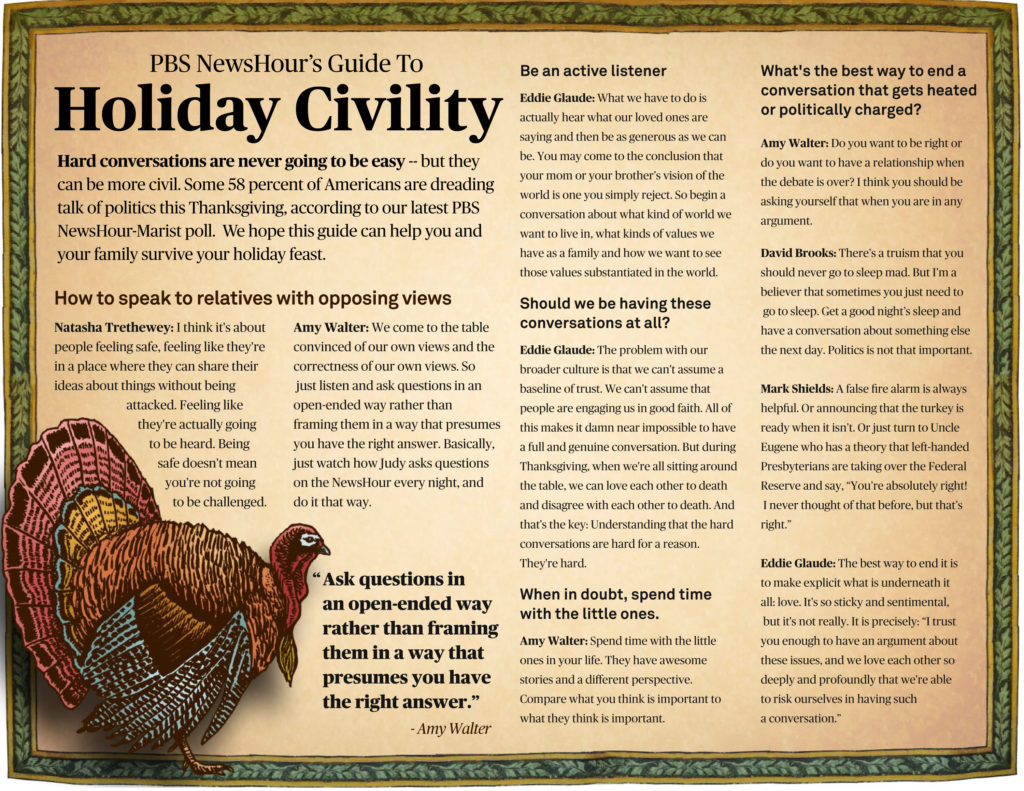 Download a printable image or pdf our our placemat to help set your Thanksgiving table.

How to speak to relatives with opposing views

Ask questions in an open-ended way rather than framing them in a way that presumes you have the right answer.

Amy Walter: We come to the table convinced of our own views and the correctness of our own views. So just listen and ask questions in an open-ended way rather than framing them in a way that presumes you have the right answer. Basically, just watch how Judy asks questions on the NewsHour every night, and do it that way.

Be an active listener

Eddie Glaude: What we have to do is actually hear what our loved ones are saying and then be as generous as we can be. You may come to the conclusion that your mom or your brother’s vision of the world is one you simply reject. So begin a conversation about what kind of world we want to live in, what kinds of values we have as a family and how we want to see those values substantiated in the world.

Should we be having these conversations at all?

Watch how Judy asks questions on the NewsHour every night, and do it that way.

Eddie Glaude: The problem with our broader culture is that we can’t assume a baseline of trust. We can’t assume that people are engaging us in good faith. All of this makes it damn near impossible to have a full and genuine conversation. But during Thanksgiving, when we’re all sitting around the table, we can love each other to death and disagree with each other to death. And that’s the key: Understanding that the hard conversations are hard for a reason. They’re hard.

When in doubt, spend time with the little ones.

What’s the best way to end a conversation that gets heated or politically charged?

Amy Walter: Do you want to be right or do you want to have a relationship when the debate is over? I think you should be asking yourself that when you are in any argument.

David Brooks: There’s a truism that you should never go to sleep mad. But I’m a believer that sometimes you just need to go to sleep. Get a good night’s sleep and have a conversation about something else the next day. Politics is not that important.

Mark Shields: A false fire alarm is always helpful. Or announcing that the turkey is ready when it isn’t. Or just turn to Uncle Eugene who has a theory that left-handed Presbyterians are taking over the Federal Reserve and say, “You’re absolutely right! I never thought of that before, but that’s right.”

Eddie Glaude: The best way to end it is to make explicit what is underneath it
all: love. It’s so sticky and sentimental, but it’s not really. It is precisely: “I trust you enough to have an argument about these issues, and we love each other so deeply and profoundly that we’re able to risk ourselves in having such a conversation.”

Note: Interviews were edited for length and clarity.

Left: Shot of a group of people stacking their hands at a dining table. Photo by Getty Images