Poll: Most Americans dreading talk of politics at Thanksgiving dinner

2017 offered plenty to chew over. President Donald Trump’s first year in office has been full of controversy, marked by a debate over health care, a worsening opioid epidemic, and a deepening investigation into Russian interference in the 2016 election.

Even among Republican respondents, whose party controls both the White House and Congress, only 38 percent said they couldn’t wait to dish about politics this week. That was still higher than Democrats (30 percent) or politically independent voters (31 percent).

That shared sense of dread “was very interesting because it’s across the board, whether you’re a Democrat, Independent or Republican,” said Barbara Carvalho, who directs Marist Poll. 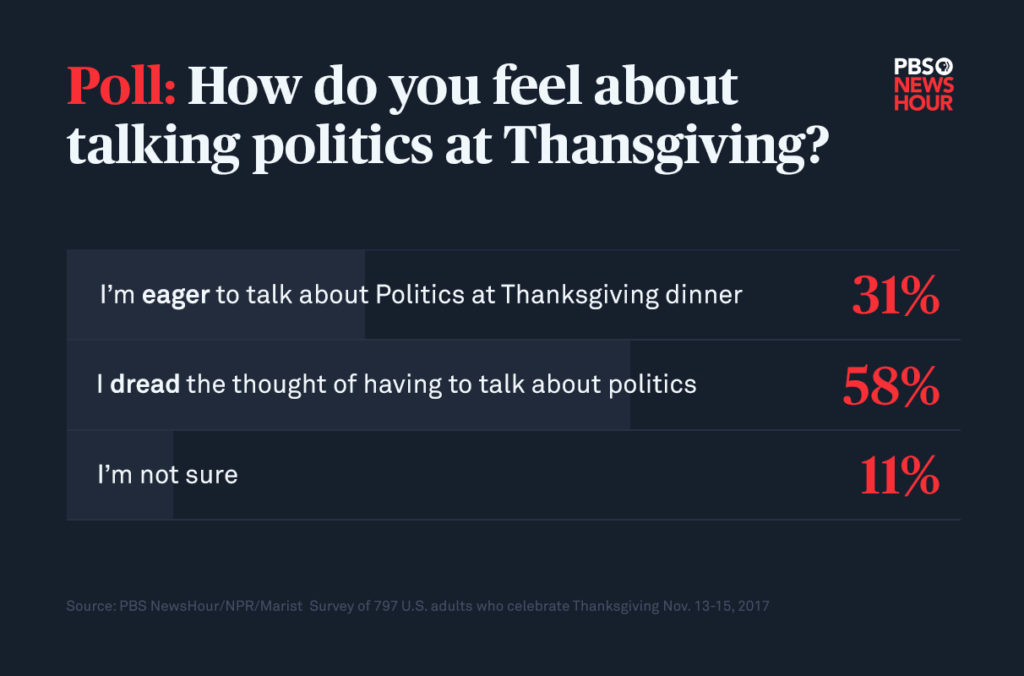 The polls also found that Americans can’t agree if there’s an upside to talking about Trump with someone whose opinion about the president differs from their own. Among U.S. adults, 43 percent said such conversations about Trump are “interesting and informative,” while another 47 percent said they are “stressful and frustrating.”

Republicans were nearly twice as likely as Democrats to view these conversations in a favorable light.

Nearly seven out of 10 U.S. adults also said they thought the overall tone and civility in Washington, D.C., hads worsened since Trump’s election, an opinion that has remained largely unchanged since June, the last time the poll asked that question.

And just one-quarter of Americans say Trump stays within the boundaries of decency when he speaks, tweets or otherwise engages in political discourse. Most respondents — 70 percent — said they think Trump primarily attacks the other side. Republicans are far more supportive of Trump’s tone with 55 percent saying he remains respectful. Only 7 percent of Democrats and 23 percent of people who identified as politically independent felt the same way.

“He hasn’t, as a president, reached out beyond his base of supporters.”

The poll findings underscore Trump’s focus on his base and failure to reach out to people who don’t support him, Carvalho said.

“He hasn’t, as a president, reached out beyond his base of supporters,” she said.

Typically, U.S. presidents enjoy a honeymoon phase with the public, however brief, before the harsh reality of a shifting economy or foreign threats emerge, said Lee Miringoff, the director of the Marist Institute for Public Opinion.

But Trump has not been received so warmly, according to approval rating polls going back to February, shortly after his inauguration. At that point, 39 percent of Americans approved of Trump’s job performance as commander-in-chief. Over the last 10 months, that number has barely budged. This month, 39 percent of U.S. adults still said they approved of Trump’s job performance, and 37 percent said they have a good impression of the president.

“This is a nation that has early picked a side when it comes to their feelings about President Trump,” Miringoff said. “This is a steady state — a stable, negative reading on the president.”

PBS NewsHour, NPR and Marist conducted a survey Nov. 13-15 that polled 1,019 U.S. adults with a margin of error of 3.1 percentage points.

Left: Nearly six out of 10 Americans said they dread the thought of anyone bringing up politics over this year's Thanksgiving dinner, according to a new poll from the PBS NewsHour, NPR and Marist. Photo by Getty Images