Allentown, Pennsylvania and the surrounding Lehigh County are home to one of the largest Syrian communities in the United States, with roots in the region dating back at least 100 years, and dozens flooding in more recently during Syria’s six-year civil war.

President Donald Trump’s executive order last week banning refugees and immigrants from seven countries, including Syria, has ignited mixed feelings among some of the 4,200 Syrian residents who live in this area.

During a recent interview in George Khallouf’s home in Allentown, his kitchen was adorned with a large photo of Syrian President Bashar al-Assad and a smaller image of Trump, with Syrian and U.S. flags draped on a wall. He immigrated to the United States from the city of Homs, Syria more than 40 years ago.

Khallouf, who voted for Trump and describes himself as a “church man,” said he is afraid that the vetting system for those fleeing the war in his home country is not stringent enough to keep America safe. Yet Khallouf said he has not seen any signs of radicalism in the Allentown area.

“They come with zero, they have nothing,” he said.  “But who knows what comes with them from ISIS?” 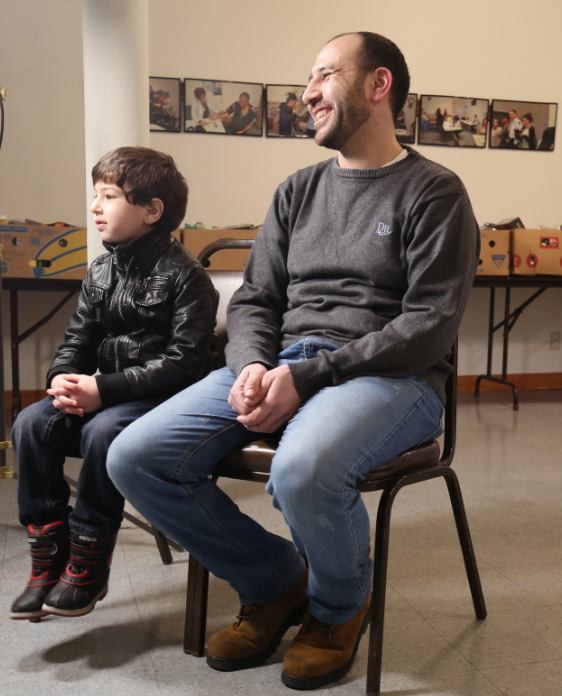 Syrian refugees Mohamad Taleb and his 7-year-old son Obaida, moved to the U.S. in 2015.

Mohamad Taleb, a Syrian Muslim, moved to Allentown in 2015 as a refugee with his wife and four children. He said he spent three years in Jordan after fleeing his home city of Douma, north of Damascus.

After more than a year awaiting a visa to the U.S., a process he said included heavy vetting by the U.S. authorities, he arrived in Allentown.

“It’s such a rough thing to be in the middle of war and destruction and watch children dying in front of you,” Taleb said, in an interview with the NewsHour. “You just want to escape with your children. You’re more afraid for your children than you are for yourself.”

Now settled, he began a job as a welder soon after he arrived in the country. His children are in school and he regularly attends English lessons with some of his family.

The order, which was reversed on Friday in a Seattle federal court, has been chastised by organizations representing refugees and immigrants in Allentown along with the city’s Mayor Ed Pawlowski.

“I think this has sparked a lot of fear in the community.” Pawlowski said on Thursday, also noting that the city has started an immigration office that includes pro bono legal services for immigrants of the city. “There’s a lot of confusion that’s out there.” 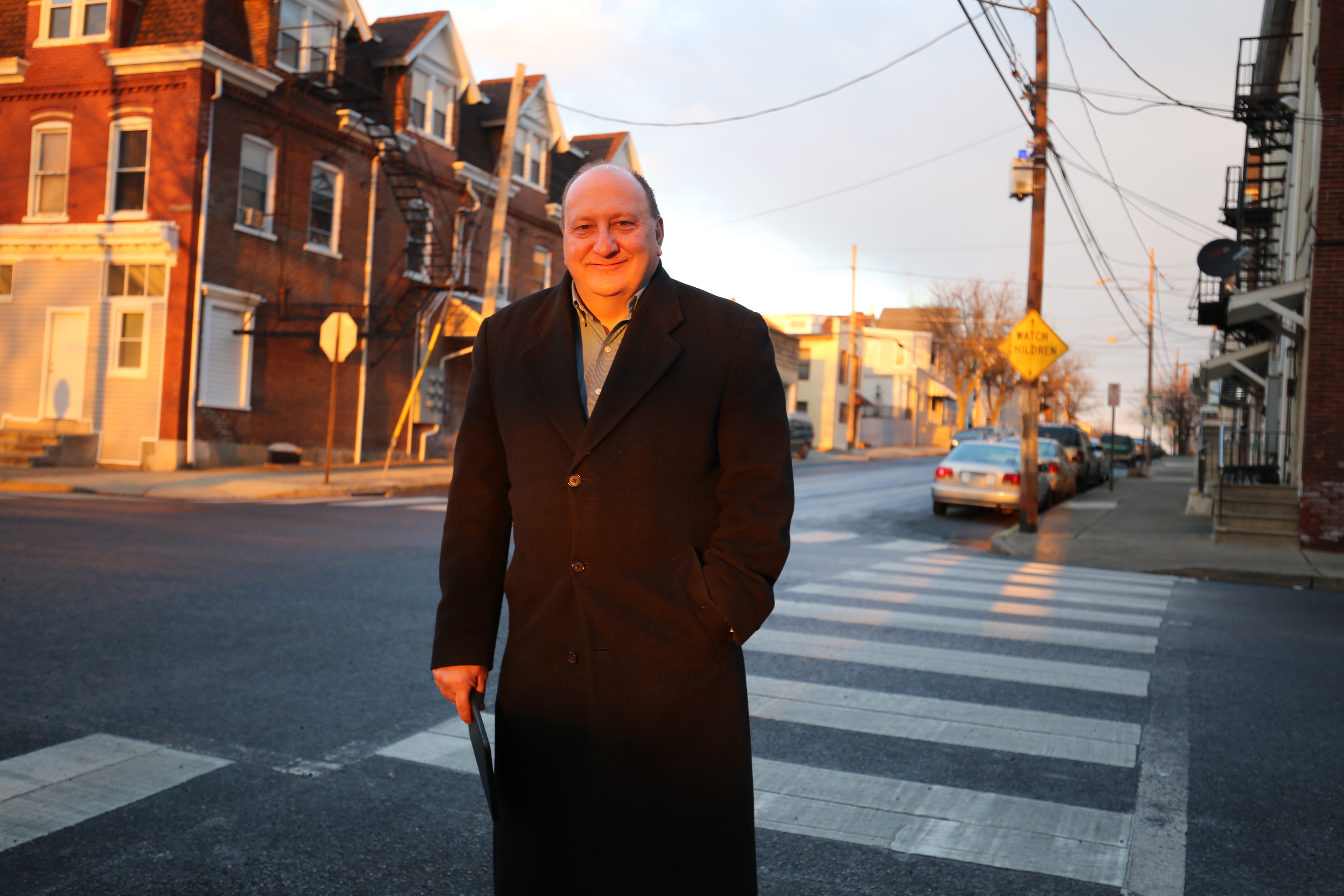 Allentown Mayor Ed Pawlowski said the White House executive order blocking entry to Syrian refugees for at least 120 days has caused a lot of confusion. The mayor is setting up an office to handle residents’ questions. Michael D. Regan/PBS NewsHour 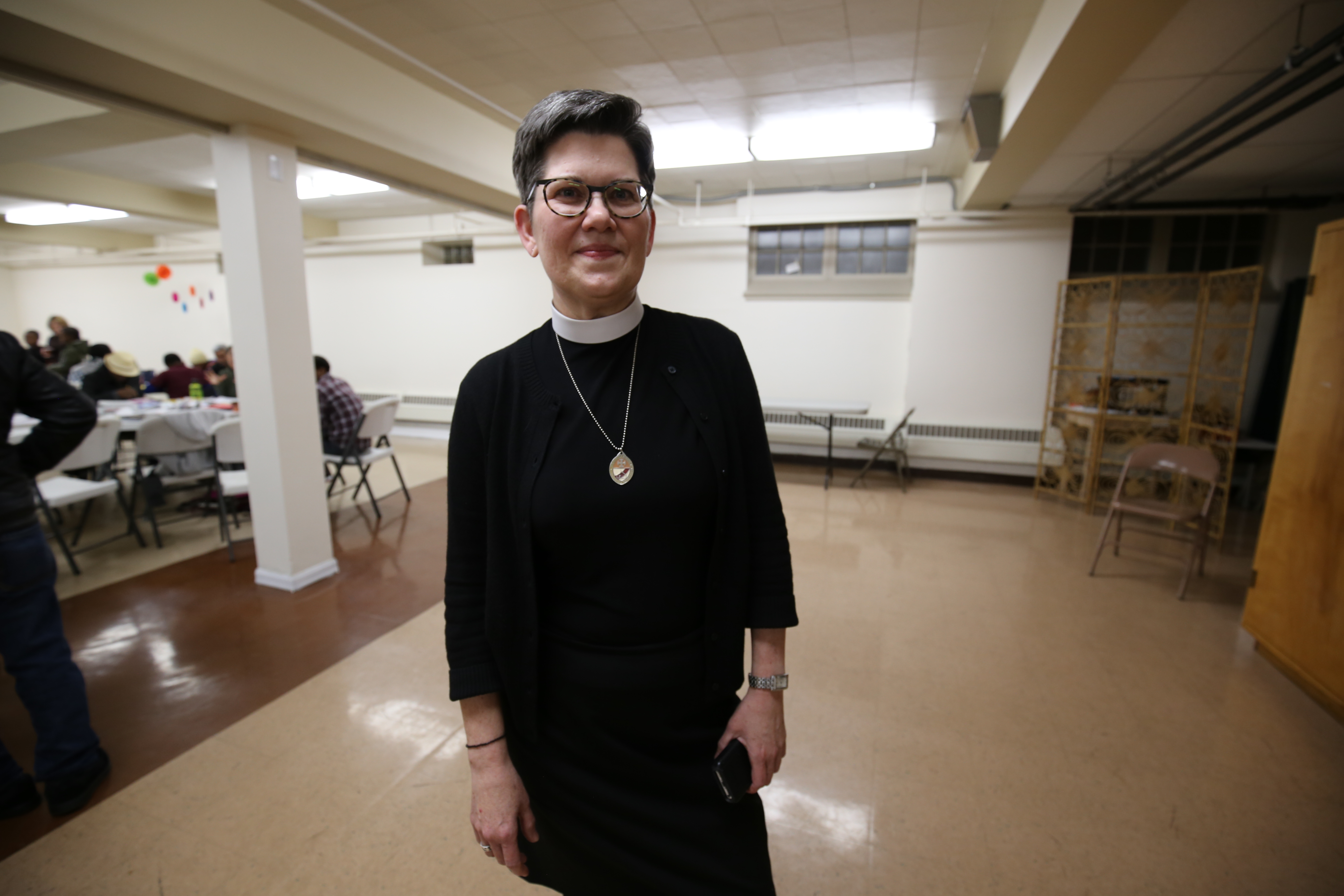 Rev. Twila Smith of the Episcopal Church of the Mediator in Allentown, stands inside a center created for refugees of the city. In the background, about 25 refugees are taking English language classes, one of the many offerings at the center. “My sense from the refugees is that this has given them hope,” she said of the center. Michael D. Regan/PBS NewsHour

Despite the reversal, Taleb still worries about his sister who continues to live back in Syria and millions more who have fled the war-weary country.

“I’m honestly very upset by it,” Taleb said of the president’s executive order. “People are trying to come over here to have a chance at a decent life, to live in a better country, to live well. He’s depriving people of that chance, and I wish he would reconsider and let people in again.” 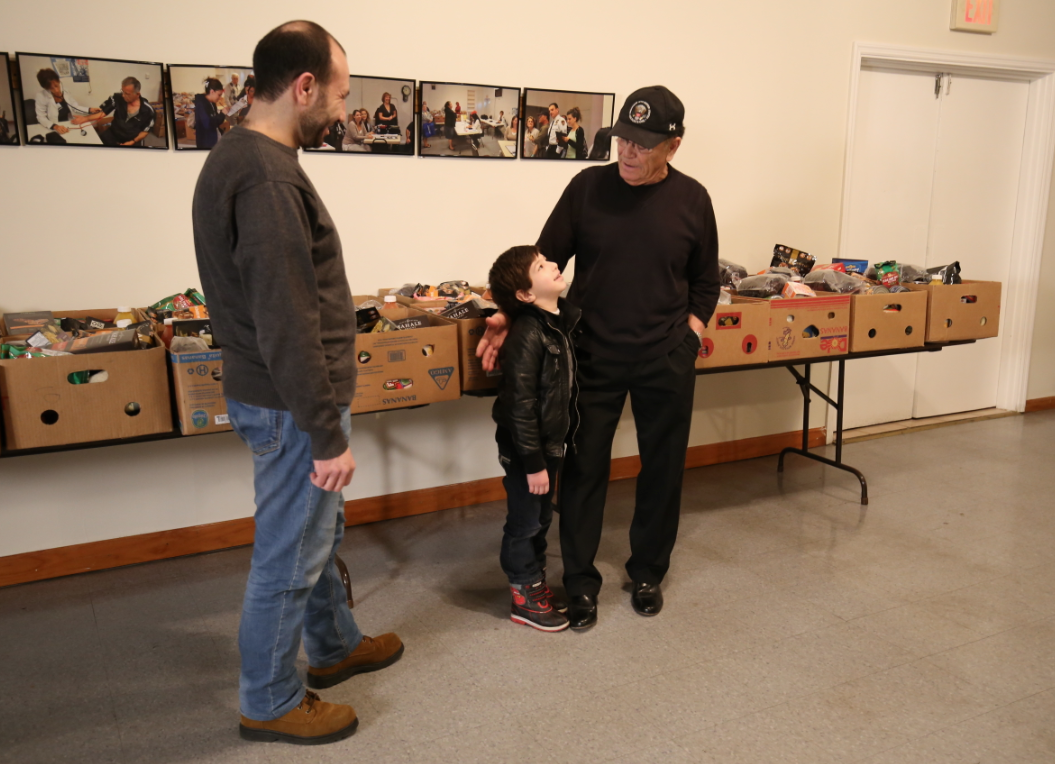 The Syrian Arab American Charity Association is an aid group providing support for immigrants, refugees and others in Allentown. The group helped the Talebs resettle in the city, where more than 4.200 Syrians live. The group’s president, Ayoub Jarrouj, shown here with Mohamad Taleb and his 7-year-old son Obaida , immigrated to the U.S. in the 1960s. “If the ban is temporary, and if it is to check to see who’s coming in, check the background, I am for it,” said Jarrouj, who is Christian. “But to say ‘no more refugees, no more Muslim refugees,’ that’s not fair. Because it’s a fact that those Muslim refugees that came to Allentown, they are example citizen. And they are great people. They love this country. They are doing a great job, and they are respected and loved by their neighbors.” 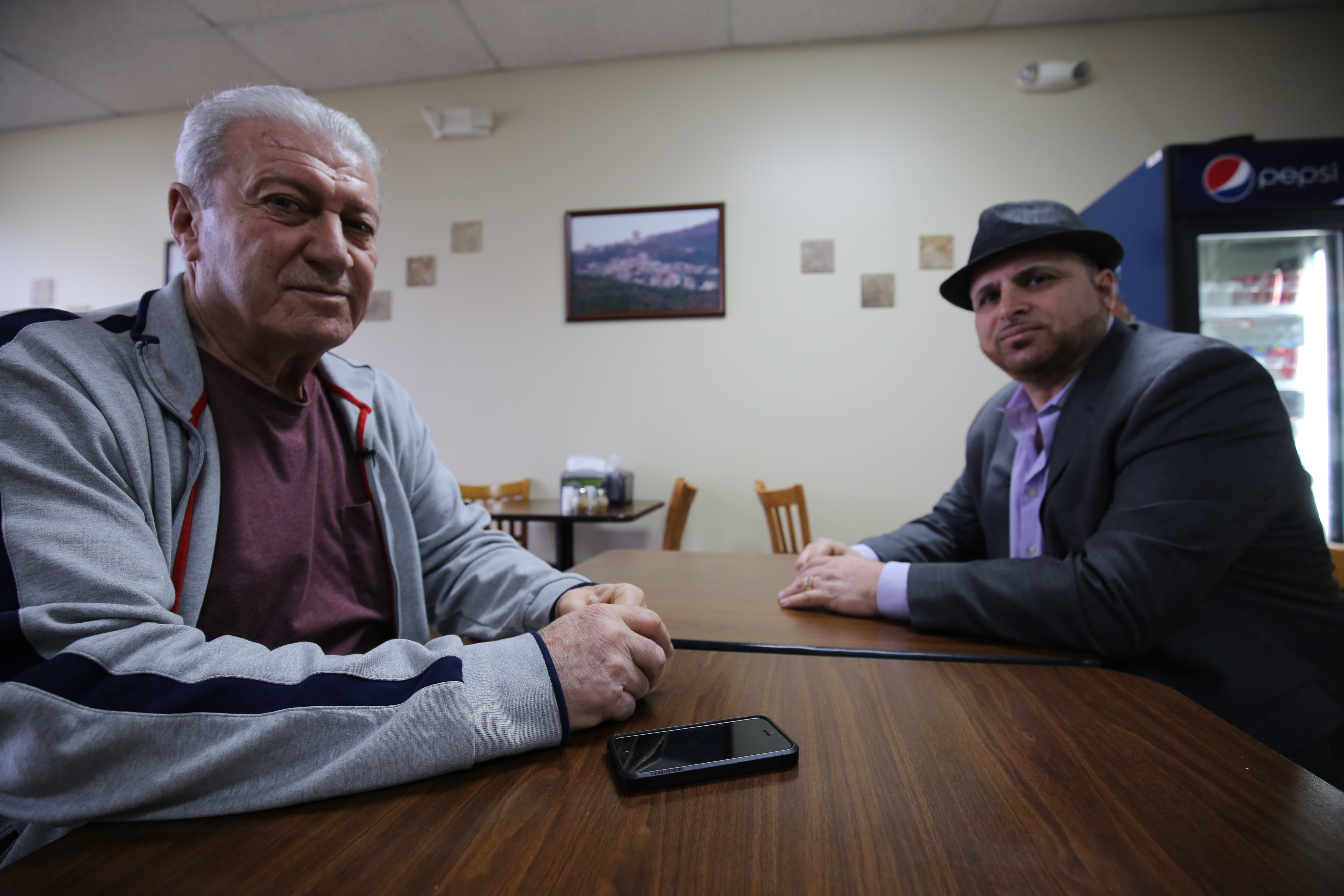 Born in Syria, Munzer Haddad, who emigrated to the U.S. in the 1960s, and Aziz Wehbey, who came in the 1990s say they are in favor of President Trump’s ban because they worry about national security. They are shown here inside an Allentown restaurant. A picture of their village is hanging on the wall in the background. Michael D. Regan/PBS NewsHour 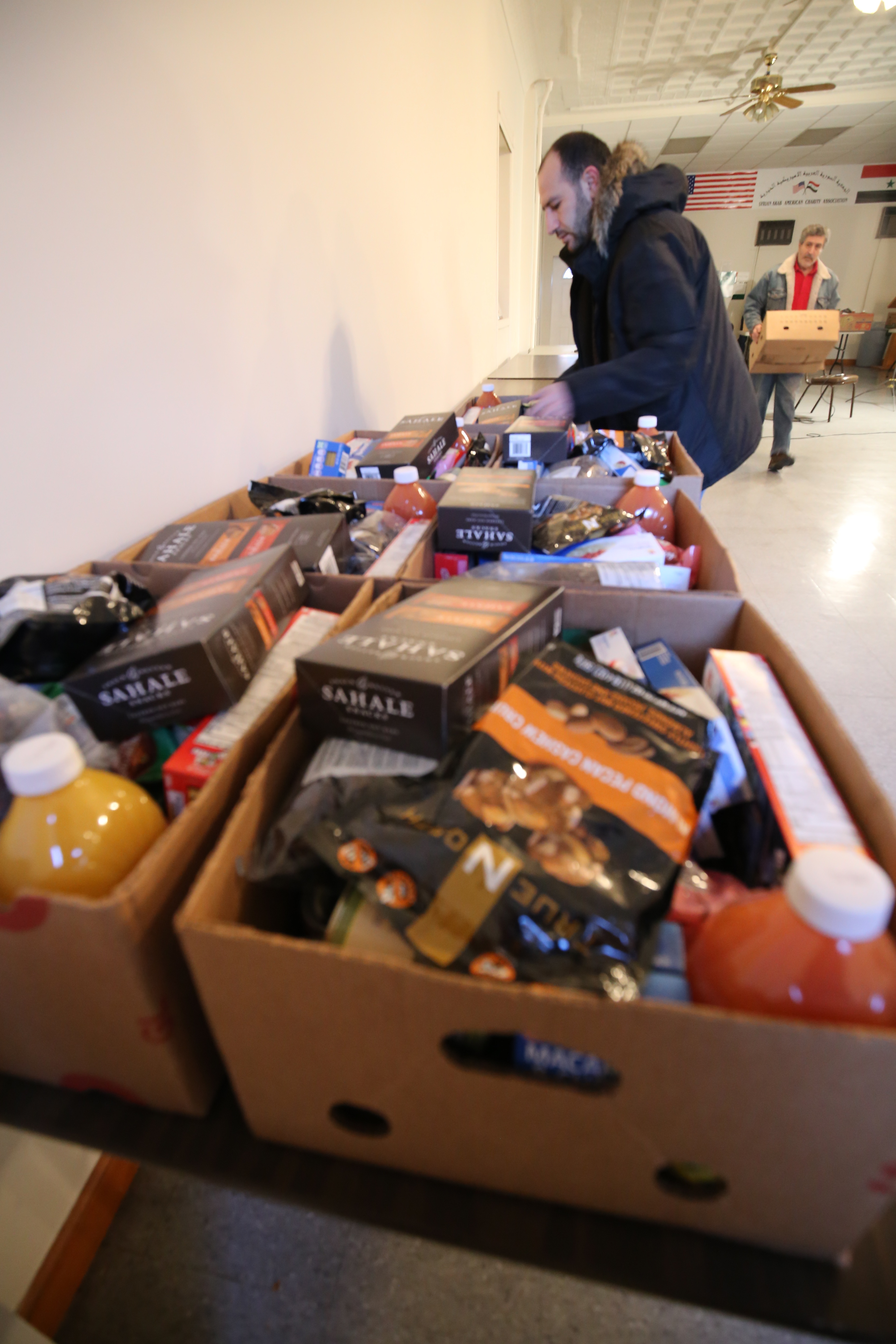 Syrian refugee Mohamad Taleb, who moved to the U.S. with his wife and four children as refugees, helps organize boxes of food for more than 170 families at the Syrian Arab American Charity Association, a non-profit serving those in need. Micheal D. Regan/PBS NewsHour

Left: George Khallouf, who immigrated to the United States more than 40 years ago, favors a recent executive order issued by President Donald Trump, that bans Syrian refugees for an indeterminate amount of time. He is shown here at his home with a photo of Syrian President Bashar al-Assad in the background, along with a picture of Trump, both of whom he supports, and American and Syrian flags. Michael D. Regan/PBS NewsHour