On Trump’s 100th day in office, march calls for action on climate change

On President Donald Trump’s 100th day in office, thousands of protesters were marching to the White House and around the country for a People’s Climate March that has become more political with the new administration.

The march originated in New York in 2014 to pressure global leaders ahead of the landmark Paris Agreement, which includes agreements from 195 countries to take steps to keep global warming below 3.6 degrees Fahrenheit.

“There was a simple demand – act,” Paul Getsos, National Coordinator for the People’s Climate Movement, said in a statement.

The 2014 march was the first of its kind, momentous and star-studded, with hundreds of thousands of people and celebrities like Leonardo DiCaprio from across the country carrying witty signs about caring for the earth. In 2015, the U.S. along with the other countries finalized the deal and then-President Barack Obama continued to make climate change a priority in his last years in office.

And they're on the move! Atmosphere is just like a parade #climatemarch pic.twitter.com/Ddi5GgvP0e

But in spite of a consensus among scientists that climate change is real and man-made, Trump denounced Obama’s actions on the issue during his presidential campaign. Calling climate change a “hoax,” he vowed to “cancel” the pact. And since he was elected, the administration has continued to downplay climate science and the effects fossil fuels have on the earth.

On Friday, the U.S. Environmental Protection Agency announced it would remodel its website, appearing to remove climate data and detailed information about a Clean Power Plan. The agency is led by Scott Pruitt, the former Attorney General of Oklahoma, who unsuccessfully sued the federal government in 2012 for allowing the agency to put limits on the release of carbon dioxide from cars, power plants and natural gas wells. 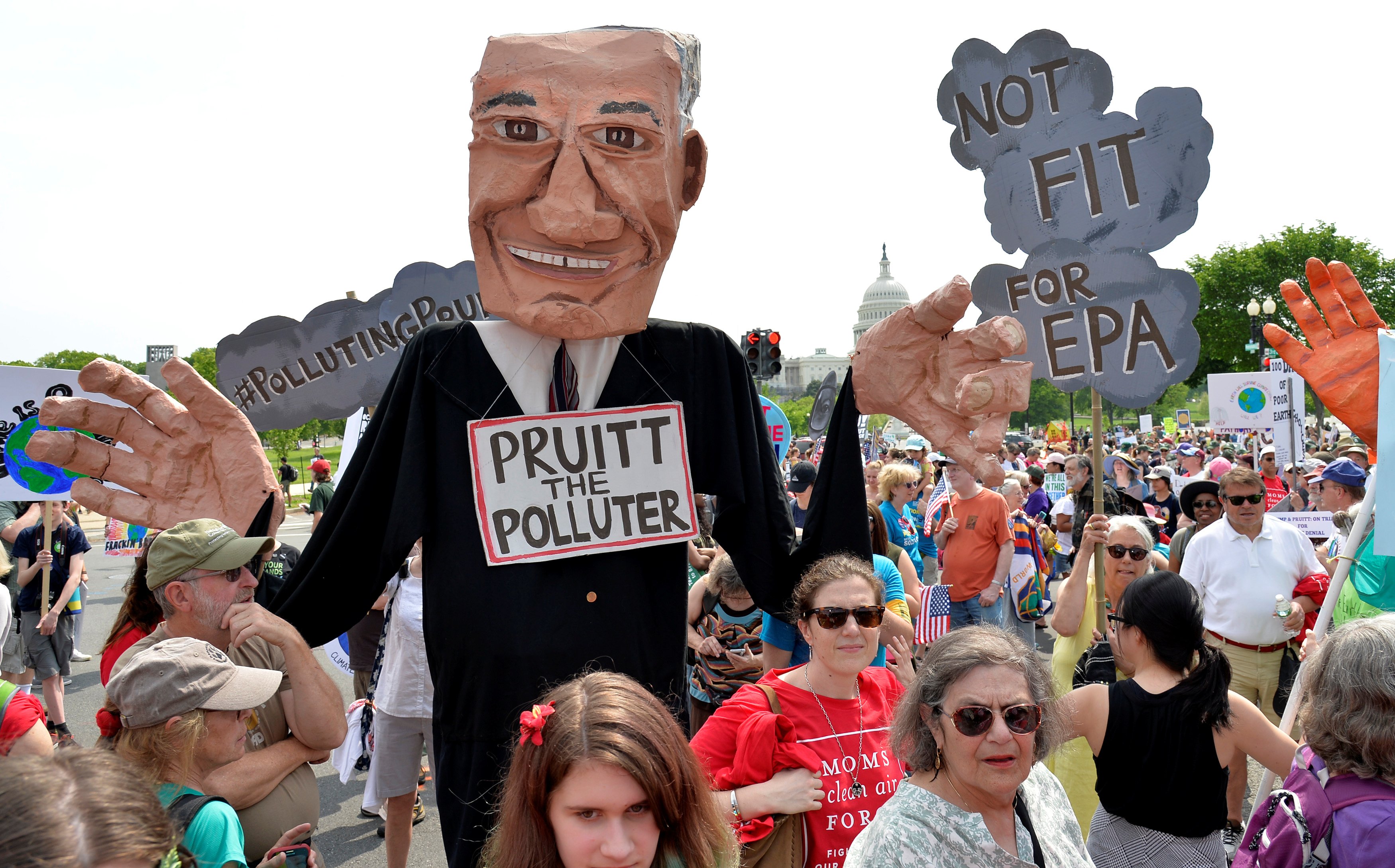 Saturday’s march was planned before November’s presidential election took place. But this year, it is one of several international demonstrations that have followed Trump’s inauguration, including a March for Science last weekend, that have an air of resistance. It was as large as the inaugural People’s Climate March, with people carrying signs that focused on climate justice and targeted top officials, including Pruitt and Trump.

The #ClimateMarch in Washington DC is moving through the streets, and it is HUGE. pic.twitter.com/tFSme9r7jh

April is already the warmest on record for the District of Columbia. On Saturday, the temperature was projected to hit the low 90s, while the current record for the date is 91 degrees. The irony was not missed by the indigenous people, scientists, labor activists, human rights lawyers, researchers, students, elected officials and others who were joining the demonstration in person or online.

rosariodawson: RT APEN4EJ: Thnk u to our indigenous allies for grounding us this morning w/ a water ceremony befor… pic.twitter.com/fC4Wtv0ccH

And we're off! Amazing turnout on the hottest day of the year so far. #climatemarch pic.twitter.com/4Wf4dvo5mO

Live at the #climatemarch. It's 90 degrees and the hottest year on record. THIS is why your voices matter! https://t.co/5EWNZlvKRA