MIDLAND, Mich. (AP) — Floodwaters surging through Central Michigan on Wednesday were mixing with containment ponds at a Dow Chemical Co. plant and could displace sediment from a downstream Superfund site, though the company said there was no risk to people or the environment.

Dow said the ponds held only water, and it has detected no chemical releases from the plant in Midland where the company was founded, though the U.S. Environmental Protection Agency said state officials would evaluate the plant when they’re able. Once the flooding recedes, Dow will be required to assess the Superfund site — contaminated with dioxins the company dumped in the last century — to determine if any contamination was released, the EPA said.

Meanwhile, the Tittabawassee River crested at just over 35 feet in Midland, about 3 feet below the forecast level. 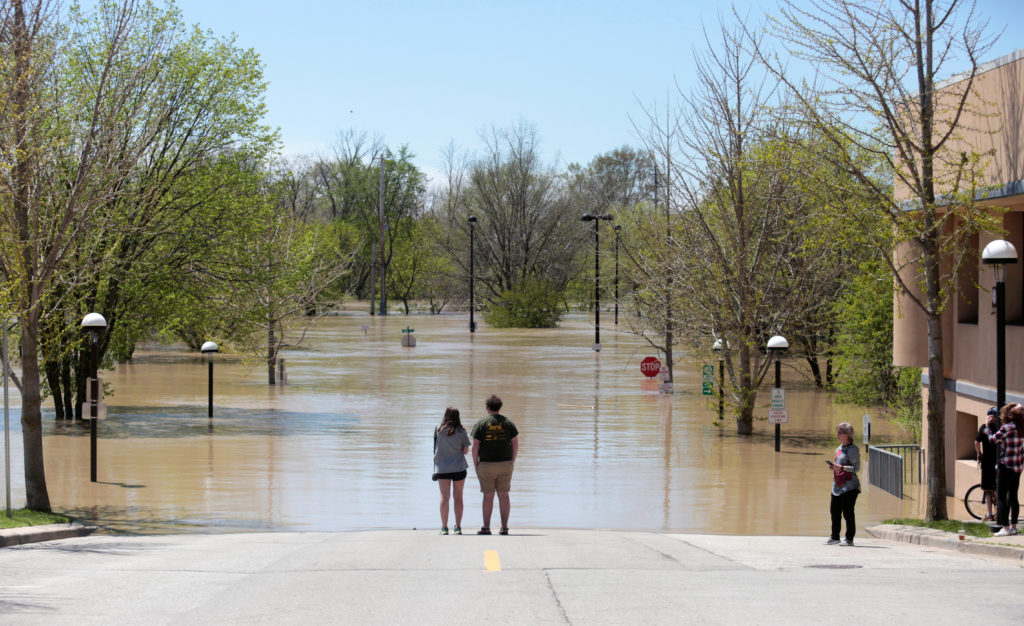 Residents look at a flooded street along the Tittabawassee River in downtown Midland, Michigan, on May 20, 2020. Photo by REUTERS/Rebecca Cook

Gov. Gretchen Whitmer had warned that the city of 42,000 people could end up under 9 feet of water by Wednesday evening after floodwaters overtook two dams and forced the evacuation of about 10,000 people from their homes.

But the danger isn’t over, and Midland officials asked that residents not return yet. The National Weather Service said communities farther downstream were bracing for flooding in the coming days.

No injuries or fatalities related to the flooding have been reported, Midland spokeswoman Selina Tisdale said.

Residents near the river were urged to seek higher ground following what the National Weather Service called “catastrophic dam failures” at the Edenville Dam, about 20 miles northwest of Midland, and the Sanford Dam, about 8 miles downriver. 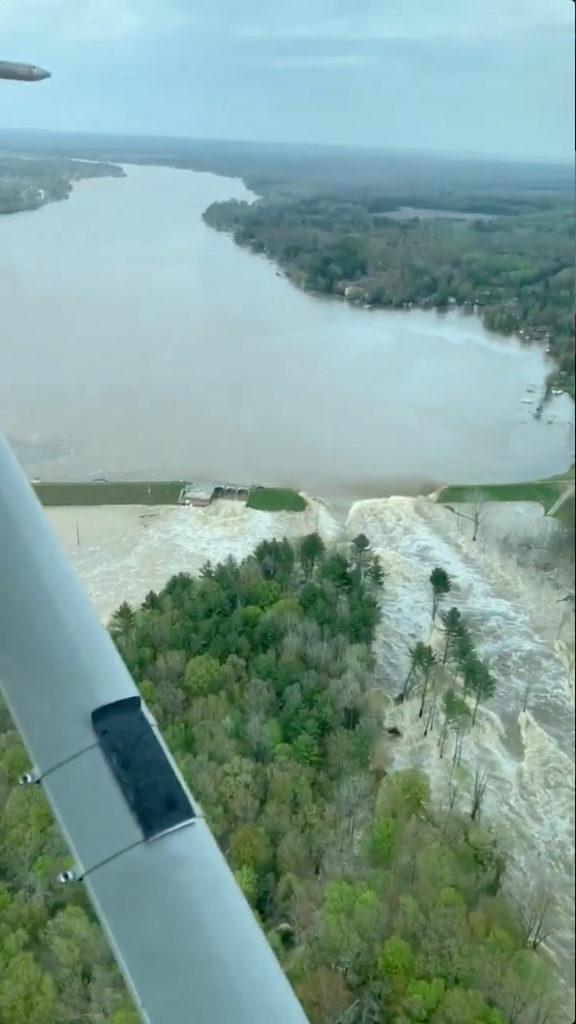 Aerial view of water from a broken Edenville Dam seen flooding the area as it flows towards Wixom Lake in Michigan, from a social media video dated May 19, 2020. Image by RYAN KALETO/via REUTERS

Midland City Manager Brad Kaye said Wednesday that the Sanford Dam is overflowing but that the extent of structural damage isn’t yet known.

If the entire dam structure were to fail, “there would be a much higher surge that will come down the river and that could raise the level much more quickly than what we’re seeing right at the moment,” Kaye said.

In nearby Edenville, Bob Yahrmarkt, 79, evacuated his home along the river on Tuesday afternoon. He said he couldn’t believe what he saw when he returned Wednesday. “Just devastation,” said Yahrmarkt.

His garage, which housed tools and equipment he amassed over 70 years, was swept away. His home was heavily damaged by water: It has three levels — two beneath the main floor, which itself was more than a foot underwater. 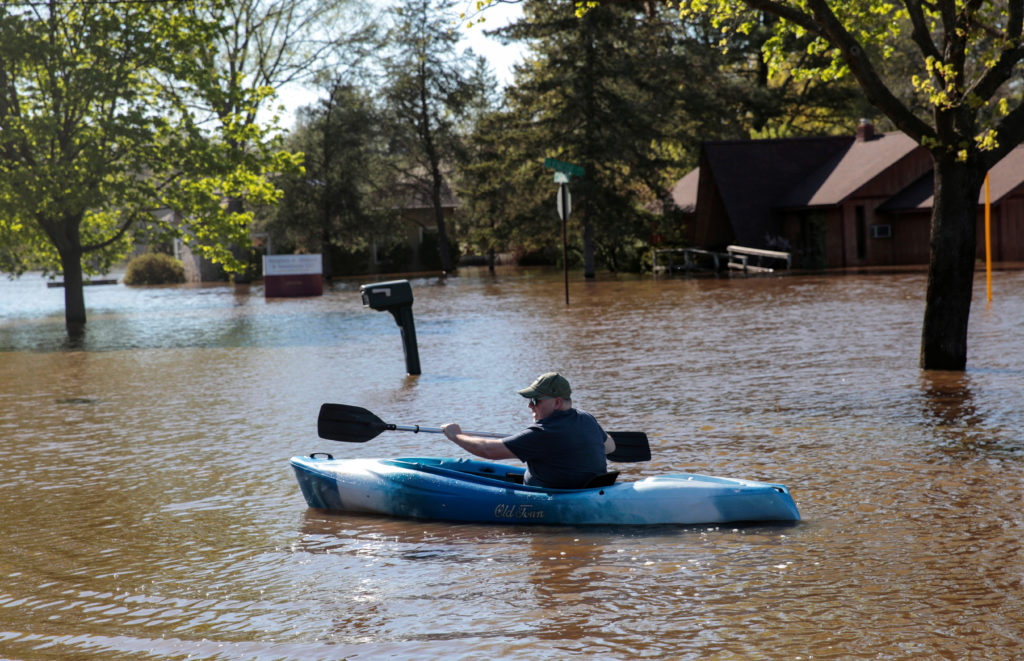 Resident Joe Ryan paddles a kayak to check on his home in a flooded neighborhood along the Tittabawassee River after the two dam failures in Midland, Michigan, May 20, 2020. Photo by REUTERS/Rebecca Cook

“I’m looking at a sand pile and concrete where the garage was,” Yahrmarkt said, noting that floodwaters also pushed his antique 1953 Ford sedan and a Harley-Davidson motorcycle around in his yard.

“It’s like someone picked up my garage and shook it.”

His neighbor, 58-year-old Dan Dionne, returned home to find everything beneath his home washed away.

“I never saw nothing like this,” Dionne said. “We had a flood before, but nothing like this. It’s like someone picked up my garage and shook it. There’s a freezer, refrigerator in my backyard. I don’t know where it’s from.”

The river topped a previous record of 33.9 feet set in 1986, the National Weather Service said. Its flood stage is 24 feet, and it had been expected to crest at about 38 feet. 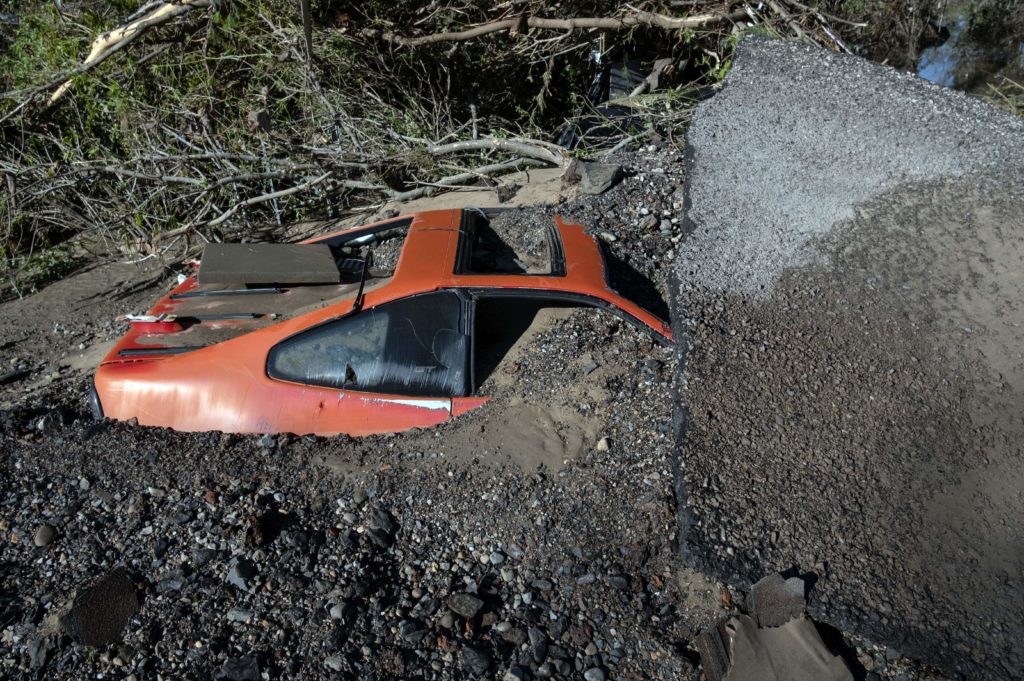 A car lies buried as flood waters from heavy rains caused mass damage in Sanford, Michigan, on May 21, 2020. Photo by SETH HERALD / AFP via Getty Images

Whitmer declared a state of emergency for Midland County, and the towns of Edenville, Sanford and parts of Midland were evacuated, Tisdale, the Midland spokeswoman, said. Midland is about 130 miles north of Detroit.

The governor said her office had been in touch with federal officials and would ask the Federal Emergency Management Agency for support.

“This is an event unlike anything we’ve ever seen before,” she said.

President Donald Trump tweeted that he was closely monitoring the situation and praised first responders. But he also took a jab at Whitmer, whom he has criticized for her stay-at-home orders to prevent the spread of the coronavirus: “We have sent our best Military & @fema Teams, already there. Governor must now ‘set you free’ to help. Will be with you soon!” 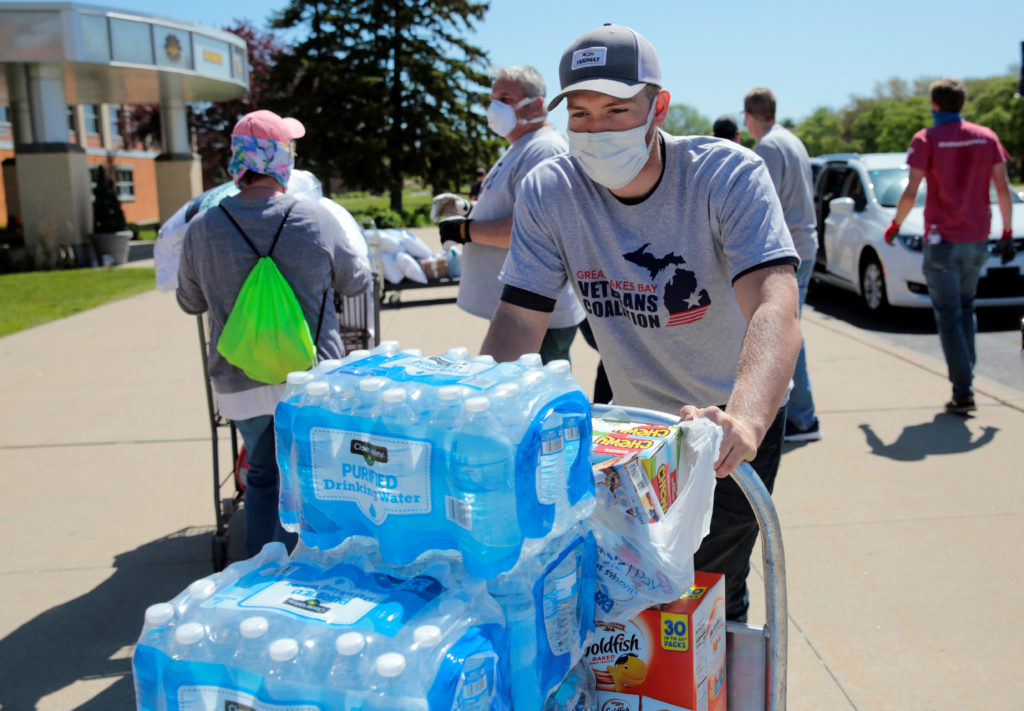 Volunteers unload water and supplies for residents evacuated from their homes along the Tittabawassee River on May 20, 2020. Photo by REUTERS/Rebecca Cook

Whitmer on Wednesday sent a letter to Trump requesting federal aid to address the flooding in Midland County. She said despite their efforts, local and state resources have been “insufficient to respond to the situation.” Whitmer also noted the availability of equipment and personnel is further limited due to “the ongoing effects and response requirements of the coronavirus pandemic.”

Trump will be in Michigan on Thursday for a visit to a Ford Motor plant in Ypsilanti.
The state has been a national hot spot for COVID-19, with more than 52,000 cases and 5,000 deaths, but Midland County has had fewer than 80 cases and under 10 deaths. Still, residents were advised to take precautions and schools set up as shelters spaced cots to adhere to social distancing guidelines.

Whitmer said the state would investigate the operators of the dams and “pursue every line of legal recourse we have.”

“The initial readout is that this was a known problem for a while and that’s why its important that we do our due diligence,” Whitmer said. 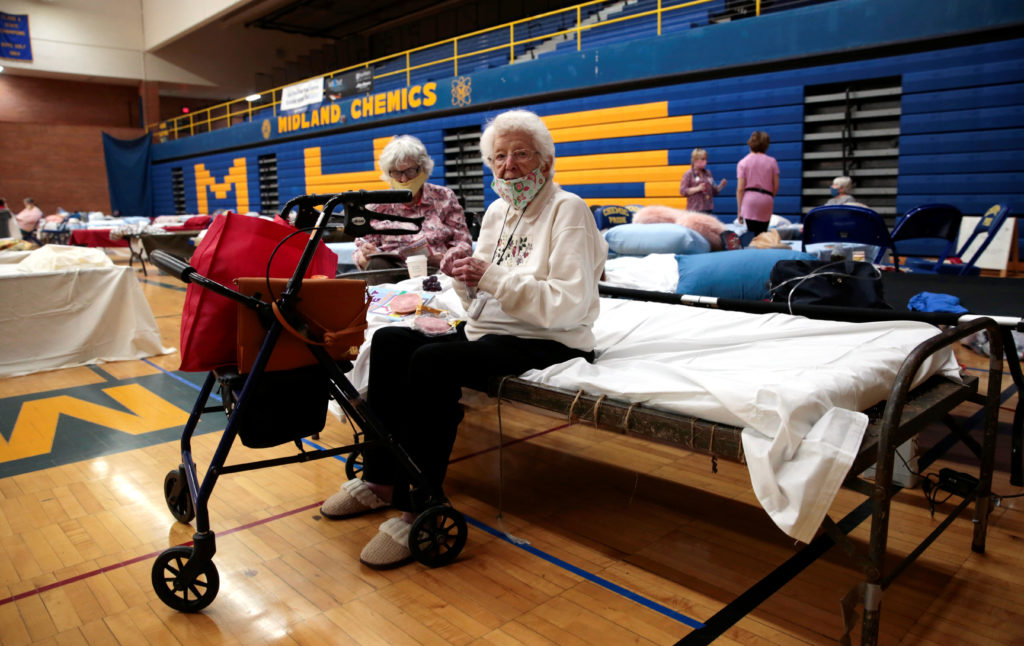 Dot Costello, 101, sits on a bed at a shelter after being evacuated from her home along the Tittabawassee River in Michigan, on May 20, 2020. Photo by REUTERS/Rebecca Cook

In 2018, the Federal Energy Regulatory Commission revoked Boyce Hydro’s license to operate the Edenville Dam due to non-compliance issues that included spillway capacity and the inability to pass the most severe flood reasonably possible. That year, the state rated the dam, built in 1924, in unsatisfactory condition.

The Sanford Dam, which was built in 1925, received a fair condition rating. Both are in the process of being sold.

The commission said it has directed Boyce Hydro to establish an independent investigation team to determine the cause of the damage to Sanford Dam, and that it would reach out to state officials regarding the Edenville Dam. It will send an engineer to assist with the investigation when it’s safe to do so.

Dow Chemical has been headquartered in Midland for more than 120 years, and its main plant sits on the city’s riverbank. It is a quintessential company town: One high school is named after the company’s founder, the other high school’s mascot is the Chemics. A Dow foundation has funded many community amenities including a botanical garden, and the city is known for midcentury modern structures first introduced by architect Alden B. Dow. 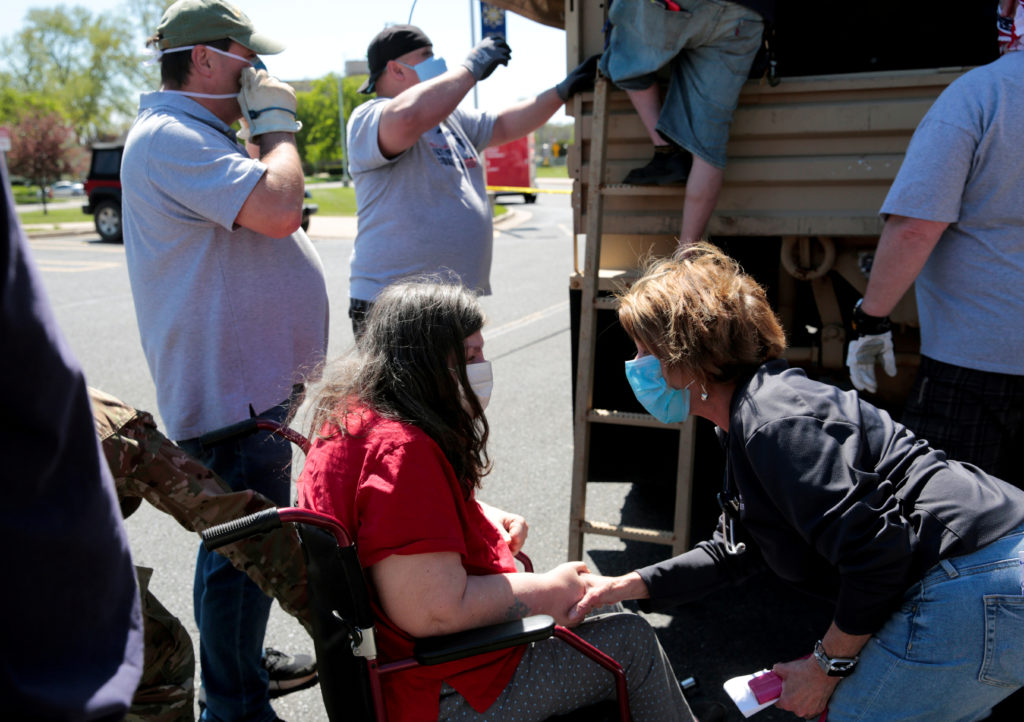 People climb down from a Michigan National Guard truck outside a shelter during the flooding along the Tittabawassee River on May 20, 2020. Photo by REUTERS/Rebecca Cook

The company, with 9,000 employees and contractors in Midland, on Tuesday shut down all operating units except those needed to contain chemicals, spokesman Kyle Bandlow said. No chemical releases have been detected, he said.

But the flooding likely will pose a significant setback to the Superfund cleanup, said Allen Burton, a professor of environment and sustainability at the University of Michigan. Dioxins released by Dow contaminated sediments and floodplains along 50 miles (80 kilometers) of the Tittabawassee and Saginaw rivers to Lake Huron’s Saginaw Bay. The federal Superfund program investigates and cleans up toxic waste sites.

Dow and the state Department of Environment, Great Lakes and Energy will have to determine where the floodwaters have moved the dioxins, Burton said. 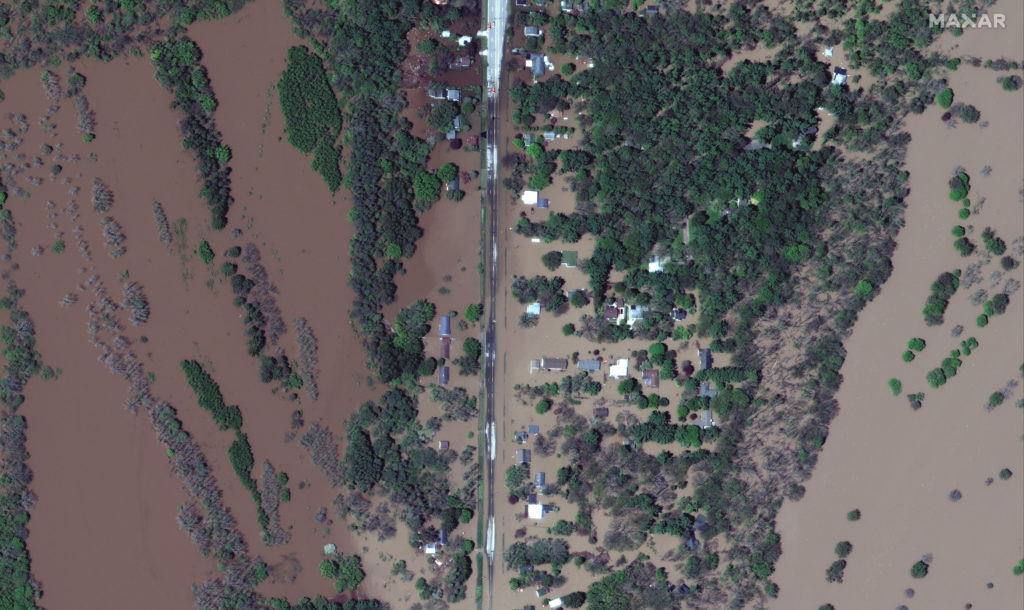 A satellite image shows a flooded street and homes after rising floodwaters, unleashed by two dam failures, submerged parts of Midland, Michigan, on May 20, 2020. Photo by 2020 Maxar Technologies/Handout via REUTERS

“They knew where all that stuff was, but the power of water is unbelievable and it’s going to move things around,” Burton said.

The Weather Service issued flood warnings because 4 to 7 inches (10.2 to 17.8 centimeters) of rain has fallen since Sunday. Heavy runoff pushed rivers higher. This coming Saturday, there’s a 30% chance of rain, with more moving into the area Sunday and Monday.

Left: An aerial view of floodwaters flowing from the Tittabawassee River into the lower part of downtown Midland, Michigan, on May 20, 2020. Thousands of residents were ordered to evacuate after two dams in Sanford and Edenville collapsed, causing water from the river to flood nearby communities. Photo by Gregory Shamus/Getty Images