As people in the United States and around the world struggle to make sense of the novel coronavirus pandemic, some are confronting not only physical health concerns, but also spiritual health. How do you best live a life of faith in a time of social distancing?

With weeks to go before the world’s major religions celebrate some of their biggest holidays of the year, The Centers for Disease Control and Prevention suggested on Sunday night that groups of 50 people or more should be avoided for the next two months. The next day, President Donald Trump tightened those recommendations, urging Americans to refrain from holding gatherings of more than 10 people.

The restrictions will have significant implications for religious practice in America, with so many traditions rooted in communal ritual. But as churches, mosques and temples do their part in limiting human interaction, the faithful are trying to settle into new routines of observance and prayer, and places of worship are harnessing technology to connect.

Just two miles away from the White House, the Episcopal Christ Church in Georgetown has suspended all services, meetings and other group activities indefinitely after a church leader tested positive for COVID-19. Rector Timothy Cole was the first confirmed virus patient in the District of Columbia, then the choirmaster and another parishioner also tested positive. Officials asked several hundred churchgoers to self-quarantine for 14 days after their potential exposure.

Rob Volmer, a member of Christ Church since 1994 who co-founded an international public relations firm, self-quarantined along with his wife and three children who are 10, 13 and 15. While at home, they check their temperatures twice a day. Volmer also works as a liaison with the D.C. health department, relaying health guidance to his congregation via email and social media. He noted that “30 to 40 people” had reached out to him with concerns.

“We’ve gotten a lot of questions,” Volmer said. “‘What does that mean? What does that look like?’ Well, you know, we’re not experts on this.”

Meanwhile, Christ Church will be holding virtual prayers with leaders relaying sermons from their living rooms via Skype. Likewise, Washington National Cathedral has closed its doors until March 26. Sunday Mass is now offered via livestream. 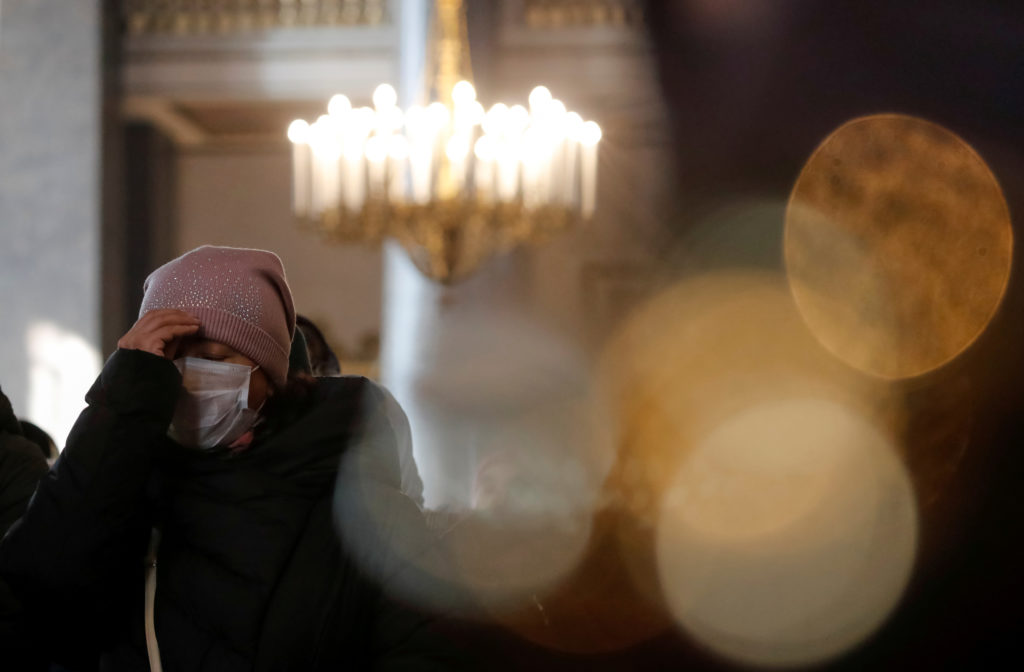 “Temporary changes in our normal routine may allow additional time to experience how precious home-centered gospel study can be,” Nelson, who is 95, said. He encouraged worshippers to use videos and technology to study gospel.

Beyond the U.S., some Italian churches throughout have remained open to the public for private prayer, despite the country largely being under lockdown while the virus has killed thousands. There, Mass can only be held without a congregation. 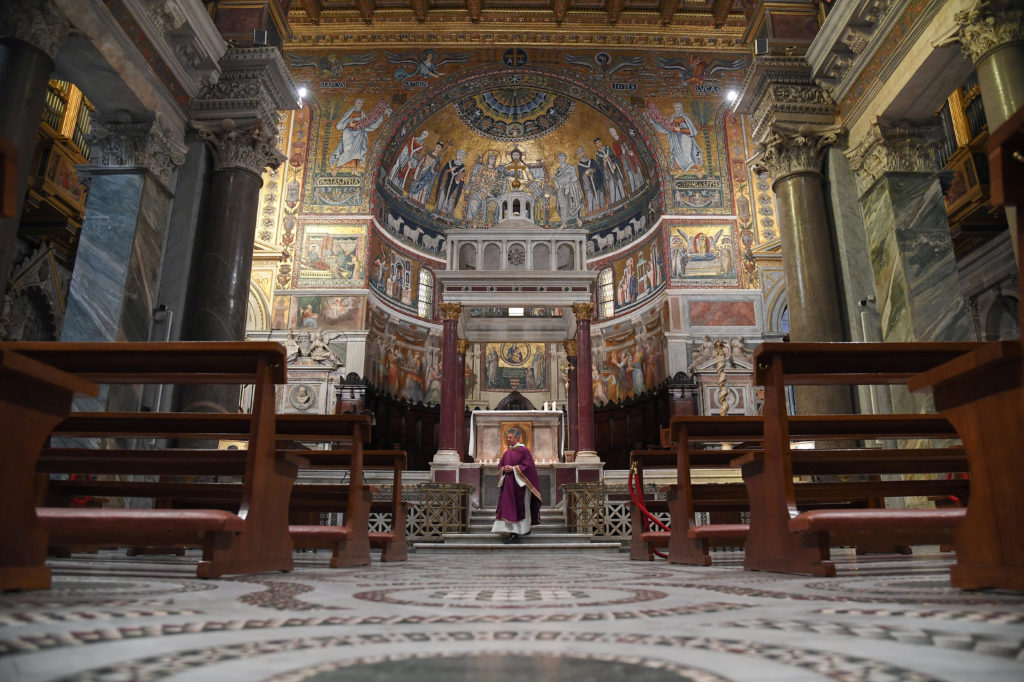 Priest Don Marco conducts Sunday mass alone in the Basilica of Santa Maria in Trastevere, as churches close to the faithful to avoid coronavirus contagion, in Rome, Italy, on March 15, 2020. Photo by REUTERS/Alberto Lingria

To a near-empty St. Peter’s Square on Sunday, Pope Francis said, “In this situation of pandemic, in which we find ourselves living more or less isolated, we are invited to rediscover and deepen the value of the communion that unites all the members of the Church.”

“Preservation of human life and human rights is far more significant than continuity of even essential practices of devotion,” the statement read. “Fear for one’s safety is a genuine Islamic reason to forgo some of the fundamental Islamic actions and rituals.”

One of the largest mosques in the U.S., Virginia’s All Dulles Area Muslim Society, known as ADAMS Center, last week canceled daily prayer services and closed educational programs at all of its locations in the state. Instead, ADAMS Center is hosting public events online. On Sunday, the organization hosted a Facebook Live with local health officials answering questions posted in real time from community members. Imam Mohamed Hag Magid has been posting positive messages and sermons to the group’s Facebook page.

The global pandemic also impacts millions of Muslims who visit Saudi Arabia to perform religious rituals at holy sites in Mecca and Medina throughout the year. The kingdom suspended all visits to these sites out of fear the novel coronavirus would spread uncontrollably. 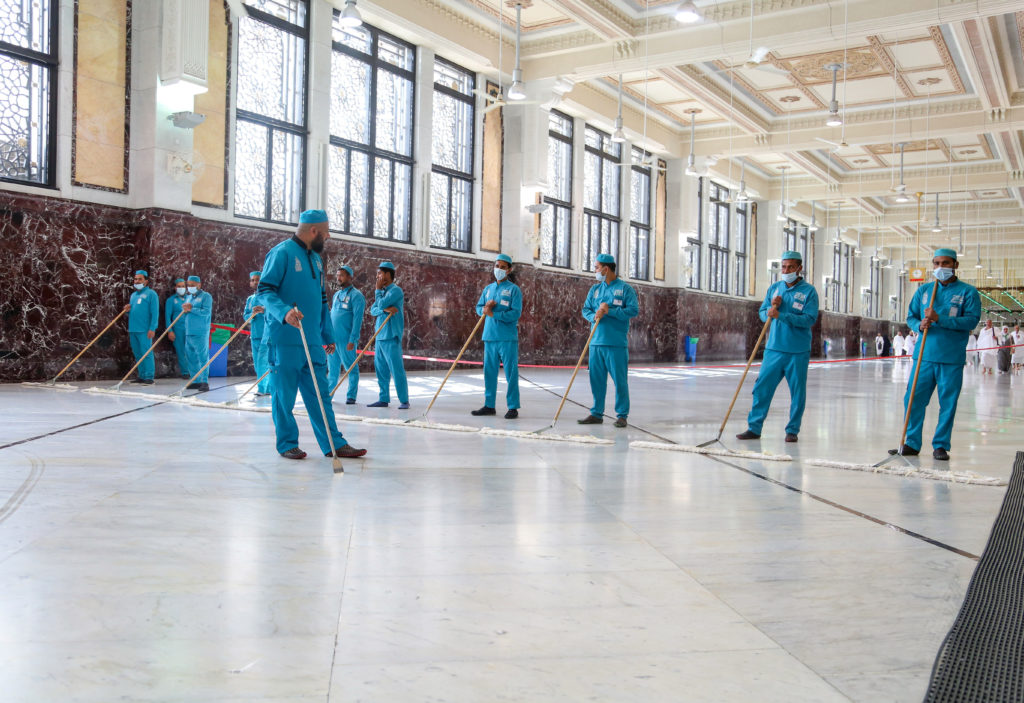 Cleaners wear protective face masks, following the outbreak of the coronavirus, as they swipe the floor at the Grand mosque in the holy city of Mecca, Saudi Arabia, on March 3, 2020. Photo by REUTERS/Ganoo Essa

On Sunday, thousands who were returning to Turkey from a pilgrimage to Saudi Arabia were taken into a 14-day quarantine. In a tweet, Turkish Health Minister Fahrettin Koca said, “Unfortunately, the test of a citizen who has returned in the last week has been positive. We’re worried about new cases.”

In the United Kingdom, mosques are shortening programs, reducing lengths of certain prayers and advising those over the age of 60 to pray at home. East London Mosque, the oldest and largest mosque in London, announced last week that Jumuah prayers will be shorter until further notice.

Jerusalem’s Western Wall, which draws Jewish worshippers from around the world, will remain open to the public for now. On Sunday, the Western Wall Heritage Center said visitors “will be separated into prayer areas of up to 10 worshipers with space between the groups.” Still, Israeli news site NI2 reported that Chief Rabbi Yitzhak Yosef wrote a letter urging people to avoid gathering at the holy site.

The Union for Judaism Reform, the congregational arm of Reform Judaism in North America, has formed a special task force to offer guidance to congregations grappling with how to live and maintain their faith during this trying time. They’ve posted guidelines on their site for congregations on how to cope with the virus, including a 20-second prayer to recite during hand washing. 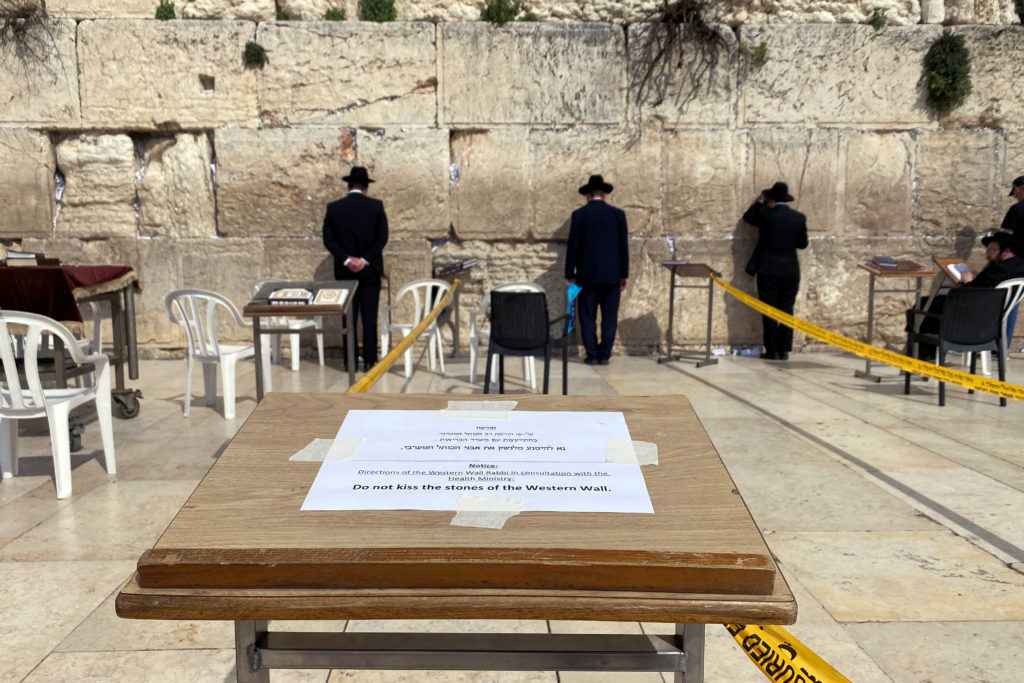 Ultra-Orthodox Jewish men pray in front of the Western Wall, Judaism’s holiest prayer site, in Jerusalem’s Old City, with a note advice not to kiss the stones of the Western Wall on display on March 16, 2020. Photo by REUTERS/ Ilan Rosenberg

In New Jersey, the Rabbinical Council of Bergen County, which represents 30 Orthodox synagogues, urged community members to practice social distancing. Shuls, or synagogues, in the area closed their doors March 13. “It is with a very heavy heart that we are suspending so many of the most crucial routines of our daily lives,” the council wrote. “We do this only because of the compelling nature of our circumstance and the decisive medical testimonies that are consistent with CDC recommendations.”

Muslim, Christian and Jewish faith leaders alike worry about the future of worship as Ramadan, Passover and Easter approach. But back in Washington, Volmer is advising the Christ Church congregation not to panic in these uncertain times.

“Having a little bit of extra wine on hand never hurts,” Volmer said.