While Carla SimsKayotuk was getting ready for work last year in one of the U.S. Arctic’s northernmost villages, she noticed her door wasn’t shut all the way. She scrunched her head down as she opened it slowly and peeked outside.

“And what do I see? Two huge eyes staring at me. It was a baby polar bear cub,” SimsKayotuk recalled. “My eyes got huge and his eyes got huge. I slammed my door shut.”

Fossil fuels and deforestation have pushed global temperatures up by nearly 2°F since the 1800s, and the Arctic is warming faster than anywhere else, pushing polar bears onto natives’ door steps. As sea ice retreats past the shallow continental shelf in the Beaufort Sea off north Alaska into waters that can be too deep for foraging, increasing numbers of polar bears are finding land on the coast. If they’re hungry or curious enough, they roam into arctic villages.

Warmer temperatures have also melted locals’ traditional permafrost freezers that they have relied on for more than 100 years to store subsistence whale meat, called muktuk, after their hunts — leaving them vulnerable to hungry bear raids.

While images of malnourished polar bears have become a national symbol of the effects of climate change, they are a front line reality for Alaska Natives, who face them on their own property and do not want them to get hurt.

SimsKayotuk would occasionally see a polar bear near her small village of Kaktovik as a child, but never one at her door -– a sign they are getting bolder.

“Now we have like 40 bears that are hanging around our area,” she said. “You always have to look out when you step out of your house.”

Since she cannot control the climate, she is testing a costly, designer, bear-resistant storage container, which she hopes can replace the permafrost ones and teach the bears that there is nothing for them in the villages. 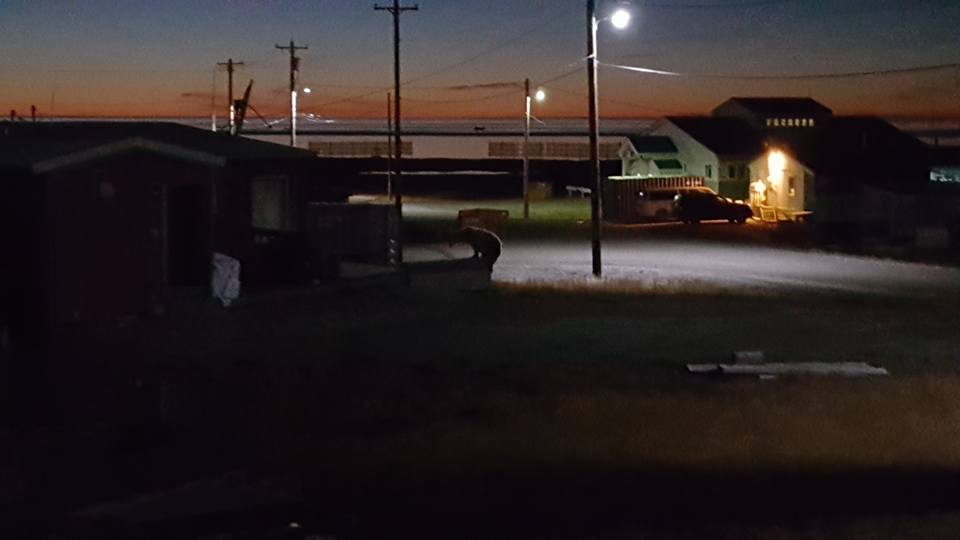 A polar bear tries to get into a food storage container. Photo by Lucy Soplu

“With the influx of polar bears coming into town, it’s hard to keep [muktuk] safe because that just became an attractor,” she said.

Locals and wildlife activists know that more interactions increase the potential that someone or one of the bears will get hurt. So there are two efforts underway to help them properly store food.

Last fall, the nonprofit Defenders of Wildlife shipped to Kaktovik four stainless steel food containers designed by a specialist in Oregon. They are six feet long and cost $10,000 each — half for the design and the other half for shipping. SimsKayotuk is one of the people testing the containers.

“They made it through the first winter and it looks like they’re doing really well into winter number two,” said Karla Dutton, the Alaska program director for the nonprofit. “I’d say I’m cautiously optimistic it was a success.”

Dutton said she is applying for grants and asking donors to help pay for more because, “I think everyone will need to find an alternative to their ice cellars.” 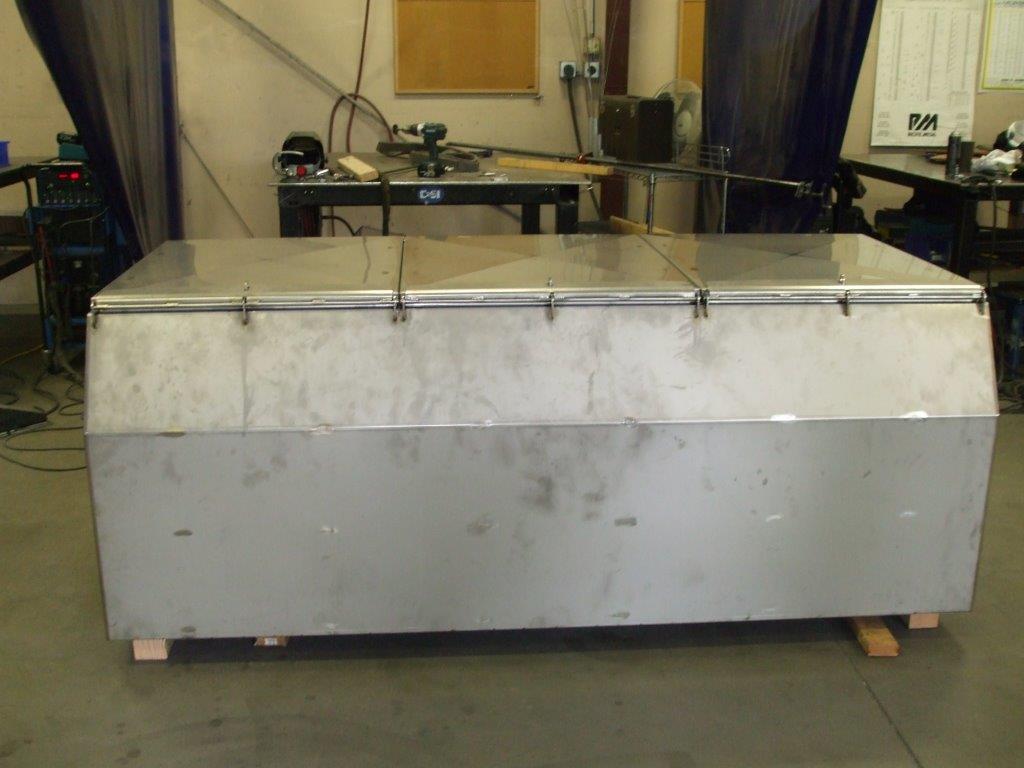 These designer food storage containers cost $5,000 to make and $5,000 to ship to the arctic. Photo courtesy of Defenders of Wildlife

The nonprofit Kaktovik Community Foundation is also two years into building an underground cellar that locals say might be ready for trial next winter.

Meanwhile, polar bears continue to be lured to the area by regularly-timed bone piles leftover from the bowhead whale hunts about a mile and a half away from town.

While this phenomenon has turned Kaktovik into a popular tourist spot, the bears are starting to show up earlier and stay later, as the open water season gets longer. If there isn’t any food, they might start wandering into town. 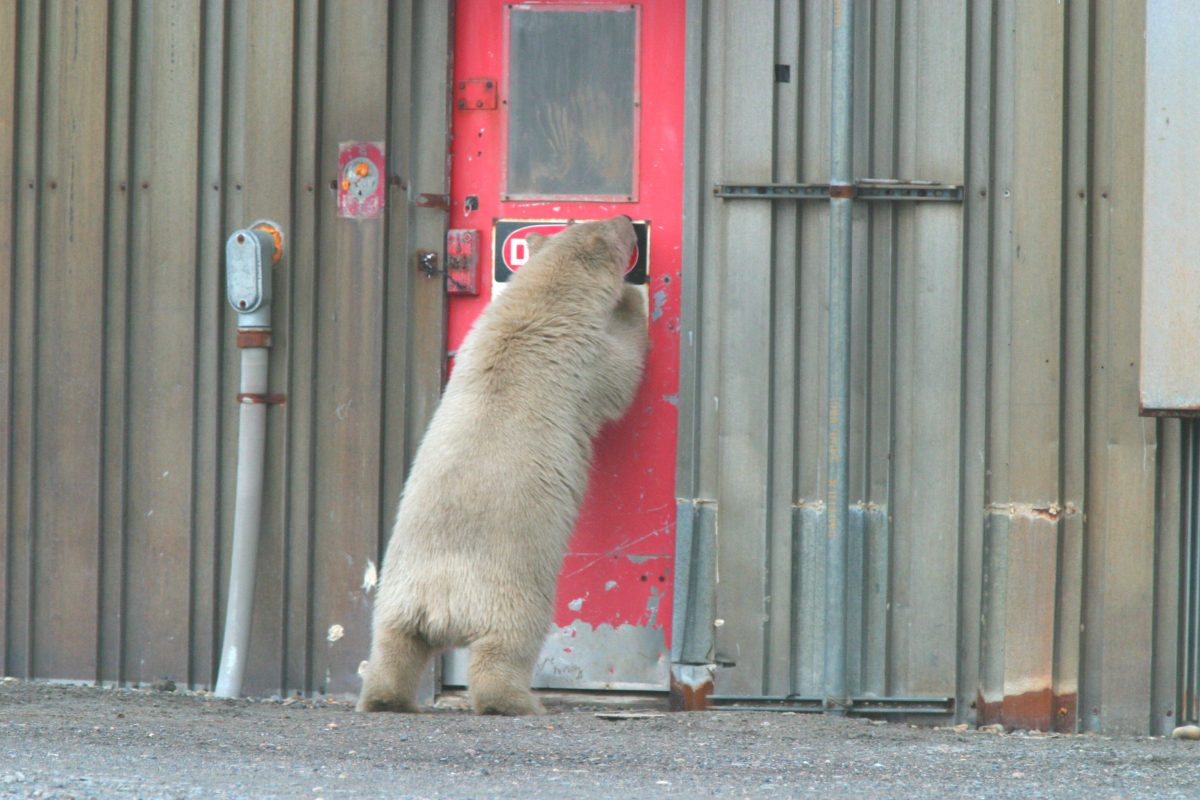 A young polar bear tries to get into a building in the U.S. Arctic. Photo courtesy of U.S. Fish and Wildlife Service

“There’s some evidence that shows that bears that are nutritionally stressed are more bold,” said scientist Todd Atwood, who researches polar bear behavior at the U.S. Geological Survey. “At the same time we’re seeing dramatic decreases in the sea ice … it’s not really part of their historical life history to spend extended periods of time on land.”

Atwood and other federal researchers recently found that polar bears that would usually live on ice in the southern Beaufort Sea are now three times as likely to come ashore as they were in the mid-1980s. Researchers also found that the Beaufort Sea population has rapidly dwindled from about 1,500 in 2006 to just over 900 in 2010 while the body mass of the average female has decreased by about 66 pounds, or about 7 percent, he said. 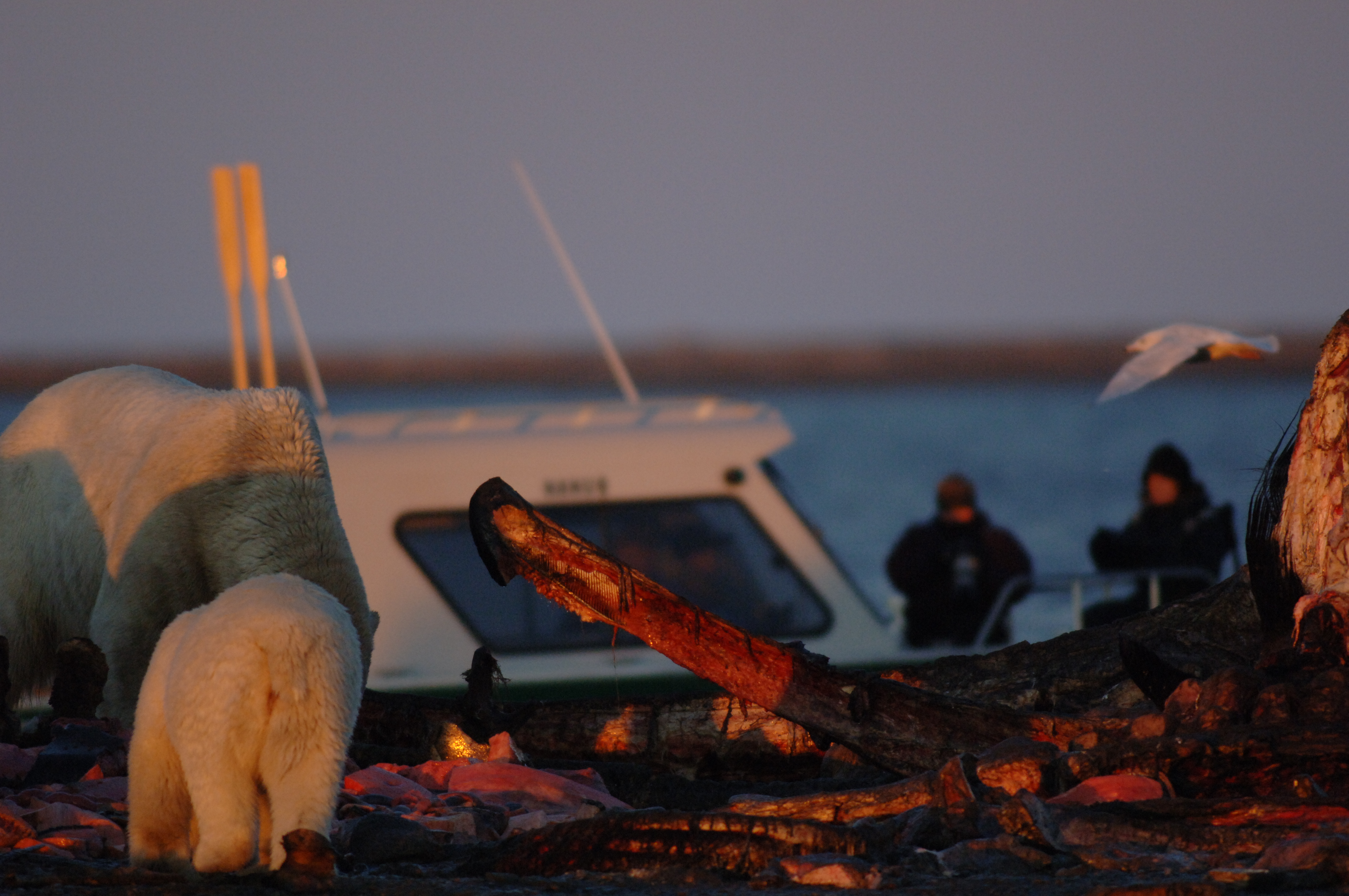 Polar bears feed off a bone pile in the U.S. Arctic with tourists in the background. Photo courtesy of the U.S. Fish and Wildlife Service.

After SimsKayotuk slammed the door on the cub, she called her husband, 911 and the village’s Polar Bear Patrol – except she is on the Polar Bear Patrol, the team tasked with scaring the bears away from town with cars, quads, noise and beanbag guns.

Eventually the cub, which had a sibling and its mom with it, left. Her husband came home and no one was hurt. But these encounters could grow more hostile as the animals stay longer and get hungrier.

Dutton said there’s been an increased interest from the community for the storage containers.

Not anymore. SimsKayotuk said there’s only one working permafrost cellar that remains in their village of about 250 people.

“They have all just kind of filled up with water,” she said.

Left: Increasing numbers of polar bears are finding land on the coast of Alaska. Photo by Carla SimsKayotuk