Poll: Most Americans don’t want Oprah to run for president

Despite Seth Meyers’ Golden Globes joke about a 2020 Oprah Winfrey bid for the White House, and the rush of speculation that followed, most Americans said they don’t want to see the actress and television host campaign for president, according to a new poll from the PBS NewsHour, NPR and Marist.

But, if Winfrey were to run against President Donald Trump, half of registered voters would support her, the poll shows.

Speculation about a possible run by Winfrey, 63, the iconic television host, philanthropist and actress who has built a widely popular media empire, erupted Sunday after she delivered an impassioned Golden Globes speech, calling for a world where women “become the leaders who take us to the time when nobody ever has to say ‘Me too’ again.” 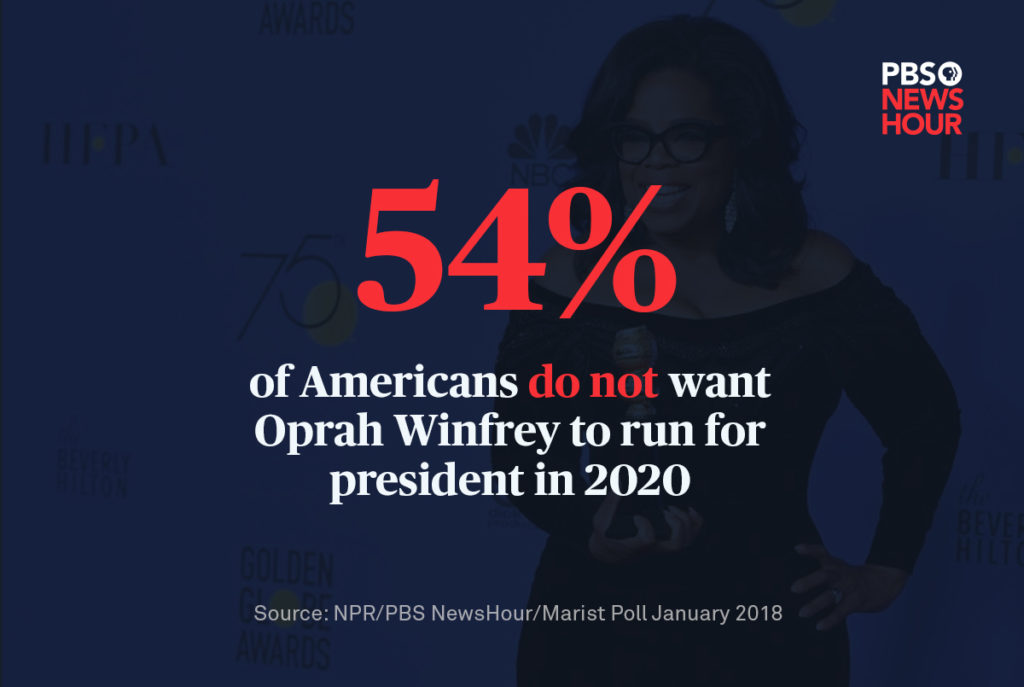 Winfrey’s remarks led to instant headlines suggesting she could be the Democratic Party’s best chance at regaining the White House. Winfrey hasn’t definitively said whether she will run for president, though her best friend and CBS This Morning host Gayle King said Winfrey is “intrigued by the idea.”

But does the general population think Winfrey should run for the nation’s highest public office? Not really.

A third of U.S. adults and registered voters alike said Winfrey should run in the 2020 presidential election. But more than half the country — 54 percent — said it wasn’t a good idea. And another 11 percent weren’t sure what Winfrey should do.

Lee Miringoff, who directs the Marist Institute for Public Opinion, said that based on these latest polls, the public seems to be saying, “We really like you and would vote for you, but do you really want to do this?”

Like Trump, Winfrey would enter the 2020 race without any prior political experience.

It remains unclear whether people “want another outsider or somebody who knows Washington and can maneuver around the halls of Congress,” said Barbara Carvalho, director of Marist Poll.

When you cut those polling results along political lines, there wasn’t clear consensus on a Winfrey presidential bid. Democrats were split — 47 percent said yes, Winfrey should run, and 40 percent said no. Meanwhile, 77 percent of Republicans rejected the idea of Winfrey’s presidential candidacy. Support among independent voters reflected national figures.

Still, if the 2020 presidential election were held today, with Winfrey as the Democratic nominee and Mr. Trump as the Republican incumbent, 50 percent of U.S voters would choose Winfrey. More than a third of registered voters — 39 percent — said they would back the president, a figure that reflects his November job approval numbers from Marist. And 11 percent of registered voters said they had no idea what they would do. 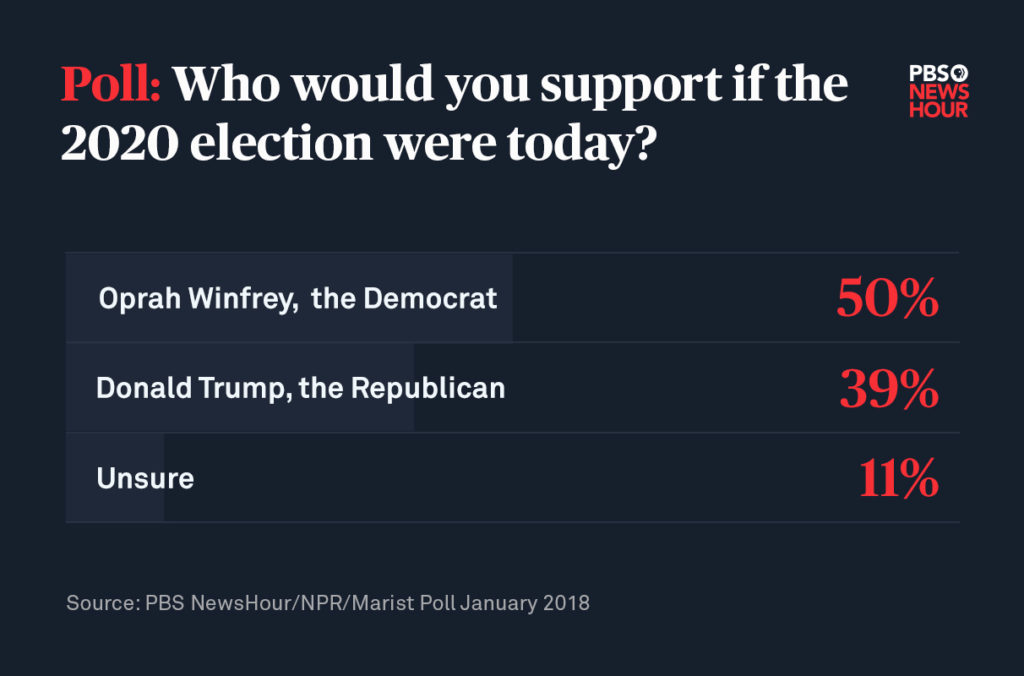 Two-thirds of U.S. adults said they hold a favorable impression of Winfrey, compared to slightly more than one-third of Americans who reported a good impression of Trump in November.

Sarah Parker, a 70-year-old Democrat from Chesapeake, Virginia, who has voted in every presidential election since she was 18, said Winfrey would better serve the nation as a public citizen than in public office.

Parker, who has five grandsons and keeps a pocket-sized copy of the Constitution in her purse, thinks Winfrey is overqualified. She said while other celebrities have served in the Oval Office, including former actor and President Ronald Reagan, “it’s a plus if they have some political experience or some military experience because you understand how the government works,” Parker said. “[Trump] doesn’t understand it.”

But if Winfrey was nominated by the Democratic Party, Parker, who is African-American, would support her.

If Donna Breckenridge, a lifelong white Republican from Oak Forest, Illinois, were in the ballot box today, said she would vote for Winfrey without any qualms.

In 2016, Breckenridge, 71, burst into tears after she voted for Hillary Clinton, the first time she ever failed to back a Republican. She couldn’t bring herself to vote for Trump, she said. Breckenridge said Winfrey “doesn’t have the experience to run the country,” but said she’d feel confident about her cabinet picks. “She would know best who to choose to help her. I trust her.”

Two-thirds of U.S. adults said they hold a favorable impression of Winfrey, compared to slightly more than one-third of Americans who reported a good impression of Trump in November.

Breckenridge doesn’t feel the same way about Trump, who she says is too “thin-skinned.”

“I’m used to having respect for that office, and I just don’t” under Trump, she said.

If 54-year-old Norm Strickland had to choose today between Winfrey and Trump, he’d vote for the president one more time, but that’s because he doesn’t know enough about the television star, he said.

Strickland, who is white, identifies as politically independent and cast his ballot for Barack Obama in 2008 and Mitt Romney in 2012. He said the tone of political discourse in this country must change. While the commercial real estate appraiser in Mohler, Washington, said he is impressed with Winfrey’s success in business and philanthropy, “a campaign is a necessary function for me to get to know a candidate, and everybody will have to go through that process.”

“Ms. Winfrey has not run for office, so we don’t know her that well,” he said.

Left: Despite a Golden Globes joke about Oprah Winfrey's run for president, most Americans do not want the star, seen here at the awards ceremony, to run for president, according to a new poll. Paul Drinkwater/Courtesy of NBC/Handout via REUTERS