Hundreds of right-wing protesters and counter-protesters faced off in Portland, Oregon on Saturday, shouting chants like, “USA, USA,” and “Whose streets? Our streets!” at each other across a barrier of police in riot gear.

The permit-less rally was organized by Patriot Prayer, a far-right group founded by Joey Gibson, who is running for U.S. Senate in Washington. In response, leftist Portland-area groups planned a counter-protest rally to start at City Hall and march towards the waterfront, where the Patriot Prayer rally took place.

“We’re here to teach a lesson to the entire country,” said Gibson to a crowd of supporters, minutes before the planned march. “Do not break the line – they will come to us. Go slow and keep tight.”

Many in helmets and riot gear of their own, the far-right groups began their march along the river at around 1:30 p.m. local time, after Gibson quickly took the mic to offer a prayer to the crowd. Anti-fascist protesters followed on the other side of the street, while police jogged to stay in between the two.

That’s when the announcements began. “This is the Portland police bureau. Remain on the sidewalk, get out of the street.” At 2:30 p.m. local time, Portland police were ordering crowds to disperse via loudspeaker.

Earlier in the week, Portland police and city officials voiced concerns about opposing protests between far-right groups and anti-fascist counter-protesters planned in the city today.

“Chief Outlaw and I have serious concerns about the potential for violence at this weekend’s demonstrations,” Portland Mayor Ted Wheeler said in a statement Friday.

“It is particularly troubling to me that individuals are posting publicly their intent to act out violently,” he said. “We don’t want this here.” 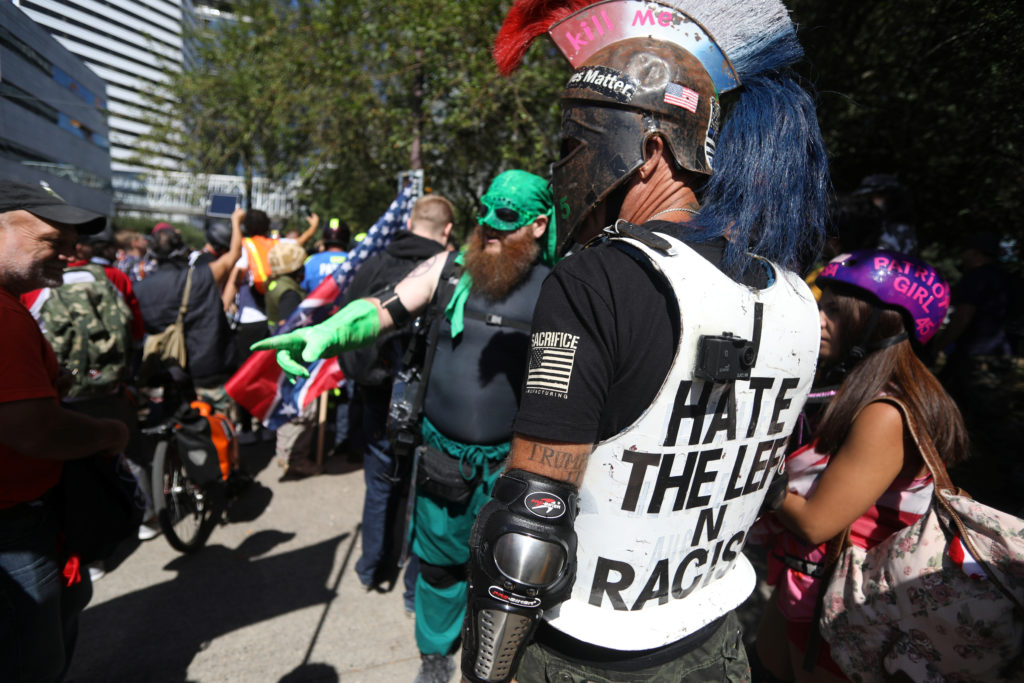 Members of the right-wing Patriot Prayer group gather before a rally in Portland, Oregon, U.S. August 4, 2018. Photo by Jim Urquhart/Reuters

The rally is the latest in a series of events organized by Gibson and extremist right-wing organizations to promote “free speech” while provoking clashes with anti-fascist and anti-racist counter-protesters.

The rally takes place about a month after a confrontation between Patriot Prayer and anti-fascist protesters in Portland on June 30 turned violent, causing police to revoke the event permit and declare a riot.

“I cannot think of one rally when we didn’t have guns with us,” Gibson said. “Everywhere we go, we have guns.”

The Facebook event warned marchers not to wear anything that identifies them as affiliated with Patriot Prayer. 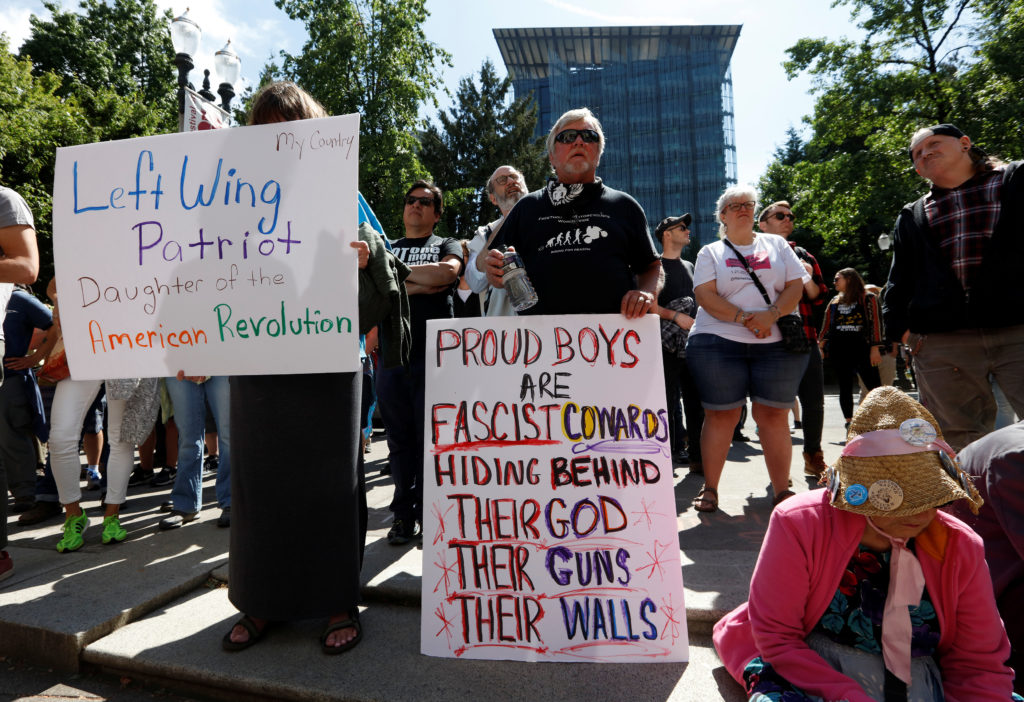 Protestors gather before a rally by the right-wing Patriot Prayer group in Portland, Oregon, U.S., August 4, 2018. Photo by Bob Strong/Reuters 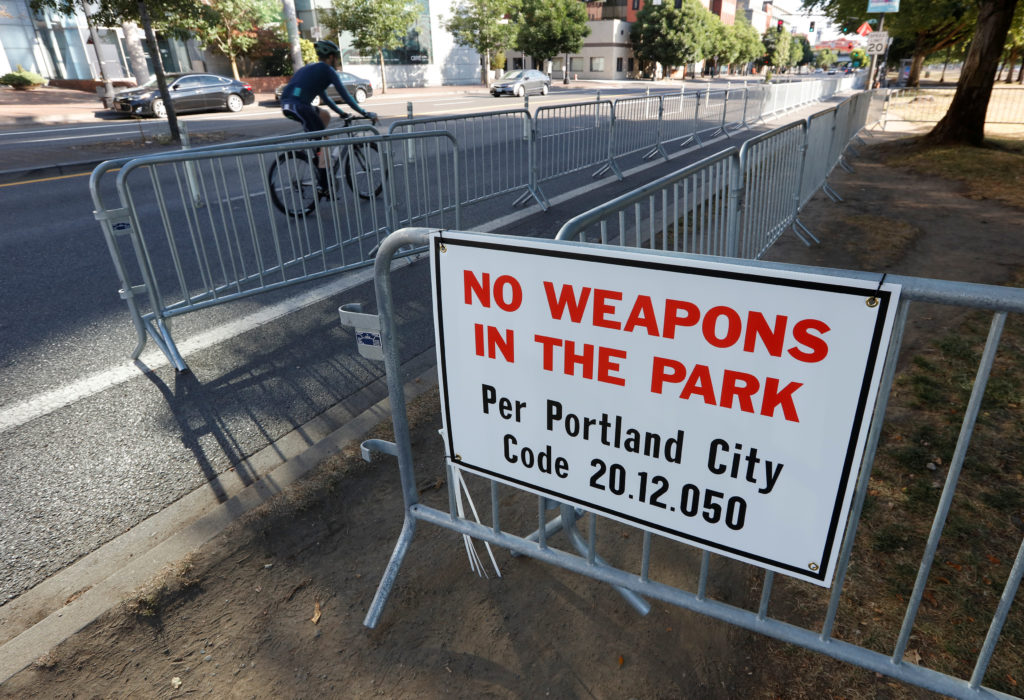 A ‘No Weapons’ sign is seen at a park where right-wing Patriot Prayer group plan to hold a rally in Portland, Oregon, on August 4, 2018. Photo by Bob Strong/Reuters

“There will be a significant law enforcement presence in the area of the demonstration due to past threats and acts of violence,” the Portland Police Department said in a statement. There will be weapon screening stations set up around Tom McCall Waterfront Park and “prohibited items may be temporarily or permanently seized,” police said.

Several leftist activist groups organized the “Resist Patriot Prayer” march. The Facebook event description states, “We make no apologies for the use of force in keeping our communities safe from the scourge of right-wing violence.”

Wheeler said he can only regulate, not stop, the rally. “A demonstration cannot be preemptively banned based on the occurrences at a prior demonstration,” he said in a statement. “I have been an active participant in a national discussion about how to balance the right to free speech with the responsibilities that come with that right.”