The stay, issued by federal Judge Ann Donnelly in Brooklyn late Saturday, prevents the government from deporting immigrants who are currently being detained at U.S. airports. The ACLU estimated there were 100 to 200 people detained at airports across the country on Saturday, blocked from entering the country by the executive order.

The ACLU filed a complaint on behalf of two Iraqi citizens, Hameed Khalid Darweesh and Haider Sameer Abdulkhaleq Alshawi, who both were issued U.S. visas prior to Friday’s executive order and were held at the John F. Kennedy International Airport upon arrival to the U.S.

Darweesh worked in Iraq as an interpreter, engineer and contractor for the U.S. government between 2003 and 2013. He was released from the airport on Saturday afternoon. Alshawi was still being held there when the stay was granted. His wife and children are living in Houston, Texas, according to the complaint.

“Clearly the judge understood the possibility for irreparable harm to hundreds of immigrants and lawful visitors to this country. Our courts today worked as they should as bulwarks against government abuse or unconstitutional policies and orders,” ACLU executive director Anthony D. Romero said in a statement. “On week one, Donald Trump suffered his first loss in court.”

Hundreds of people congregated next to the federal courthouse in Brooklyn, as they awaited Judge Donnelly’s ruling on the stay. Loud cheers erupted as the court’s decision was announced.

The ruling followed a protest Saturday afternoon at JFK where hundreds of people crowded outside the airport to demonstrate, a crowd that grew throughout the afternoon.

Murad Awawdeh, director of political engagement for the advocacy group New York Immigration Coalition, told the NewsHour that he decided to issue a call-out on social media for protesters to meet at JFK’s Terminal 4 after the news first broke Friday night that at least two individuals were being held there.

By Saturday morning, reports said that 12 people were being held at JFK by federal authorities, though Awawdeh remained optimistic.

“Apparently it’s working because one person was already released,” Awawdeh said of the demonstration early Saturday afternoon, also noting that he was receiving updates from attorneys who were working to release the rest of the detainees. “When all the people get out we’ll leave.”

Protests against Trump’s executive order broke out on Saturday at airports across the country, including in Chicago, San Francisco, Dallas-Forth Worth and elsewhere.

The executive order, signed on Friday afternoon, banned all refugees and visa holders from seven countries from entering the U.S for 90 days and suspended the U.S. Refugee Admissions Program for 120 days. The order affects citizens of Iran, Iraq, Syria, Libya, Somalia, Sudan and Yemen. Syrian refugees, who have fled the war-torn country by the millions after a nearly six-year civil war, were banned for an indeterminate amount of time. 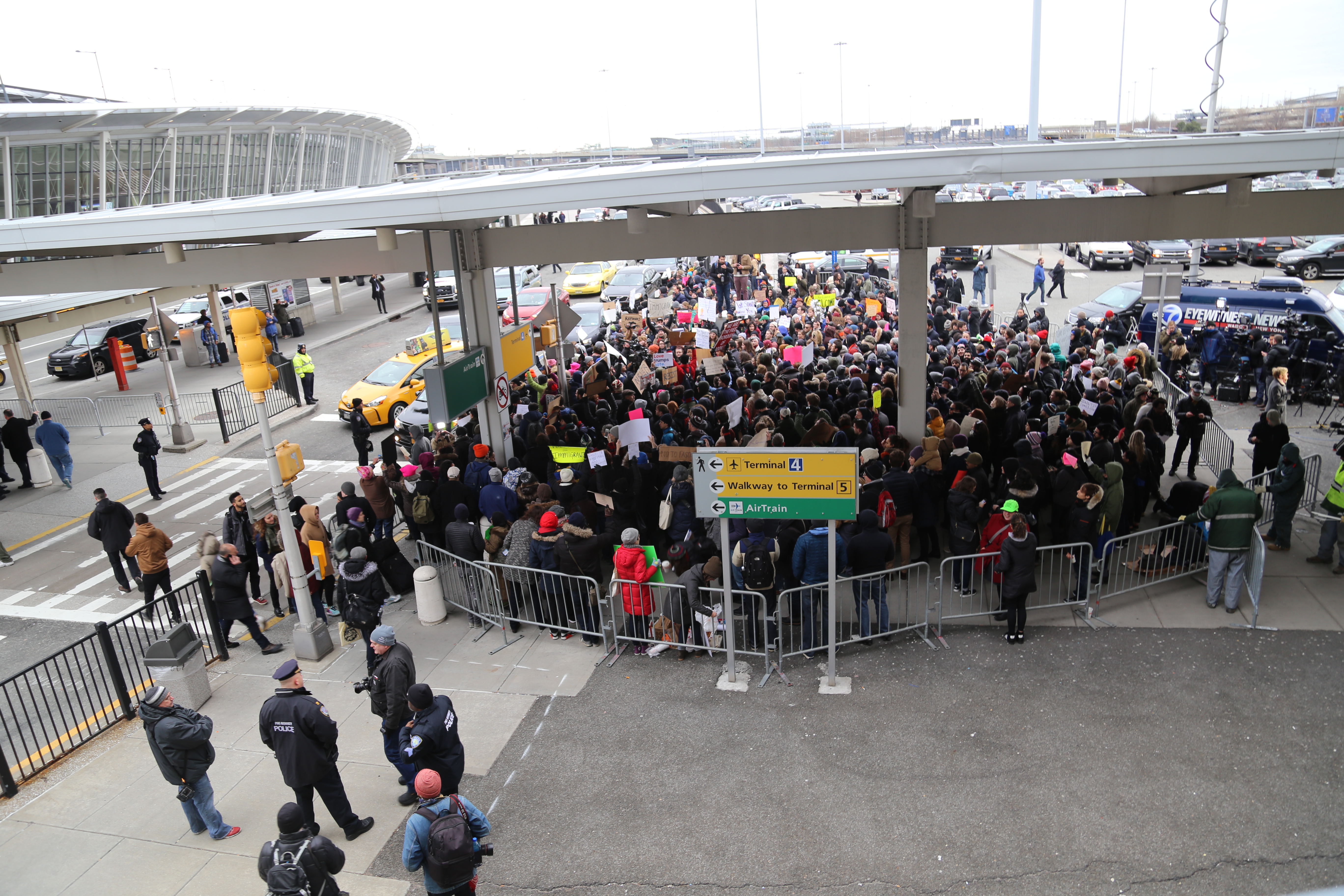 One Iraqi man who was detained was later given a waiver to enter the United States. Photo By Micheal D. Regan/PBS NewsHour

The demonstrators held signs and chanted slogans throughout the day. One of the protesters, Thomas Beard, 32, a curator living in New York City, said it was “the Muslim ban” that drew him out in frigid temperatures to demonstrate.

“It’s completely unconscionable and I wanted to add my voice to the dissent,” he said of the president’s executive order, also noting he attended inauguration protests and the Women’s March last week in Washington, D.C.

Amir Bar-Lav, a 44-year-old documentary filmmaker, was attending the demonstration with his wife and three children.

“Anyone who believes in the Constitution should be here,” he said. “I am the son of an immigrant. My kids are the great-grand children of refugees.”

Estelle Davis, 39, of New York City, said she decided to attend the demonstration because she believes in the ideals of the U.S. Constitution and was upset that some of the individuals who may be banned from entry into the U.S. had helped the U.S. military during the war in Iraq. 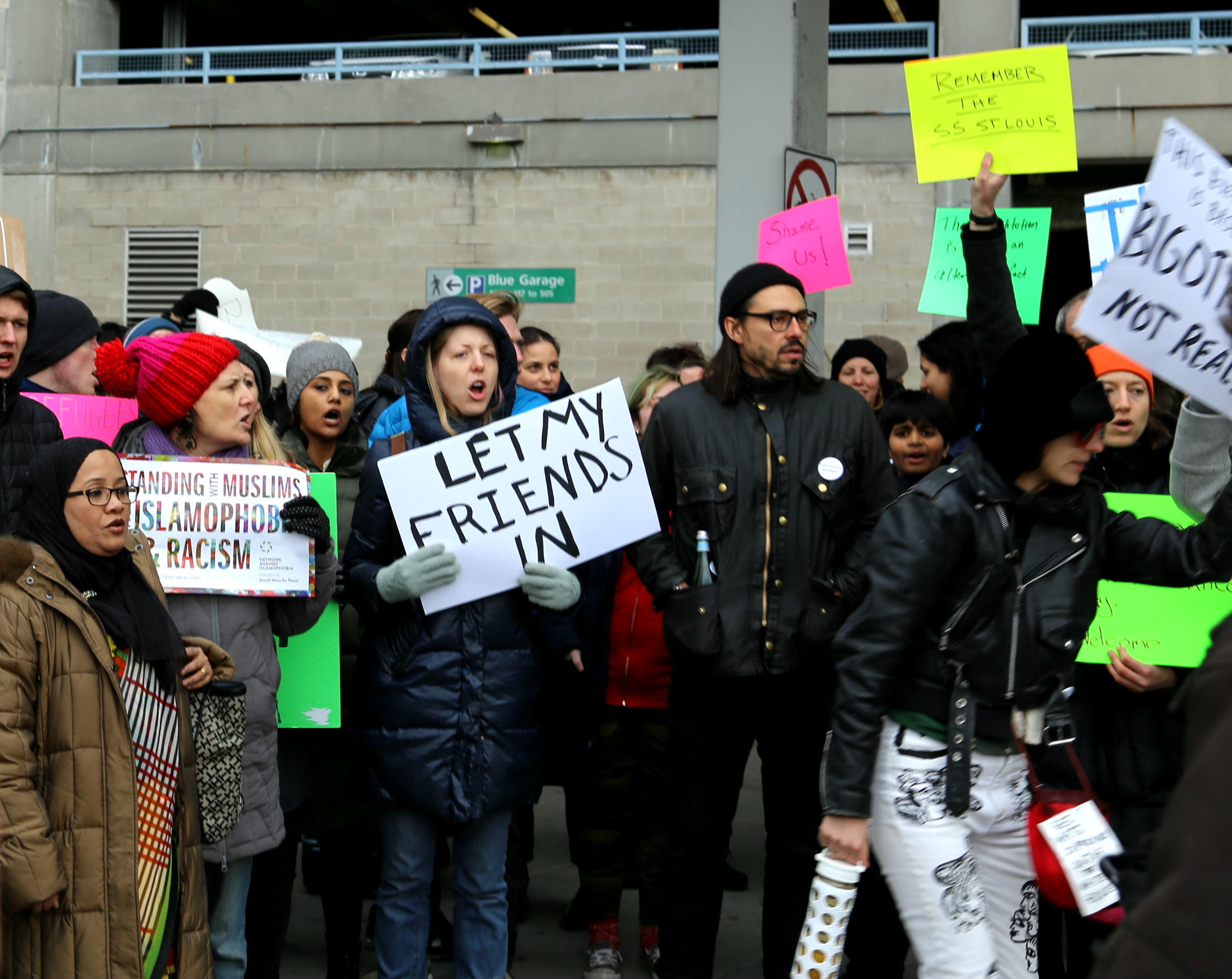 The protest began to grow after an immigrant advocacy group put a call-out for demonstrators on social media. Photo By Micheal D. Regan/PBS NewsHour

Emily Gadd, 45, who works in Manhattan, said the decision to ban immigrants and refugees from certain countries following a week of contentious decisions by Trump “has reached a level of absurdity.”

“We cannot shut our doors,” she said. “All of our elected officials know this is illegal. This is the essence of our country.”

Zak Foster, 36, a public school teacher in Brooklyn, said the parents of some of the students he teaches entered the country illegally and might be threatened by some of the policies Trump has proposed.

“What brought me here today is thinking about my students,” he said. “Some who are undocumented.”