Ricky Kidd, a 21-year-old man living in Kansas City, was charged with the murder of two men in 1996. Kidd couldn’t afford a lawyer, and so he was assigned a public defender named Teresa Anderson. In the second episode of Broken Justice, the PBS NewsHour podcast about the public defender system in Missouri, we learn how Kidd says the system “failed him” and led to his imprisonment.

From the beginning, Kidd told his public defender that he was innocent, and he knew who actually committed the crime he was charged with. But, he remained in jail, realizing that Anderson, the public defender assigned to him, did not have the time and resources to work on his case. Ricky’s experience wasn’t unique. Across Missouri, public defenders were overloaded.

During that time, Kidd wrote Anderson frequently — at least 19 times in his first six months in jail, begging her to do more. Anderson responded that she had other cases to work on and could not keep taking his calls.

Four months into his pretrial detention and frustrated with the lack of work, Kidd asked a judge to have her dismissed as his lawyer–the judge denied that motion. In 1997, Kidd was convicted of murder and sentenced to four life terms without the possibilty of parole.

Leading up to his trial, Kidd insisted on defending his innocence in his letters to Anderson. He expressed frustration with her work, and tried to provide strategies for his defense. These letters became exhibits in a 2009 habeas corpus hearing, which among other things, argued that Kidd suffered from ineffective assistance of counsel.

In this letter, Kidd had been in jail for two weeks, accused of the murders, and was assigned Teresa Anderson as his public defender. According to Kidd, Anderson advised him that it was her job to prove he was not guilty—not to prove who committed the murders. 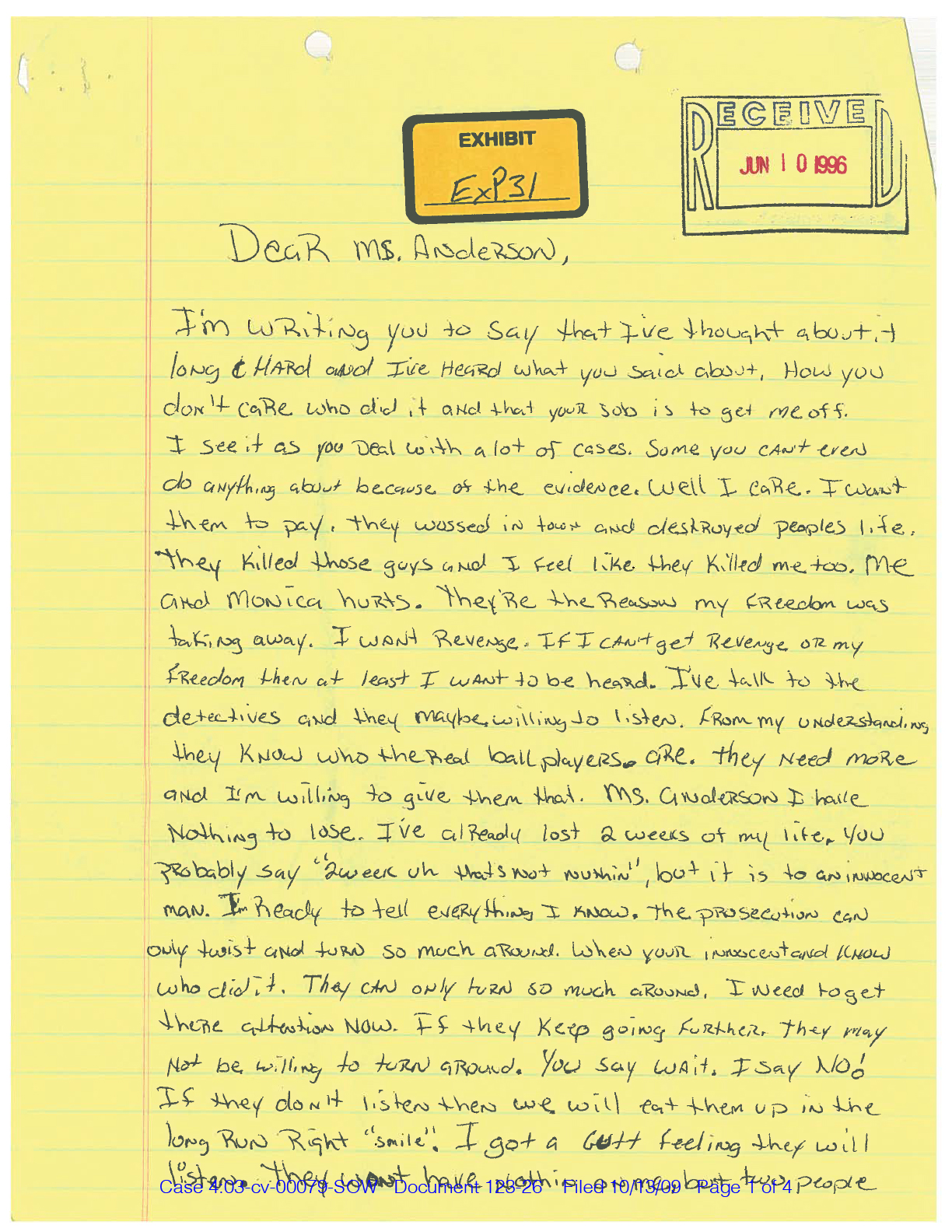 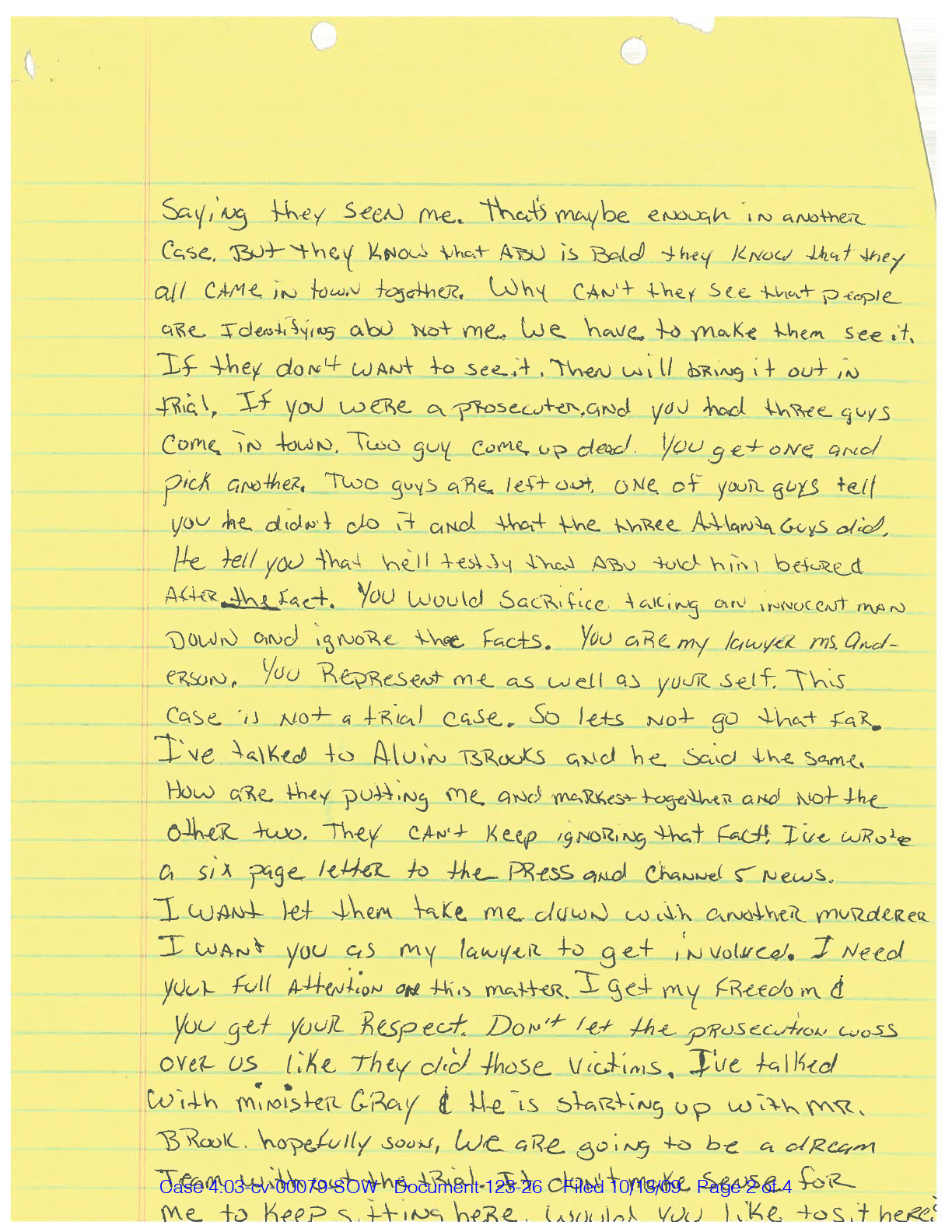 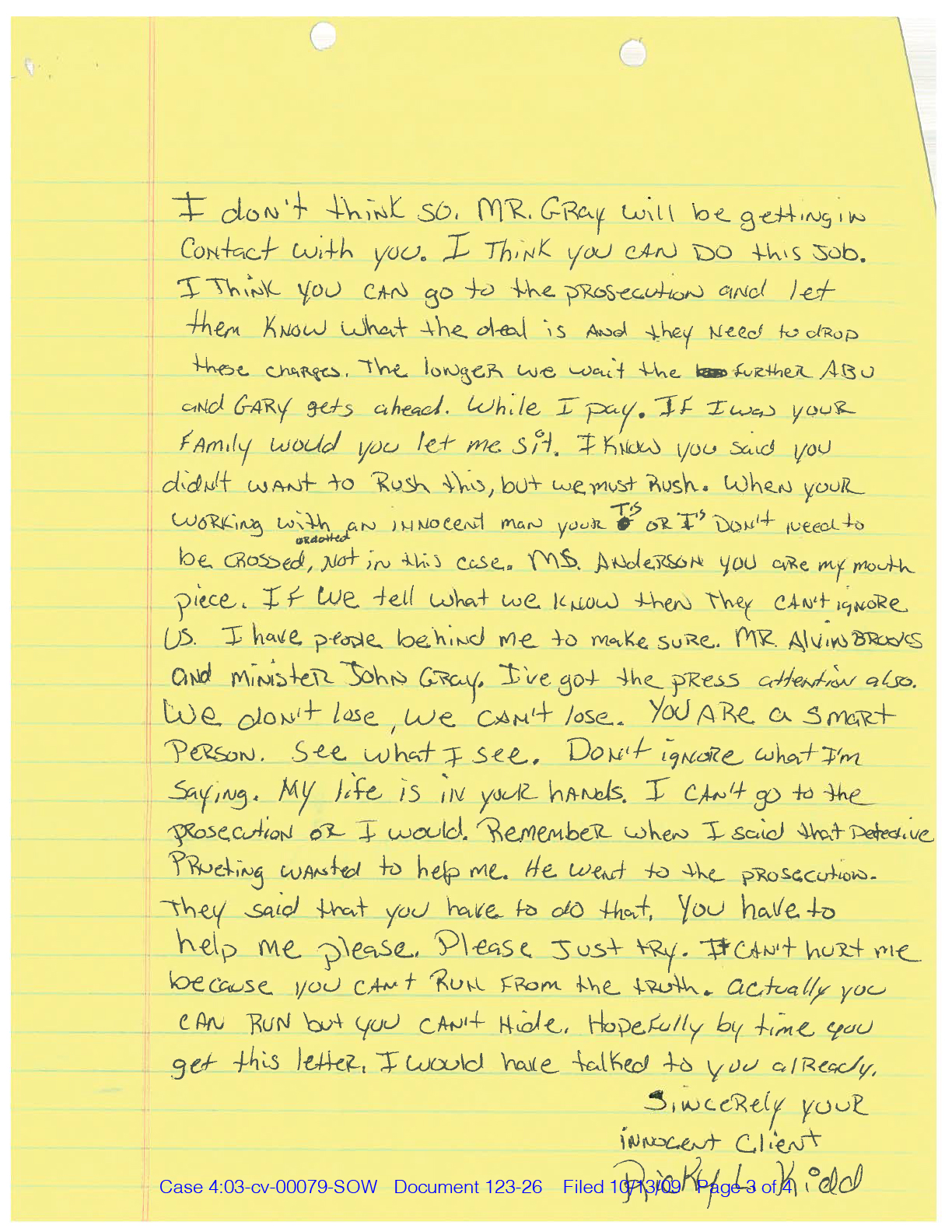 Anderson responded to Kidd immediately, highlighting another case she was working on, saying that Kidd was going to have to wait his turn. 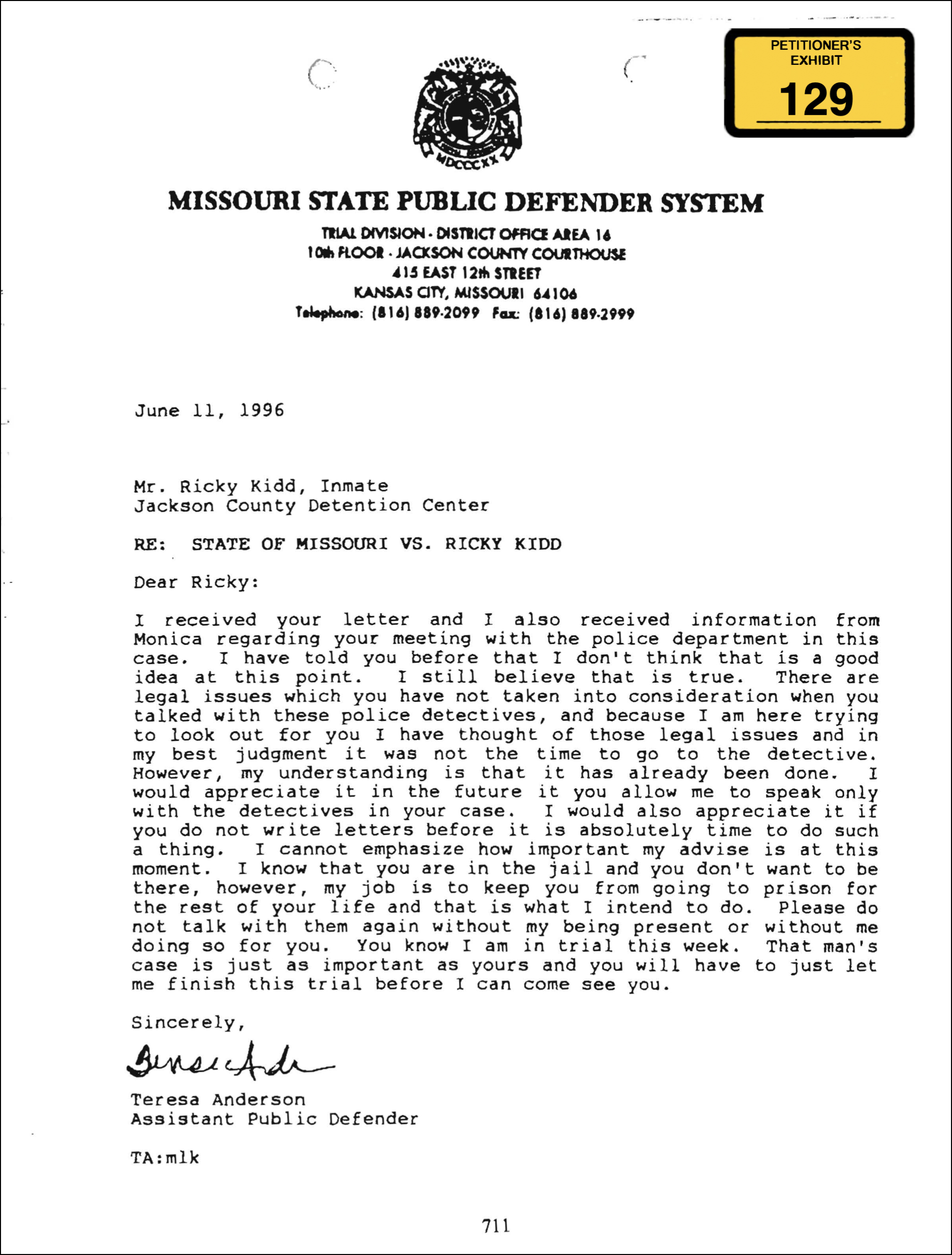 Three months after being charged, Kidd continued to express frustration at Anderson’s lack of progress in investigating his case and her lack of contact with him. 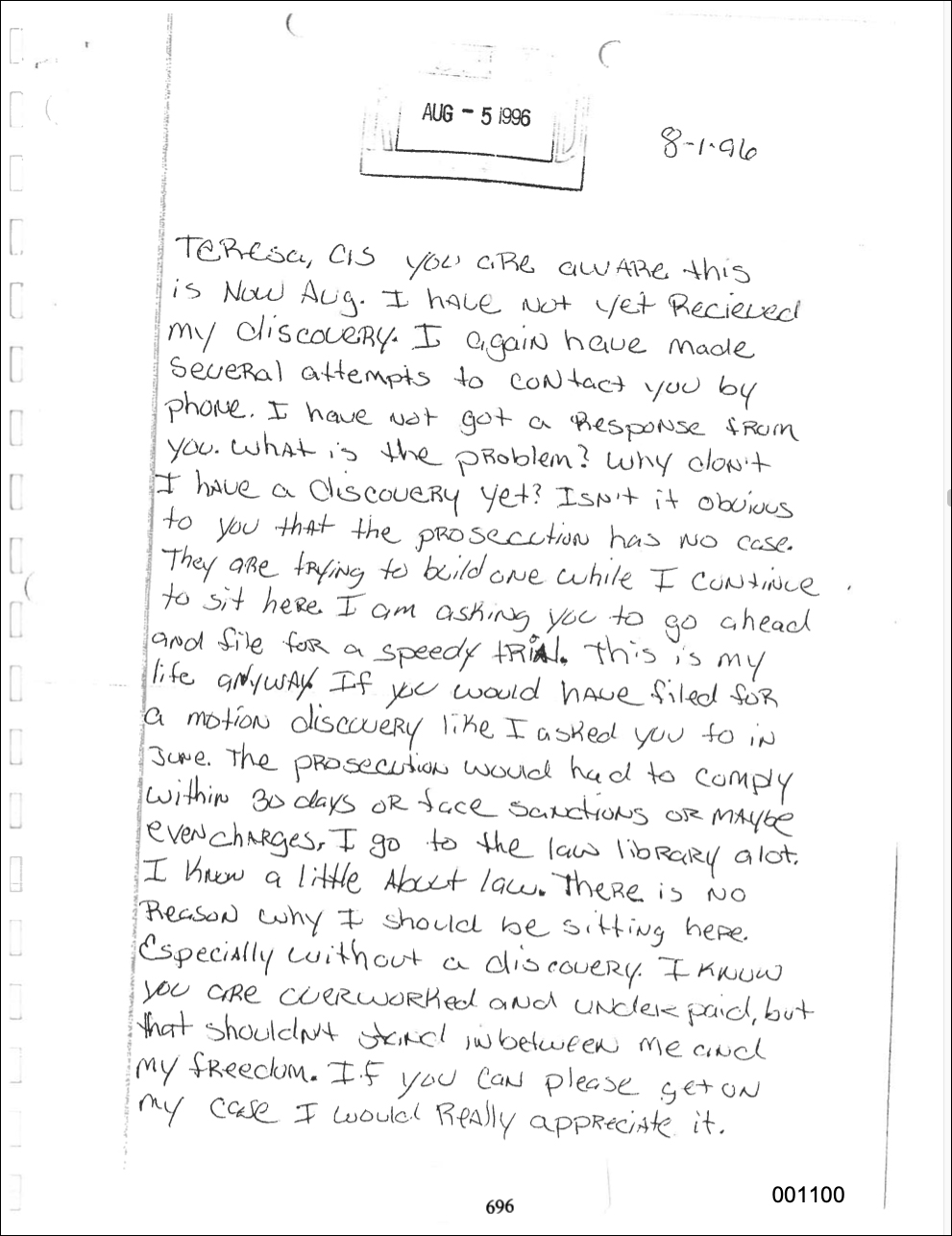 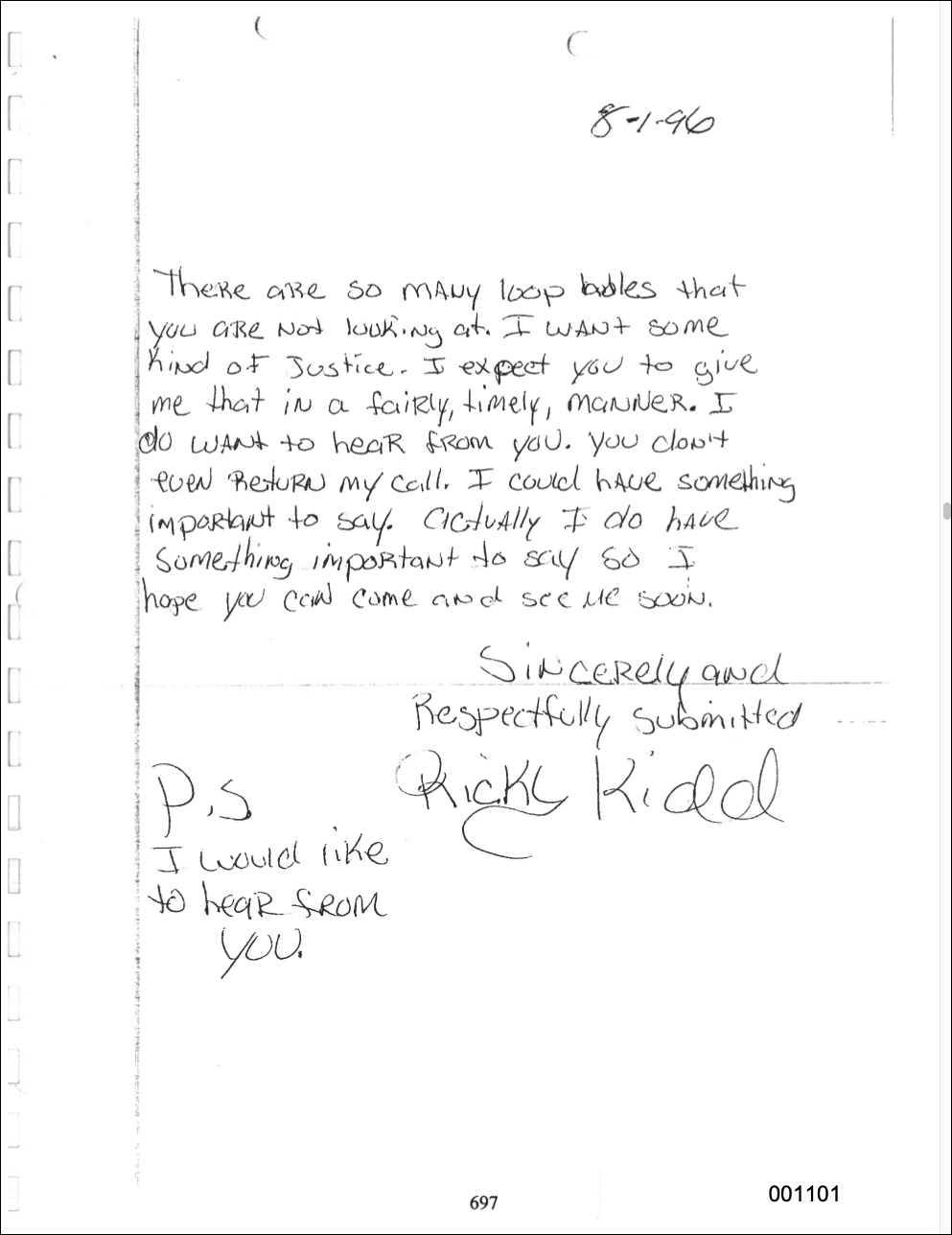 After receiving a phone call from someone claiming to speak on Kidd’s behalf, Anderson refused to speak with anyone who contacted her on his behalf – saying she would only speak with Kidd, his family members, and his girlfriend, Monica Gray. 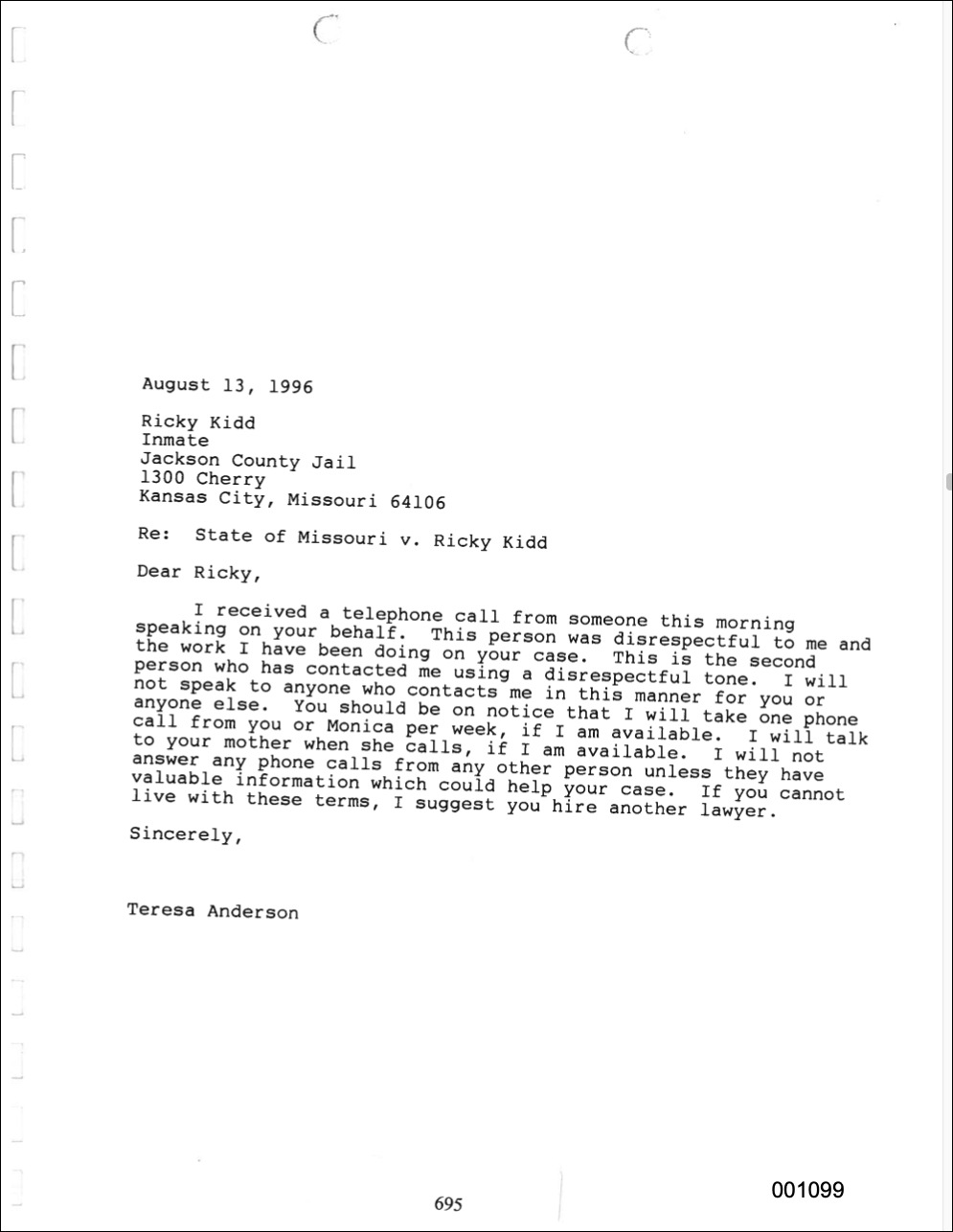 In September, Kidd filed a motion to dismiss Anderson as his public defender. A judge dismissed the motion that same day, and Anderson remained Kidd’s lawyer as he was tried for murder. 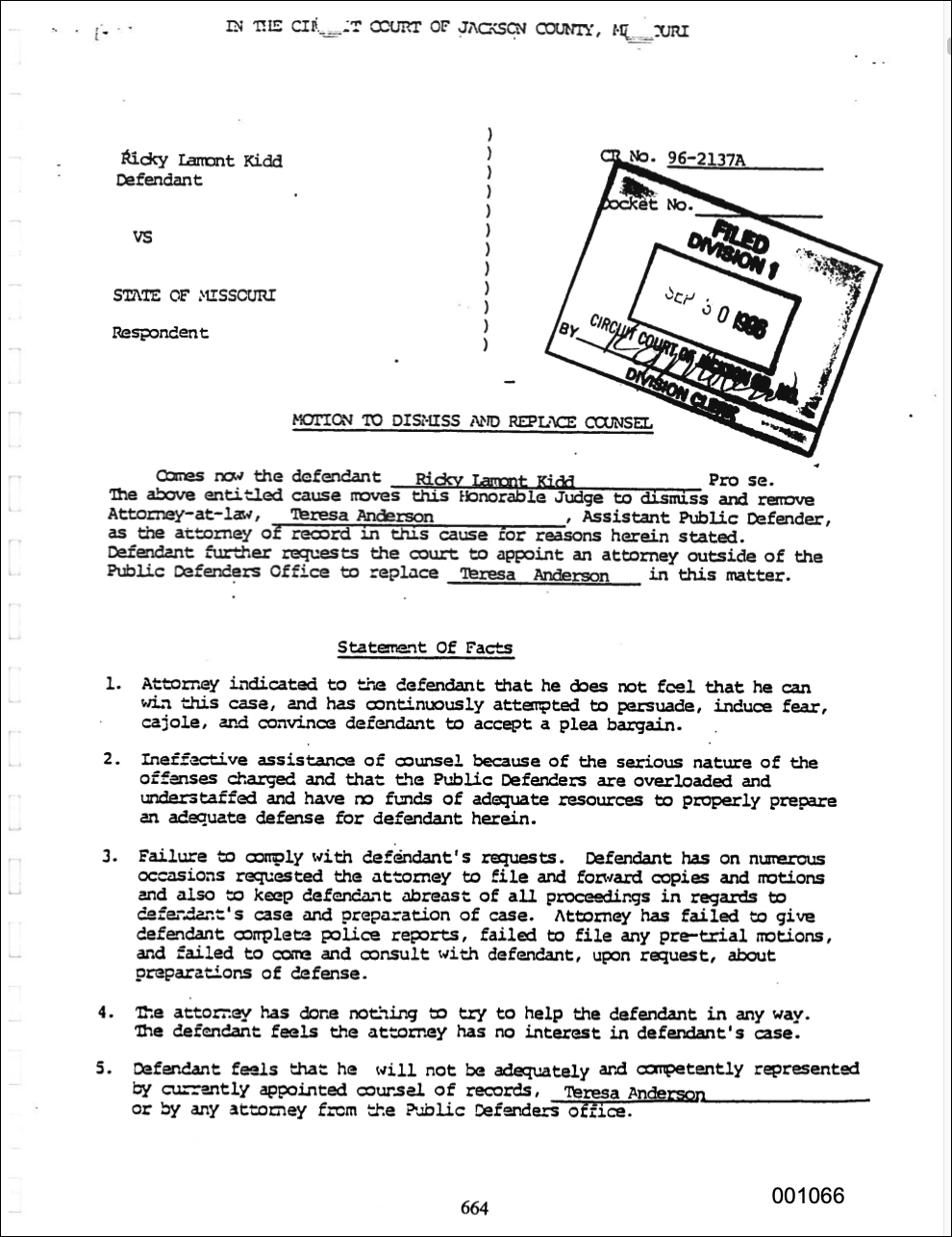 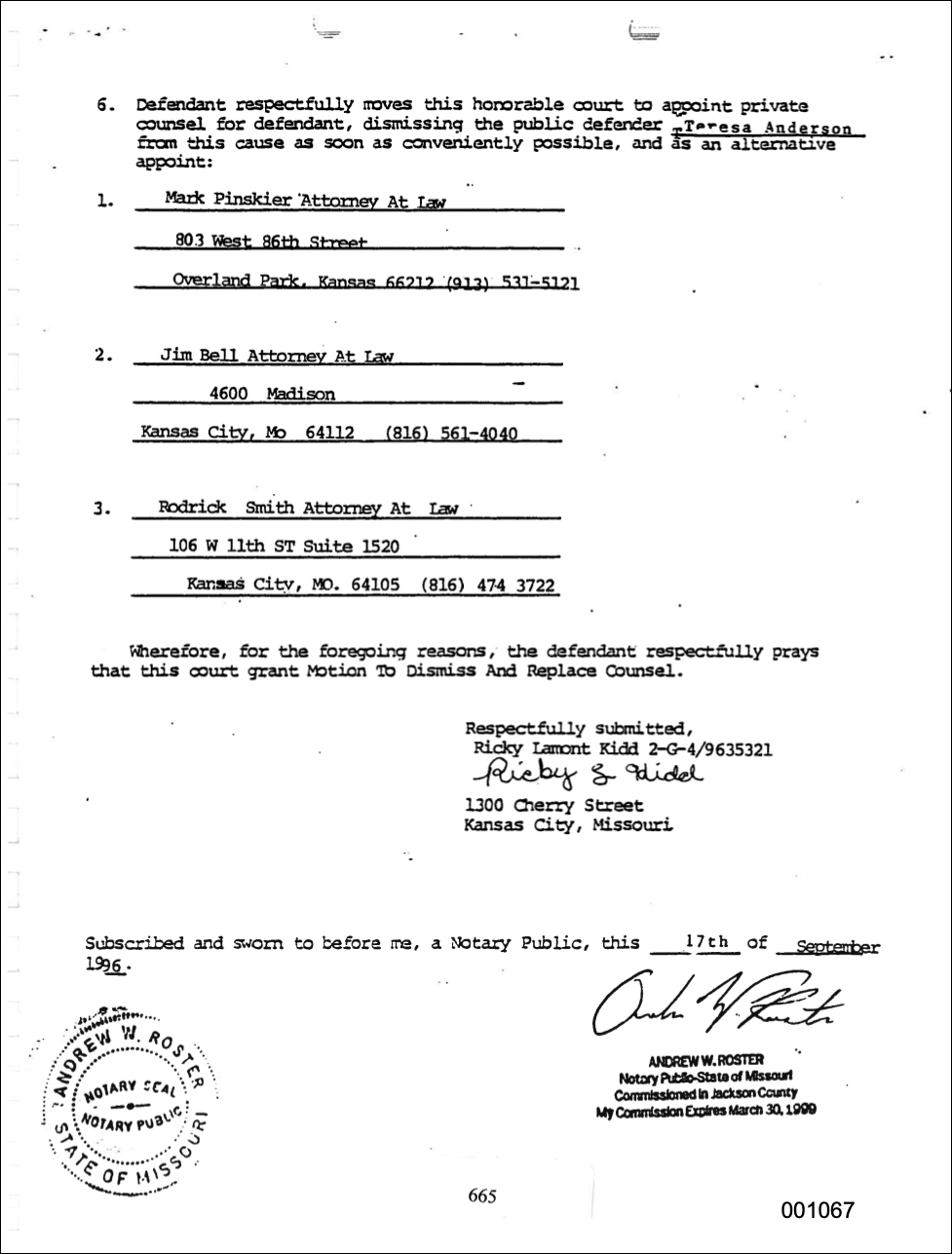 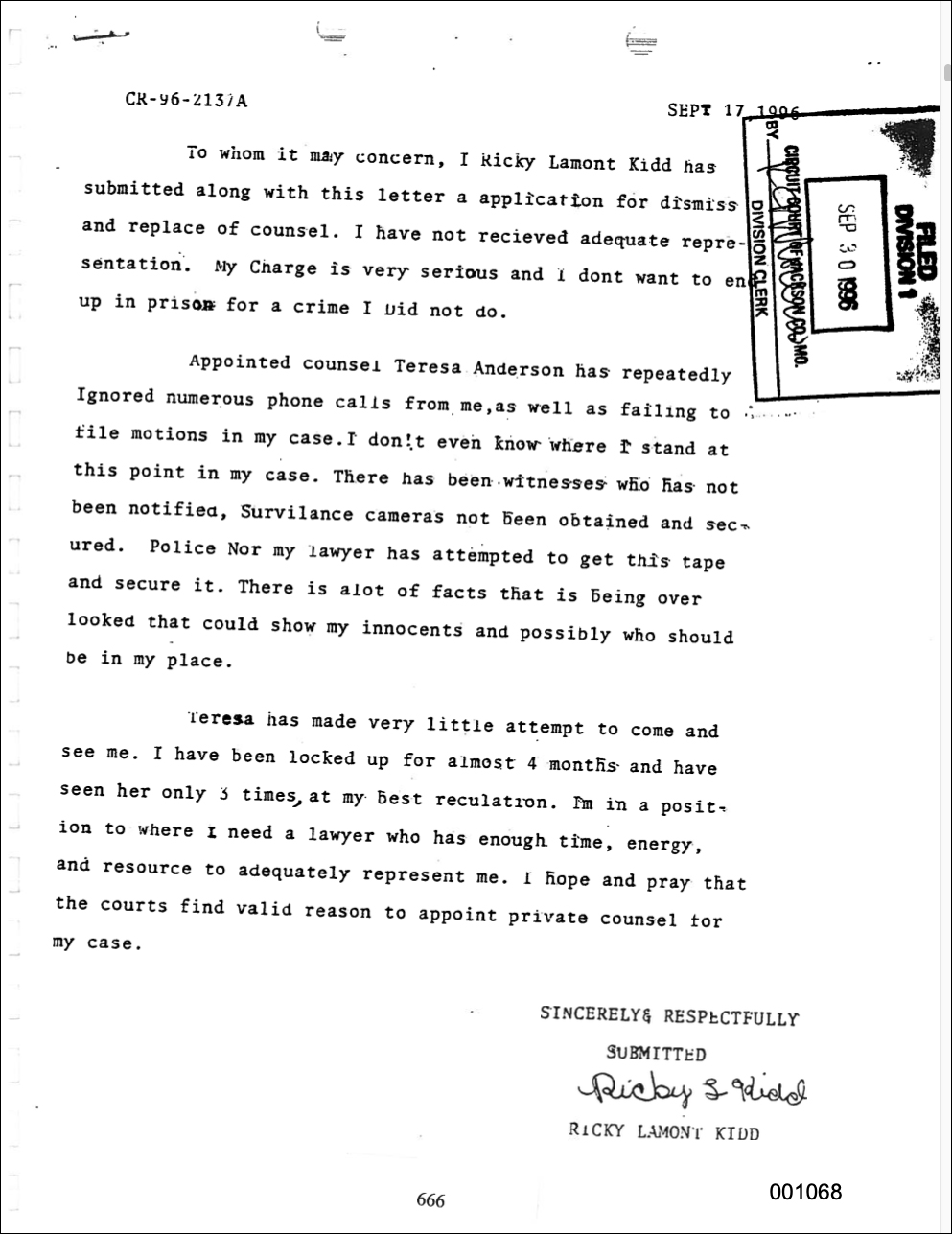 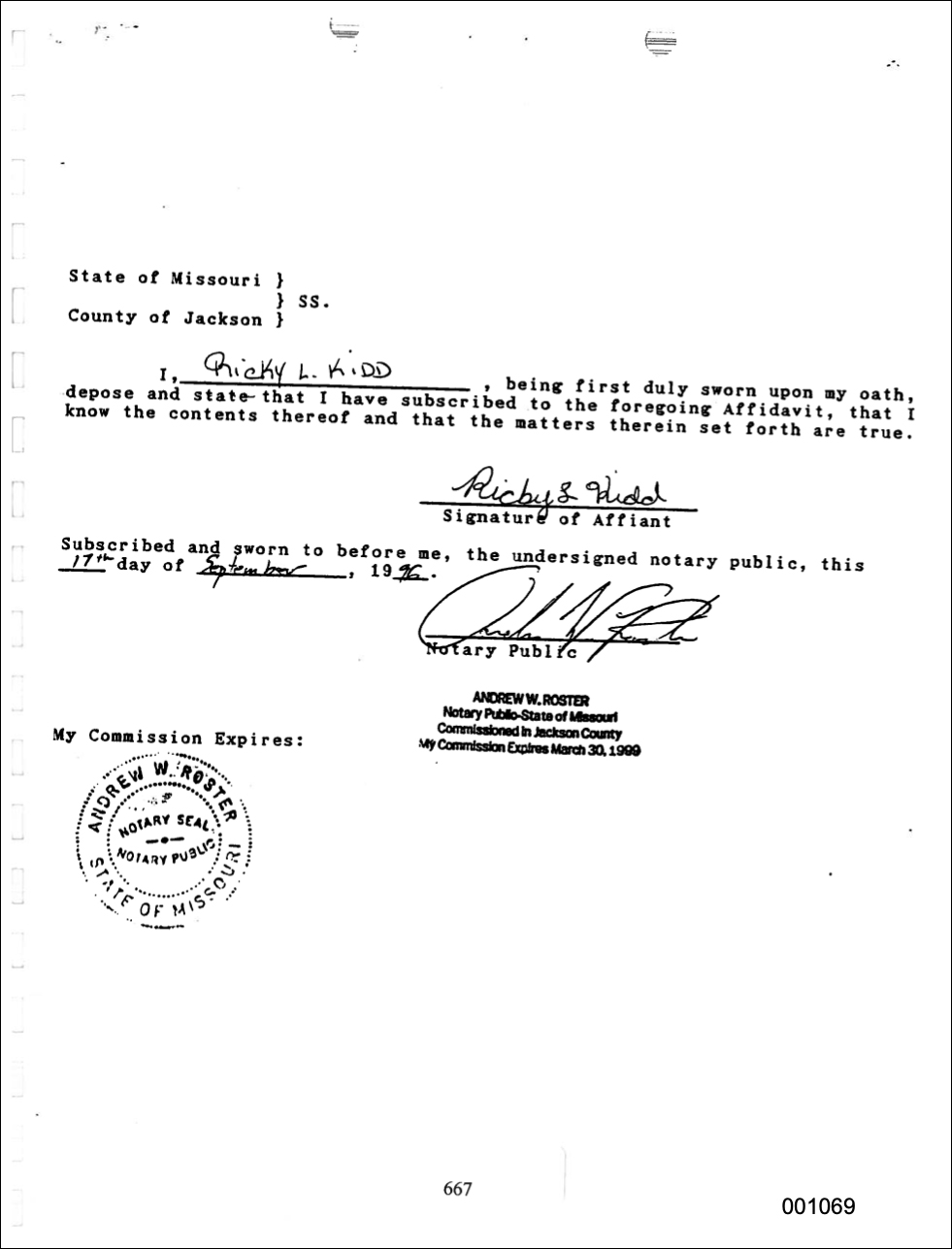 In November, Ricky wrote Anderson again, reiterating that he wanted to hear from her. He also let her know that his baby girl, Infiniti, was born in October, and that he hoped to spend Christmas with her. Ultimately, he missed that Christmas, and many others. 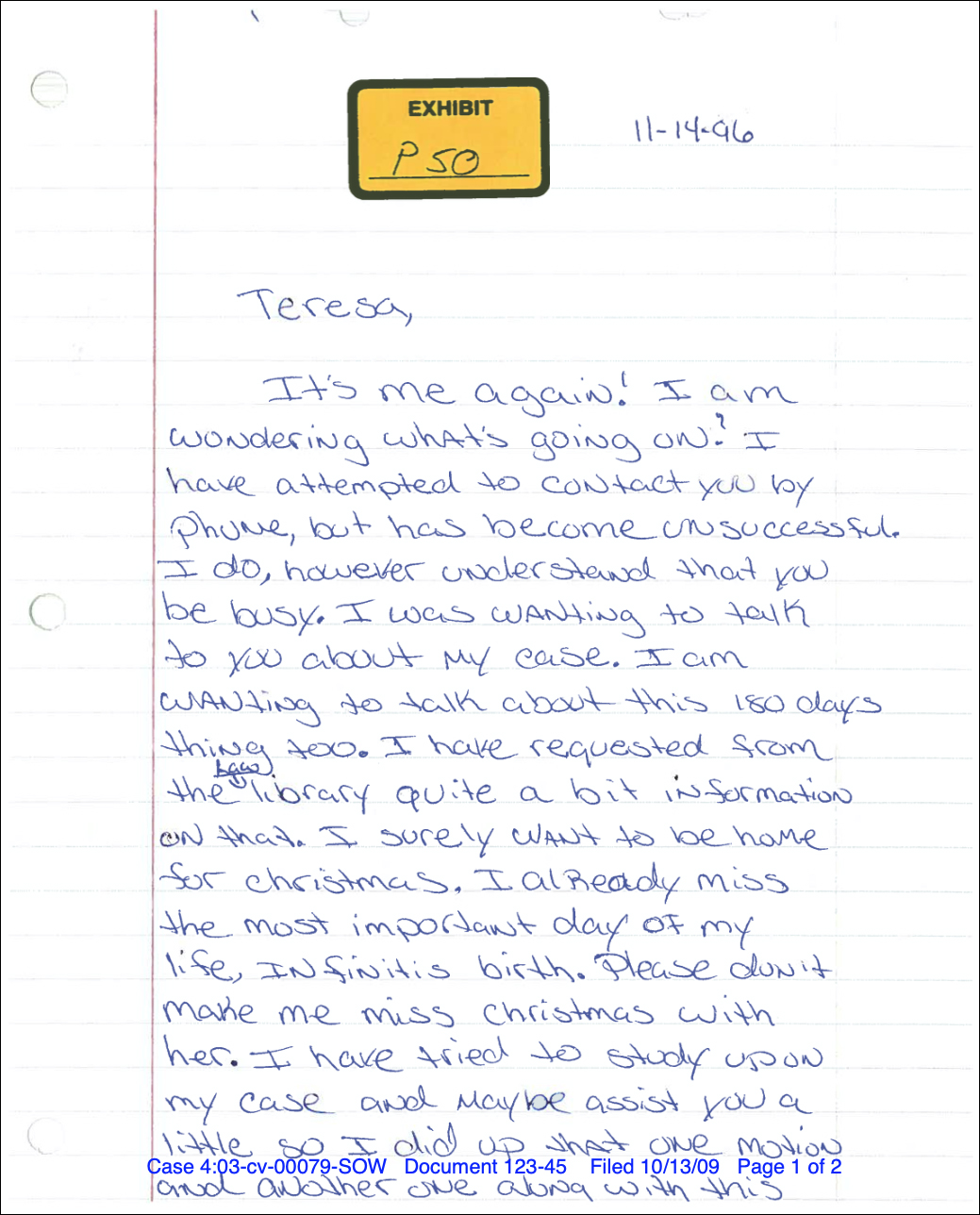 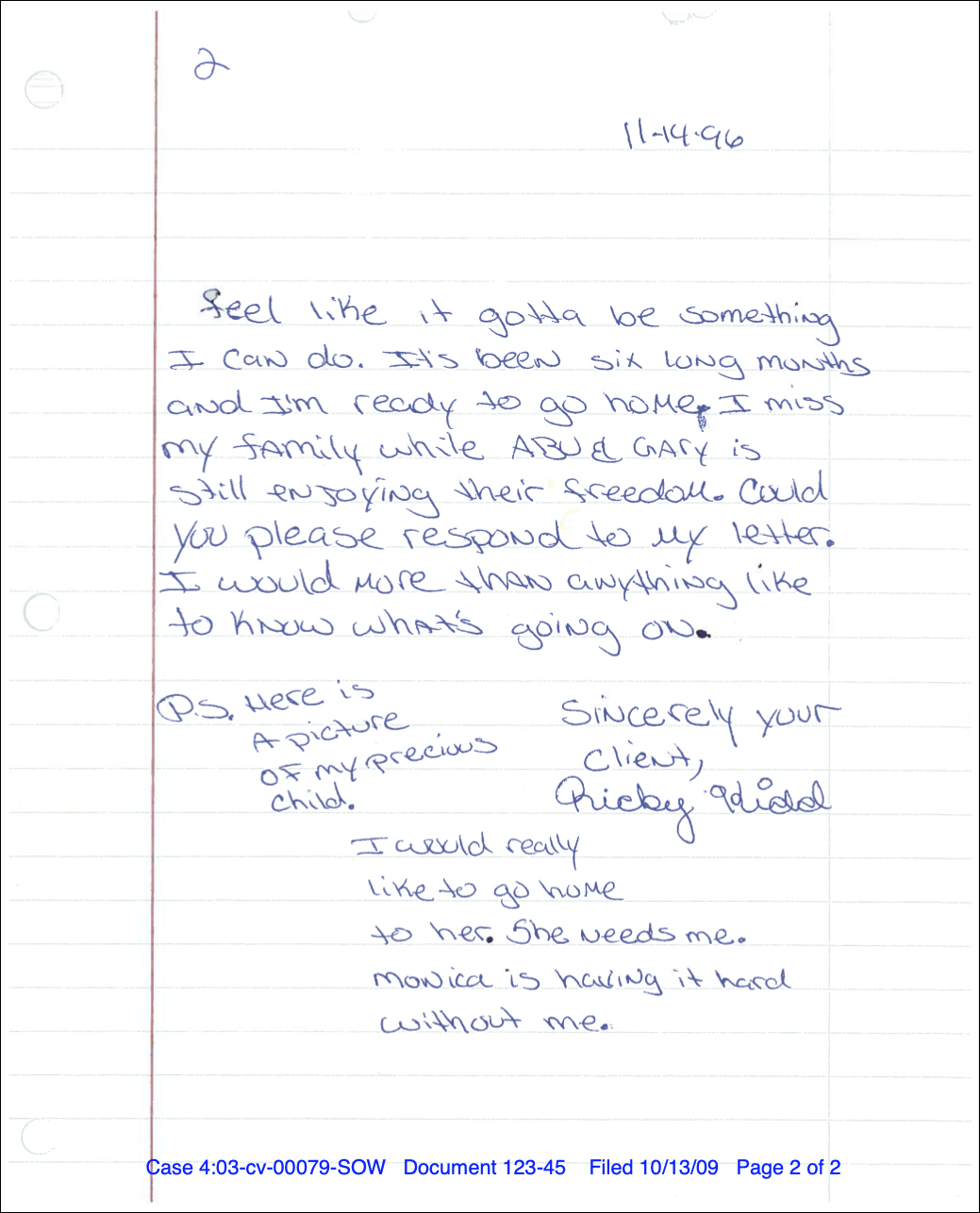