Searchers in California fires step up efforts ahead of rain

CHICO, Calif. — Searchers combing a Northern California town leveled by a deadly wildfire stepped up their efforts Sunday ahead of rains forecast later this week in the fire zone where 76 bodies have been recovered so far.

While the rain would help tamp down the blaze, it could also turn the area into a muddy mess and hinder efforts to find the remains of more victims in the town of Paradise.

Authorities said late Saturday that 1,300 names remain on a list of people who are unaccounted for more than a week after the fire began in Butte County. Authorities stressed that the long roster does not mean they believe all those on the list are missing.

Sheriff Kory Honea pleaded with evacuees to review the list of those reported as unreachable by family and friends and to call the department if those people are safe. 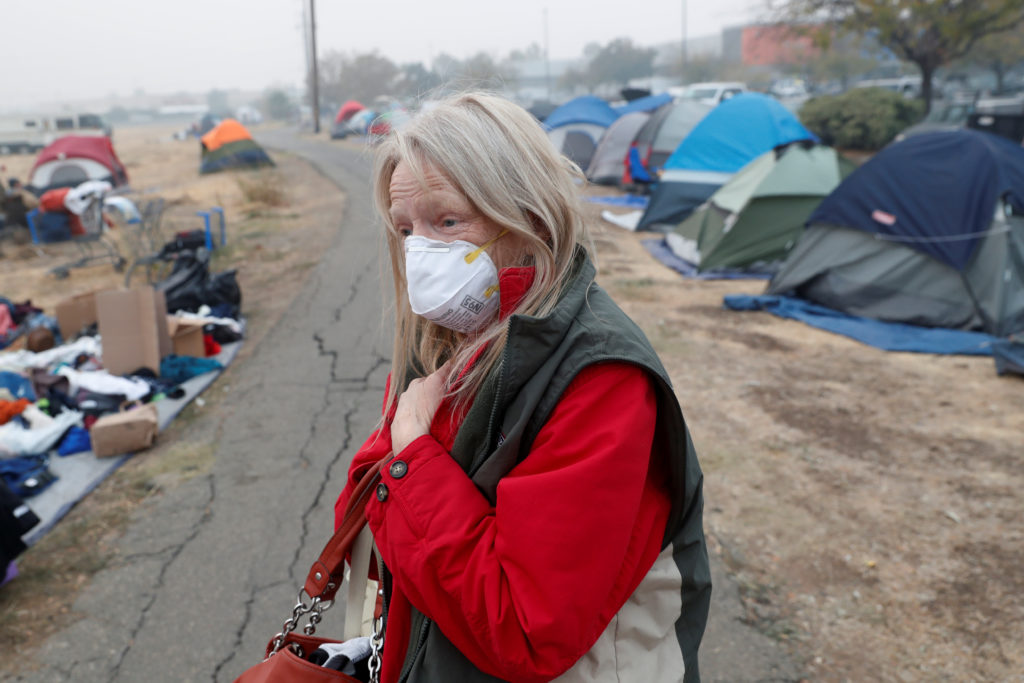 Bridgett Hogan, 57, of Paradise, walks through a makeshift evacuation center for people displaced by the Camp Fire in Chico, California, U.S., November 15, 2018. Photo by Terray Sylvester/Reuters

Deputies have located hundreds of people to date, but the overall number keeps growing because they are adding more names, including those from the chaotic early hours of the disaster, Honea said.

“Anytime you add a new element — rain, wind, all those kinds of things — you start disturbing things, spreading things around,” Honea said Saturday. “As much as I wish that we could get through all of this before the rains come, I don’t know if that’s possible.”

Honea said it was within the “realm of possibility” that officials would never know the exact death toll from the blaze.

Hundreds of search and recovery personnel from around the state are working to find remains, going to homes when they receive tips that someone might have died there. 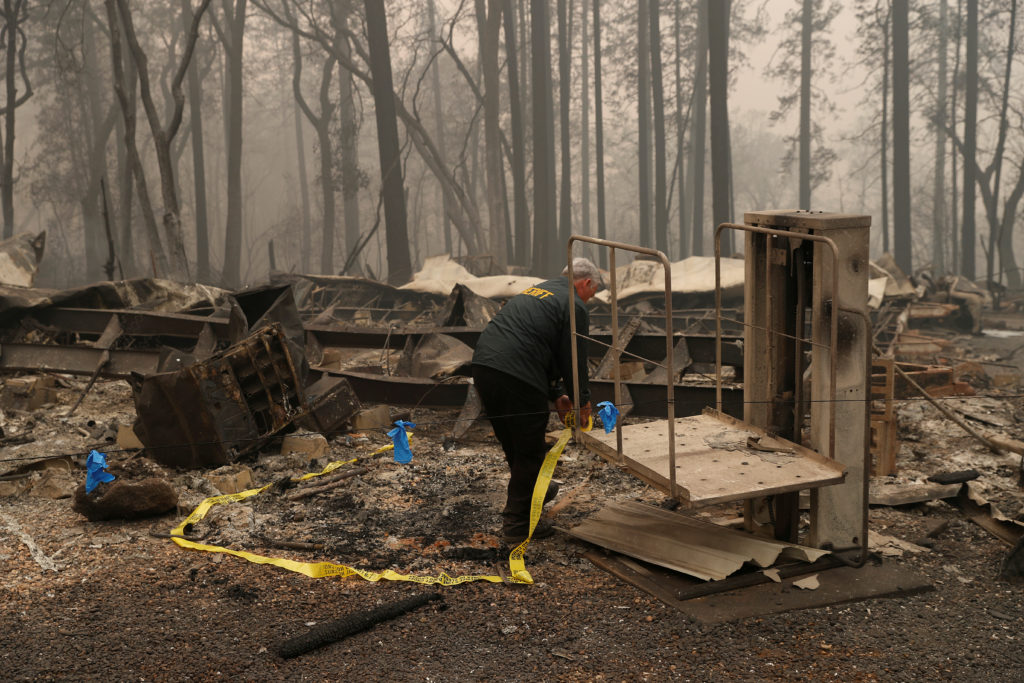 A Butte County Sheriff deputy places yellow tape at the scene where human remains were found during the Camp fire in Paradise, California, U.S. November 10, 2018. Photo by Stephen Lam/Reuters

But they are also doing a more comprehensive, “door-to-door” and “car-to-car” search of areas, said Joe Moses, a commander with the Monterey County Sheriff’s Office, who is helping oversee the search and rescue effort.

The search area is huge, Moses said, with many structures that need to be checked.

The fire also burned many places to the ground, creating a landscape unique to many search-and- rescue personnel, he said.

“Here we’re looking for very small parts and pieces, and so we have to be very diligent and systematic in how we do your searches,” he said Friday.

The remains of five more people were found Saturday, including four in Paradise and one in nearby Concow, bringing the number of dead to 76.

Among them was Lolene Rios, 56, whose son Jed tearfully told KXTV in Sacramento that his mother had an “endless amount of love” for him.

President Donald Trump toured the area Saturday, joined by California’s outgoing and incoming governors, both Democrats who have traded sharp barbs with the Republican administration. 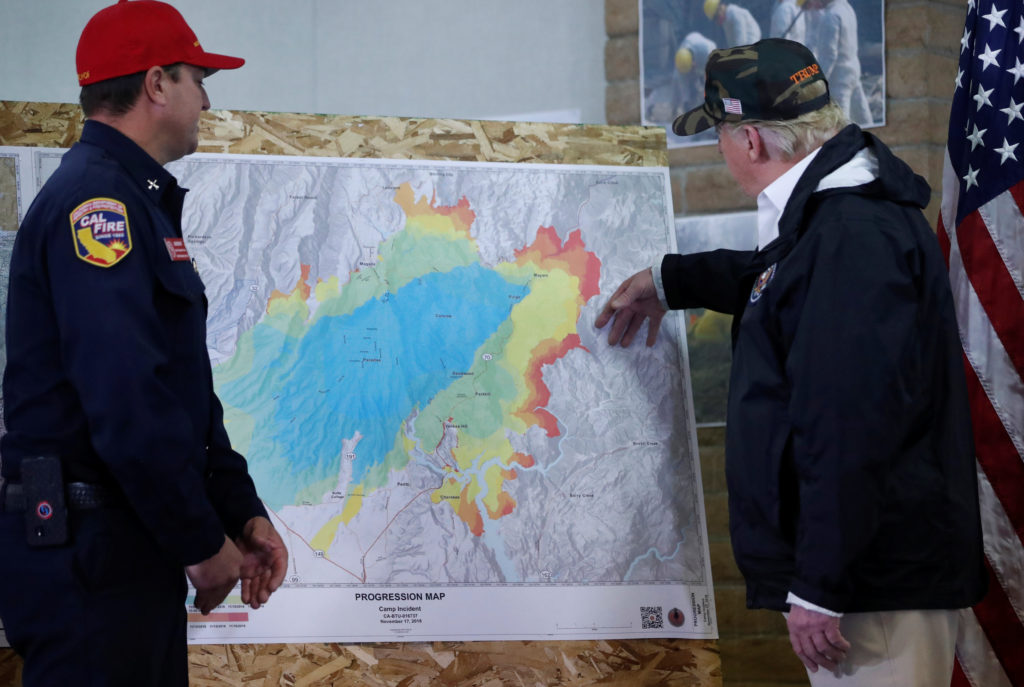 The president also visited Southern California, where firefighters were making progress on a wildfire that tore through communities west of Los Angeles from Thousand Oaks to Malibu, killing three people.

Soon after the fire began, Trump blamed state officials for poor forest management and threatened to cut off federal funding.

“He’s got our back,” outgoing Gov. Jerry Brown said Sunday on CBS’ “Face the Nation.”

“There have been some back and forth between California leaders and the president,” Brown said. “But in the face of tragedy, people tend to rise above some of their lesser propensities. So I think we’re on a good path.”

He also suggested California’s severe wildfires will make believers of even the most ardent climate change skeptics “in less than five years,” and that those living near forests might need to build underground shelters to protect them from fires.

Rain was forecast for midweek in the Paradise area. The National Weather Service said the area could get 20 mph sustained winds and 40 mph gusts, which could make it hard for crews to keep making progress against the blaze.

Honea expressed hope that Trump’s visit would help with recovery, saying the tour by the Republican president and California’s Democratic leaders “signals a spirit of cooperation here that ultimately benefit this community and get us on a path toward recovery.”