Asking for help at 80 — America’s new faces of hunger

NAPLES, Fla. — The warm sands and tony neighborhoods surrounding this retirement refuge are known as Florida’s “Paradise Coast.” But for seniors struggling to keep food on the table, it’s far from a paradise.

Seniors who go hungry in Naples are indicative of the problems facing seniors nationwide. In 2013, the last year for which data is available, 15.5 percent of America’s seniors — roughly 9.6 million people — faced the threat of hunger. Personal illness, family financial trouble — especially following the recession — or losing a spouse add to the problem. When mortgage payments and medicine are a priority, there is not always money left for food.

Tonight on the PBS NewsHour, watch a full report on seniors and hunger. We reported from Naples, where we met several people who were willing to share their stories with us. 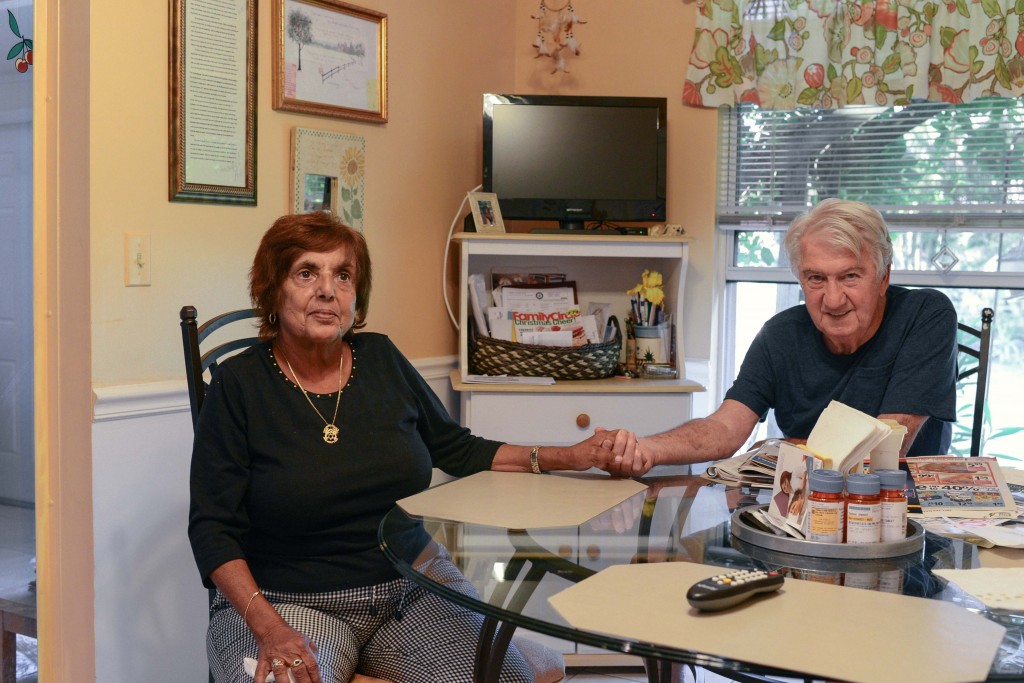 Harry Knight was a jeweler and the main breadwinner of the family before he and his wife Sarah followed their daughter to Naples from New Jersey. Photo by Ariel Min/PBS NewsHour

Harry and Sarah Knight, 76 and 75, moved to Naples 14 years ago after selling their house in New Jersey. Harry found a job at Publix grocery store, which helped make ends meet. But things started to crumble when Sarah’s numerous health problems — Crohn’s disease complicated with a string of other ailments, like giant cell arteritis, polymyalgia and fibromyalgia — began to drain them of their funds. Then, Harry got fired after a verbal clash with his manager.

Now, the Knights budget about $100 for food each month. They receive about $17 worth of food stamps per month and the rest they receive from Jewish Family and Community Services of Southwest Florida, a local organization that provides food, services and activities for seniors in the region.

“If it wasn’t for the [JFCS], we’d be starving,” Sarah said. JFCS provides them three gift cards with $25 on each every month, which they can use to purchase necessities other than food. 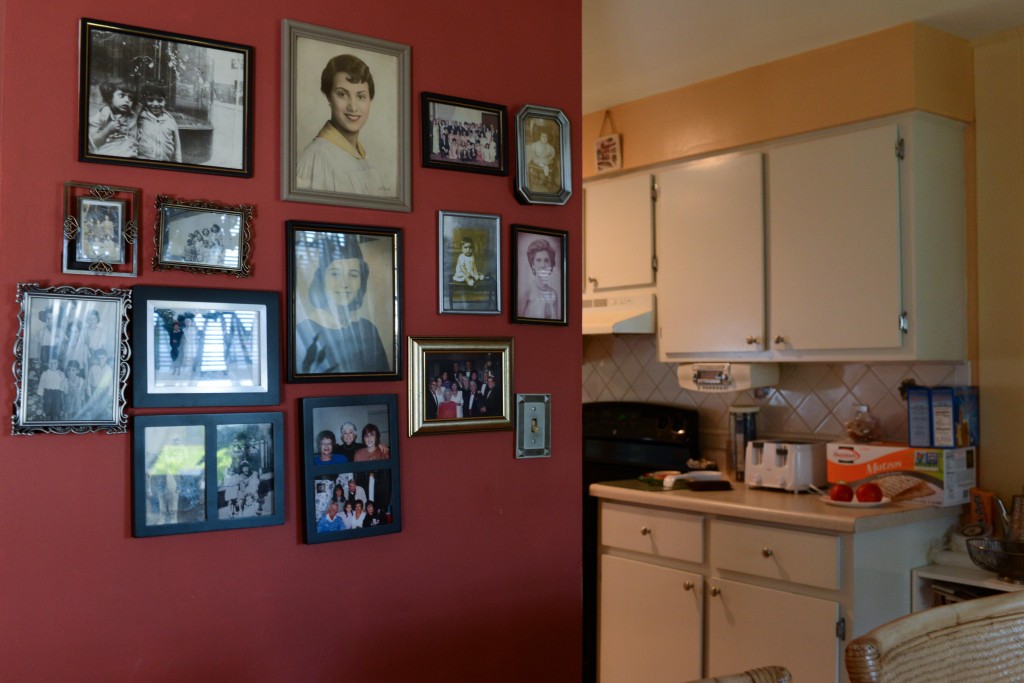 Photos of family and relatives cover the walls of the Knights’ dining room. Photo by Ariel Min/PBS NewsHour

Even with the help, they’re still $700 short on their monthly budget, a large part of which is for medicine for both Harry and Sarah need, especially after Harry was diagnosed with early-onset Alzheimer’s last year. Research has found that food insecure seniors are more vulnerable to disability and are more likely to suffer from chronic diseases like diabetes, heart disease and hypertension, which require a healthy diet.

Jaclynn Faffer, president and CEO of JFCS of Southwest Florida, did not foresee this problem, either, when she first opened the senior center. 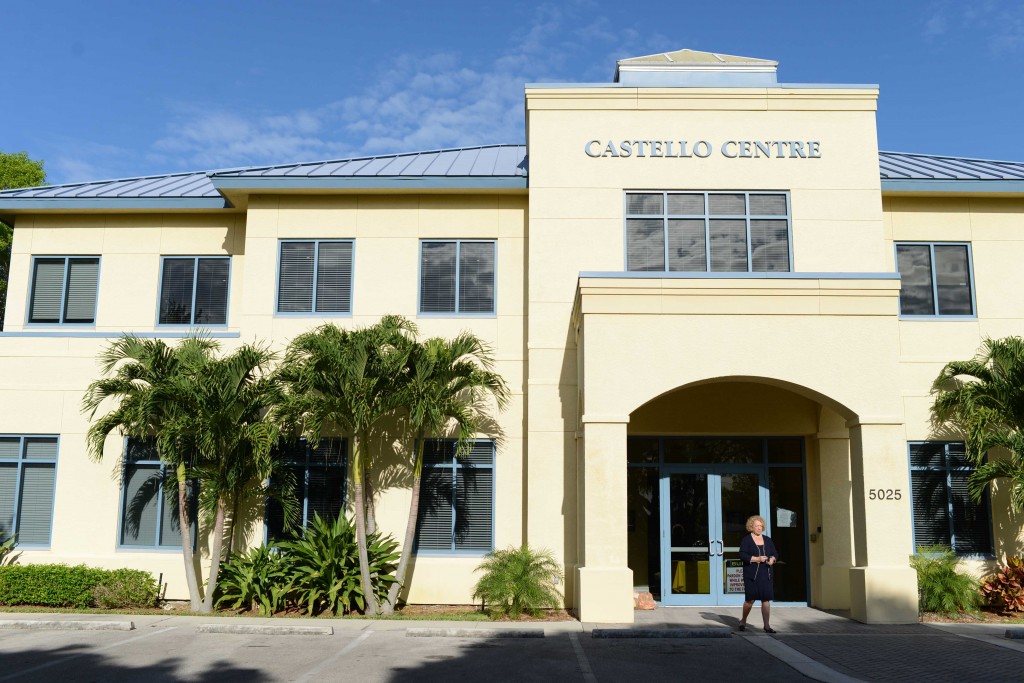 Jaclynn Faffer waits for members to arrive for the Wednesday luncheon at Jewish Family and Community Services’ senior center in Naples. Photo by Ariel Min/PBS NewsHour

“We were surprised to find the significant needs that exist in Collier County, in terms of financial security and food insecurity,” Faffer said, adding that out of their 676 members, about 60 percent are at, near or below the poverty line.

The JFCS senior center also provides grocery deliveries for those who cannot drive or are without a car — another common problem faced by food insecure seniors nationwide. Research has shown that typically, if you cannot drive, it makes it harder to secure affordable food. Among low-income families without a car, 64 percent are food insecure, about twice the rate of low-income families that do have access to transportation. 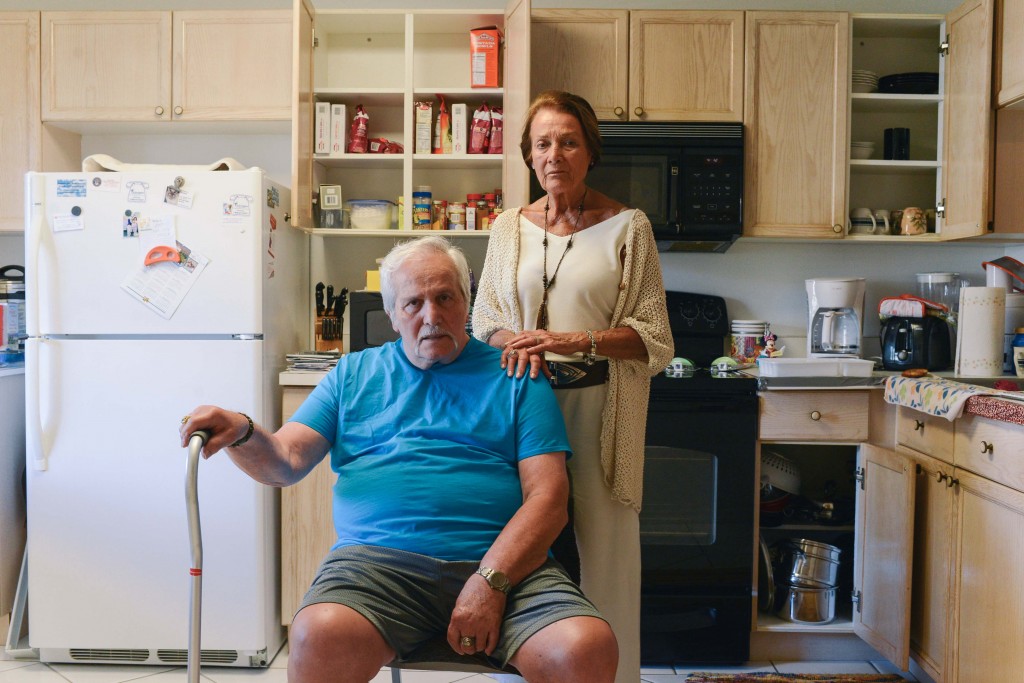 Angelo and Mina Maffucci pose for a portrait in the kitchen of their son’s apartment, where they’ve been living for about five years — since they lost their house. Photo by Ariel Min/PBS NewsHour

Angelo and Mina Maffucci, 82 and 79, are among those who struggle without the use of a car. Not too long after they moved to Naples, they lost most of their savings in the mortgage nosedive and on medical bills for Angelo’s back injury and prostate cancer.

They were able to live in an apartment their son owns, free of rent, but without a car or money, they sometimes went for an entire day with just a cup of coffee. 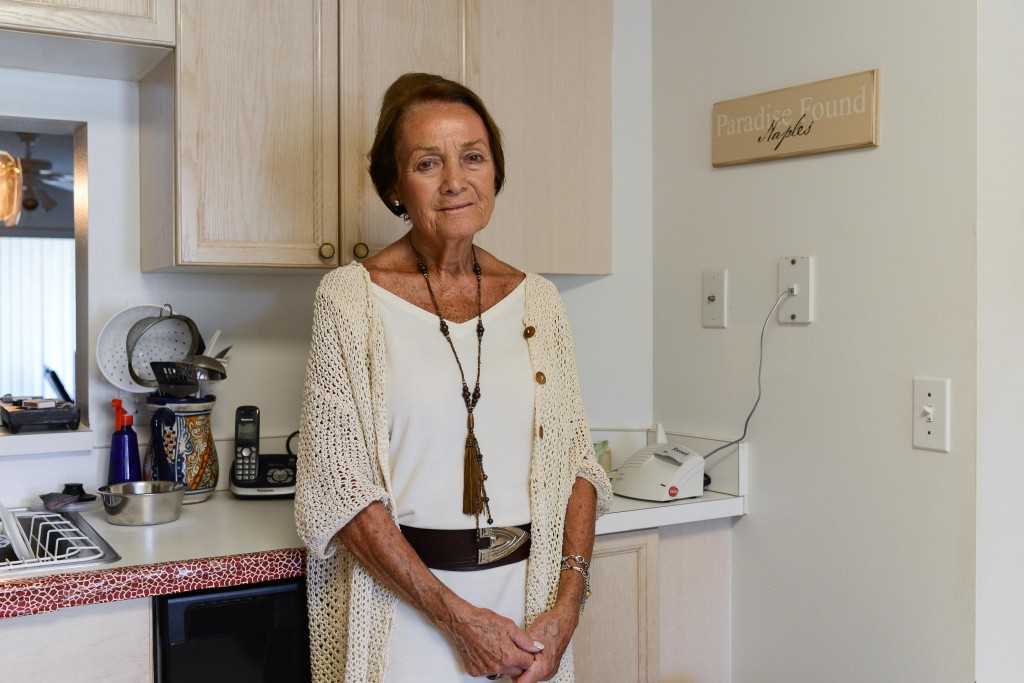 Mina Maffucci says she and her husband Angelo spent a few difficult years before seeking assistance for food. Photo by Ariel Min/PBS NewsHour

“We hated to ask, you know? We didn’t know where to go, because we didn’t … ever have a problem like this before,” Mina said.

Currently, they live on Social Security checks, food stamps, grocery delivery from the JFCS senior center and additional help from their son. 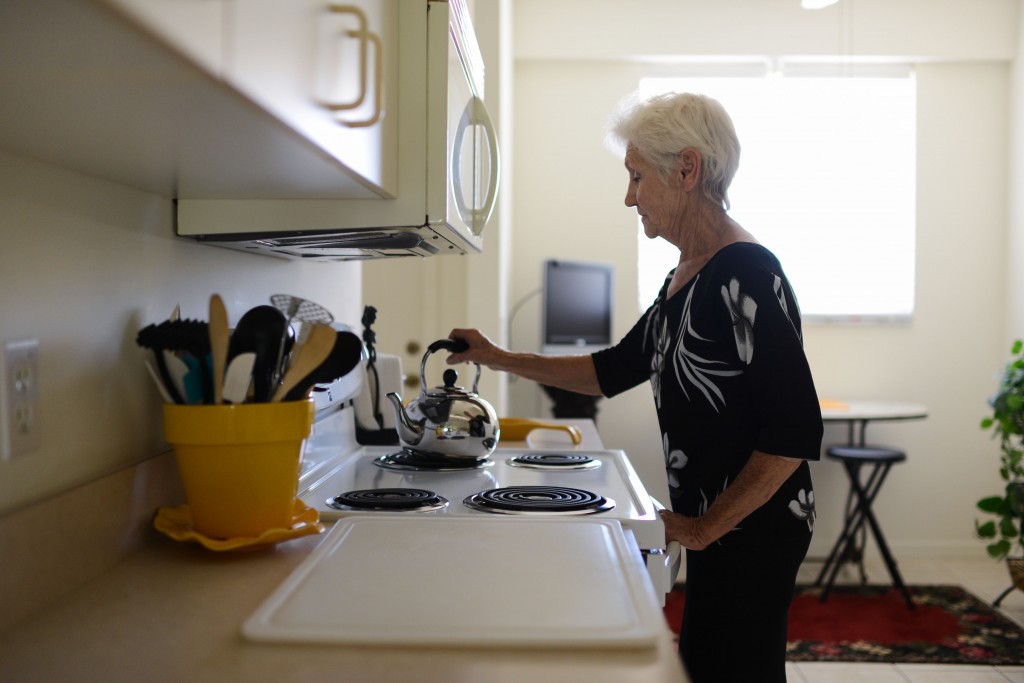 Dorothy Abruzzo’s apartment is impeccably clean and adorned with carefully curated vintage furniture that she has collected over the past few decades, with empty walls completely free of any photos except for one: her parent’s wedding portrait from the early 1900s.

Twenty-four years ago, after her husband died, Dorothy followed her daughter to Naples from Philadelphia. She paid cash for a condo in a luxurious area — Pelican Bay — then had to keep lending money to her daughter who was going through some financial and marital trouble. Dorothy worked a daytime job at a luxury dress shop until she had to go through an emergency carotid artery surgery that left her sick and unable to drive for a while. She was able to recover, but a recent mismanagement of funds by a relative left Dorothy with pretty much nothing, forcing her to rent and live on food stamps. 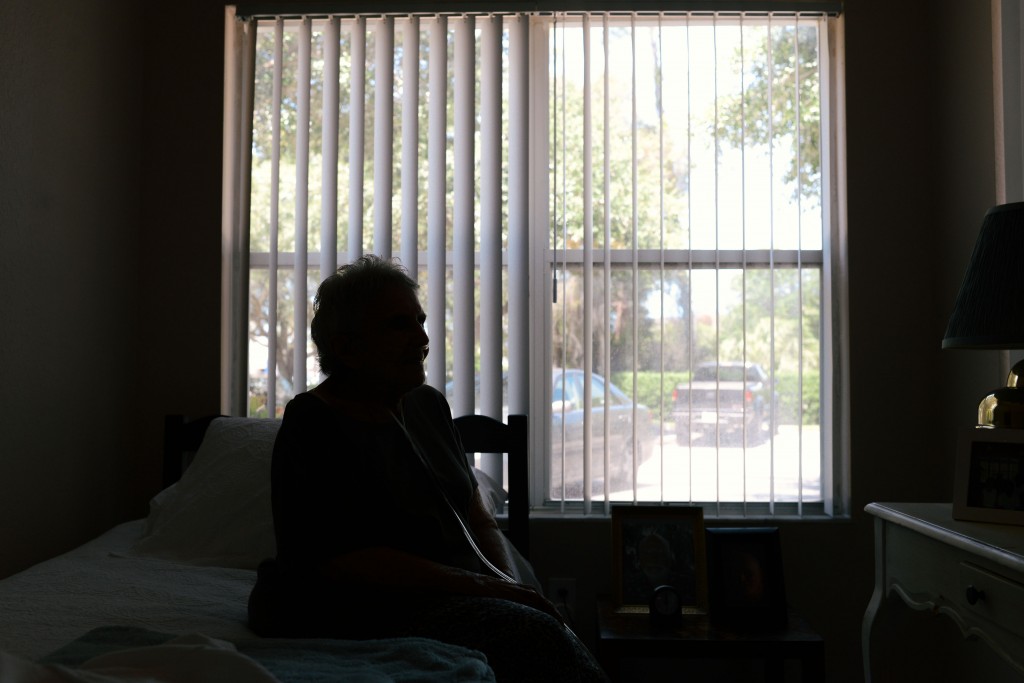 Beatrice poses for a portrait on her bed. Photo by Ariel Min/PBS NewsHour

At 94 years old, Beatrice — a pseudonym, because she wished to stay anonymous — still drives a beat-up, red Pontiac everywhere, even with her lungs semi-permanently in need of oxygen support. She’s always been independent — and still wants to be — but when it comes to food nowadays, that became almost impossible, especially after moving out of her son’s condo after he suffered a stroke.

“You know that [SNAP benefits and supplemental food programs] makes me feel very insecure to even talk about it, because, I [wasn’t] that type at one time. And to get this at 94, and to have these people help, it’s unbelievable.” she said.

On top of her medical bills, Beatrice has to pay the monthly rent of $885 for her efficiency apartment, and she’s worried that the rent will go up in the fall. She receives $70 in food stamps each month and additional help from the JFCS senior center, including grocery gift cards and the food pantry.

“I do everything alone. I go shopping alone, still drive a car. I’m very independent. That’s the thing that bothers me. At one time, I was in control. But the recession has done terrible things,” Beatrice said. 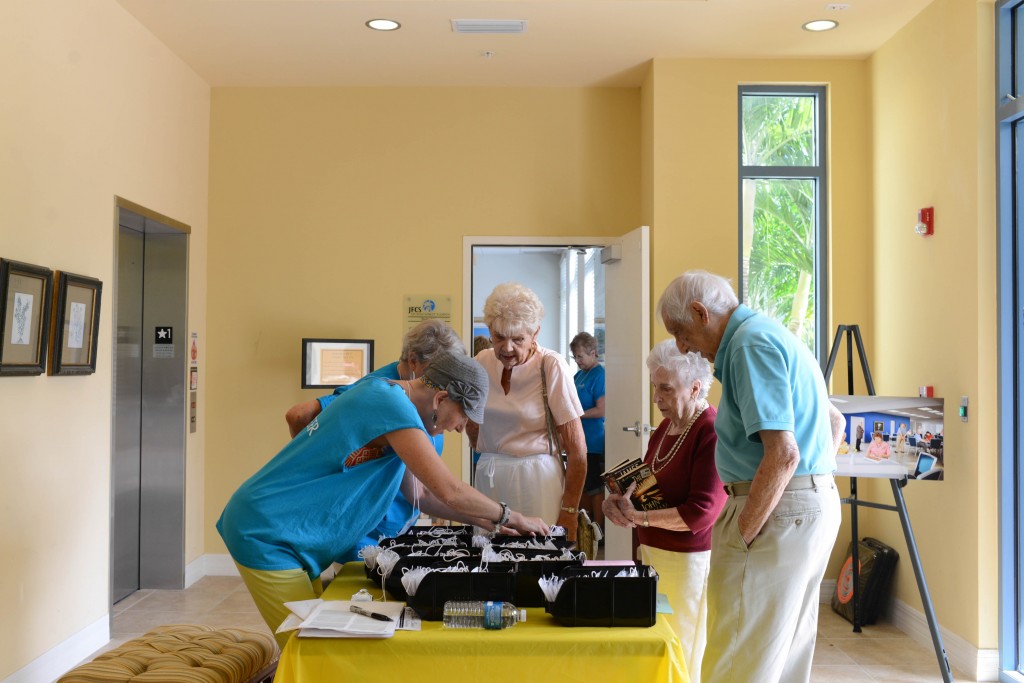 Over the next decade, the number of baby boomers struggling with food insecurity is expected to rise by 50 percent.

Government food programs won’t be enough to serve this population. That is where programs like those offered by Jewish Family and Community Services’ senior center fill in the gaps. But many of these groups nationwide face long waiting lists and worry, too, about the coming need.

“Seniors are living longer, and they’re outliving their incomes,” said JFCS’s Faffer. “And, unlike younger people, who we can help find a job, find more affordable housing, with our seniors, that just can’t happen.”

Left: Dorothy Abruzzo, 83, poses for a portrait in her home in Naples, Florida. "I never in my life thought I would have needed charity." Photo by Ariel Min/PBS NewsHour